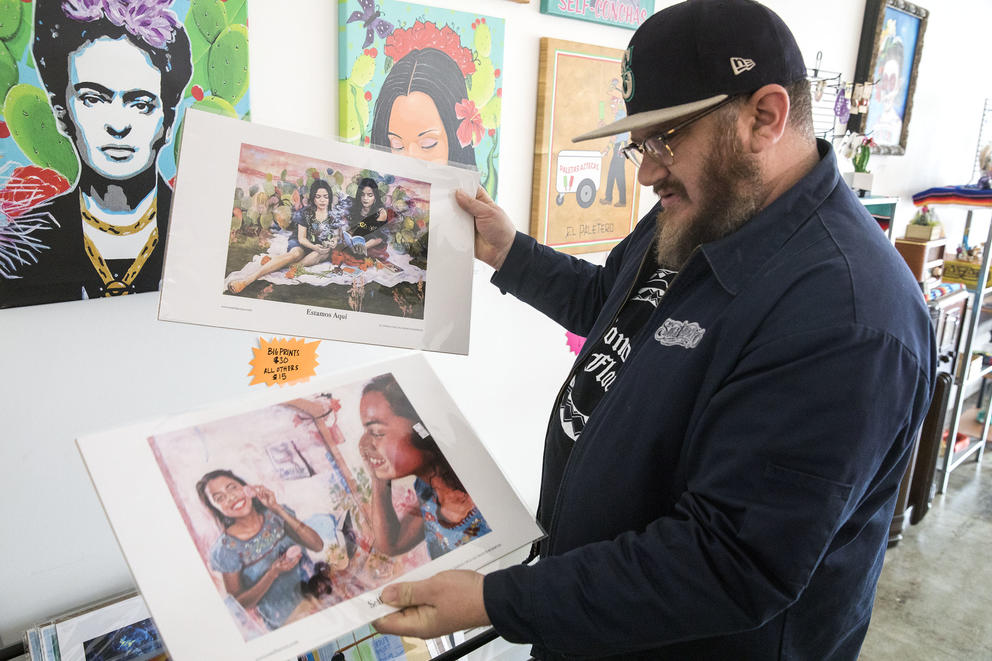 During the Nepantla Cultural Arts Gallery’s opening pachanga, surrounded by corrido music and the fragrances of horchata and tamales, Jake Prendez told a room filled with Latinxs, “This is your space.”

The Nepantla Cultural Arts Gallery, which opened earlier this year, sits in White Center. When Prendez and his partner, Judy Avitia-Gonzalez, went looking to rent a space, they got offers in Beacon Hill and Columbia City, which Prendez said already had great cultural spaces like El Centro de la Raza and Estelita’s Library nearby. They waited for a spot to open further south before settling on a small storefront that's next to a bakery on Delridge Way and now hosts open mics and workshops. Free lectures with local and national artists are also planned.

“It was important to give access to arts and culture and this type of programming because we are part of that community and wanted to stay in the community that did need us,” Prendez said.

“Nepantla” means “torn between ways” in the indigenous Nahuatl dialect, a language from the Aztec empire. But during the 1980s, Chicano scholar Gloria Anzaldua embraced nepantla as a word describing the perspective of marginalized communities living between cultures and experiencing a state of constant change, survival and rediscovery.

Much of Prendez’ life has been in this “in between.”

Prendez, 42, is a self-taught artist. His art was labeled “too ethnic” by art teachers who told him it had “no mass appeal,” according to Prendez, who grew up in Bothell.

He had mostly abandoned making visual art until he was 30, when he met the famed Los Angeles Chicana artist Yreina Cervantez and he picked up a paintbrush again. It was in her class at California State University, Northridge, in L.A., where he completed his first self-portrait.

His paintings feature real people, mostly his friends and family, alongside Aztec and Mayan iconography. A young girl holds a blooming lilly with her indigenous ancestor in the foreground. A woman with thick pinned-up braids and half her face painted as a skull is surrounded by pink papel picado. Almost all of Prendez’ works feel sacred because many of the portraits include nimbus crowns painted behind his subjects’ heads.

Cervantez recalls one of Prendez’ earliest artistic influences being Norman Rockwell, who invoked “slices of so-called American life,” she says.

“It’s interesting [Prendez] was able to take the art of portraiture and … interpret portraiture and daily life in a way that Chicanos and Chicanas and other people can appreciate and relate to,” she says.

Cervantez regards Prendez as an “artivist” — an artist with a social conscience who is creating opportunities for others.

Prendez has been grassroots organizing since he was a student at the University of Washington.

That’s where Seattle City Councilmember Teresa Mosqueda met him; he recruited her to MEChA, the university’s Chicano student organization.

“Growing up in south Puget Sound, there weren’t a lot of Chicanos back then,” Mosqueda said. “So being able to come and find MEChA and understand what Chicanismo meant and find friends … this is what helped me find my identity.”

“At the UW, he had very clear pride in his Chicano roots and you can see that in his art,” said Mosqueda, who has Prendez’ artwork in her office. She showed up to the gallery’s opening in February. “The work he does now resembles our community and gives youth and families, especially women, a chance to see themselves reflected in modern art.“

Prendez’ art has given Latinx people a sense of belonging, said Coté Soerens, owner of Resistencia, a cafe in South Park. Her walls showcase Prendez’ canvasses, which stand out brightly in the tunnel-like cafe.

“When we first opened, people … kind of assumed this was a fancy gentrifying coffee shop,” Soerens said. “[But] because we had Jake’s art up, many people familiar with his art recognized this space as their own.”

Growing up in Bothell, Prendez doesn’t remember seeing many Latinx people, but he does remember the racism.

“There was an aha moment of ‘oh I’m different’ and I didn’t realize that,” he said. “There was this shift. I can do two things: be light skinned and pass and not mention that I’m Mexican or I can be uber Chicano and be super militant.”

Prendez doesn’t remember why he chose to do the latter, but he did. Eventually, he found “a family” in middle school. The group of friends called themselves the “different shades of brown crew” and they defended each other from other students. As they got older, the group evolved and so did their confrontations.

“We walked to get snacks at night at 7-Eleven and four cop cars just cornered us and had guns drawn to our heads, had us face down on the street and said we fit a description of a robbery in the area,” Prendez recalled about an incident that happened to him when he was a high schooler. “The cops were always hassling us like that and we just thought that was normal.”

Prendez and the group eventually formed a gang, he said. He barely graduated from high school and took an interest in college only after his friend said it would be a place to meet girls. But at Bellevue  College, a counselor encouraged him to study and to start a Latinx club because there wasn’t one. Prendez eventually pursued ethnic studies as an undergrad at the UW and Chicanismo and art as a grad student at Cal State Northridge.

“I’m the kid everyone wrote off. That's why I like to work with youth so much in the arts,” he said. His Nepantla gallery hosts a youth art program for Latinx teens in partnership with Northwest Folklife. “I see how much art can be used to deal with teen angst and inner turmoil because that was stripped from me. Luckily I found it.” 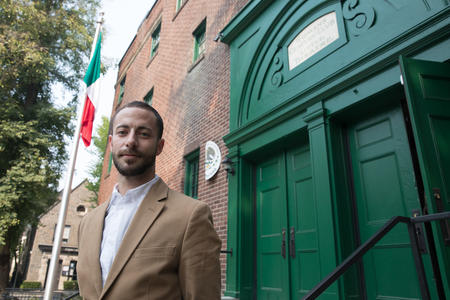 by / August 24
Article continues below