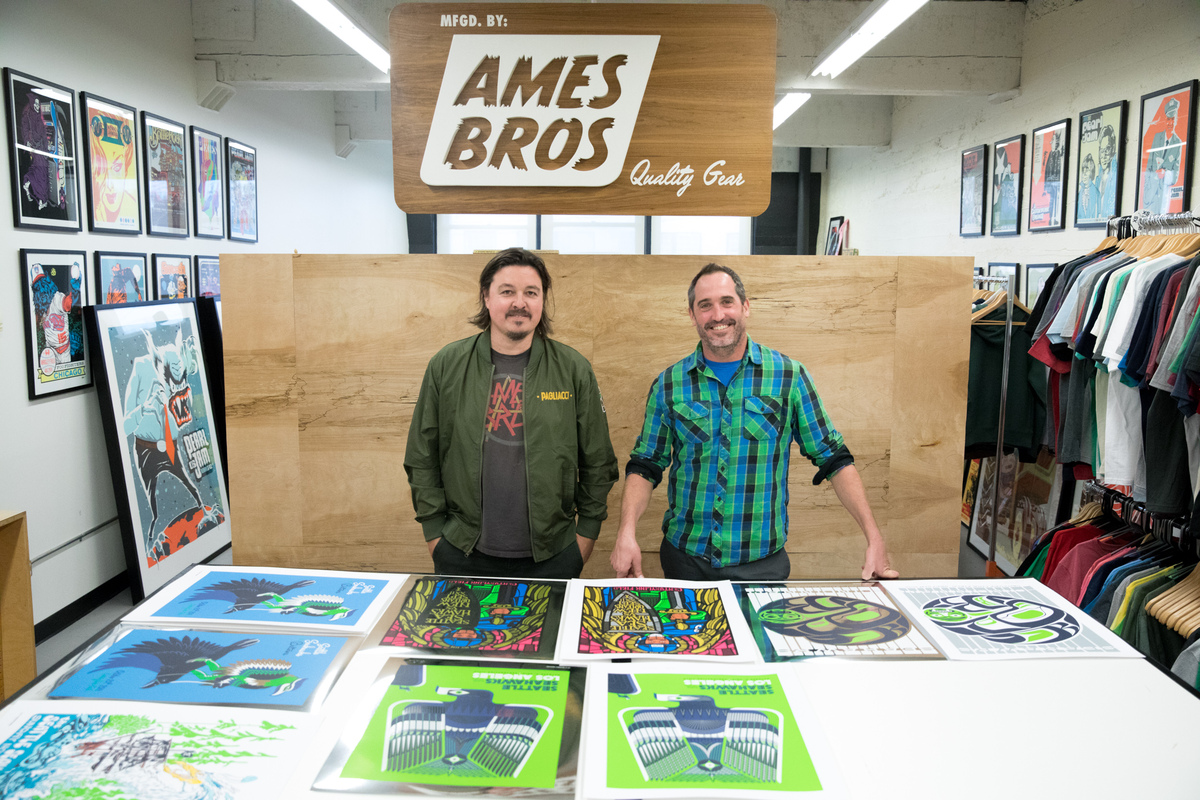 To enter the Seahawks Pro Shop at Centurylink Field is to lose yourself in a blur of blue and green and beaks.

Most everything here is emblazoned with the team’s avian logo (originally copied from a Kwakwaka'wakw eagle mask) — including hoodies, player jerseys, man-cave banners, mittens, tubes of sunscreen, key chains, wine stoppers, flip-flops, golf balls, paper straws and barbecue grill brushes. It's like an Ikea stocked for the 12th man — the sheer number of products may cause a lapse in judgment. (Come to think of it, I do need a Seahawks spatula.)

This season, a few Seattle artists are stepping onto the noisy field of offerings with a new series of one-of-a-kind, screen-printed, game-day posters. In doing so, they offer a decidedly new look for the Hawks and fans.

In one poster, an illustrated Seahawk wearing skinny pants and lace-up high-tops stands astride a Baltimore Raven midflight. The Hawk holds the reins, literally, in what looks like a moment straight out of a fairy tale. Seattle-born artist Stacey Rozich created the scene in her customary folkloric style, sticking to the blue and green palette, though perhaps not regulation hues.

“When I was growing up in Seattle, the Seahawks weren’t really considered ‘the team to watch,’” Rozich says, laughing. “But with Russell Wilson, things have gotten more exciting.” Based in Los Angeles the past six years, Rozich still counts herself a fan, which is why she was especially thrilled to be included in the inaugural game-day poster series.

Initiated by the Seahawks organization, the idea was inspired in part by the emergence of other sports teams selling commemorative game-day posters, many of which emphasize art over aggression. The Portland Trail Blazers, for example, commission local artists to create indie takes on basketball matchups. And since 2015, Seattle’s own Sounders FC has had a regular contest for fans to create “Posters by the People.”

“Our ownership group wanted to bring this idea to the Seahawks,” says Seahawks creative director John Weaver. “We thought, how can ours be a different take? We decided to do a very short run (approximately 200 screen prints of each 18-by-24-inch poster, at $25 each), and make them feel like a piece of art — not just another poster the team puts out.” The team commissioned eight posters (one for each home game of the regular season), each by a different Northwest artist.

To coordinate the artists, the Seahawks drafted Ames Bros, a longtime Seattle illustration and design shop that has created iconic imagery for everything from Pearl Jam posters to Pagliacci pizza boxes. “They are the curators,” says Weaver. "They have great connections and brought in artists with different viewpoints and different vibes.”

At the Ames Bros studio in SoDo, band posters, graphic murals and screen-printed T-shirts splash a kaleidoscope of color across the walls. (Compared with the visual experience at the Seahawks Pro Shop, it’s as if you’ve suddenly sprouted a few more rods and cones in your eyes.) The studio's two founders, Barry Ament and Coby Schultz, have been at it since 1995, art school grads who say they accidentally stumbled into the collectible show poster business.

The duo had seen the indie-flavored posters other sports teams were making and, as Seahawks fans, they wanted to elevate the idea for the home team. With a tight timeline, they reached out to friends and local artists, and also assigned themselves one poster each. “There were some pretty easy calls to make,” Ament says. “Like getting in touch with Jeff Kleinsmith, the creative director at Sub Pop Records, and graphic artist Shaun Wolfe … both of whom have made hundreds of rock posters and we knew had the goods.”

But they also wanted to push beyond their go-tos. “We wanted to get some folks who had maybe never designed a poster, but were incredible artists,” Ament says.

One of those calls was to Preston Singletary, widely known as a glass artist. He designed the first poster in the series, for the game against the Cincinnati Bengals. A Seahawks fan and member of the Tlingit tribe, Singletary is well acquainted with the history of the logo. “I am torn about the use of this image,” he says, “though my biggest wish is that they would have used a Native artist to design the logo in the first place.”

In Singletary's poster, a circle contains two animal figures in Coast Salish form line style. “One of the highlights of Northwest Coast art is that it is subtle and can be abstract, distributive or configurative,” he says. “In this case, the hawk is dominating the tiger.”

As Ament and Schultz spread the posters out on a large table in the studio, the pleasing variety of designs becomes evident — as does the fact that no poster contains the official logo. “The NFL has really strict guidelines,” notes Ament, who says he’s still amazed they approved this project. “That’s why the opposing teams’ names are never on the posters — we have to use the city name instead.”

But other than that, the directive to participating artists was pretty loose. “We told them to use the Seahawks name, a nod to the color scheme, the date of the game and some kind of subtle dominance,” Schultz says. “No blood or guts or busted teeth.”

In the poster Schultz created for the series, playful preeminence comes in the form of an image of Russell Wilson, done up like a stained glass window in a church, with a shield, sword and angelic wings. The opponents during that game were the New Orleans Saints. “The idea is we’re taking what’s theirs and making it ours,” Schultz says. As artful smack talk, it’s pretty effective, though the Seahawks lost that game 33-27.

The possibility of a loss was something Rozich says she thought about when creating her poster. Asked, before the Ravens game, how her image would read if the Seahawks were bested, Rozich said, “Then the Raven will be carrying the Seahawk off to a dumpster.” Indeed it did, 30-16.

Word to the superstitious: There is no correlation between posters and final scores. And, besides, the poster game isn’t about the W’s and L’s. It’s about creating cool works of art that reflect a diverse array of fandom.

“Have you seen our usual posters?” Weaver asks, referrring to the standard Hawks fare. “They’re pretty over the top. Like, FOOTBALL!” he says. “So we’ve already got that covered. But these have interest for people who aren’t diehard football fans. The Ames Bros have a following, and the artists who make the posters have followings.… A lot of artists are fans, too.”

For the same reason, Weaver says (and the Ames Bros attest) that he’s been largely hands off when it comes to approving the designs. “In my everyday life, all I do is be hands on about designs and trademarks and logos,” he says. “So here I wanted to share the artists’ vision.”

The Ames Bros also emphasize the benefits of creative freedom. “We’ve designed hundreds of rock posters over the years and the worst thing you can do is put a guitar or musical notes on a poster,” Ament says. “We always want it to be more about the feeling of the music and the band. We thought the same idea could be applied to an NFL matchup by steering clear of footballs and goal posts.”

In the case of the Rams game poster, the graphic designers at Invisible Creature envisioned a “dive-bombing Seahawk staring down a little ram,” says co-founder Don Clark. (The work of brothers Don and Ryan Clark can be seen in the retro-futuristic mural on the Cinerama theater facade.) He says the geometric pattern of the bird reflects their interest in midcentury modern design and illustration. “We liked how the Seahawk turned out so much,” Clark says, “we were thinking, do we even need the ram?” But the review committee loved it.

The newest poster, for the Tampa Bay Buccaneers game this weekend, is perhaps farthest from traditional Hawks accoutrements so far. Designed by Seattle comics artist and illustrator James Stanton (of Gnartoons), it depicts the Seahawk as a cartoonishly crazed creature of the deep about to capsize or chomp Tampa Bay’s galleon. The image is clearly more funny than fierce, and reflects the Ames Bros’ desire to have the posters be as much for children as adults.

“We really pushed for this to be art for kids,” Ament says. He recalls growing up in small town Montana, where funding for arts programs was eliminated. “And it’s happening here, now, too,” he says. “But it’s so important to learn to be creative, no matter what you want to be.” The Ames Bros and Weaver all mention receiving emails from art teachers happy to have the posters as examples of “real-world art” their students can appreciate.

Kids are benefiting from the poster project in another important way. All proceeds from sales go to The Creative Advantage, the arts equity program for Seattle Public Schools, to fund arts education and basic things like art supplies. Tina LaPadula, arts education project manager of the Seattle Office of Arts & Culture says she was “floored” when the Seahawks reached out about making the donation — which will total more than $10,000, considering all posters have sold out to date, with three more yet to touch down.

“We’re so used to pleading and making the case for why arts education is critical,” LaPadula says. “This project works on every level — it supports local artists, artistry and arts education. It excites me that the Seahawks get it … and it makes me proud of the team and our hometown.” Spoken like a true fan.

To Score a Poster

These limited edition posters sell out quickly, so to secure one of the three designs yet to be revealed you must keep your eye on the ball. Posters go on sale online the Monday before each home game. Watch the Seahawks Twitter and Facebook feeds for the big reveal, and place your order here. In addition, 12 “platinum” editions of the posters (printed on reflective mirror board) will be auctioned to the highest bidders on the day after the game (log into the auction site here). Good luck and go hawks!