A coalition of more than 2,000 film and music professionals say they feel like an afterthought in the city’s plans. 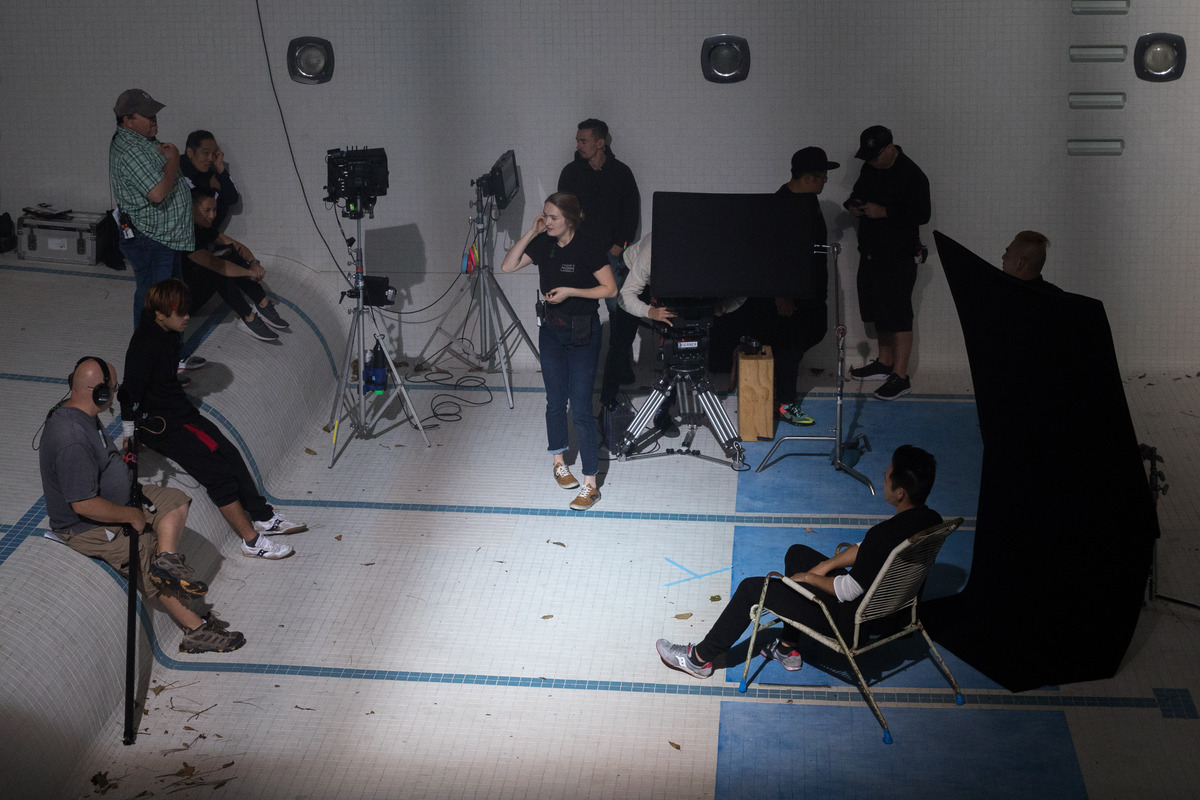 Crew members prepare to shoot a scene for ‘The Paper Tigers’ set at an empty pool in Shoreline, Aug. 22, 2019. (Matt M. McKnight/Crosscut)

Barely any sunlight passed through the curtained windows of the basement room at Langston Hughes Performing Arts Center, where five dozen people sat around round tables. The coffee in the stainless steel pot had dwindled significantly.

Though the scene on Wednesday looked like any dull afternoon meeting, the guest list read like a who’s who of the Seattle arts, film and music scene: at the microphone, Priya Frank, Seattle Art Museum’s associate director for community programs; among the seated, Amy Lillard, executive director of Washington Filmworks, and KEXP DJ and education coordinator Sharlese Metcalf. It was the finale of six months of research, roundtables and city-commissioned reports meant to take the pulse of Seattle’s “creative economy.”

That process kicked off in March, when the city’s Office of Arts and Culture, Office of Film + Music and Office of Economic Development jointly published the results of a study that found that Seattle’s "creative industries” — a concept that includes high-earning tech professionals such as software developers and game designers, as well as lower-income artists — generate nearly 18% of Seattle’s gross regional product (the comparable national figure is 4.4% of the U.S. gross domestic product), but that major disparities in income and representation persist along racial and gender lines.

Those findings form the foundation of the city’s new Creative Industry Cluster Program put forward in September by Mayor Jenny Durkan in her 2020 budget proposal. The idea is that the Office of Economic Development and Office of Arts and Culture will work more closely to grow opportunities for everyone in the creative workforce while addressing its imbalances.

If the Seattle City Council approves the revised budget, roughly 10% of Office of Economic Development’s 2020 budget, or $1.1 million, will be reoriented in support of the new “cluster.”

With that comes a reorganization of the 28-year-old Office of Film + Music, currently a separate office within the Office of Economic Development that advocates for and manages permitting for filmmaking, music events and festivals. The permitting work will continue, with an additional staff member for film and events permitting, but the office will move under the new Creative Industry Cluster Program umbrella.

Instead of hiring a new Office of Film + Music director, the city will conduct a national search to find an “inclusive industry program director” to widen the office’s purview to include graphic design, gaming, virtual reality and augmented reality, and other “creative industries.”

The Langston Hughes meeting — which included members of the Seattle Arts Commission and Music Commission, two volunteer city advisory boards formed in, respectively, 1971 and 2010 — was supposed to be the first step in drafting the outlines of what the Creative Industry Cluster would look like and do in 2020. This included the formation of a Film Task Force that would eventually become a long-desired Film Commission.

While various film professionals sat around a table discussing the industry’s needs and priorities, one segment was notably absent: representatives from the Seattle Film and Music Coalition, a recently formed group representing over 2,000 film and music professionals from various unions. The reason? The group was disinvited from the meeting after publishing an op-ed in The Stranger opposing the city’s plans — which the group says are too vague — just when representatives from the city felt they were patching things up.

This came after a three-week whirlwind of public backlash, letter-writing and pressure on the city council from the Film and Music Coalition.

It all started near the end of a 5½-hour hearing at City Hall in late October, when Melissa Purcell, prop master and northern business agent with IATSE 488, the union representing film, TV and commercial technicians, took the mic.

“Our industry is growing concerned about the proposed change in direction of the Office of Film + Music,” Purcell said. This change, she argued, would “completely transform OFM’s advocacy work that we have worked decades to build.”

Behind Purcell, a dozen members of the Seattle Film and Music Coalition held up pieces of paper featuring a raised fist, and, in large letters: “SAVE the Office of FILM + MUSIC.”

In the city’s view, the Office of Film + Music doesn’t need saving. It maintains that the office is not going anywhere and that the proposed changes amount to a “reorganization.” But Purcell and other union reps fear the industry is being put on the back burner.

The Office of Film + Music, the coalition argues, provided support to a nearly drowning industry. Flawed support, perhaps, but the group says abandoning a dedicated film and music office might send a negative signal from a city that already struggles to attract film business when competing against tax-incentive-aided Portland and the “Hollywood of the North,” Vancouver, B.C.

“This industry in Seattle is bleeding jobs in film and music,” says Doug du Mas, a location manager and Hollywood Teamsters Local 399 member. “Just look at the number of [music] venues we’re losing. [For] film, all you gotta do is look to Vancouver or Portland to see where we fall in between a major film center and a minor film center.”

All the local industry workers are getting in response, du Mas says, is a “bag of magic beans.”

For the Seattle film industry, mistrust of City Hall is nothing new. The industry has long felt like an afterthought in the local creative industry. In fact, “throughout our process over the past five months,” a consultant wrote in a recent, city-commissioned film industry report, “I observed an industry that feels it has been under-valued by the city of Seattle. Seattle’s film ordinance has not been updated in over 25 years, and stakeholders see the city making only minimal investment to support the industry at this time.”

Engstrom, the Office of Arts and Culture director, described Seattle as being at a “structural disadvantage” compared with Los Angeles and Vancouver, which have strong tax incentives for filmmaking and reputations as movie-production meccas.

“So we have to be really innovative about how we support our film industry here,” he said. “And I hope we can earn back that trust.”

The six-month outreach process was intended to do just that. But even though the coalition admits it was part of that process, the group maintains it was blindsided by the reorganization and didn’t really get a seat at the table.

The city disagrees. “I don’t think anybody has … been more centered in the process than the film industries, and particularly labor in the film industry,” said Engstrom, pointing out that the city organized three labor-specific roundtables. “The very first table we had, they literally were at.”

Vivian Hua, executive director of the Northwest Film Forum, helped lead the outreach to the film industry and supports the new Creative Industry Cluster and changes to the Office of Film + Music. She says the city is trying to deliver on what the industry requested, including more staffing and more resources. But, she added, “I think there needs to be more conversation between the city and the film community to clarify points, because some of their concerns are valid.”

Tim Lennon, executive director of Central District arts nonprofit LANGSTON and a Seattle music commissioner who was involved with the city’s outreach process, said the Film and Music Coalition is a “small but vocal group” that does not represent the entire film industry.

Not just because the coalition forms just a fraction of the industry, but also because of its racial and gender makeup: “These particular unions are overwhelmingly white, middle-aged and male,” Lennon said. (Melissa Purcell said she didn’t have demographics of her union, IATSE 488.)

That they are protesting a plan with equity at its heart, even if for other reasons, does not sit well with him.

“Small businesses and Black and POC and queer and trans and youth culture workers have felt the brunt of [the city’s] growth for a very long time,” Lennon told the city council, minutes after the unions had made their case. “We are as underrepresented in economic development conversations as we are in large-scale labor conversations and large local industry unions.”

The city’s new creative economy strategy, he argues, is a way to right those wrongs.

The coalition’s pressure has had an effect. Amendments to the budget, proposed by Councilmembers Lisa Herbold and Kshama Sawant, require that the film and music industry and unions have more of a say in the job responsibilities of the new director and new creative industries policy adviser, and slow the hiring of the latter position down until mid-2020.

But the group’s opposition has also deepened the fault lines between City Hall and the coalition.

Next Friday, Nov. 22, from 6 to 8 p.m. at El Centro de La Raza, the city is convening a “public conversation” with members of the film and music industry to clarify the changes at the office and to begin convening the Film Task Force.

“It's difficult to know exactly how to move forward,” Engstrom said. “But we're going to continue to try.”