10 of the wildest discoveries Washington scientists made in 2019

Here are just a few of the amazing things Washingtonians discovered in labs, in the field and elsewhere that you may have missed. 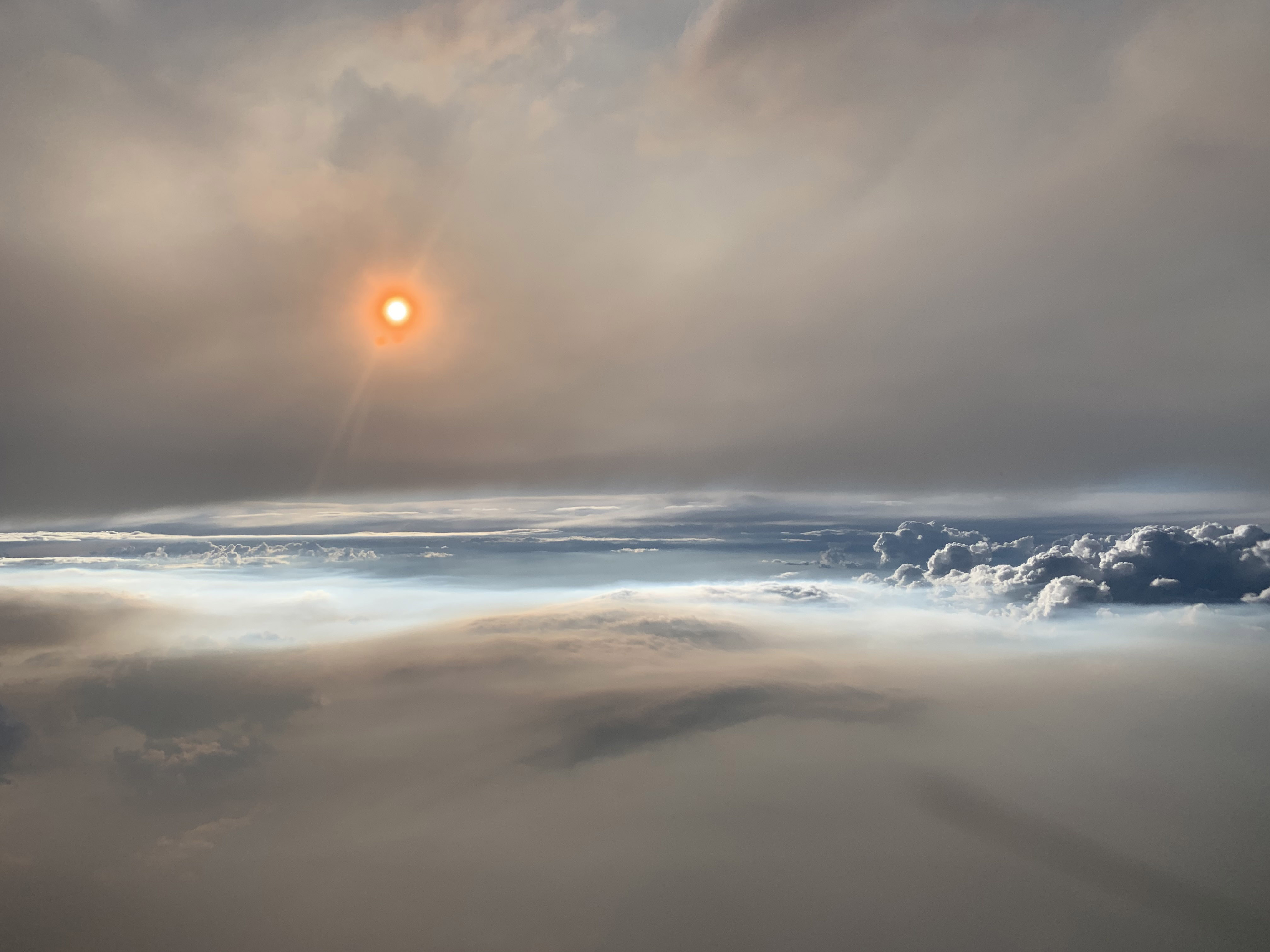 A rare aerial photograph of a fire cloud over the Williams Flats fire in August 2019. (David Peterson/U.S. Naval Research Laboratory/NASA)

This past year saw huge shifts in our relationship with the natural world, from  federal deregulation of environmental policy, to the world backing away from hard-charging global climate-change goals to a growing public fear and distrust of science.

But 2019 was still a year of forward-looking innovation and discovery in Washington. Scientists and researchers — and even everyday Washingtonians spending time outside — have discovered natural novelties and new solutions to a suite of environmental challenges. Those findings are sure to inspire future research and interest in the outdoors well into the 2020s.

Here are just a few of the amazing things Washingtonians discovered in labs, in the field and elsewhere that you may have missed.

What: Over five weeks in the spring, 21 scientists — including Seattle-based NOAA researcher Dr. Laurie Weitkamp — crammed into a Russian research vessel to navigate 345,000 square miles of the Pacific Ocean to net and study ocean-faring salmon. The expedition was part of the International Year of the Salmon, an initiative to better understand and protect dwindling salmon runs.

Why it’s wild: For such an incredibly important and threatened keystone species for the Pacific Northwest, we know surprisingly little about how salmon spend their lives. While they begin and return to spawn and die in freshwater streams here, they spend most of their living years out at sea. Most research has focused on what salmon do closer to home, but this research expedition yielded novel insights that challenge our understanding of how salmon live in the ocean. The researchers tracked the prevalence of different salmon species across the study area, as well as their condition and what they ate, providing a snapshot of salmon activity at one point in time. Certain salmon species they expected to see in great numbers (like pinks) were mysteriously underrepresented; and some species starved (chum) while others fed well (coho) for reasons we don't yet understand.The research is ongoing, but these and many other insights change our conception of the salmon life cycle; better understanding that could help us better gauge species’ health and boost struggling runs — which has implications for orcas, humans and beyond.

2. In August, NOAA and NASA researchers photographed and sampled a fire cloud above the Williams Flats fire.

What: Wildfire danger is growing across the Western U.S., but we still don’t know a lot about how these fires impact human health. When the Williams Flats wildfire hit this summer, “fire clouds” erupted over the Colville Reservation: When wildfires get hot enough, they can lift enough heat and moisture into the air to actually create a thunderstorm. Scientists investigating wildfire smoke’s impacts on air quality and climate change took the opportunity to sample fire clouds from an airplane and take stunning photos of the clouds against a setting sun.

Why it’s wild: Very few photographs have ever been taken of fire clouds from the air. The researchers also took the most thorough-ever sampling of fire clouds on record.

3. With funding from the Suquamish Tribe, hatchery researchers found a way to breed millions of cockles in a hatchery.

What: After tribal members noted decreases in the cockle shellfish population around the reservation, Suquamish biologists partnered with Puget Sound Restoration Fund and NOAA researchers to find a way to breed more cockles in a hatchery, giving the tribe hope for future access to a favorite food.

Why it’s wild: Figuring out how to breed wild-sourced cockles was big, but what made their discovery even more miraculous is that the breeding process had to weather the onset of a contagious clam cancer. With only two weeks to develop a screening method, the team identified and removed infected cockles from the program on the first try.

What: There’s no sugarcoating it: Puget Sound-area rivers are polluted, and we don’t know where a lot of those pollutants are coming from. But researchers at the Washington Department of Ecology developed a novel way to identify pollutant origins from a slimy river resident: biofilm. This mixture of algae and dead organisms coats river rocks in a translucent green layer that makes it hard for us to stand on them. Biofilms absorb drifting pollutants from the water, creating a chemical snapshot of a river checkpoint — kind of like an aquatic customs agent. Analyzing biofilm scrapings for specific chemical signatures on multiple rivers could help researchers trace the path of contaminants, and ultimately identify their source.

Why it’s wild: This in-the-field CSI is helping regulators get closer to identifying the sources of high-priority pollutants (including PCBs, metals, and flame retardants) so that we can better remove them from the environment and improve the health of state rivers.

5. Washington researchers discovered the cleanest air on Earth in the Amazon Rainforest.

What: Researchers from the Pacific Northwest National Laboratory in Richland, Washington, are trying to evaluate the impact of modern civilization on air quality. To do that, they recently contrasted air particle samples from Manaus, Brazil, with those collected via plane from the oxygen-rich Amazon Rainforest. In their analysis, they discovered they’d found air without any recognizable signature of human impact — making it the cleanest air ever discovered.

Why it’s wild: In addition to discovering that humans are producing climate-changing and health-damaging pollutants like aerosols faster than we thought, the researchers created a new baseline for how clean air can possibly be — which gives us new targets to aim for when decreasing pollutants.

6. A geoduck diver discovered a human skull during a routine harvesting dive near Bainbridge Island.

What: While commercial geoduck diver Michael Salter was harvesting underwater off Bainbridge Island, a human skull rolled out of some silt and spooked him.  After sharing the news with his boat crew on the surface, they reported it to the Washington Department of Natural Resources, which took possession of the barnacle-encrusted, jawless remains. Identifying human remains is hard enough on land, but for remains that have likely spent a few years underwater (as this one has), the forensic anthropology process requires marine biology consultation.

Why it’s wild: Enforcement officials and harvesters alike say it was the first time a human skull  appeared during the course of DNR enforcement or shellfish harvesting, at least in recent memory. “I spend a lot of time outside in the woods and whatnot, hiking and fishing, and there's got to be all kinds of stuff out there and I've never thought about it,” Salter said. The skull has yet to receive an ID.

7. A Washington biotech company is successfully curing animal cancer with a radioactive gel.

What: Tri-Cities-based biotech company Vivos discovered a new way to cure isolated cancer tumors with radiation in pets like dogs and cats. Rather than hitting tumors with rays of radioactive light, the team injects tumors with radioactive gel. So far, they’ve seen the gel target and successfully reduce tumors without injuring nearby healthy tissue, like beam radiation does. “If the cancer is spread through lungs and liver and spinal cord and brain, this is not for that,” one of the gel inventors told Crosscut. “But if one needs to treat single, solid tumors, this is just the ticket. It’s the cat’s meow.”

Why it’s wild: These successful pet trials are getting the company steps closer to eventual human trials.

What: In the shadow of a burgeoning anti-flying movement, chemists at WSU found a greener way to power planes while reducing plastic waste. Researchers at WSU developed a way to heat plastic waste to a point where the plastic  transforms into a solution that is 85 percent jet fuel and 15 percent diesel.

Why it’s wild: The process can recover almost 100 percent of plastic from melted-down products. That’s huge for the U.S., which annually produces at least 26 million tons of plastic waste and burns through 17 billion gallons of jet fuel. Plus, researchers say the process can be scaled for bigger facilities than the lab, mentioning diesel-seeking farmers as a possible other demographic.

9. Gray wolves make Western Washington their home for the first time in decades.

What: After being hunted to extinction locally in the 1900s, gray wolves have been rebounding since 2008. Roughly numbering 126 members, the wolf population has historically kept east of the Cascades, where they frequently cause tensions with livestock and ranchers. But this year, one wolf pack finally made the journey west, according to the Washington Department of Fish and Wildlife.

Why it’s wild: As predators, wolves play huge roles in ecosystem management. That the wolves are growing in number and spreading out bodes well for Washington’s ecosystem health and diversity. But conflicts with humans will likely follow, too.

What: WSU researchers discovered that feeding insulin to mosquitoes reduces their ability to infect people with debilitating viruses like West Nile and dengue.

Why it’s wild: People have spent a long time trying to develop vaccines against these mosquito-borne viruses (also called flaviviruses), but researchers realized that we could try to weaken mosquitoes — the vector of disease — instead of trying to strengthen our immune systems alone. Dosing mosquitoes with insulin decreases the amount of virus in their bodies, which means human bodies have to fight less virus per bite, reducing risk of infection.