It’s the last dance for ‘Buttcracker,’ Seattle’s heavy metal spoof of ‘The Nutcracker’

Creators of the irreverent holiday favorite are packing up the spandex and devil horns. 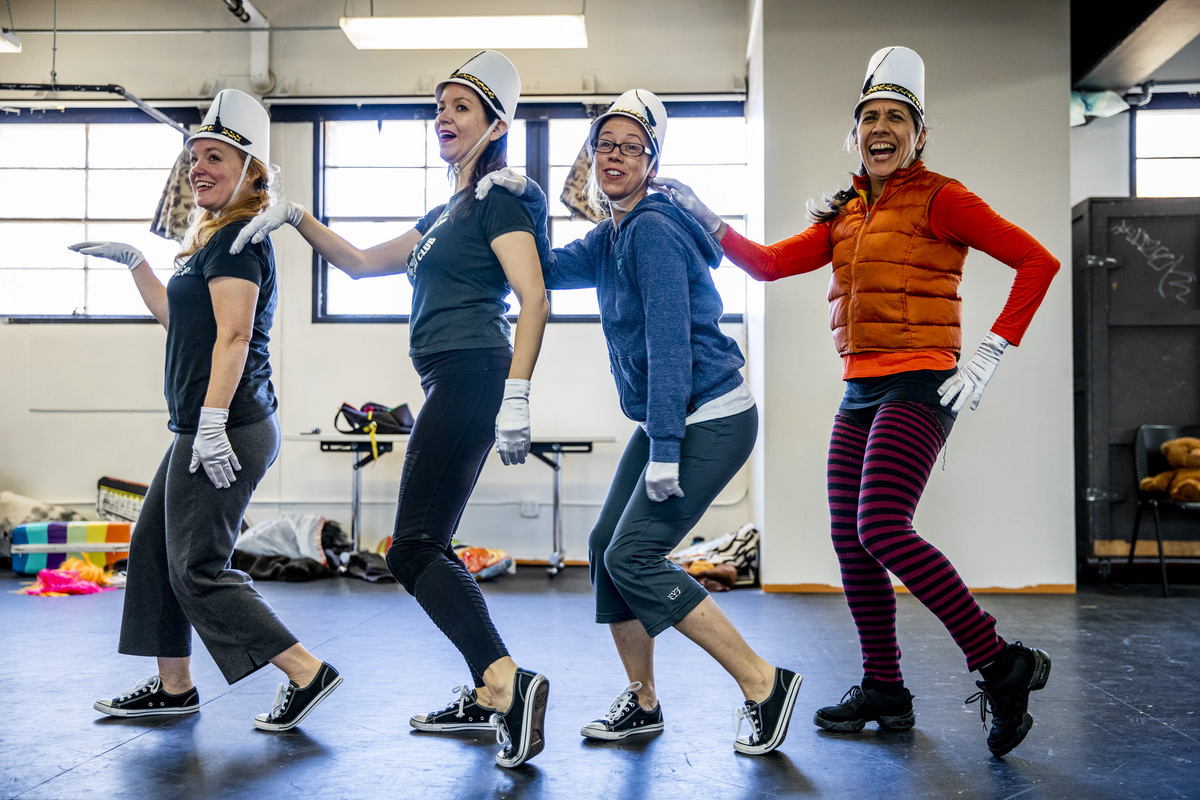 At Wallingford’s Pacific Inn Pub during a Monday night Seahawks game, a man wearing a trucker’s hat and Carhartt jacket seems less than engaged with the football playing out on screen. Between bites of tacos and sips of beer, he occasionally glances up at the TV.

He points to his black hat, embroidered not with the Seahawks logo, but with the word “Buttcracker” in white thread and capital letters.

“He wears it year-round,” says his girlfriend, Carrera Halwachs.

Braunworth’s hat refers to Seattle’s one and only dance event set to 1980s hair metal music, a show of short dance segments he eagerly waits for all year. The irreverent array spoofs classic holiday tales and carols such as The Nutcracker, “Frosty the Snowman” and “Little Drummer Boy.” Choreographers set the dramatic and ridiculous routines to some of the most loved (or most hated, depending on whom you ask) songs from ’80s rock bands. Think Journey’s “Don’t Stop Believing,” KISS’s “I Was Made for Lovin’ You” and AC/DC’s “Back in Black.”

But it’s not all headbanging and crowd surfing. The show blends goofy rock ’n’ roll moves with real choreography by practiced dancers. In one moment, two dancers wrestle over a stuffed bear (a twisted take on Clara’s Nutcracker role), and the next they’re sweeping their legs out and around in an elegant ballet move called a grande rond de jambe.

“We take it very serious and everyone is very talented,” says Diana Cardiff, one of four producers. “It wouldn't work if we were just basically, quote, unquote, ‘wanking off on stage’ to rock ’n’ roll. The reason it works is because people are very committed.”

This year, Buttcracker V: The Last Thrust! will do as the title suggests. On Dec. 19, after five years of over-the-top hairdos (and don’ts), raunchy dance moves and general revelry, producers Cardiff, Sara Jinks, Jana Hill and Matt Mulkerin are putting their brainchild to rest. The four — all established dancers who’ve worked with a range of Seattle companies — met through the local dance scene in the ’90s and went on to produce and perform Buttrock Suites in 2003, a similar show that preceded Buttcracker.

The show is infamous for its rowdy, dedicated fan base and for occasionally setting off the Erickson Theatre’s smoke alarms (a side effect of fog machines).

Among the show’s dancers and producers, Braunworth is known as the “groupie” or “super fan.”

“One year I went seven times,” he says, wide-eyed.

Halwachs says he completely converted her into a Buttcracker groupie as well.

“She was classy like this,” Braunworth says, holding his hand up toward the ceiling, “and I took her down to here.” He lowers his hand down to the table.

Back in 2015, when Braunworth was first invited to the show by a co-producer, he was hesitant to attend. He doesn’t consider himself an “artsy type.”

“Originally I was like, ‘That sounds pretty weird, man,’ but then I went and saw it and was like ‘Holy shit, that’s freaking amazing’,” Braunworth says.

It turns out Buttcracker was a kindred spirit to “the blazer boys,” Braunworth’s own longtime tradition, in which he drives around Seattle on any given summer day in his 1983 Chevy K5 Blazer with a lifted suspension system, blasting hair metal with his friends. They all wear glam mullet wigs and ’80s leather (think Twisted Sister). The same spirit is very much alive in Buttcracker. Like the blazer boys, Buttcracker is “unapologetic,” Halwachs says.

For Braunworth, the holiday season is marked by the start of Buttcracker, but for the cast and crew, Christmas starts months earlier.

Before Halloween, the dancers are already inside a Seattle Center studio, stretching, trying on wigs and counting steps. It’s easy to find the rehearsals, just listen for the heavy guitar riffs and explosive drums from the likes of Motley Crue, Def Leppard or Poison.

But this isn’t the first time the producers have proclaimed the demise of Buttcracker.

“I don't believe it yet; they said that last year,” says dancer Christopher Engelbrecht during one of the first rehearsals.

“It's like the rock band that won’t quit,” says producer Jinks. “How many times have you wished they would have quit and gone out with a bang, but next thing you know you’re still wanting more.”

But this year it’s for real. Producers Mulkerin and Hill (who are married) are ready for new adventures. In February they’ll leave the country on one-way tickets to Belize.

Until then, Buttcracker rehearsals continue — and are a special thing to behold. When Linsy Owen shows up to a rehearsal hungover, instead of a scolding she gets roasted by the rest of the cast.

“Just call it character development to be part of the show,” says duet partner Becca Blackwell, who has been part of the crew since Buttcracker’s inception in 2015.

A shared offbeat sense of humor has helped shape the show throughout the years. (At one recent rehearsal, Snow Miser and Heat Miser improvised a sweet nose nuzzle during a romantic walk, moments before the macabre Krampus drags a chain full of dolls across the stage.)

If an ad-libbed wisecrack is funny enough, producers work it into the choreography. Take Ken Jarvey’s role as the sweeping janitor, a running gag throughout the performance. Much like his role, his presence during rehearsals is like that of Silent Bob’s: subtle but vital.

“Yeah … I don’t talk much,” he says at the end of a rehearsal. Outside of Buttcracker, Jarvey doesn’t participate in any other theatrical productions.

Buttcracker is part dance, part improv, part acting and part party, but above all it’s a chosen-family tradition.

At one rehearsal, Cardiff whips out a photo album to use as a prop, but not before everyone can gaze at pictures of past Buttcracker productions. During another rehearsal, Cardiff gifts Gabrielle Kazuko Nomura (a former dancer, who could not participate this year because of her pregnancy) a tiny Def Leppard T-shirt for her baby. At the final rehearsal, Cardiff brings out fudge with a candle at the center to celebrate fellow dancer Richard Ayres’ 45th birthday (Ayres insisted multiple times it was his 21st).

“Because everybody thought last year was our last, there’s been preliminary grieving going on,” Cardiff says, sitting at a table with the producers after their final rehearsal. “I feel ready.”

Now in their 40s and 50s, the producers know it can be difficult to continue dancing into middle age. Some aren’t sure when or if they’ll dance in other projects. When asked if any of them ever thought this would be the culmination of their dance careers, they all shout, “Hell no!”

“If I think too much about not having this ritual next year, I will start crying,” says Jinks.

“The experience has the good parts of Christmas, the joy, the community — without all the negative parts,” Jinks says. “It’s the pure joy of connecting with other people and being festive and celebrating and letting loose without the heaviness of family drama and dynamics.”

Her voice trembles just a bit.

“It’s like escapism for us, but also for the audience,” she adds.

Cardiff is optimistic. She says the end of Buttcracker gives her room to work on other projects she’s had in mind.

Purchase a six-pack from the concession, crack open a cold one and thrash your head along to some merry Christmas vibes in this one of a kind show. Buttcracker V: The Last Thrust! is at the Erickson Theatre on Capitol Hill, Dec. 13 through 22. ($22)

“I want to do those things before I can’t anymore. If I think about that, it helps me get through it,” she says. “But there will be tears.”

There’s at least one thing to be happy about. This year, the producers have a special treat for their “very committed fan base.” Superfan Braunworth will have a brief cameo at the Dec. 19 performance.

Braunworth isn’t too sad about the final bow. On the contrary, he says he’s sure he can find something new to look forward to. But Buttcracker has changed how he views the holidays forever. He’ll always envision a snowman snorting cocaine when he hears Def Leppard’s Pour Some Sugar on Me.

“You don’t see that every day,” he says.