The problem with expelling an alleged domestic terrorist? He could be reelected. 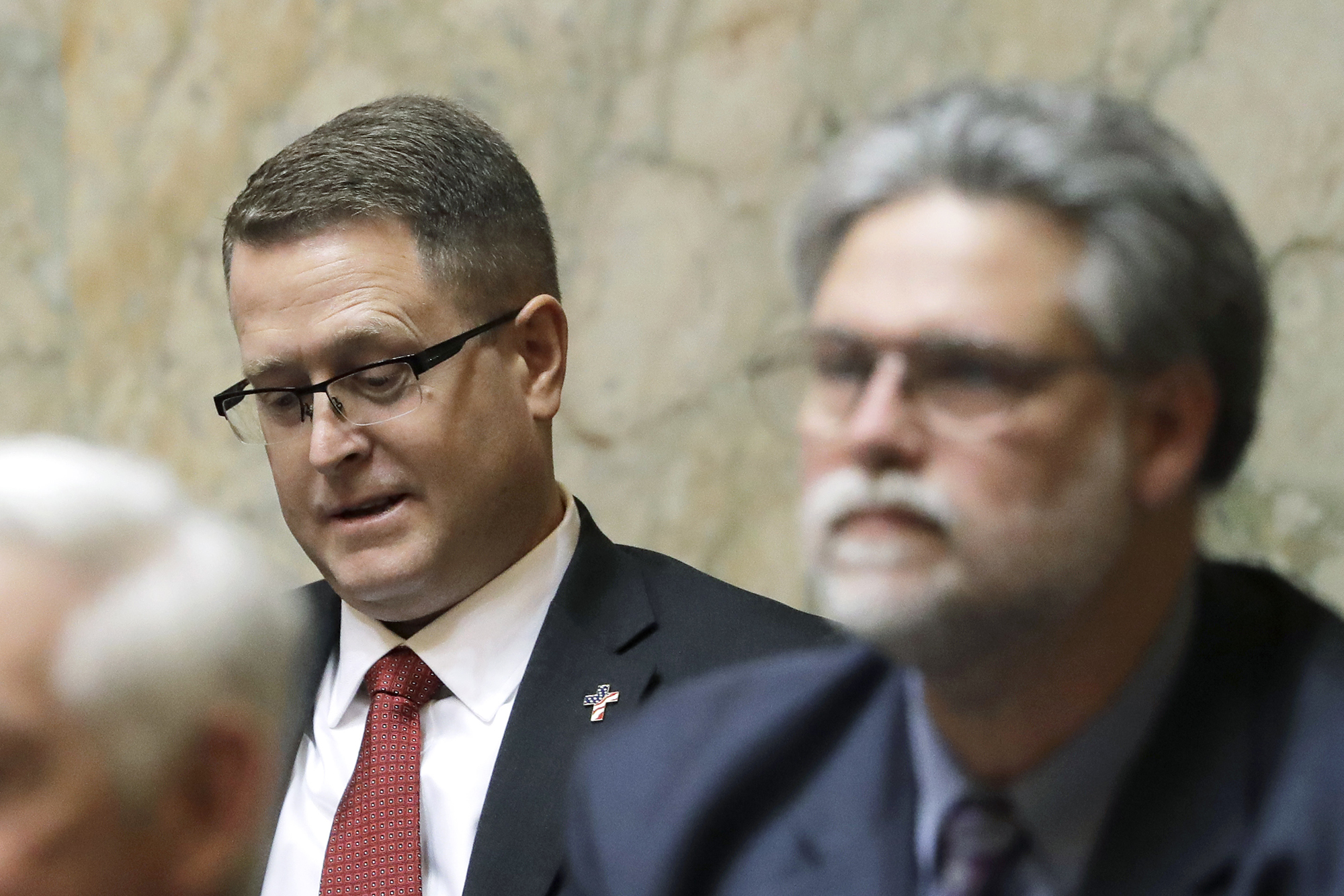 Rep. Matt Shea, R-Spokane Valley, left, sits at his desk on the House floor, Monday, Jan. 13, 2020, during on the first day of the 2020 session of the Washington Legislature at the Capitol in Olympia. The embattled Republican returned to the Capitol on Monday amid calls for his resignation following in the wake of a December report that found he was involved in anti-government activities. (Ted S. Warren/AP)

He looks more like an insurance salesman than a threat to the republic, but Democrats in the state House of Representatives, following the lead of a House-sponsored investigation, say Republican Matt Shea is a domestic terrorist and should be expelled from the Legislature. Expulsion is virtually unprecedented. Only once before in state history has the Legislature ousted one of its own.

The report, budgeted at $120,000, claims that Shea participated in three armed standoffs between local and federal law enforcement in Nevada, Idaho and Oregon, risking the lives of law enforcement personnel. In the Oregon standoff, at the Malheur National Wildlife Refuge, protester Robert “LaVoy” Finicum was killed as he drew his weapon on federal agents.

The report documents Shea’s support of fringe extremist political movements, but that’s hardly a news bulletin. His activism with true believers in the anti-government militia, sovereign citizenship and Christian warrior movements has received ample coverage in local and national media, including Rolling Stone and The Guardian. He has long been considered the most right-wing member of the Legislature.

So alarming was the report by the Rampart Group, run by a former FBI agent, that the Republican leadership in the House tossed Shea from their party caucus, removing him from his Capitol office and publicly calling on him to resign.

As the Legislature went into session this week, Shea, who has represented the Spokane Valley for 11 years, was holding firm, calling the investigation he chose not to participate in “a lie.” He vowed to fight for his job and reelection.

On paper, the bar for expelling a member from the House isn’t terribly high. Article II, Section 9 of the state constitution specifies only that members may be punished for “contempt and disorderly behavior” and that legislators may, “with the concurrence of two-thirds of all the members elected, expel a member.”

But by tradition the threshold for expelling a member is much higher. Scoundrels, mountebanks, drunks, domestic abusers and bribe takers have all served in the Legislature from time to time. In the early ’70s, during a furious argument between two senior Democratic senators in the caucus room, one pulled out a knife, thrust it in the middle of the table and dared the other to go for it. (I heard the story from several senators and lobbyists over the years and finally asked one of the dueling senators whether it was true; he smiled and said it was).

Some legislators have resigned after being arrested or charged with crimes. But the only one expelled was Seattle Democrat Nelson Robinson, who was elected in November 1932. He was convicted of raping a 12-year-old girl the following month, pardoned by outgoing Republican Gov. Roland Hartley, sworn in to office in early January and tossed out days later by a 93-5 vote.

New House Speaker Laurie Jinkins, who has also called on Shea to step down and said he should be expelled if he doesn’t, is being pressed by progressive members of her own caucus to call a vote. Democrats might see this as a can’t-lose proposition. If Shea is tossed, it will require some Republican votes, which would roil and anger some activists on the right. And if he isn’t, you’ve got Republicans on record voting to keep a right-wing extremist in the Legislature, with an election nine months away.

But it’s not that neat and tidy. Unlike Robinson, Shea hasn’t been convicted of anything. He hasn’t been charged with anything. In fact, according to Shea, he hasn’t even been contacted by either the FBI or the U.S. Attorney’s Office, even though both agencies received copies of the 108-page report last month. Evidence in the report includes mostly anonymous comments, phone records (but no recording of their content, and encrypted communications using Shea’s online code name “Verum Bellator” (i.e., Truth Warrior) that he used when messaging militia allies. That’s enough evidence to open an investigation, but it’s a long way from charging someone, let alone convicting him.

Certainly Shea’s politics are odious to the Democratic majority (and plenty of others), but that’s precisely why we have due process — to protect unpopular people accused of wrongdoing. Will majority Democrats respect the civil liberties of someone they don’t like?

The counter to this is that the state constitution doesn’t require a lawmaker to be charged or convicted before removal, and that no private company would keep such an employee onboard. Fair enough. But if the Legislature expels Shea and builds a backlash of sympathy for him — which is already happening — Shea might surf that wave to reelection. The constitution specifies that no member “shall be expelled a second time for the same offense.” What then?

The investigators’ report lays out a narrative that Shea secretly helped plan and orchestrate three armed standoffs, particularly the one at the Malheur National Wildlife Refuge. He then showed up to act as a witness and peacemaker, while sharing information he received as an elected official from law enforcement officers with protesters. If this is all true, then Shea has violated his oath to uphold the law and should be expelled.

How is this all playing back home in the Spokane Valley? The Republican Spokane County sheriff, Ozzie Knezovich, a longtime Shea critic, would like to see him replaced. The Spokane County Republican Party isn’t saying much of anything. And Shea, who is usually reelected handily, has now attracted credible primary opposition from former State Rep. Leonard Christian. (A Democrat, Lori Feagan, also plans to challenge Shea.)

The report contends that for nearly six years Shea has presented a “significant threat of political violence against employees of the federal government and state and local law enforcement officers,” but concedes that there is no evidence that he “presents an imminent direct threat to any individual or group.” Absent that, and any criminal charges, plus the potential issue of double jeopardy, it would be best to let the voters, not legislators, decide Matt Shea’s political future.


Correction: Because of an editing error, a previous version of this article stated that the mayor of Spokane Valley is "sticking up for Rep. Matt Shea" and linked to a story about former Mayor Rod Higgins. The recently appointed mayor is Ben Wick, a moderate and political opponent of Higgins.