'Tiny little wildfires' of infection push the spread faster and death rate higher in some states. 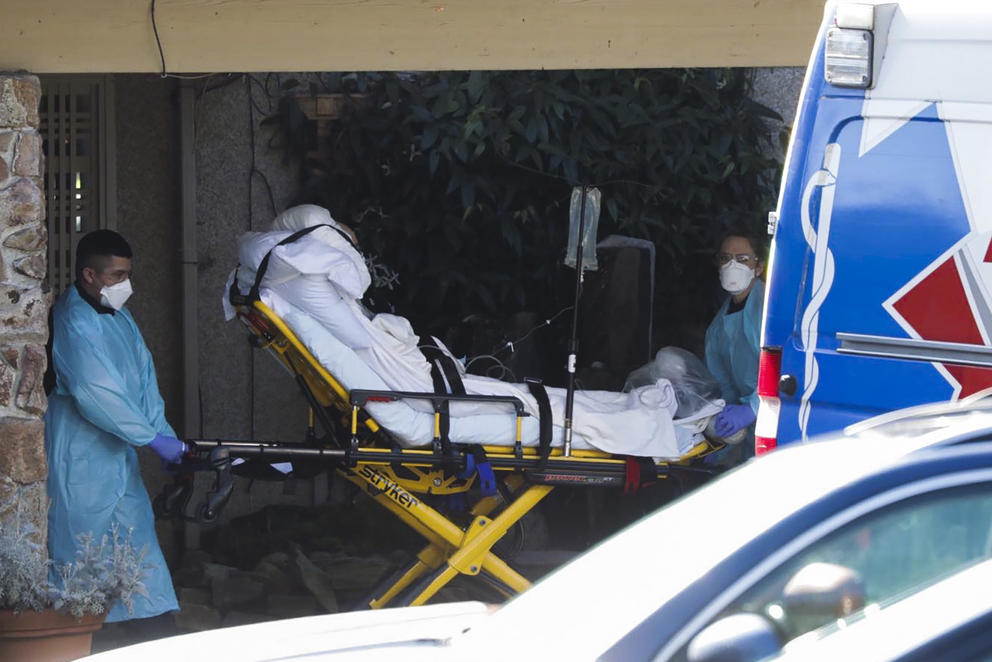 Medical professionals load a patient on a gurney into an ambulance at the Life Care Center in Kirkland, March 9, 2020. (Matt M. McKnight/Crosscut)

Luck and strategy have played an equal part in determining whether the coronavirus hit an individual state or city more like a tsunami or a flood, according to scientists and policy analysts studying the path of the pandemic.

And nowhere have these contrasts been more obvious than in the West, where the impact of COVID-19 has been very inconsistent. The reasons why include international access to and from the state, how long and how broadly the coronavirus had an opportunity to “seed” before the first cases were discovered and how and when state officials responded.

Among Western states, Oregon has had the lowest rate of infection, with British Columbia owning that distinction if national borders are ignored. The highest rate of infection has been in Colorado, closely followed by Washington, Nevada and California.

Nevada sits somewhere in between Oregon and Washington, with 229 infected for every 100,000 people. The death count in California of more than 3,000 is the highest of all the West Coast states, but the rate of infection stands at 207 for every 100,000 people — lower than Washington, Colorado and Nevada. British Columbia, just a few hours north of Seattle, has the lowest rate of infection in the Pacific Northwest, with 53 per 100,000 infected; 143 people have died there, five more than in Oregon.

At a recent press conference, Gov. Jay Inslee hinted at one of the reasons why Washington state might be doing worse than some of its neighbors.

“We were hit first and hardest,” Inslee said. “It’s one of the reasons we took an appropriately aggressive position. Because we did that, we’ve had some considerable success, probably as much, or more, than any of the other states.”

Public health officials point out that one of the first determinants of how serious the pandemic is in a certain area now involves whether the coronavirus had time to seed in that community. Jared Baeten, vice dean of the University of Washington School of Public Health, describes seeding as the virus’ ability to ignite “tiny little wildfires,” which can lead to bigger fires.

“We seeded earlier and probably with more little seeds than Portland,” Baeten said when asked why Oregon seemed to be faring better than Washington state.

Those wildfires make it possible for the virus to spread even farther, although some areas are more likely to see the pandemic worsen quickly.

“The biggest driver of how quickly coronavirus came to different locales is really how well connected those places were to the rest of the world,” Baeten said. “Enormous cities like New York, or just really well airport-connected cities like San Francisco and Seattle, just had earlier epidemics than Boise for example.”

Jeffrey Martin, an epidemiology professor at the University of California, San Francisco, said there was also a bit of bad luck involved in the rapid and deadly toll of the virus in the Seattle area.

“If you were unlucky enough to get this into a few nursing homes, as you did, you’re instantly going to have dozens of deaths,” Martin said.

Another factor determining how well states are doing now with regard to the virus's spread: how early the public chose to practice social distancing, even before governors issued formal stay-at-home orders.

In San Francisco and Seattle, by early March, big tech companies like Twitter, Facebook, Google, Microsoft and Amazon urged employees to work from home, or at least gave them the option.

“It got people thinking about it even before official directives,” Martin said.

Baeten said although Washington and Oregon shut down at the same time, Oregon had the greater advantage simply because the virus had not yet spread as far there.

“I think you'd see Washington, Oregon look about the same if Washington had recognized that there were infections a week earlier,” Baeten said.

Baeten thinks how long the virus had time to unknowingly infect others made a difference within California as well. Because the Bay Area — beginning with tech companies and then with a handful of counties — was first in recommending residents stay at home, Northern California is doing better overall than Southern California, with fewer COVID-19 hotspots.

Public health experts say the makeup of the population in various regions also makes a difference.

COVID-19 has disproportionately impacted Latinos and African Americans for multiple reasons, including that they are more likely to work in essential industries such as health care and the food supply chain. Public health experts say diverse cities like Los Angeles could be hit particularly hard by the pandemic. Washington state is another example: Latinos account for 35% of COVID-19 cases compared with their 13% share of the overall population.

Early testing seems to have been a difference maker in British Columbia. Dr. Réka Gustafson, British Columbia’s deputy provincial health officer, said the province developed a test within three days of China publishing the virus's DNA sequence. By Jan. 20, Gustafson said, the province had the necessary supplies to run a test.

All states seem to be struggling with testing. California has run the most tests to date — more than 1 million — but is by far the most populous state. Washington state has performed nearly 300,000 tests. Oregon, Nevada and Colorado, meanwhile, have all run about 100,000 COVID-19 tests.

In the U.S., the Food and Drug Administration has blocked certain testing efforts that the agency says have not been adequately reviewed. The FDA, for example, recently stopped an innovative home testing program in Seattle backed by Bill Gates. Meanwhile, Gov. Inslee continues to plead with the Trump administration, regularly sounding off on Twitter about the essential test swabs promised but not yet delivered. Washington needs a steady supply of the swabs to continue an adequate pace of testing.

As states acquire the capability for more testing, public health experts warn the picture of where the virus is most active could dramatically change. And no one knows for sure how much the spread could worsen with the reopening of businesses.

Raquel C. Bono, head of Washington state’s COVID-19 health care response team, pointed out that people are only now beginning to see the full brunt of the virus in Latin America, demonstrating that it can take time before certain regions are known to be infected.

“I think it's not easy to make any kind of conclusions this early on,” Bono said when asked why the death toll is higher in certain states. “I think there's going to be a lot of Monday morning quarterbacking when we ever get a chance to look at this.”

Bono said Eastern Washington is of particular concern for the near future, with farmworkers and those who work in meatpacking plants potentially at high risk of contracting the virus now that the federal government has insisted that people with jobs in the food supply chain go back to work.

“While Eastern Washington is probably kind of lagging,” Bono said, “they'll also have the benefit of the lessons that we learned in Western Washington.”

Right now, though, Yakima County has one of the highest rates of infection on the West Coast.

With regard to the future for the rest of Washington state and the four phases of reopening Inslee has detailed, Bono said she hesitates to “say that we'll all be at Phase 2. I think there are certain counties in certain regions that may be at Phase 2. Depending on, you know, how active the coronavirus is in certain areas, we might need to keep them at Phase 1 a little bit longer, just to make sure.”

Inlsee recently announced he would be closely working with the governors of other states — Oregon, California, Nevada and Colorado — to “ensure the virus can never spread wildly in our communities.” Part of the idea behind the so-called Western States Pact is the realization that what one governor does could potentially impact populations living elsewhere.

Inslee explained that the West Coast Pact was more about sharing ideas than “some agreement to do things at the same time.”

“That’s just not practical because each state is significantly different,” Inslee said.

Inslee has said one of the pact’s guiding principles is that science and data, not politics, will determine any modifications to stay-at-home orders, a directive that some might interpret as an indirect criticism of federal officials or state governments pushing for the early reopenings of businesses.

The governor’s office said the West Coast states will continue to push the federal government for the testing supplies needed to develop robust contact tracing and to ultimately pull back on social distancing measures.

“No one state governor in modern times has faced anything like this, so it has been a learning experience for everyone in the pact,” said Mike Faulk, a spokesperson for Inslee.