The state's communities of color now account for larger share of positive tests, due to slow testing, exposure at work and other factors. 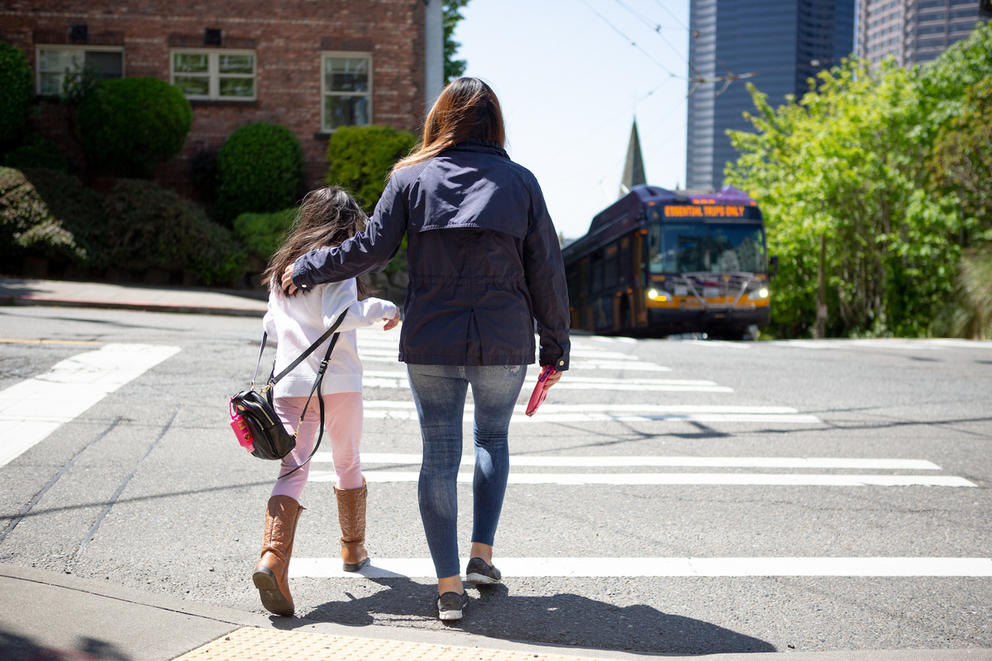 “Luz Alvarez,” whose name has been changed to protect her identity, walks with her daughter in Seattle, WA on Thursday, May 7, 2020. Alvarez fell ill after cleaning the home of a client. Across Washington state, Hispanic and Latino people make up 13% of the overall population but 31% of confirmed COVID-19 cases. (Jen Dev/Crosscut)

A couple of months ago, before the coronavirus pandemic shuttered businesses, Luz Alvarez left the apartment she shares with her daughter at a Seattle shelter to clean the home of one of her clients.

Alvarez, 36, whose name has been changed to protect her privacy, said she knew the woman whose house she cleaned had a history of cancer, but didn’t realize she had also recently been sick with COVID-19 — at least not until it was too late.

Alvarez learned of the woman’s illness as she cleaned the home’s kitchen. She left the house feeling angry and taken advantage of because she hadn’t been warned about the woman’s condition. Days later, Alvarez, like so many other Latinos in Washington state, fell ill with what she believes was COVID-19.

When Washington first began publishing the race of those who tested positive for COVID-19, the state did not initially see the disparities present in other coronavirus hotspots around the country.

In the past month, the proportion of confirmed cases among white people in Washington dropped by 10 percentage points — down to 47%, while making up 68% of the population.

Communities of color, meanwhile, now account for a larger share of positive tests. Black people make up 7% of all cases, despite representing just 4% of the population. Among Hispanic or Latino people, confirmed cases jumped by nearly 10 percentage points since mid-April, to 31%, compared with their 13% share of the overall population.

Health care providers are seeing the shift in real time. The University of Washington previously hosted the bulk of its COVID-19 cases at UW Medical Center - Northwest in North Seattle — near nursing homes and skilled nursing facilities whose populations tend to be more white.

But the center of gravity has moved south, to UW Medicine’s Valley Medical Center in Renton, closer to a more diverse community.

The reasons for the recent shift are likely multiple, said Jeff Duchin, public health officer of Public Health — Seattle & King County, in a recent telephone call with reporters. “Different racial and ethnic groups may differ in their access to testing, in their access to health care or in their health care seeking behavior,” he said. “They may have different risk factors for infection related to the type of work they do, their household size and other exposures in the community. We need to learn more about this.”

One possible reason for the increasing disproportionality is the way in which testing was rolled out. Although limited for the entire population, the tests were even slower to arrive in their communities, say providers who work with underrepresented populations. Residents there are also less likely to have traveled abroad — one of the early conditions for getting tested — or have private insurance.

“We knew that we weren’t having testing done in those populations in the robust manner that we needed to have it done,” said Paula Houston, director of health care equity at UW Medicine. Alvarez, the house cleaner, said she didn’t seek to get tested when she first fell ill because she had heard it was not available.

The possible effect is twofold: an undercount of the number of positive cases and worse tracking of the virus’s spread.

Shoshana Aleinikoff, medical director at Healthpoint Midway in Des Moines, which serves a large Hispanic/Latino population, said early on they were turning away many people because they didn’t meet testing criteria.

Early on, even people with private insurance or good access to health care had some limited access to testing.

“It wasn’t so obvious where people who either didn’t have insurance or had state insurance would go to get testing,” she said.

That access has improved in recent weeks, at the same time new data has started to show disproportionality. Elizabeth Scott, a nurse practitioner at Healthpoint Midway, said there are now enough supplies available that “for the most part if we suspect COVID, then we are wanting to test.” Scott said that includes testing asymptomatic patients.

Scott added that some of the Latino patients she’s seen were already medically vulnerable before contracting COVID-19, with a history of diabetes or hypertension. 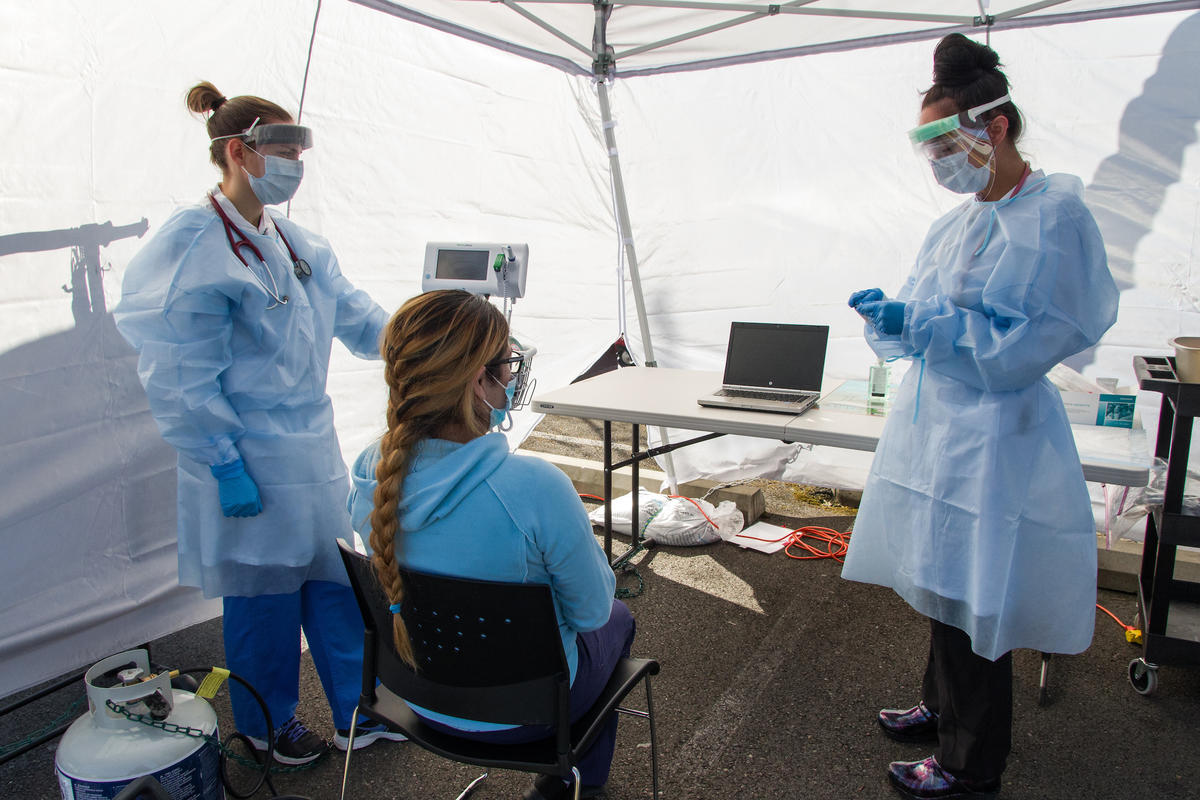 Experts say another reason the virus has hit Latinos hard is that they work in industries that are considered essential or that cannot be done remotely. Also, many may not have employers willing to provide the generous sick leave required to recover from the virus, leaving them anxious about not reporting to work.

Dr. Julian Perez of Sea Mar Community Health Centers, which specializes in caring for Latinos, said about 85% of the COVID-19 patients he sees in White Center are Hispanic.

Many of the clinic's patients work because they don’t have any other option. They have to pay their bills.

“They’re not living in places where the landlords are telling them, ‘Hey, guess what, there's a moratorium on kicking people out,’ ” Perez said, referring to Washington state’s current moratorium on evictions. “Some of their landlords are happy to say, ‘I'm going to kick you out if you don’t pay the rent,’ and they don’t know any better because they’re not up to date on the legal protections that renters have.”

Perez said Latino small business owners also feel the financial pressure to stay open, especially since undocumented immigrants do not qualify for the federal aid available to others impacted by the pandemic. Perez said he’s known of Mexican markets that are up and running but lack signs warning customers to stay 6 feet away from one another.

He and others are working to reach more in the Latino community about taking basic precautions such as social distancing, hand washing and wearing a face mask. Perez said he believes the information may be getting lost in translation because some immigrants have only a basic reading level.

Latinos may also delay seeking medical care, either because they are uninsured or fearful of using public benefits such as Medicaid and don’t want to hurt their chances to become American citizens. But delaying medical care may lead to more deaths.

“Everyone is afraid that if they take any help whatsoever, it’ll count against them on the public charge, and they won’t be able to apply for citizenship,” Perez explained, referring to the Trump administration’s so-called public charge rule, which aims to deny green cards to immigrants who use, or are likely to use, public benefits such as food stamps or Medicaid.

We need to “take care of the vulnerable communities right now, and do it right, or we’ll all suffer,” Perez said.

Aleinikoff of Healthpoint said immigrant communities without health care have the potential to spread the virus not only within their own households, especially when it is common for multiple generations of a family to share one apartment, but also to the wider community.

Due to the lack of state and federal help, more than 400 organizations in Washington state are pushing Gov. Jay Inslee to form a fund similar to the $125 million recently announced in California to support undocumented workers and help prevent the further spread of the coronavirus.

For her part, Alvarez said her illness showed classic signs of COVID-19 symptoms: body aches and a fever. She had trouble breathing and wasn’t able to taste the dishes she would make for her and her 9-year-old daughter, pouring too much salt on the food. But like so many others, Alvarez wasn’t able to get tested at the beginning of the pandemic.

A single mother, Alvarez passed the illness on to her daughter, who eventually tested positive and has since recovered. But Alvarez still wishes she had been warned about being potentially exposed to the virus at work.

“I think employers take advantage of Latinos,” she said in a recent interview in Spanish. “Latinos kill themselves working, and we’re part of this country. But the government doesn't value us as human beings.”

A Center for Public Integrity analysis shows 18% live in multigenerational households in the U.S., increasing vulnerability to the virus.