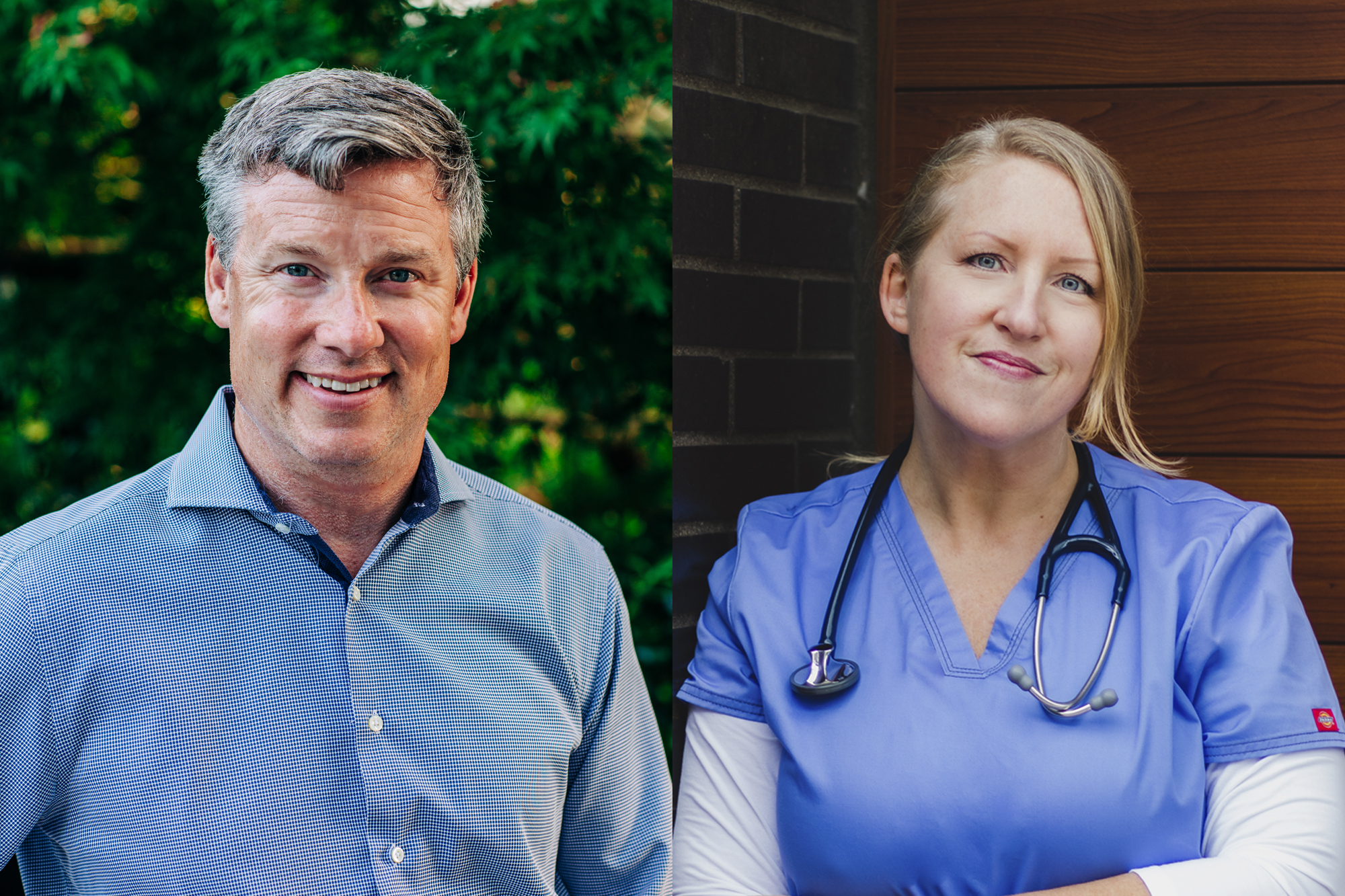 The most expensive legislative race in Washington state this year isn’t between a Republican and a Democrat fighting over which party gets to expand its ranks in Olympia.

It’s an intraparty contest in suburban King County, where a centrist, business-friendly Democrat faces a challenge from the left.

Total spending has already surpassed $900,000 in the race between state Sen. Mark Mullet, D-Issaquah, and Democratic challenger Ingrid Anderson, with a week still to go before the Aug. 4 primary election.

The intense focus on the race highlights some Democrats’ growing frustration with members of their party who won’t support new taxes on businesses and the wealthy.

Mullet, a former banking manager and current small business owner, opposed a tax on big banks last year — one that a trial court judge has since ruled unconstitutional.

Mullet has also signaled he won’t vote for a tax on capital gains. That type of tax, which would apply to profits from selling assets such as stocks and bonds, is one Mullet’s Democratic colleagues have proposed repeatedly in recent years to raise more money for state programs.

By contrast, Anderson, a nurse who lives outside Snoqualmie, has said she supports such taxes. Her campaign website criticizes Mullet for having “vocally opposed many measures of progressive, alternative revenue.”

Debate over a capital gains tax and new taxes on businesses is likely to heat up in the next legislative session, as lawmakers look to plug a budget hole caused by the coronavirus pandemic and the ensuing shutdown of the state’s economy.

“Revenue is a critical conversation — it is the Holy Grail right now,” said Crystal Fincher, a political consultant who works mostly with Democratic candidates. “And these elections will determine what is going to happen.”

The majority of spending in the race between Anderson and Mullet — more than $700,000 — has come from outside groups, which operate independently from the candidates’ campaigns.

The largest single influx of money has come from the political arm of the statewide teacher’s union, the Washington Education Association, which has put up more than $275,000 to support Anderson.

Mullet, meanwhile, is benefiting from about $200,000 in spending by a political action committee called the Committee for Proven Leadership, whose donors include the political arms of the Washington Realtors, Puget Sound Energy, a beverage-industry group bankrolled by Pepsi and the education reform group Stand for Children.

The amount of money flooding the contest in the 5th Legislative District is somewhat surprising, since Mullet and Anderson are the only two candidates running. That means both are certain to advance to the November general election, regardless of the primary outcome.

More spending may still occur later this week in the last days before the primary election.

Among left-leaning and progressive groups, Mullet “has been in people’s sights for a while,” Fincher said.

For several years, Democrats in Olympia have talked frequently about the need to rebalance Washington’s tax code, which relies heavily on revenue from sales taxes. They say that has made the state’s tax system highly regressive, meaning that low- and middle-income people pay a higher percentage of their income in taxes than the wealthy.

Yet, even after the 2018 election, when Democrats padded their majorities in both chambers of the Legislature, progressive tax reform proposals have failed to advance.

The pandemic — which has caused unemployment to skyrocket and state revenue projections to drop by $8.8 billion — has underscored the need for new sources of revenue to help people weather the crisis, Fincher said.

“We are on the precipice of a massive recession, and this state is set up poorly to respond to a recession because we rely so heavily on sales tax,” said Heather Weiner, another Democratic political consultant. “And so it is no longer an academic conversation. It is now a conversation about the real impacts of our upside-down tax code.”

Alex Hays, a Republican political consultant, frames the issue differently. “They are eliminating every single obstacle to tax increases,” Hays said of the unions and left-leaning groups opposing Mullet. “They know Mullet and Republicans would likely favor prioritization in the budget, rather than just putting it all on the backs of taxpayers.”

Mullet, who previously worked as a managing director at Bank of America, now owns three Ben and Jerry’s ice cream shops and a Zeek’s Pizza franchise on the Eastside.

He agreed the main reason he is being targeted this cycle is because of his stance on taxes and the budget, although he has often clashed with the statewide teachers union on other issues as well. He said the state must start finding ways to reduce its spending.

“For special interest groups whose sole focus is additional revenue, yeah, that’s going to drive them crazy to have someone who wants to talk about spending,” said Mullet, who was first elected in 2012.

“Because I disagree with them on that, it’s no surprise I have a primary challenger,” he said.

Mullet voted against the state’s two-year, $52.1 billion budget in 2019 because he thought it increased spending too rapidly and was unsustainable, he said.

That’s one of the votes that has caused the WEA to paint him as not supporting K-12 schools, which are the biggest single piece of the state budget.

Mullet also has supported legislation to retain the state’s system of public charter schools, which the teachers union opposes.

Andrew Shanafelt, an Issaquah teacher who is supporting Anderson, said WEA members want “someone who will stand up for public schools.”

With regard to the state budget, union members want to ensure “that whatever creative solutions the Legislature comes up with next year, it’s not coming from this same place of, ‘We’re just going to cut,' ” he said. On top of being a WEA member, Shanafelt is listed as an officer of Washington Cares, the other union-supported PAC that is spending heavily on the race.

In addition to pursuing a capital gains tax to raise money for state programs, Anderson says she opposes any public dollars going to charter schools, which are publicly funded but privately managed.

Anderson, a nurse who works at Overlake Hospital in Bellevue, also disagreed with Mullet’s vote against the state’s Long-Term Care Trust Act in 2019. That program will provide up to $36,500 per person to pay for nursing care or other services for people who can no longer care for themselves. The SEIU 775, which represents long-term care workers, was a major proponent of the legislation. The union’s president, Sterling Harders, sits on the board of the SEIU Washington State Council PAC, the biggest donor to Washington Cares. Harders didn’t respond to an email seeking comment.

Mullet said he objected to the program because it would impose a 0.58% payroll tax. “That was an over-a-billion-dollar tax that I didn’t think was necessary or the right use of money,” he said.

A capital gains tax, in turn, would take so long to implement that it wouldn’t solve the state’s short-term budget problems, he said.

Anderson said lawmakers should put a capital-gains tax in place anyway to help address budget problems in the long term.

“You can't just look at this one session, because this is something that's going to be going on for years,” she said. “So we need to make sure that we are standing strong on both feet ... so that we're not two years from now still trying to solve the same problems that we have today.”

A few other legislative races have also seen a flurry of spending in the lead-up to the primary, but not to the same degree.

More than $570,000 has been spent so far in the race between state Sen. Steve O’Ban, R-Tacoma, and Democrat T’wina Nobles, the president and CEO of the Tacoma Urban League, with about $215,000 of that money coming from outside groups.

That swing district seat in Pierce County’s 28th Legislative District is a top target for Democrats this year.