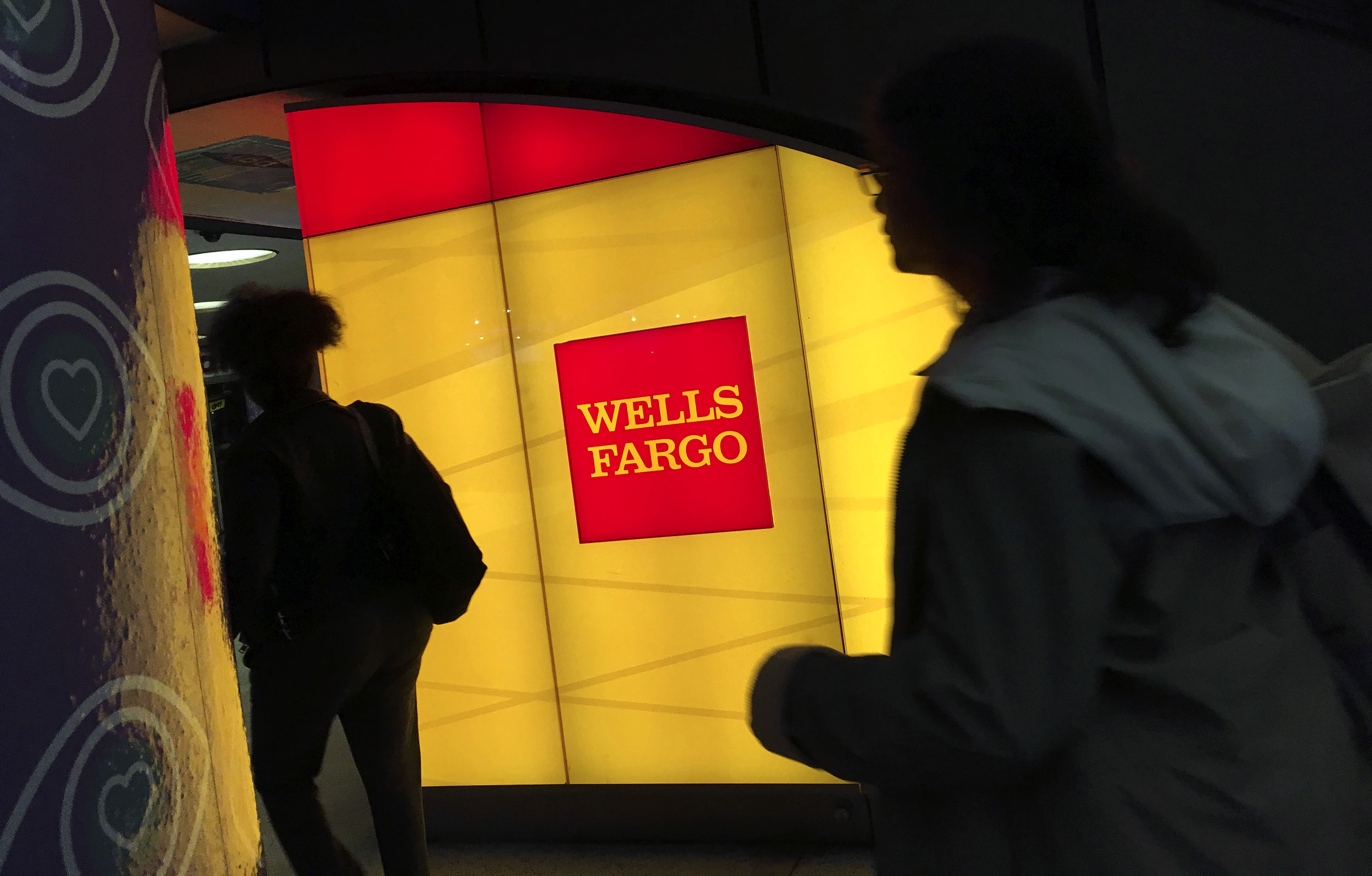 In this 2016 file photograph, commuters walk past a Wells Fargo ATM location at New York's Penn Station. (Photo by Swayne B. Hall/AP)

The final days of of the 105-day legislative session in Olympia were, by any standard, a mad rush to the finish. Washington lawmakers held late-evening and overnight votes late last week on a range of taxes needed to pay for their new two-year budget — in several cases, before their actual spending plan had even been released.

Throughout it all, Democratic leaders defended the fast-tracked public process, in part by saying earlier versions of most of their tax bills had previously been discussed in legislative committees.

Yet, for at least one major piece of the Democratic tax plan, that certainly was not the case. A new tax on big banks — a so-called “windfall profits tax” — wasn’t introduced or discussed publicly until after legislative leaders had already agreed to include it in their budget.

The text of the bank-tax bill didn’t appear anywhere until Friday morning, one day after lawmakers announced they had reached a budget deal, and two days before the end of the legislative session. House members passed the tax measure only hours after its text was made public and before the release of a fiscal note analyzing the bill’s effects. The House vote occurred around 4 a.m. Saturday, toward the tail end of an all-night floor session.

The Senate followed by approving the tax measure on Sunday, sending it to Gov. Jay Inslee’s desk a little more than 48 hours after its introduction.

House Bill 2167 is set to raise business and occupation tax on large financial institutions — those making at least $1 billion in net income per year — from 1.5 percent to 2.7 percent. The new tax is expected to raise about $133 million in revenue for the state over the next two years, making it a significant part of the $836-million revenue package lawmakers approved over the weekend.

The large banks also will see a tax increase as part of another measure, House Bill 2158. Together, the two bills will bring the banks’ total tax rate to 3 percent — twice what they currently pay.

The bank tax’s rushed timeline was reminiscent of a dustup last year, when legislators passed a highly controversial bill to exempt themselves from the state’s Public Records Act. That bill, too, was passed only about 48 hours after it was introduced, prompting a storm of citizen outrage and a veto by Inslee.

State Rep. Gael Tarleton, D-Seattle, said only 22 entities would be affected by the bank tax, none of them based in Washington state. “It’s the biggest banks in the world,” she said.

Those include JPMorgan Chase, Bank of America, KeyBank, Citibank and Wells Fargo, according to the Washington Bankers Association.

But to critics, the fast tracking of the bank tax had the effect of cutting the public out of the discussion, limiting opportunities to provide feedback on the legislation. Lawmakers attached the language to a blank, title-only bill that had been introduced without text earlier in the session, allowing them to sidestep constitutional rules that make last-minute bills more difficult to pass.

“I think it’s a clear violation of the intent and the spirit of the state constitution, which clearly says that bills introduced in the last 10 days of the session require a two-thirds vote [of the Legislature],” said Toby Nixon, president of the Washington Coalition for Open Government. “And it did not have a two-thirds vote.”

While the move wasn’t illegal, “To me, it’s a very disrespectful thing, at the very least,” Nixon said.

Tarleton, who chairs the House Finance Committee, said the last-minute bank-tax bill was needed after Senate leaders once again rejected the House’s proposal to enact a capital-gains tax. That tax, which House Democrats used as the basis of their budget proposal in March, would have affected “extraordinary profits” received from selling stocks and bonds.

“The reason it happened at the end game is that we didn’t know until the end game that we needed some revenue to close a hole in the budget,” Tarleton said Wednesday. “If that option play had not been run, we would still be in session.”

Support for a capital-gains tax in the Senate had always been iffy, however. In March, Senate leaders had declined to use the tax to balance their budget proposal, which they released four days after the House’s initial plan.

Democrats — who control the House and the Senate, as well as the governor’s office — say these types of last-minute maneuvers are frequently necessary to accommodate last-minute bills needed to complete a budget.

State Sen. Christine Rolfes, D-Bainbridge Island and the lead Senate budget writer, said the banks in question often pay corporate income taxes in other states that are higher than the combined 3 percent tax they are now being asked to pay in Washington.

“The question isn’t whether this tax is too high, the question was why our tax on them was so low,” Rolfes wrote in a text message Thursday.

Even some Senate Democrats, however, felt the big-bank tax needed a little more time for analysis and discussion.

“I don’t really have a problem raising taxes on big banks, but I thought the process was not good on that particular bill,” said Sen. Guy Palumbo, D-Maltby, one of three Senate Democrats who voted no on the legislation. Palumbo said he wanted more time to discuss concerns raised about whether the tax would violate the commerce clause of the U.S. Constitution, given that it affects banks that have business across state lines.

“It’s frustrating, because the Democrats spent the entire session proposing a huge variety of new taxes — and then, in the eleventh hour, they decide to rely on one they never mentioned in the first 103 days of session,” Stokesbary said. “There’s no opportunity to have meaningful dialogue, because they have already made the decision to lock it down to balance their budget.”

The Washington Bankers Association, which represents five banks that would be affected, said even its high-rolling members didn’t have time to thoroughly analyze the legislation before it was passed by both chambers of the Legislature.

Glen Simecek, the association’s president and CEO, said citizens should worry about the precedent lawmakers are setting with this year’s overnight votes and last-minute legislating.

“Every time something like this happens, particularly if there are new lawmakers, the perception grows that this is just the way business is done here,” Simecek said Thursday. “The real concern we have is the lack of transparency in this process.”

Tarleton said people still have time to weigh in on the bank tax, since the governor has yet to sign it into law.

Last year, about 20,000 people flooded Inslee’s office with calls and emails asking him to veto the Legislature’s public-records bill, which he subsequently did, she noted.

“They always have that recourse,” she said.