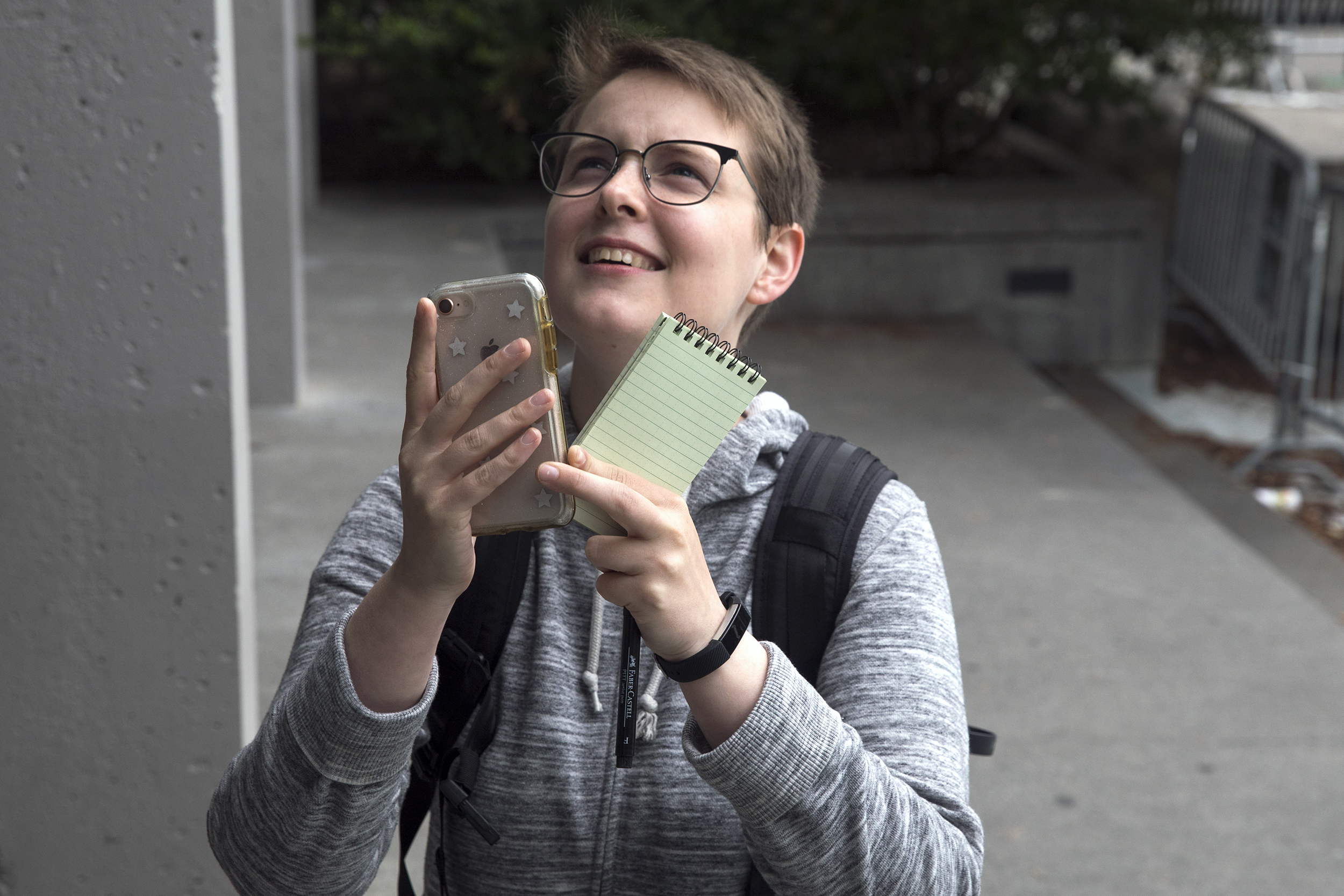 “Few people know how to take a walk,” proclaimed noted walker Ralph Waldo Emerson. If only he’d met the creator of Seattle Walk Report, who takes meandering to a transcendental level.

Rather than writing poetry about woodland strolls, the author and illustrator chronicles urban walks — and the curious discoveries she makes therein — by way of single-frame, black-and-white comics posted on Instagram under the handle @seattlewalkreport. To date, she’s amassed 165 posts and 12,300 followers, whose comments show an appreciation for her quirky perspective, which includes scientific tallying of mundane sights, such as flattened cardboard boxes, dogs with a certain “it factor” and people who look like Patty Murray.

Currently anonymous, the creator’s secret identity will be revealed on Aug. 13, at the Downtown public library launch of her new book of comics, Seattle Walk Report: An Illustrated Walking Tour Through 23 Seattle Neighborhoods. Until then, the Central District-based library employee is known only by her charming and unconventional take on Seattle.

On this foggy summer morning, the author is embarking on a walk around Seattle Center. The route isn’t planned, as she prefers to pick a general area and see where the walk takes her. Starting outside McCaw Hall, she immediately spots some large decorative planters. “This variety of pots makes me happy,” she says. “Maybe there will be a pot trend today.”

She looks fairly incognito, wearing a gray hoodie, black jeans, a black backpack and black sneakers. (While Emerson recommended just plain clothes and old shoes, the author says Superfeet insoles are crucial for comfort.) She carries a small reporter’s notebook, but does not jot down the pots. “With some things I make a mental note first,” she explains. “If it seems totally outstanding it goes in the notepad.” She also uses her phone to take pictures of things she knows she’ll want to draw later.

A self-taught illustrator, she says she didn’t think of Seattle Walk Report as a comic until someone else called it that. “I thought it was kind of a cute newspaper,” she says. And despite her knack for noticing the tiny details, she says her only journalism experience was working on her middle school newspaper — that, and creating, as a youngster, a household newsletter to update her family on domestic affairs, such as what’s for dinner.

“I’m really attached to Seattle Center,” she says, walking past the International Fountain. “I’m a big World’s Fair nerd.” At the mention of Crosscut’s Knute Berger, and his deep knowledge of the fair, she gasps and says, “He’s my George Clooney.”

When it comes to her Instagram notoriety, she’s a bit ambivalent. “At this point it’s kind of silly,” she says, noting that she hadn’t intended to make a big deal of being anonymous. She simply started that way with her first post in July 2017, and has continued ever since. “There’s this weird expectation that I’ll be Jenny Durkan or someone. But I’m just a random person.”

As the Monorail thunders overhead, she looks up. “I’ve never been on the Monorail,” she says. “Isn’t that a scandal?” At age 29, the lifelong Seattleite has also never had a driver’s license. In the book’s introduction she notes that, until recently, she had little interest in walking, and preferred the bus. But that all changed after an atypical walk during which the city’s workaday wonders started grabbing her attention, as if she’d put on 3D glasses. “I realized I didn’t need money, a car, or a week off from work to see new and fabulous things,” she writes. “There was an entire world hiding in plain sight in my hometown.” One of her first exciting finds: a carrot with a straw stuck through it.

“It’s really changed my life and perspective on so many things,” she says of walking. “It’s taught me about being open to all kinds of possibility.”

Pulling a reverse Henry David Thoreau, she is doubling down on urban existence. Instead of retreating to a cabin in the Walden woods, her version of his “sucking out the marrow of life” involves scanning the sidewalks of Seattle neighborhoods — such as Capitol Hill, where she recently delighted in discovering a pile of Christmas lights, a bag of rhinestones and a coupon for 20% off a noninvasive facelift.

“Walking and paying close attention to the little, overlooked details has definitely made me fall back in love with Seattle,” she says. “We mostly talk about the changes that happen on a larger scale: that building is gone, or this business shuttered. Before I walked, it felt like those types of things were all that ever happened in Seattle. But when you’re on your feet, going slow, with no barrier between you and the environment, your perspective changes.” She cites a repainted Little Free Library, a new stairway in Mount Baker Park, three darts and a potato sack on Broadway and Pine. “There’s value in acknowledging the smaller things I see on a day-to-day basis that tell a story worth talking about and even celebrating.”

Back at Seattle Center, she stares up at a white sign high on the wall of Memorial Stadium. “This old-school ‘danger’ sign appeals to me. I really like the typography,” she says. “It’s so straightforward, not as threatening as modern signs. Old signs are little pieces of history.” But the call of the sign subsides as she spots something on the ground. “Wow, a zip tie! Oh — two more!” The zip ties get noted in the notebook. A tally has begun.

Part of what keeps Seattle Walk Report installments compelling (in addition to the local trivia and history she blends in with the observations) is her sense of humor, sometimes employed to convey “mysteries” of the city. In one illustration, she wonders why a Dunkin' Donuts coffee cup is on the ground when the closest location is 800 miles away. In another, she asks, “What Did Doug Do?” after encountering a sign on a telephone pole reading, “Doug, stay off our property.”

Near the KeyArena construction site, she notes a plastic drinking straw taped high on a column. “See, there are stories all over this place. What was that person thinking? They had the blue tape. They thought the straw needed to go up higher. …What does it mean?”

She walks along a grove of trees in the KEXP courtyard, all of which have been marked as “Protected.” Many of the signs have a value attached: $390, $1,070, $1,200. “I love it when people decide how much a tree is worth,” she says. “Who are these tree appraisers?”

Asked if her ambulatory explorations extend to walks in the woods, she says, “I like nature … to a point. But out in the woods there’s usually a trail, so your walk is predetermined. One of the things that appeals to me about walking in the city is that there’s more freedom — you can make your own path.”