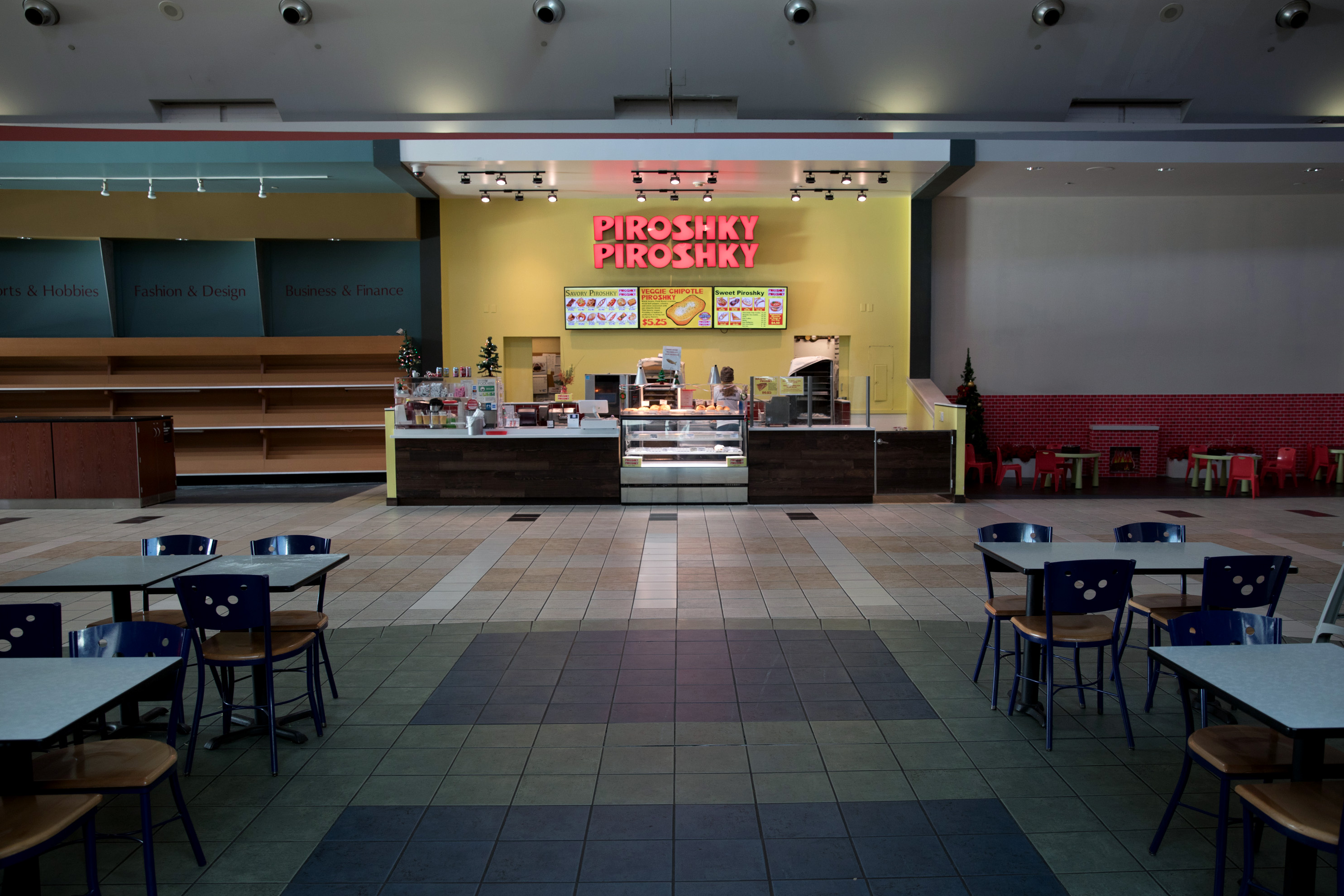 The Piroshky, Piroshky stand inside the deserted Northgate Mall in Seattle, Nov. 24, 2019.

I am 40 feet south of Sarku Japan, and 30 feet east of a Subway. Twenty yards in the other direction is Philadelphia, in the form of Charley’s Philly Steaks. Just a bit north is China, if anything about Panda Express could be described as Chinese. There’s a Taco Bell, too, but even an imaginative writer could hardly say Taco Bell is Mexican. And like Sarah Palin, when I look directly ahead, I can see Russia, in the form of the very bright, and very empty, Piroshky, Piroshky.

What I can’t see anywhere are people.

If you’ve lived in Seattle for any period of time, you’ll know I am in the Northgate Mall food court. What you may not know is that Northgate — the nation’s very first mall — is now one of the country’s latest ghost malls. In a trend that reflects shifting retail patterns across the globe, the mall is being “redeveloped,” as brick-and-mortar stores close and online sales surge.

As of Monday, the landlord had turned off the heat in the food court, where Piroshky, Piroshky employees appear to be warming themselves by standing close to the baked meat pies.

Northgate opened in 1950, on a 60-acre plot, and the ribbon-cutting was such a big deal to Seattle that television stations interrupted regular programming to show it. Then newspapers described Northgate as a “miracle mile,” with the $3 million state-of-the-art Bon Marche department store as centerpiece. Back then Northgate wasn’t even covered — it was more like University Village.

Today, America’s first mall is mostly deserted, with all but a few dozen stores closed. I write this in the food court, a place I discovered a few years ago as an ideal setting to work. I’m at my favorite table, which is just far enough away from the automatic doors to avoid a breeze, but not too close to Sarku Japan, which would make me smell like teriyaki. But these days there isn’t a lot of meat on the grill at Sarku, and those automatic doors hardly ever slide open, either. 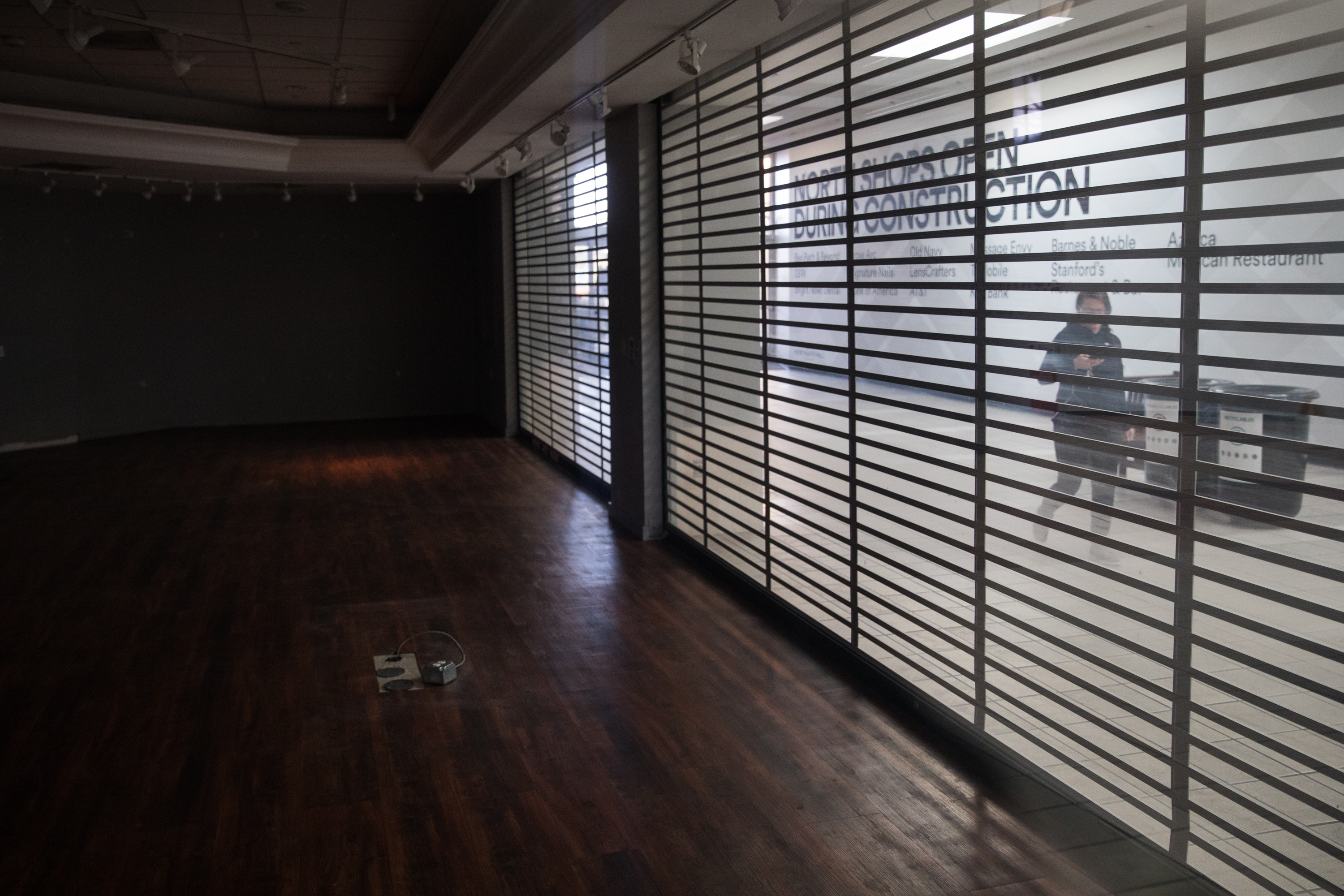 Northgate remains officially open, but almost every place you’ve ever shopped at is closed. JC Penney closed in May. I bought my last pair of underwear at the Bon this summer. (As a true Seattleite, I refuse to call any of the Bon’s Seattle locations by their current name, Macy’s.) Northgate Nordstrom had its last anniversary sale and closed in August. On the day the Northgate Gap closed, I tried to find some final markdowns, but all they had left for sale was the store’s halogen light bulbs. For $2, I bought all the light bulbs I will likely need for the rest of my life.

The Starbucks in the food court closed a few weeks ago, and the employees gave me free coffee on their final day. Watching a Starbucks close down is not something you see much. Though Northgate Mall is officially in the city of Seattle, the entire milieu is vaguely reminiscent of an Eastern bloc settlement contaminated with nuclear waste. It feels like everyone who had the sense or the means to flee has already abandoned it.

If you think that metaphor goes too far, consider that Olga Sagan, owner of Piroshky, Piroshky, told the Puget Sound Business Journal that the conditions were now “like a third-world country.”

But I’m still here, wearing a down jacket. For the past few years, I have been a semiregular in the food court. I discovered it as a spot to write when my friend Margot and I were looking for locations to work together. Northgate was exactly midway between our two homes, and there was plenty of parking.

We first tried to write in the Chipotle, but it was too crowded for us to take up space for the entire day. The nearby food court had plenty of room, though, and unlike some of the coffee shops I also write at, you could hijack a table all day. There were bathrooms, available power outlets and Wi-Fi. Margot has a real job, so usually I’m at Northgate by myself. And lately, that has actually meant that I am by myself.

What most drew me to Northgate was something missing now (along with heat): the ideal amount of white noise from the crowds. When the mall was occupied, there was exactly the right level of people noise in the food court, which helped me lose myself in my work. I’ve got a perfectly good office in my house, but sometimes the commitment of leaving my home and going somewhere forces me to be creative. The only thing that works for that is somewhere with background noise to help me focus on the page in front of me.

In Seattle, filled with artisanal fair trade coffee shops that are always too crowded to snag a table or a plug, Northgate always had room. But some of the appeal is just how strange the idea is of going to the Northgate food court to write. Like my Carhartt canvas jacket, Northgate is “against type,” so unhip that in a twisted way it might be cool.

I really wanted Terri Gross to one day ask, “Where did you write your last book,” and to tell her I’d done it in the middle of the Northgate food court, next to Sarku Japan. Considering how behind I am on my current project, though, and given Northgate’s state of decline, this is not likely to happen. 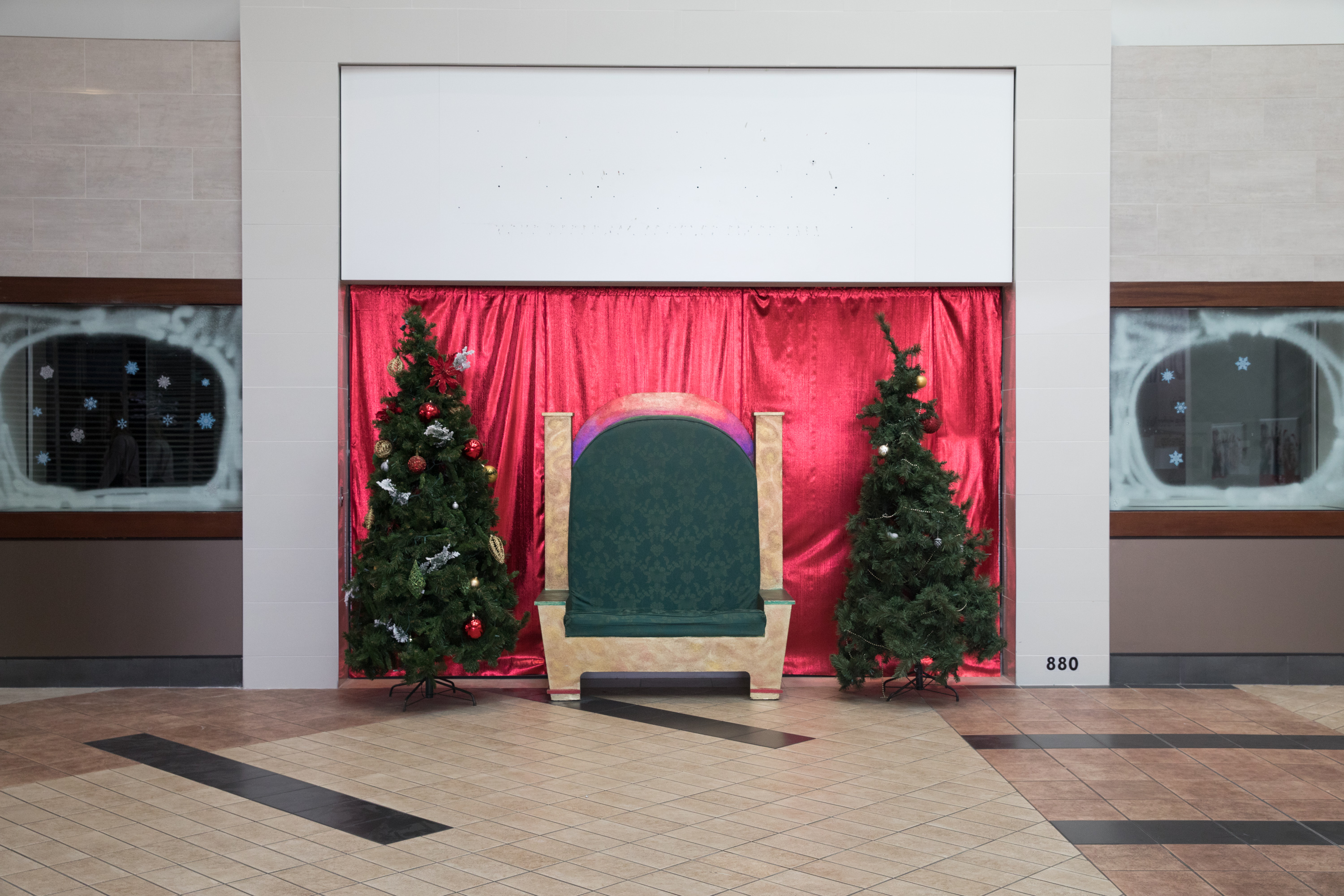 The chatter of people no longer buzzes in the background, and the food court consists of just the handful of stores I described above. Sarku Japan alone once had a half-dozen employees chopping up vegetables for their grill. Now when you give your order to the cashier, the cashier cooks your teriyaki. Piroshky, Piroshky still has five employees, the owner said, but with the heat off, they don’t want to come to work.

What exactly is happening at Northgate? The middle of the mall is being demolished by bulldozers and remade into a practice arena for the upcoming National Hockey League team. It will be the “NHL Seattle Ice Centre,” with three rinks. This seems remarkably sad to me, but also, it reflects the fact that in an online world, practicing hockey may be the only thing left that requires a brick-and-mortar presence.

The stores at the north end of the mall, including Barnes and Noble, and the stores at the south end, including the Nordstrom Rack, remain open at present, in part because their entrances open to the outdoors. But even a spokesperson for Simon Property Group, the real estate company that owns the mall, wasn’t exactly sure how to describe the future.

A light rail station is being constructed in the west parking lot, and there are plans for apartments and “mixed use” retail in what once was a vast asphalt parking lot where I taught my teenage son how to drive. There is too much valuable real estate in Northgate for it to remain empty for long, so expect condos, apartments and, eventually, another Starbucks of some sort.

In an application to the city for the redevelopment, Simon, which owns malls all over the nation, called it a “complete reimagining of Northgate.” You need only sit next to me now at the food court — you’d be next to me and just two other people in a sea of tables and chairs — to know the once grand mall has already been reimagined.

In this boundless emptiness, I feel complicit. I prefer to buy things from actual people and actual stores, but like everybody else I do plenty of online shopping.

Recently I wanted pink wool socks, but none of the local retailers I visited could help. Late at night, like someone texting while drunk, I hit many buttons on my Amazon account. The next morning, my email inbox showed I had purchased $198 of pink wool socks. The UPS driver dropped off packages for weeks. In the end, I returned $192 of them, settling on a single pair. I know the carbon footprint of this is shameful, and that my fashion vanity is exactly the kind of fetish that plays into the reason Northgate Mall is collapsing.

These trends are evident all over Seattle, and all over the world, but perhaps no single location tells the story as succinctly as the downtown Bon (renamed in 2005, but as I already told you I’m having none of that). That store opened as the Bon Marche in 1890, six years before the Klondike Gold Rush’s demand for provisions made Seattle into a real city. But in 2015, the department store sold off the upper floors, and jammed their remaining underwear into the basement, main floor and mezzanine.

Even that couldn’t last. The downtown Bon closes for good in February. The tenant that will occupy the entire building: Amazon.

I’ll miss the downtown Bon, but it was never a place that had space for me to work on my laptop. For now, I continue typing away in the Northgate food court, hoping that more people wander in, so there is enough white noise that I can concentrate. The only place to get coffee is Subway. This current situation may be too weird, even for me.

The view from my favorite table faces Piroshky, Piroshky. Everything around the Russian pastry shop has closed, but the illuminated food counter abides, the can lights above likely containing the same wattage light bulbs I purchased when the Gap closed. To the left are rows of empty shelves in a shuttered newsstand. To the right is a bizarre cardboard Christmas mantel and a lonely fake miniature Christmas tree.

The symmetry, duality and garish color scheme reminds me of a Wes Anderson movie. There is plenty of room in Northgate for wide-angle cinematic shots with no people in the frame. All you need is Owen Wilson to show up, put on an apron and get behind the counter. It’s beautiful in a way. The many meat pies behind the glass at Piroshky, Piroshky suggest an optimist’s view of the future, perhaps a Northgate full of meat-pie-loving hockey players. But the business will close in March, when the lease expires. 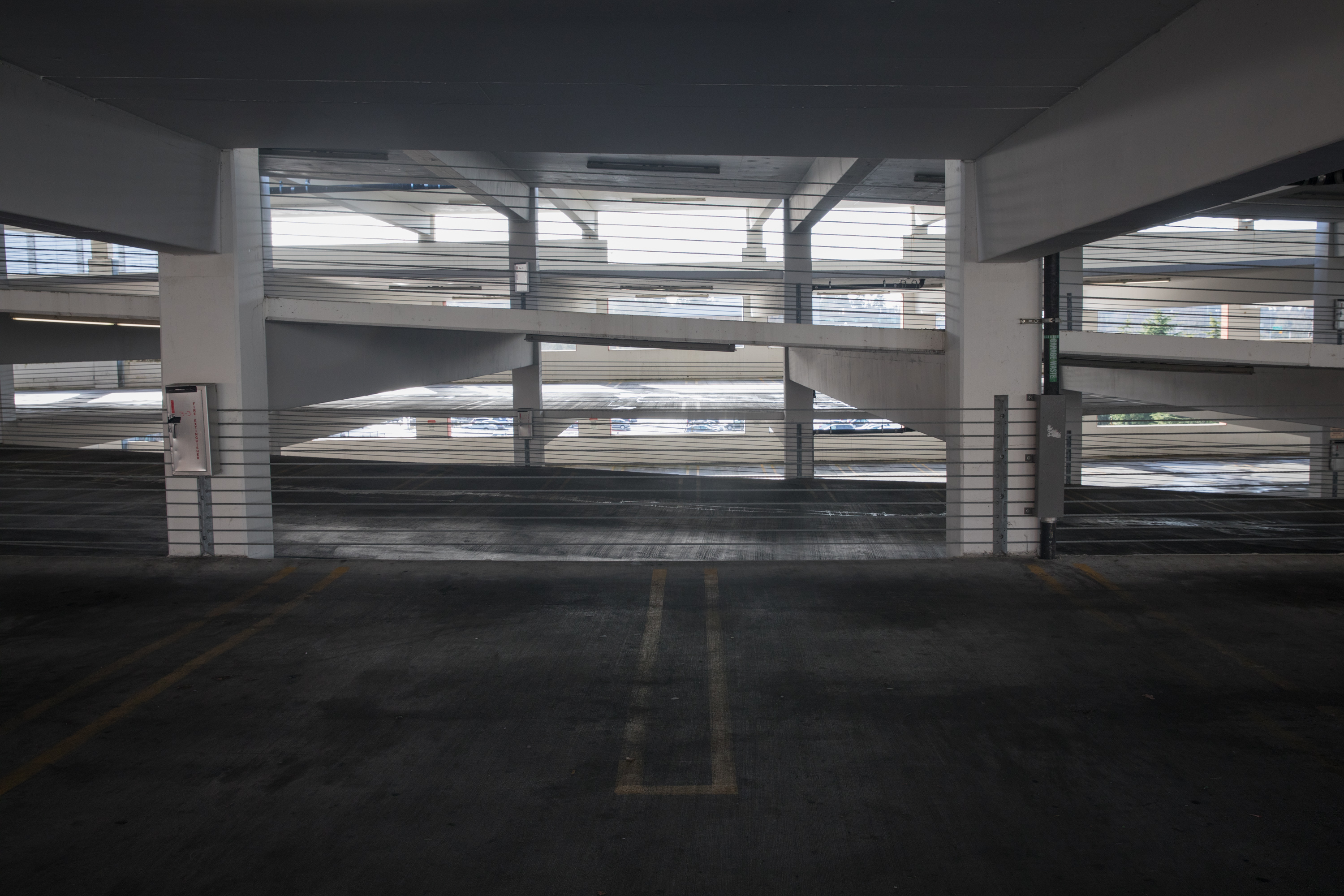