Months before most of Seattle’s other theater companies reopen, ArtsWest is staging the aptly titled musical ‘We’ve Battled Monsters Before.’ 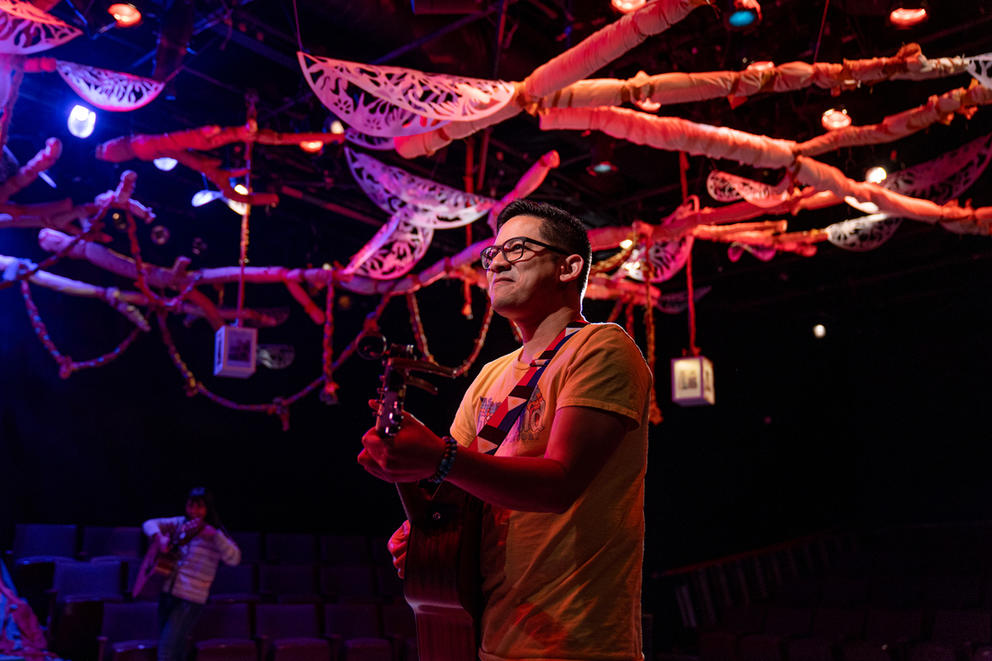 Seattle composer/performer Justin Huertas, who plays Diego, during a rehearsal of “We’ve Battled Monsters Before,” a musical written by Huertas and directed by Mathew Wright, at ArtsWest in West Seattle Nov. 23, 2021. (Jovelle Tamayo for Crosscut)

On a recent rainy afternoon, Justin Huertas was hunkered down in a West Seattle basement, singing pop-folksy tunes about the search for a magical bird with healing powers and the risky business of battling demons. With his fresh-faced looks and buoyant energy, Huertas could easily pass for a high school senior — one who just happens to play guitar, piano, cello and ukulele, and perform self-penned songs with panache.

But Huertas is a Pacific Lutheran University grad, now in his mid-30s, and the basement is a rehearsal room at ArtsWest Playhouse and Gallery. He has been spending a lot of time there this fall, creating a contemporary, family-friendly musical inspired by the Filipino epic poem “Ibong Adarna,” which has intrigued him since childhood. We’ve Battled Monsters Before will debut this month at ArtsWest, which is counting on the play to bring a sizable audience back inside a theater facing its own challenges as it reopens.

In prepandemic days, ArtsWest produced well-received annual seasons of musicals and plays, and drew about half its audience from the roughly 80,000 people who reside in West Seattle. But that was before COVID-19 essentially closed all performing arts facilities in the city. It was also before the West Seattle Bridge closed to most traffic in March 2020 after the discovery of cracked support girders that made the main transportation artery into the district unsound.

The latest estimate for when the bridge will fully reopen after extensive repairs is summer of 2022. But ArtsWest Artistic Director Mat Wright and Managing Director Laura Lee aren’t waiting around. They have planned an ambitious season with a neo-fantasy motif that kicks off with the world premiere of We’ve Battled Monsters Before (Nov. 26-Dec. 26). 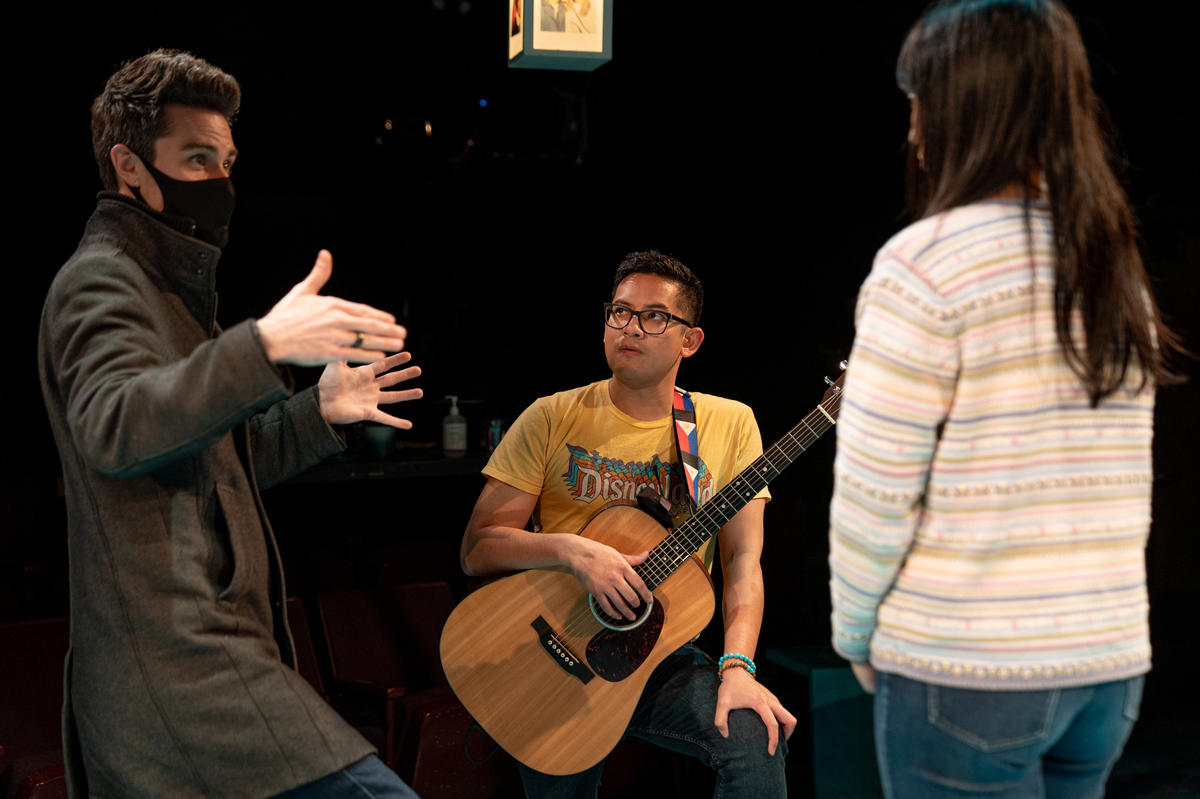 Justin Huertas (center) and co-star Rheanna Atendido (right) listen to feedback from director Mathew Wright during a rehearsal of “We’ve Battled Monsters Before,” a musical written by Huertas, Nov. 23, 2021, at ArtsWest in West Seattle. (Jovelle Tamayo for Crosscut)

Justin Huertas (center) and co-star Rheanna Atendido (right) listen to feedback from director Mathew Wright during a rehearsal of “We’ve Battled Monsters Before,” a musical written by Huertas, Nov. 23, 2021, at ArtsWest in West Seattle. (Jovelle Tamayo for Crosscut)

It’s an apt title for the theater’s current situation: Launching a comeback season months before most of Seattle’s other theater companies reopen, at a time when COVID-19 has yet to be vanquished and when patrons from much of Seattle would require a long bus ride or a lengthy car detour to get to West Seattle. (The low bridge is open to night owls and early birds, weekdays 9 p.m. to 5 a.m. and weekends 9 p.m. to 8 a.m.)

But it isn’t an impulsive move, according to Wright. “It really was part of a 20-month continuum with us working together to try and figure things out,” he said during a prerehearsal chat. “We went through plan after plan after plan, depending on what the changing science around COVID and government recommendations were, what the bridge situation was. And we decided opening at the end of November was possible.”

“We’re somewhat smaller than a lot of local theaters, so we’re more nimble and can adapt easier,” added Lee. “And we figured that if people are willing to go see a Kraken game in the new arena, they’d be comfortable coming here.”

ArtsWest staff and board of directors have also been busy raising funds to retire the $400,000 mortgage on the nonprofit venue’s building. The former five-and-dime store, built in 1929 and transformed into an attractive arts space in 1999, sits in the heart of West Seattle’s Alaska Junction — just up the street from longtime local hangout the Husky Deli. Paying off that debt was part of a $1 million-plus capital campaign, which also will cover new improvements to the gallery and theater spaces, additional COVID-19 safety measures and an ongoing plan to execute the organization’s mission as a more inclusive, proudly “anti-racist” institution.

But the most immediate goal is filling the 149 seats in the comfy, flexible theater auditorium for the four-week run of We’ve Battled Monsters Before. 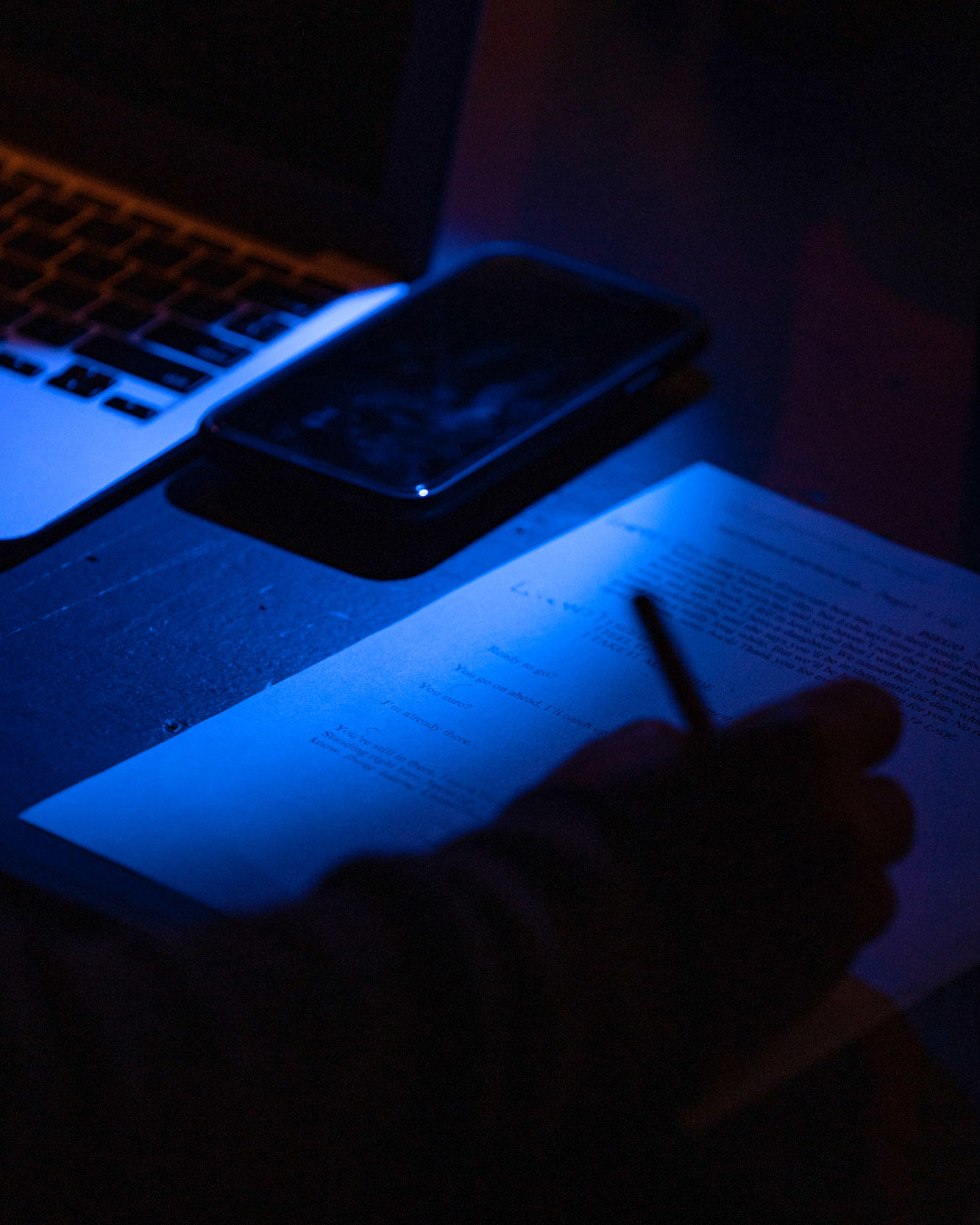 Jasmine Lomax, the stage manager for “We’ve Battled Monsters Before,” makes notes during rehearsal on Nov. 23, 2021, at ArtsWest in West Seattle. (Jovelle Tamayo for Crosscut)

Jasmine Lomax, the stage manager for “We’ve Battled Monsters Before,” makes notes during rehearsal on Nov. 23, 2021, at ArtsWest in West Seattle. (Jovelle Tamayo for Crosscut)

A fan of mythologist Joseph Campbell’s writings and of Marvel Comics superhero movies, Huertas favors the sort of adventuresome fables that lead to everyday heroism and self-acceptance. “All the stories I write are personal in some way, and this is one of the most personal,” he explained, “because it’s based on these cool bedtime stories my father told me and my brother, and on my own relationships with my entire family.”

Huertas not only wrote and composed this whimsically mythic musical about a demon-fighting Seattle family, but co-stars in the two-person show alongside captivating local singer-songwriter Rheanna Atendido, also of Filipino heritage.

Disarmingly good-natured and forthcoming offstage, the Northwest-born Huertas is a creative dynamo whose original mini-musicals are now drawing national attention. His first show, Lizard Boy, was a combination cartoony horror story, gay rom-com and musical spree that successfully debuted at Seattle Repertory Theatre in 2015 and was recently restaged in a revised version (also co-starring Huertas) at Palo Alto, California’s TheatreWorks. More productions of the show are likely on the horizon.

He has also performed in numerous plays written by others, while simultaneously concocting additional projects of his own, including the 2019 fantastical musical The Last World Octopus Wrestling Champion, a “coming-of-age story with comic-book-like elements, Seattle culture and lore, and queer identity.”

Wright commissioned and directed Octopus, which proved a hit at ArtsWest and gratified his theater’s investment in Huertas’ creative output. 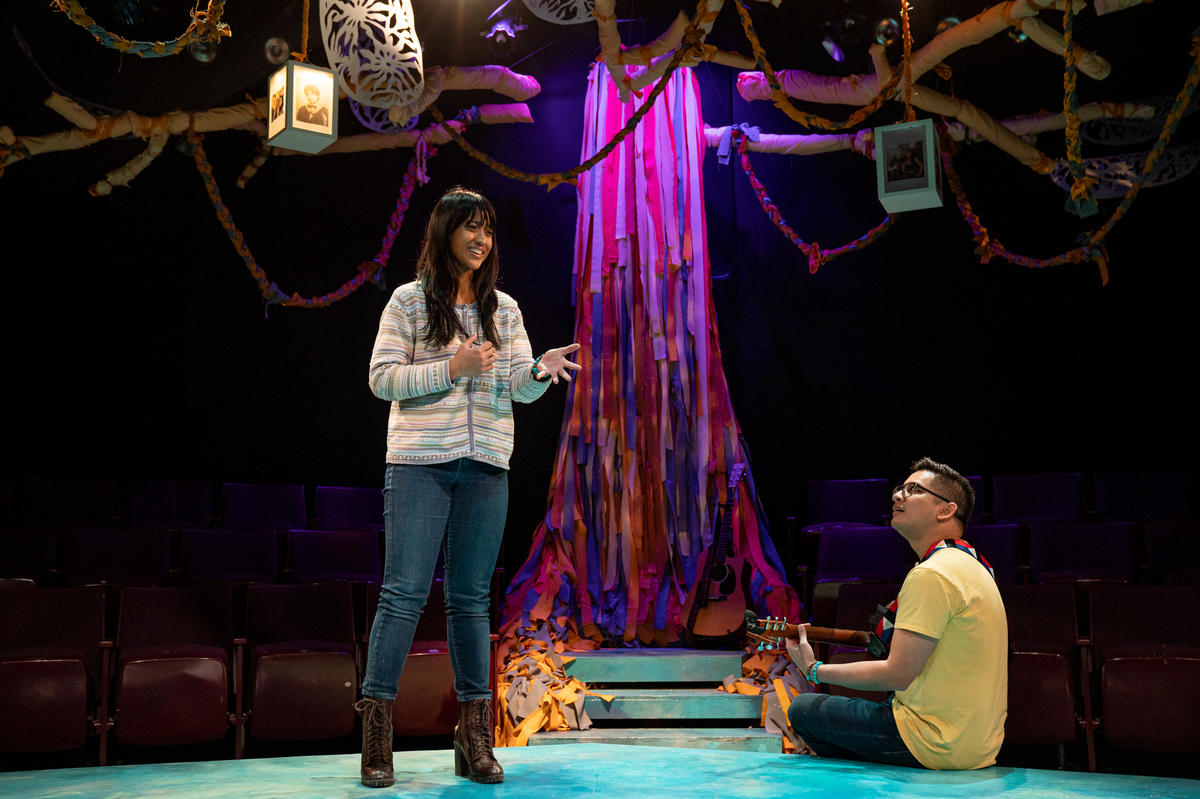 Rheanna Atendido as Adarna, left, and Justin Huertas as Diego, right, during a rehearsal of “We’ve Battled Monsters Before.” (Jovelle Tamayo for Crosscut)

Rheanna Atendido as Adarna, left, and Justin Huertas as Diego, right, during a rehearsal of “We’ve Battled Monsters Before.” (Jovelle Tamayo for Crosscut)

“I thought Lizard Boy was one of the most interesting and forward-thinking things I’d seen in Seattle theater,” recalled Wright. “When I began talking with Justin about doing something at ArtsWest, and he told me about his interest in sci-fi and fantasy, initially I said no, I was not interested in that style at all.… But we discovered we’re both interested in mythology. Then he turned me on to Stephen King novels, and now I’m a big fan. We had a kind of mind meld.”

Huertas, in turn, appreciates Wright’s approach to making his shows cogent and approachable for as wide an audience as possible. “Something I love about how Mat interacts with my work is that he’s very trusting of the writing, and how we embody the story onstage,” he said. “And that has encouraged me to write in a style where the story could very easily just be like we’re around a campfire, saying what happened, and it still translates to the audience.”

Wright has also made a greater commitment to cultural, gender and racial diversity in ArtsWest’s programming, despite the theater’s predominantly white audience. For the 2020-21 season, ArtsWest worked with a new “power sharing” cohort of diverse local artists to assemble a line-up of works devised almost entirely (five of the six productions) by artists of color. 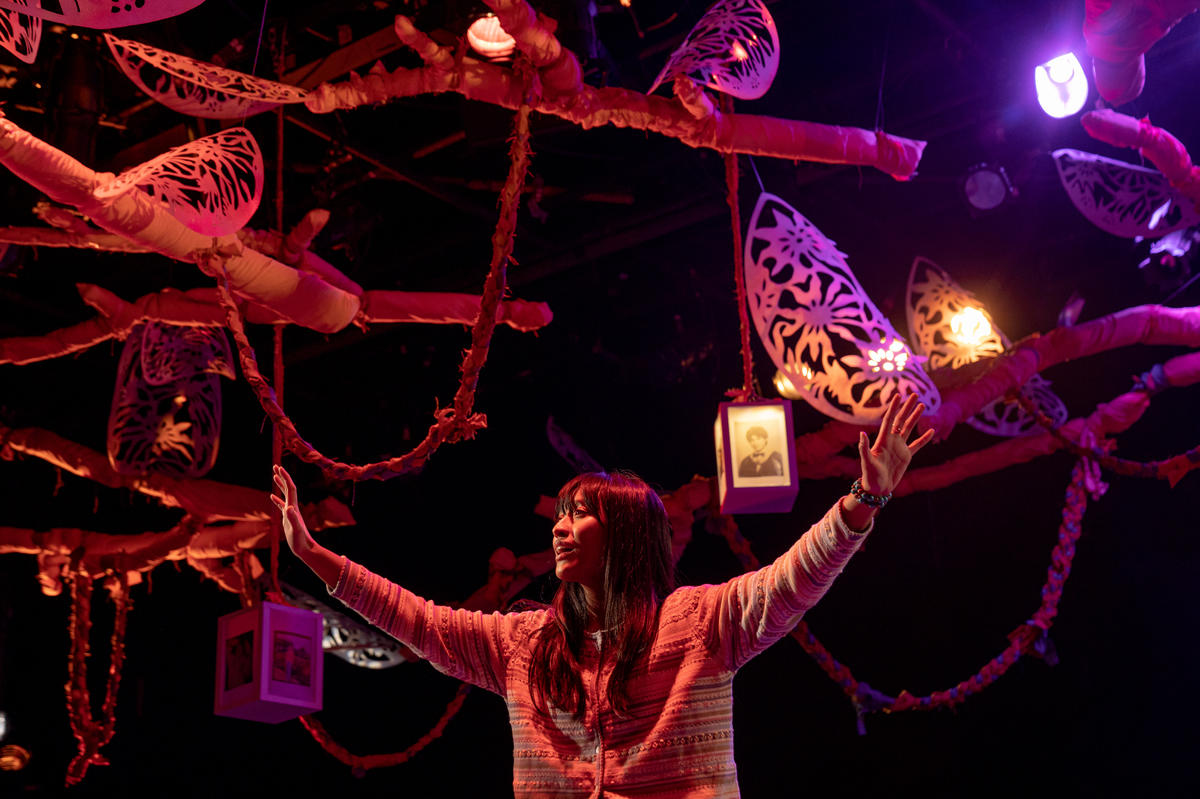 Seattle singer-songwriter Rheanna Atendido as Adarna, during a rehearsal of “We’ve Battled Monsters Before” at ArtsWest. (Jovelle Tamayo for Crosscut)

Seattle singer-songwriter Rheanna Atendido as Adarna, during a rehearsal of “We’ve Battled Monsters Before” at ArtsWest. (Jovelle Tamayo for Crosscut)

ArtsWest board President Walter Reese sounds genuinely bullish on the organization’s prospects as it moves into the next phase: “During the last 18, 20 months we’ve had a lot of support from the community,” he said. “We had an in-person [fundraising] gala in October that was very well attended by over 100 people, and we’re on our way to completing our $1.2 million capital campaign goal.”

The West Seattle Bridge closures will be a challenge, he admitted, “but some of the people who attend ArtsWest come from other nearby areas,” — i.e., south of Seattle, “that won’t require a trip over the bridge.” (And as Huertas has learned, municipal buses are permitted to use the lower level of the West Seattle Bridge — his commute from Capitol Hill, once he gets downtown, takes roughly 30 minutes on the RapidRide C line.)

Fellow ArtsWest board member Lindsay Wolpa, a strategic project manager at the Northwest Seaport Alliance, works closely with the Port of Seattle on transportation and other issues. She expressed confidence that though repairs on the bridge won’t be finished until June or July of next year, the ArtsWest fare will be enticing enough to bring people in from around the area.

“The West Seattle community is really tight and supportive…. The junction is a great place to grab a bite or a drink and see some great theater,” Wolpa said. “What Mat has brought to our stages is amazing, and I think people really want to get back to seeing things. They want to feel things.”

The ArtsWest team is poised to offer that experience — even if they have to battle a few contemporary monsters to do it.