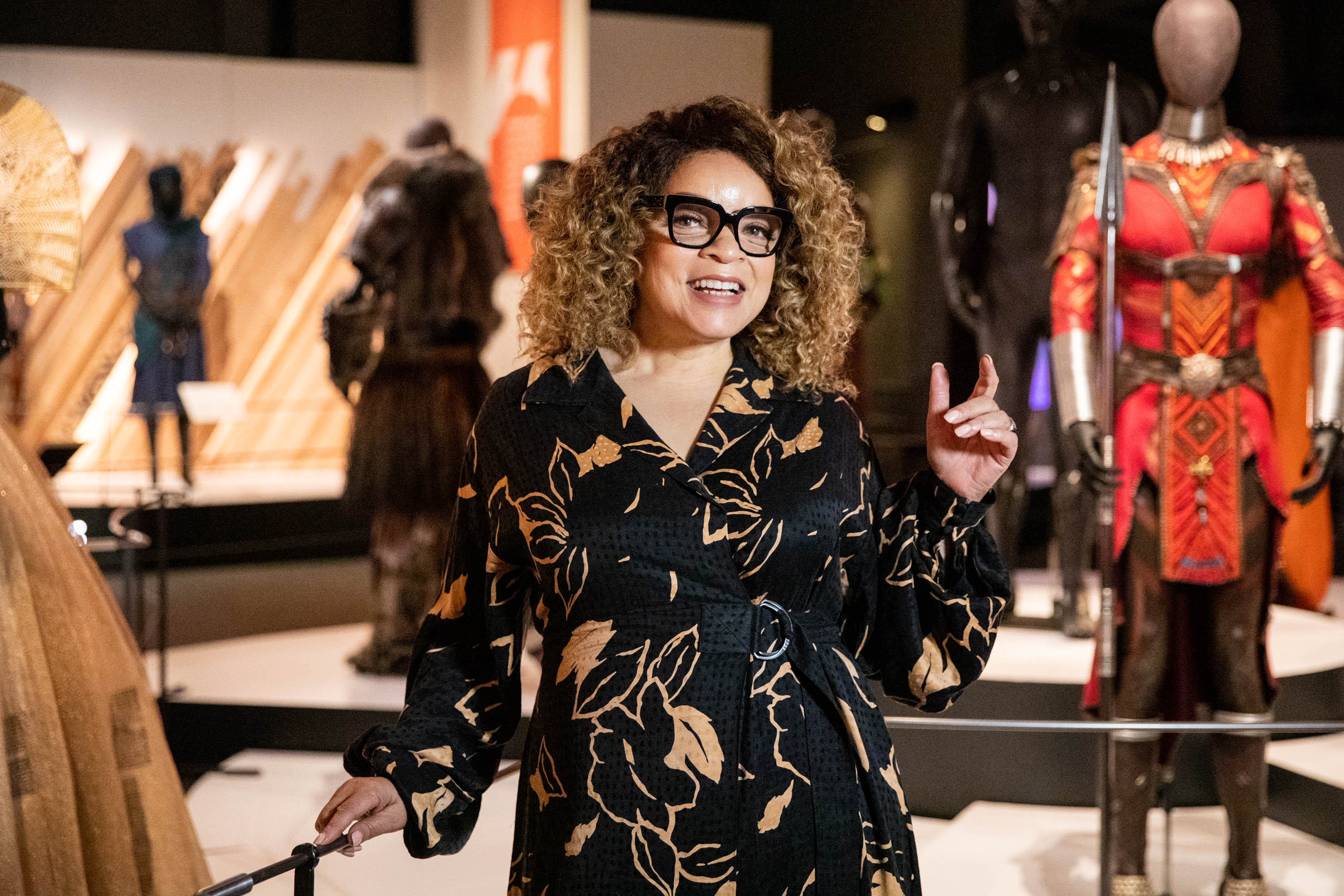 Oscar winning designer Ruth E. Carter in front of one of her ‘Black Panther’ costumes. A new exhibit at MoPOP explores her perspective on Afrofuturism across more than 12 films. Thursday, June 16, 2022. (Amanda Snyder/ Crosscut)

At the Museum of Museums in Seattle hangs a mask that seems to have dropped in from an imagined future, or maybe the distant past. Somewhere in between a motorcycle helmet, interstellar aviator cap and an African Dan mask, the cyberpunk assemblage is punctuated by wooden beads, bushels of twigs, nails and shark’s teeth. Yellow and orange flowers add a sense of softness. And an embedded black wristwatch looks like it could turn our collective clock back or forward like a time machine.

Created by New York-based Afrofuturist artist Mark Wilson Jr., the untitled headdress also includes a camcorder, its lens a watchful third eye looking into the past — and the future. The artwork is one of several blending Afrocentricity, mythology, sci-fi and technology in Hollaback to the Future: Afrofuturist Dimensions (through Aug. 31), an expansive new group exhibit curated by Seattle artist Moses Sun.

The grouping of paintings, collages, installations and digital art by artists from Seattle to Ghana asks: How can we reach across time and space and imagine a new future? What does a pan-African cosmic consciousness look like? Where do technology and liberation intersect?

Or as Sun put it during a recent tour of the show: “What does it mean to be an Afrofuturist?”

Starting the Juneteenth weekend, visitors will find more answers to these questions at Seattle’s Museum of Pop Culture, or MoPOP, where the traveling national exhibit Ruth E. Carter: Afrofuturism in Costume Design (June 18 to January 2023) is making its first West Coast stop. Showcasing more than 60 costumes by the celebrated designer — who won an Oscar for her Afrofuturistic costumes in the blockbuster Marvel movie Black Panther — the show celebrates Carter’s unique talent for marrying African-inspired designs with technology like 3D printing.

Whether you are a seasoned Afro-space traveler or new to “astro-Blackness,” the artworks exhibited at MoPOP and MoM offer an intriguing and interstellar voyage into Afrofuturism and beyond. 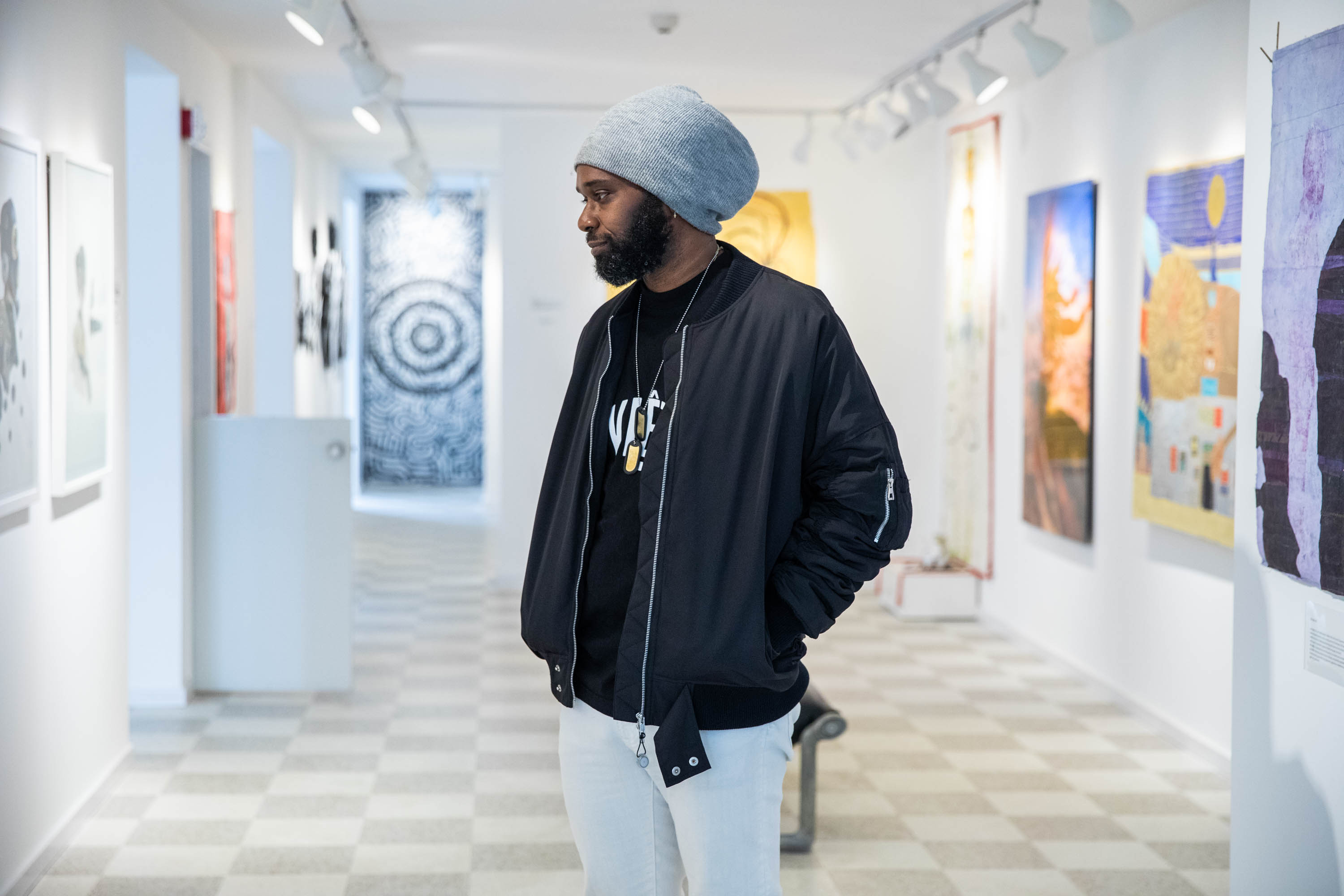 Before embarking on this journey, a quick primer on Afrofuturism courtesy of Ytasha L. Womack and other scholars. While some understand it as Afrocentric sci-fi (thanks to popular movies like Black Panther and tv shows like Lovecraft Country), the concept is more expansive than that — more a philosophy than an easy-to-pin-down genre, which often also includes elements of fantasy, speculative fiction, magical realism, mysticism, history, technology and social or cultural critique.

Art curator and Afrofuturist Ingrid LaFleur defines it as such: “a way of imagining possible futures through a Black cultural lens.”

For Moses Sun, there’s no one definition of Afrofuturism. (Hence the “dimensions” in the show’s title). “It’s different for everyone,” he says. The exhibit at MoM puts this into practice, revealing that Afrofuturism can show up in varied ways — from immersive installations (the lunar-themed “Time Flow Healer’s Room” by local artist Zahyr Lauren), to dreamy digital collages by Afroscope aka Nana Opoku (who is representing Ghana at the 2022 Venice Biennale), to Seattle artist Ari Glass’ gold-leafed murals and paintings, which brim with mysticism.

“What all these people are sharing [is] their vision — so they’re more Afro-envisioneers to me,” Sun says. “Afrofuturism,” he continues, “really represents the unseen dreams of artists, people who have an alternative vision of the world … and what they may wish for in the future.” 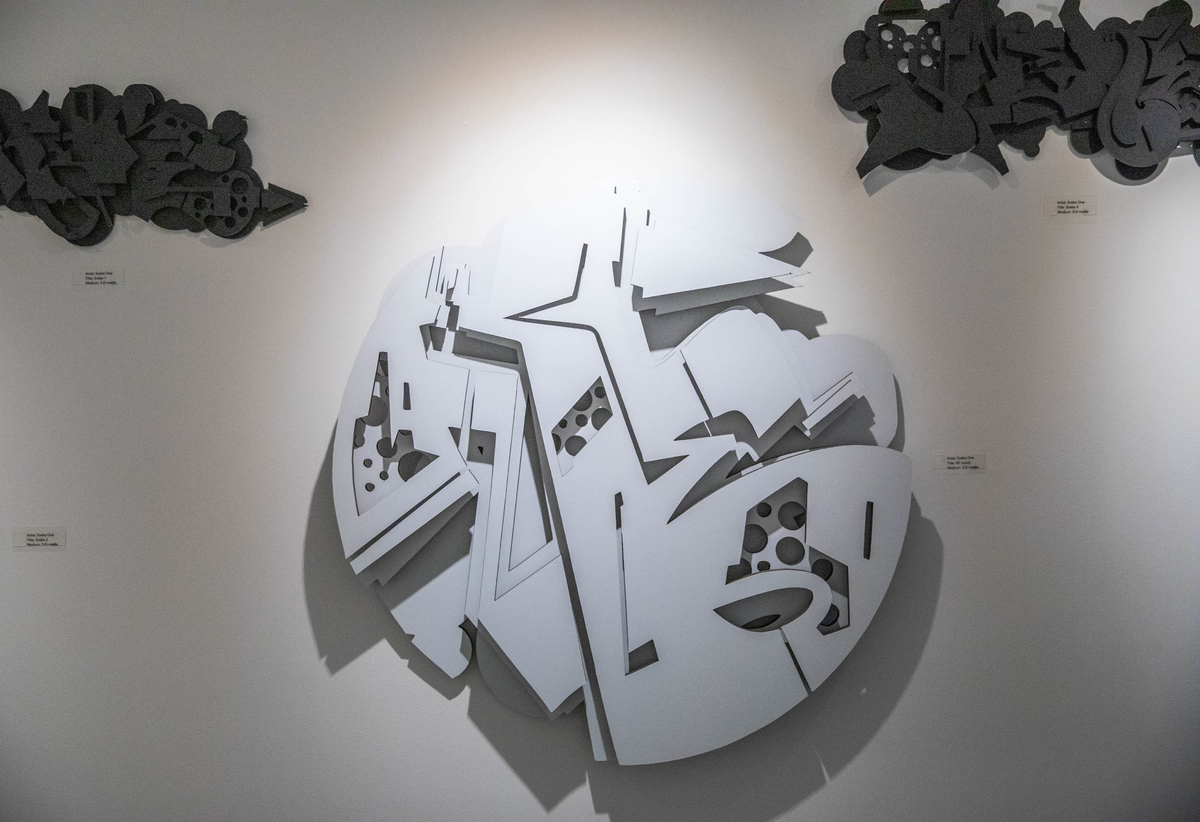 Three wall installations by Sneke One, a longtime Seattle graffiti artist. His work is featured in the exhibit “Holla Back to the Future” at the Museum of Museums in Capitol Hill. (Amanda Snyder/ Crosscut)

Three wall installations by Sneke One, a longtime Seattle graffiti artist. His work is featured in the exhibit “Holla Back to the Future” at the Museum of Museums in Capitol Hill. (Amanda Snyder/ Crosscut)

As we talk through the galleries, chipper chirps of birdsong resound around us. The sounds are coming from the speakers on a large TV screen, where a 3D-animated, lush green tree sprouts from a golden sphere. As the camera zooms out, it becomes clear the sphere is a planet, held in a Black hand, featuring sharp, Kermit-green manicured nails topped with windmills. The short animation, by the Nigerian-American multidisciplinary artist Abieyuwa, is a tiny window into what a futuristic green utopia may look like, and it’s hard not to want to disappear into it.

Sun walks over to an alcove, which Oklahoma artist Jaiye Farrell has transformed with paint. Up close, it looks like an abstract amalgam of white squiggly lines — a dance of ancient petroglyphs — but, through a trick of the eye, when you move further away, the concentric rings of the design become three-dimensional and lure you back in. Could this be a portal to a new dimension?

Nearby, three white hieroglyphic wall installations by Sneke One, a longtime Seattle graffiti artist, echo Farrell’s ancient-but-futuristic alphabet. The “graffitechture” pieces, Sun points out, are made from materials architects use to mock up building designs, which Sneke One cut up and layered into a new, 3D graphic language.

“It’s both Afrofuturist and it’s very hip-hop,” Sun says. “This is what Black people do all around the world: We will take technology and flip it.”

It’s these sorts of visual echoes and connections that Sun was hoping to create by bringing Afrofuturist artists together. “Hollaback to the Future represents the kind of call and response that is [present] throughout Pan-African culture,” he says. “From … the call and response between the preacher in the congregation to hip-hop or any sort of Black music.”

Also in conversation with each other are Wilson’s cyberpunk mask and a pair of levitating roller sneakers — featuring booster rockets for propulsion — by local artist T-DUB Customs, aka Takiyah Ward.  Add the white Wolf Deluxe jacket covered in black ciphers (which calls back to Sneke One’s graffiti and Farrell’s portal) and the artistically distressed sneakers by Seattle designer Shu Jones (formerly at Reebok), and you have a futuristic wardrobe fit for interstellar travel. 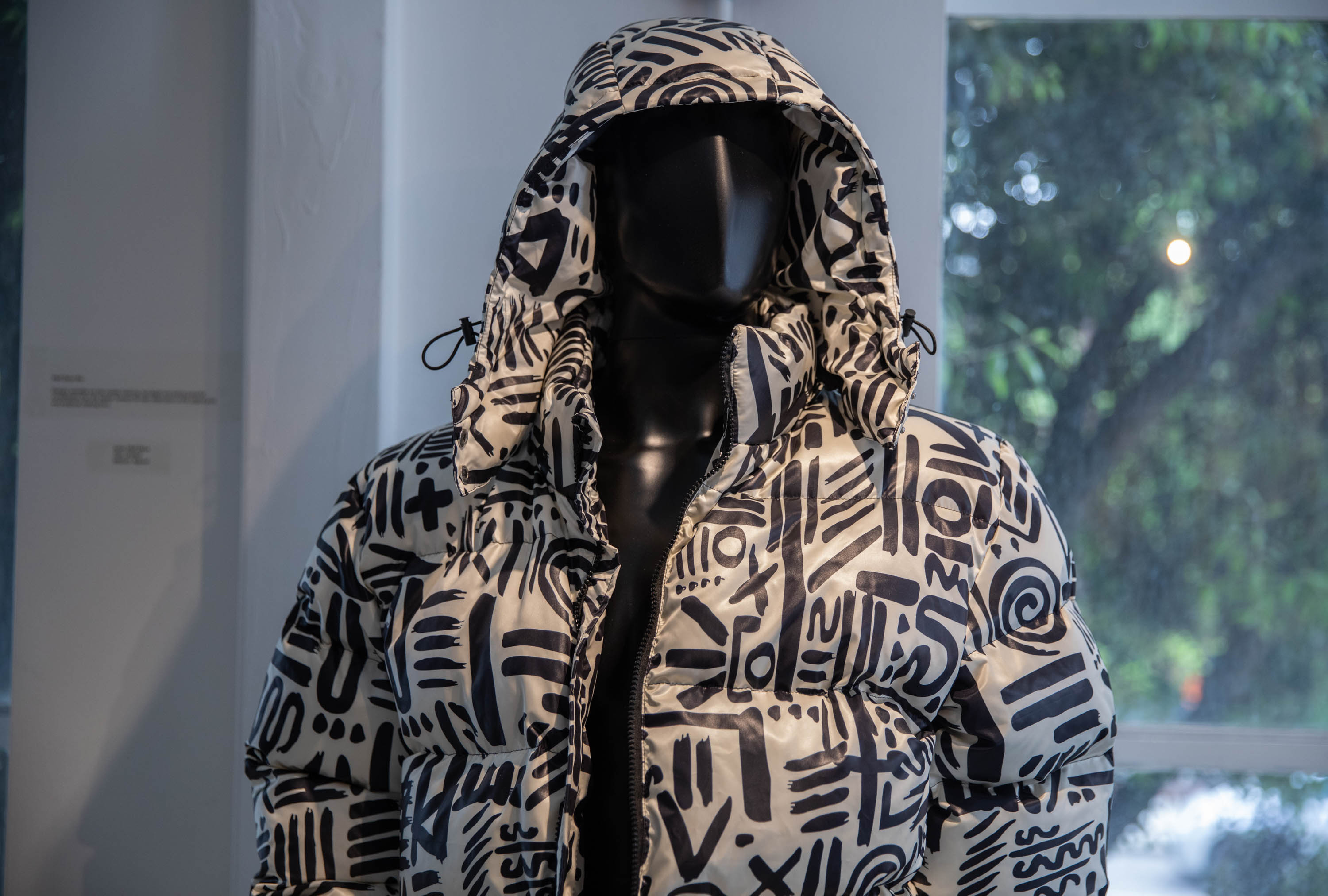 An untitled artwork by Wolf Delux is on view in the exhibit “Holla Back to the Future” at the Museum of Museums in Capitol Hill on Tuesday, June 14, 2022. (Amanda Snyder/ Crosscut)

An untitled artwork by Wolf Delux is on view in the exhibit “Holla Back to the Future” at the Museum of Museums in Capitol Hill on Tuesday, June 14, 2022. (Amanda Snyder/ Crosscut)

Rocket over to MoPOP and you’ll find the upstairs galleries are filled with the garments of a  Wakandan king, queen, shaman, tribal member and warrior.

Wakanda, of course, is a fictional kingdom in East Africa. In Marvel’s Black Panther universe, the small nation has been spared from the destructive forces of colonialism and grown into the most technologically advanced (and eco-friendly) country on the planet. In 2018, the celebrated costume designer Ruth E. Carter, then known for her work with Spike Lee and Ava DuVernay (think: Do the Right Thing and Selma), designed the costumes for the blockbuster movie Black Panther, work for which she’d later win an Oscar.

While the MoPOP exhibit focuses on Black Panther — literally and figuratively the show’s nexus, with the “Vibranium”-laced Black Panther suit of King T’Challa at its heart — it also zooms out to include earlier work. For Carter, the Afrofuturism label is applicable to her other work as well.

“I feel like most of the films that I do have a bit of Afrofuture in them,” Carter tells me as we stand in the darkened exhibition room where mannequins of M’Baku, Nakia, Okoye and T’Challa face us from their raised platform. “Because we’re honoring culture, we’re taking our history, we’re putting it in a movie — and in the case of Black Panther, we're also creating a forward-thinking nation of Wakanda.”

Like Sun, Carter emphasizes that Afrofuturism doesn’t necessarily equal sci-fi. Take Spike Lee movies, like Do The Right Thing. “He’s directing a movie that actually is Black Lives Matter,” Carter continues. “He's experiencing his own version of Afrofuture because … he’s trying to create a world that's more inclusive, and that’s also a part of the Afrofuture.” 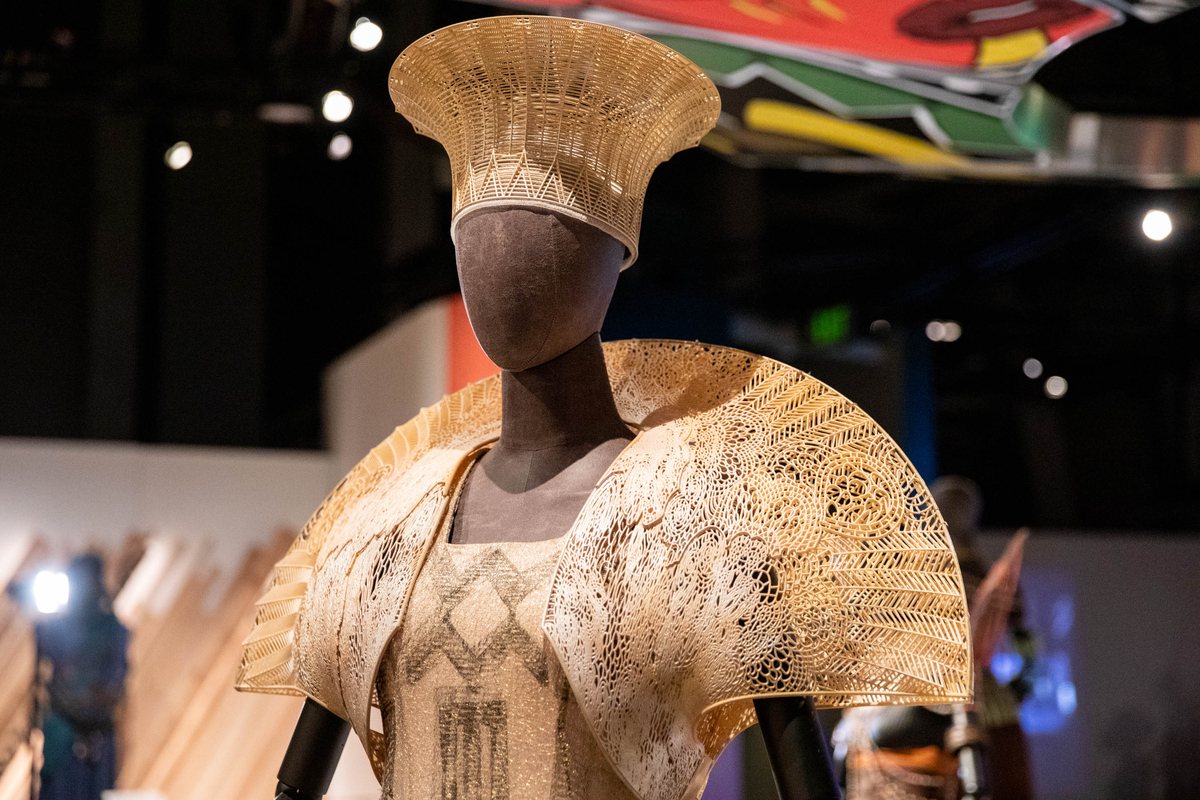 The 3D-printed collar and hat of the Black Panther movie character Queen Ramonda on view in an exhibition exploring the designs of costume designer Ruth E. Carter at Seattle's Museum of Pop Culture. (Amanda Snyder/ Crosscut)

The 3D-printed collar and hat of the Black Panther movie character Queen Ramonda on view in an exhibition exploring the designs of costume designer Ruth E. Carter at Seattle's Museum of Pop Culture. (Amanda Snyder/ Crosscut)

Another good example: the costume for Black Panther’s M’Baku, the leader of the Jabari Tribe, a group that opposes Wakanda’s technology. Inspired by the clothing of the Dogon tribe indigenous to the central plateau of Mali, Carter and her team opted not to use wood but used a vacuform technique (a type of plastic thermoforming) to create molds that were painted to appear like wood. “So in those ways of creating the look, we used modern technologies, and brought in the tribal elements of the Dogon but created a new story of armor,” she says.

But the most technologically advanced and challenging costume was that of Queen Ramonda (played by Angela Bassett), whose mannequin at MoPOP watches regally over visitors, her crown sticking up into the air. Inspired by Zulu headdresses, the regalia was 3D-printed in Europe. “Her crown is one solid piece, and that’s not easy to do because it’s a big piece,” Carter says. “The shoulder mantle was 3D-printed in a machine and it was about eight different pieces that we fused together.”

Also 3D-printed: shoulder pads for basketball player LeBron James, whose black shorts costume is showcased in a glass box like a rarefied art object. Carter designed the futuristic black suit for the LeBron James character in the popular game Fortnite. Players can purchase in-game a digital version of this outfit, called a skin, to deck out their avatars — talk about futuristic.

“It was kind of exciting, because I had never really done a video game before,” Carter says. Working with the costume design company Ironhead Studio, Carter had two lion-shaped epaulets 3D-printed in gold (the felines’ eyes can light up red). “This is a way to show how fashion can be incorporated with a story, with 3D printing, with future thinking design,” Carter adds.

In Fortnite and Black Panther — and in Hollaback to the Future at MoM — the art and clothing on view are just a starting point, a portal into new dimensions.

In his exhibit, Sun says, the art is put on the pedestal —where it belongs. “And it breaks the expectations that people have, or the stereotypes that people may have about Blackness, Black art, African art, Pan-African [culture] in general,” Sun says. “Because as you go through, you’re seeing visions of these entire worlds.”

Become a member today — and get great benefits.