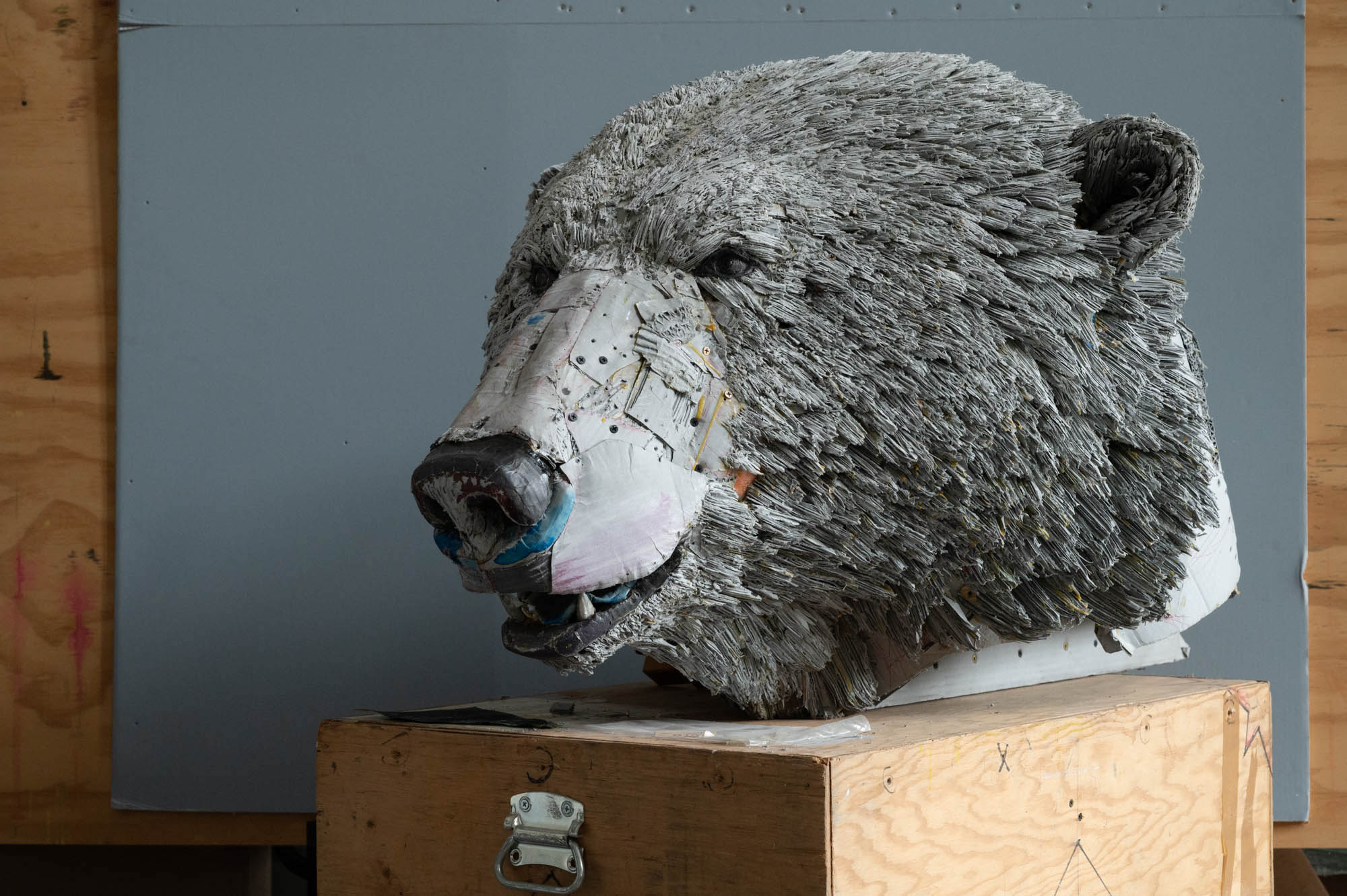 We’ve arrived at the last days of 2022, with the holidays coming in hot and heavy and draped with perhaps a little too much tinsel. Whether or not you’re a fan of the festive elfin business, I encourage you to celebrate the real-world magic of the creative process — as seen in several current shows around town.

At Traver Gallery downtown, longtime Vashon artist Scott Fife presents a new show of captivating work, Cardboard Kingdom (through Dec. 23). Through a process of trimming, gluing, folding and screwing together castoff scraps of archival gray cardboard, the artist creates expressive animal and human heads. In the past, these have included oversized busts of famous faces, from Bruce Lee to Abe Lincoln to Kurt Cobain (the last of which was a favorite of mine from a Seattle Art Museum show in 2010).

But aside from a tousled bust of “Young Hemingway,” the current show emphasizes animals. With a lioness, horse, jaguar, polar bear and others, Fife nods to the myths humans build around these creatures as well as our interconnectedness. His keen skill at manipulating a simple paper product is evident in each animal’s face — rather than a general idea of a polar bear we see an individual one, with battle scars and backstory.

I’ve been a fan of Fife’s figures for many years; when I interviewed him in 2011, he spoke about what draws him to create bears specifically. “The bears, while not vanishing at this time, may soon become a memory of the wilderness, of the West before settlement,” he told me. “There is melancholy to it — a predator that’s almost defenseless.”

These pieces are highly crafted (note the detailed cardboard fur) but seemingly raw, with a patchworked palpability. The beasts lie around on supports as if still in progress, their stories not yet finished. 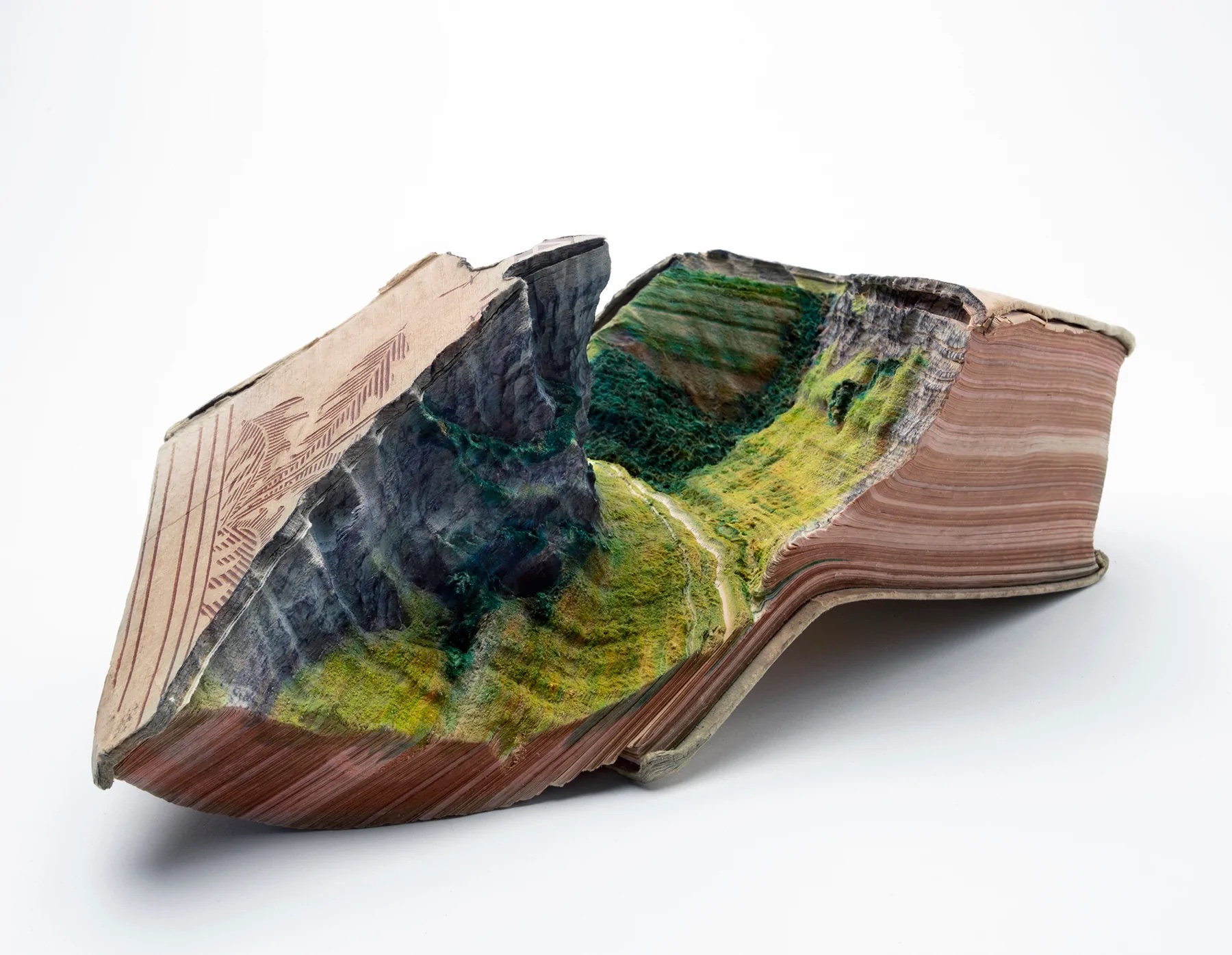 There’s more paper-manipulation magic on view at Foster/White Gallery in Pioneer Square, where Montreal artist Guy Laramée is showing a series of his stunning sculptures. Quebrada (through January 2023) features what Laramée calls “bookworks,” which he makes by sandblasting and carving old books into magnificent topographies. In Spanish, quebrada means “ravine,” and there are many such landscapes here, miraculously emerging from the bound tomes thanks to the paint he meticulously applies to the cut pages.

It’s no surprise to learn that Laramée has a background in stage design — this world-building in miniature is intended to make you believe in the cliffs, hills and riverbeds. Laramée has said he loves books, but he also likes exploring what emerges when we cut away what we think we need. (Worth considering when making cut-paper snowflakes too.) When we opt out of the constant intake of information, might we find a verdant valley of the mind? 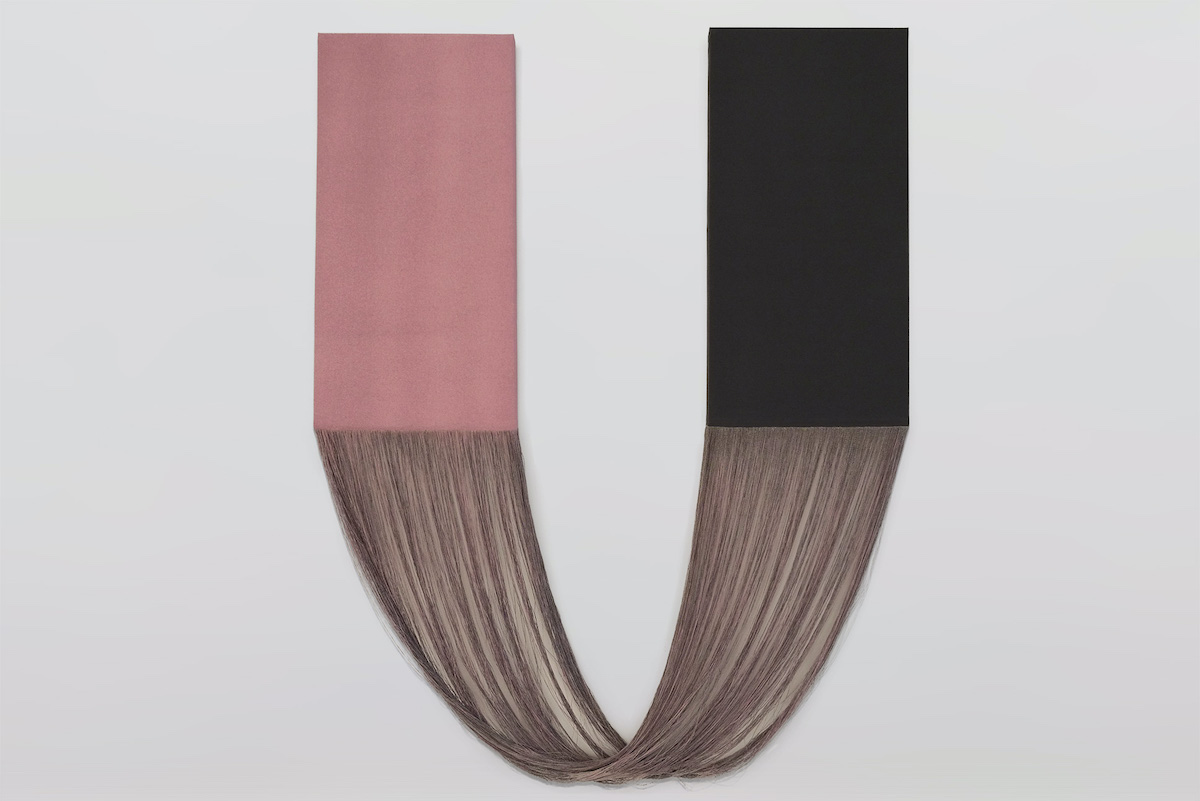 Ko Kirk Yamahira paints canvases and then carefully unthreads them, leaving a loose middle section. His solo show is on view in Georgetown. (Studio e)

Ko Kirk Yamahira paints canvases and then carefully unthreads them, leaving a loose middle section. His solo show is on view in Georgetown. (Studio e)

A similar philosophy of abundance by way of destruction is on view at Studio e in Georgetown for just a few more days. Seattle artist Ko Kirk Yamahira is presenting a solo show of his wall sculptures made from canvases (through Dec. 3). Instead of carving books, Yamahira carefully dethreads the center sections of the standard painting surfaces, leaving a drooping, swooping cascade of threads in between. In doing so, Yamahira gives the once-stiff canvases a fresh kind of agency, especially since they can be arranged in any shape.

And one more take on the beauty that can come from cutting away: In the new group show Pathways (through Jan. 11) at Winston Wächter Gallery in South Lake Union, Seattle artist Joe Rudko reveals his talent for transforming vintage and found snapshots into abstract tableaus. Cutting the photos down to essential chunks of color — containing glimpses of faces, grass, living rooms, streets — he gives these once-abandoned images new life as vibrant geometric collages.

Rudko’s criss-cross patterns resemble quilts that, thanks to a trick of the eye, seem to jiggle and twist. The vibe is exuberant, as if all these long-lost subjects are rubbing elbows at a big party, making new friends across time and space. 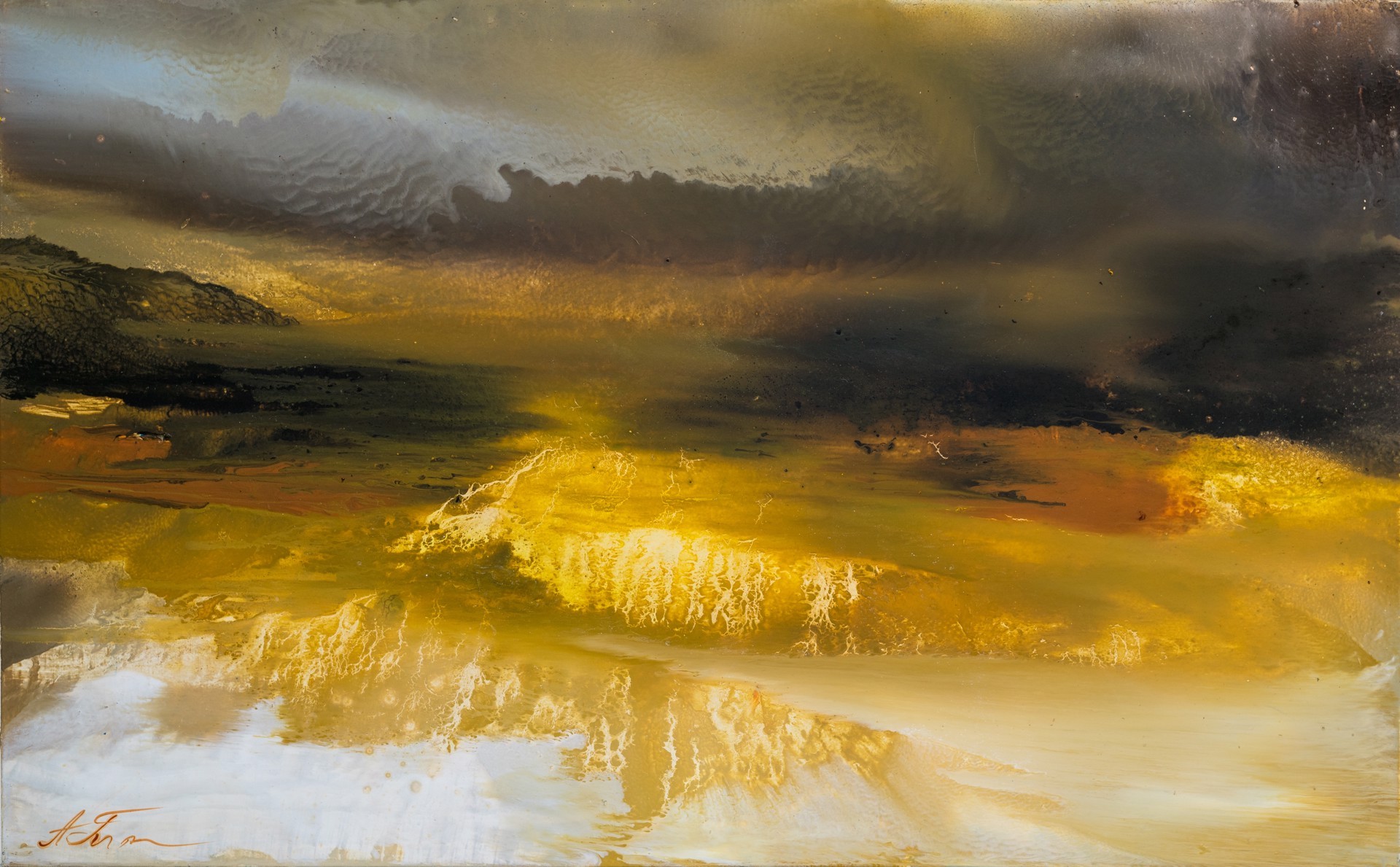 There is certainly holiday hoopla to be had, if that’s your thing. Take a look at our just-published list of Things to Do in December and you’ll find plenty of bell-jingling and nutcracking and ghosts of Christmas past, not to mention a choral ode to the planets and a Chanukah-themed jazz concert with latkes.

But some folks are just looking for a little peace on earth during this hectic season. If that’s you, I recommend grabbing a few moments of calm in galleries showing placid, pensive works.

If you’re hitting Pioneer Square’s First Thursday art walk this evening, (bundle up! and) head to ArtXChange Gallery to experience large-scale, hazy landscapes by Russian-born, locally based artist Alla Goniodsky. In Between Dreams (through Jan. 21), the painter presents her atmospheric, glowy visions of an imagined place between sleep and wakefulness, known and unknown. 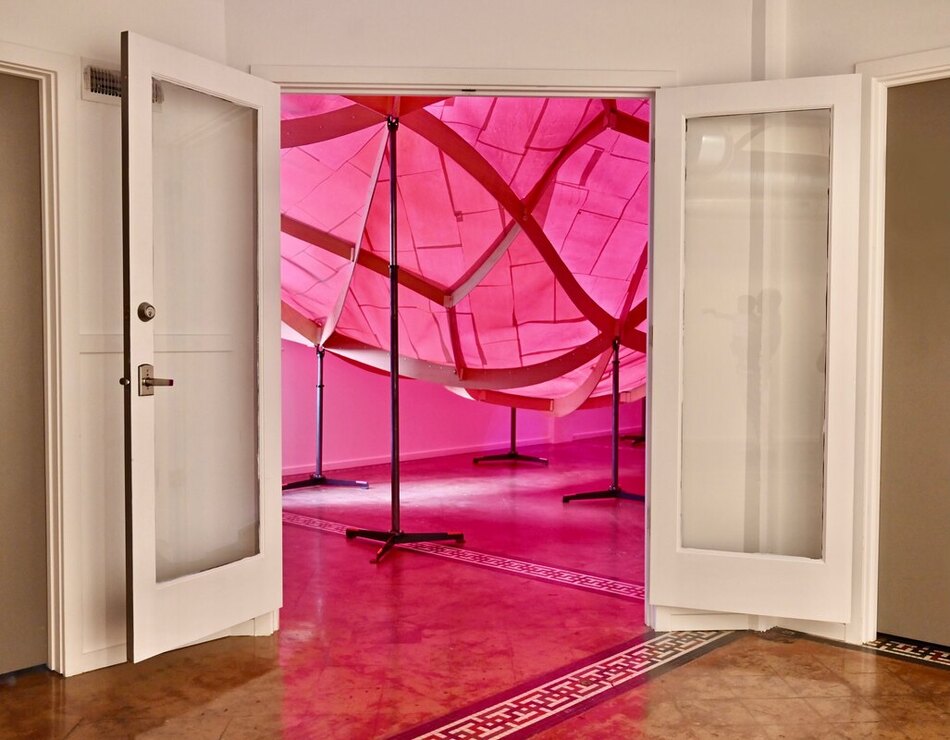 You’ll find quiet still lifes and streetscapes at nearby Figure | Ground Gallery, where the new group show Shapes of Light features paintings by artists who learned their craft at art schools in Israel. See especially Osnat Oliva’s soft flowers that are somehow both cubist and fuzzy.

Guy Laramée, the book sculptor, is also showing paintings at Foster/White. His 13 Views of a Stay in Brasil (through January) carries us far away from end-of-year madness and up into the gray-blue cool of mountain ranges topped with cotton-batting cloudscapes.

And if you’re still seeking calm, walk over to Method Gallery and peer into the warm pinkscape of Surface (through Dec. 17). An immersive installation by artists Lalitha Bandaru, Lindsey Champlin and Henry Cowdery, this undulating swath of raspberry-hued fabric consumes the entire gallery space. It doesn’t ask you to make a shopping list or write holiday cards. It doesn’t even want you to think. Just sink into the pink.