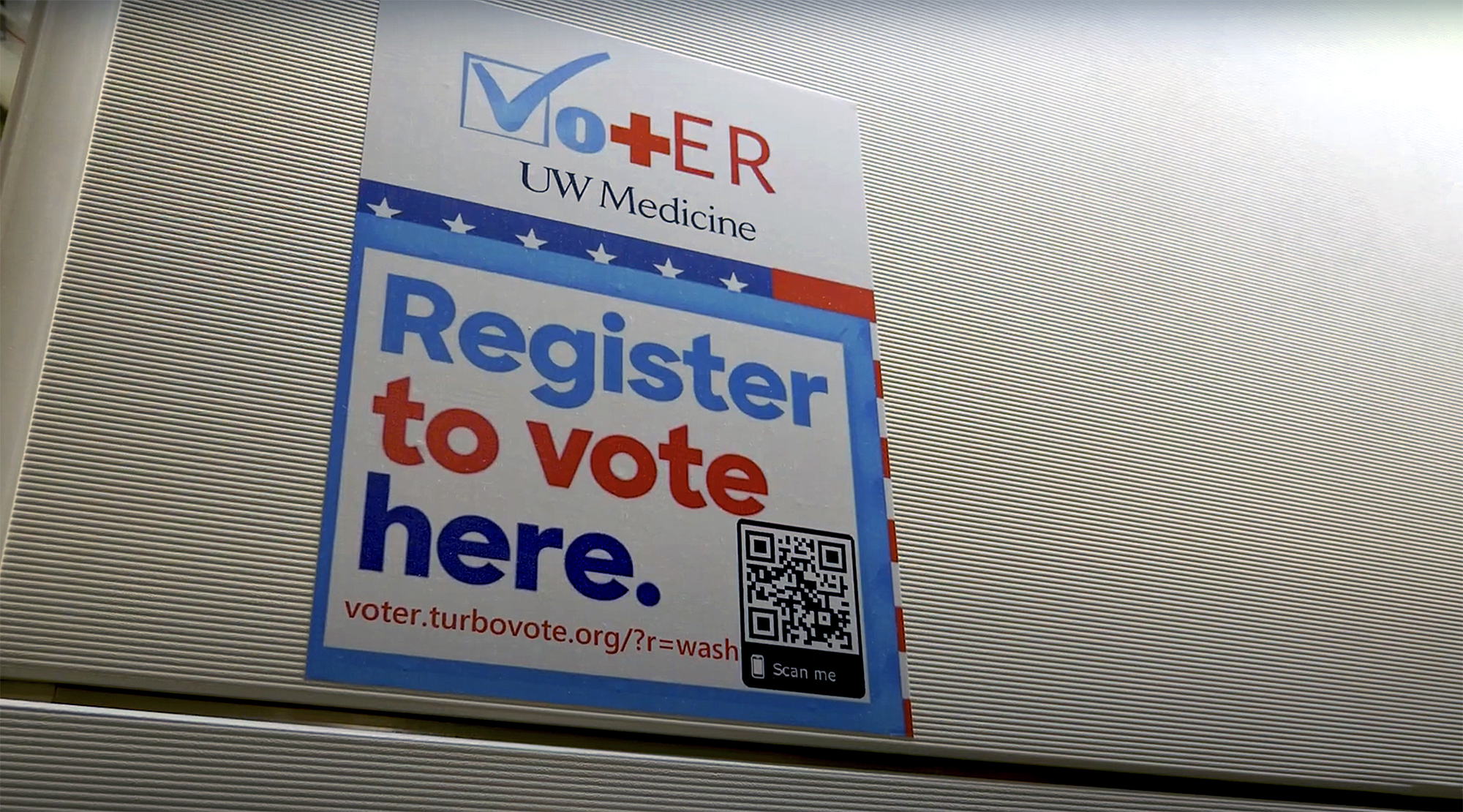 Harborview Medical Center has set up a voter registration kiosk in its emergency department to allow patients an avenue to acquire a ballot, without leaving the hospital. (UW Medicine)

Logan Matz, 26, has felt the effect of painkillers while hospitalized for more than two weeks at Swedish First Hill, fighting off a multidrug-resistant blood infection after having his gallbladder and part of his liver removed.

Despite it all, he voted.

“I didn't actually know for sure whether I [would] need to vote from the hospital, since I wasn't really getting any sort of discharge estimates from my care team at the time,” says Matz, a Bellevue resident who is an English as a second language and cultural orientation instructor with the Refugee Resettlement Office. “I just knew my ballot had arrived at my house, and I wanted to make sure that it got in a box or the mail well before Election Day.” 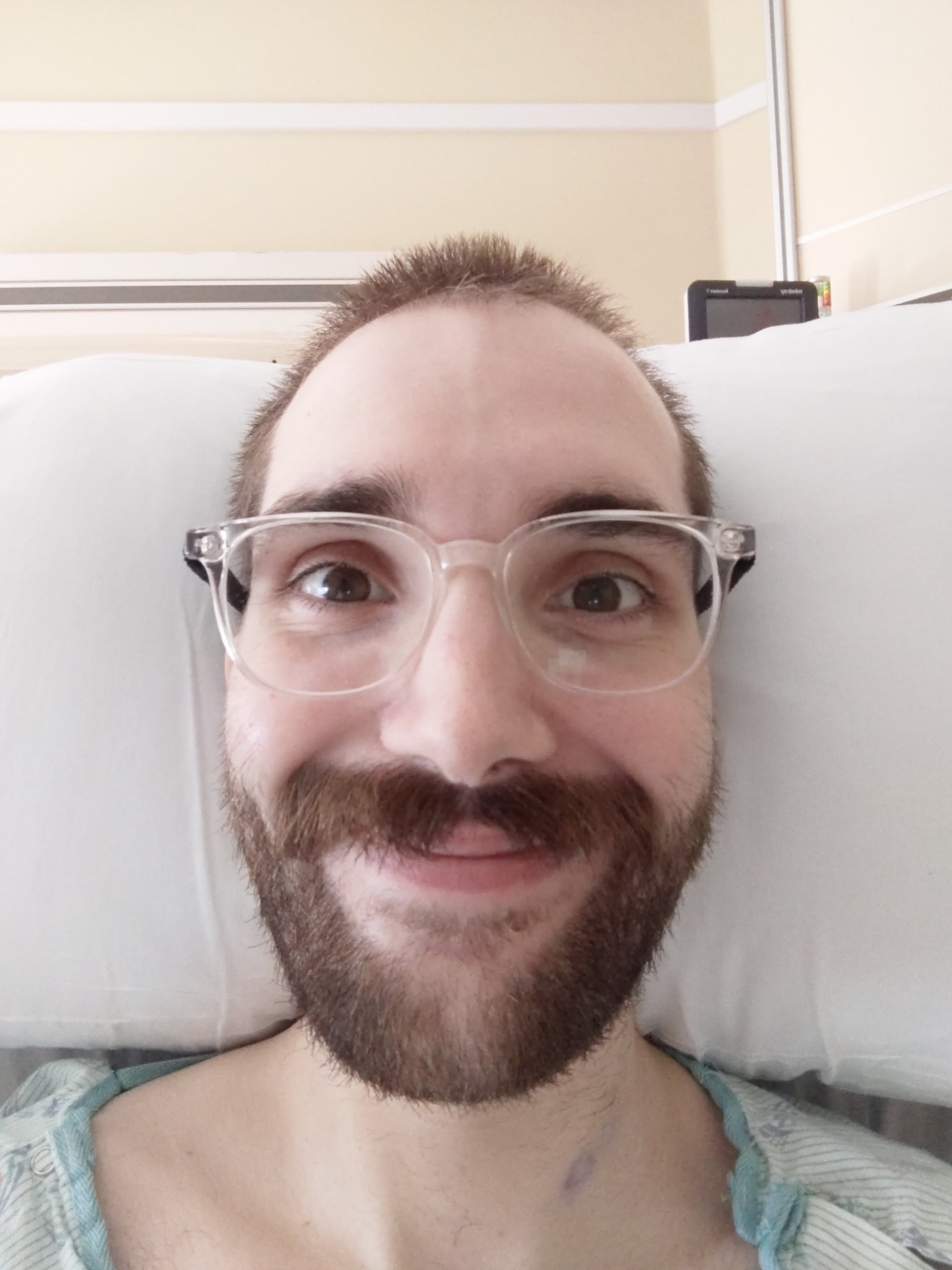 But with a pandemic driving hospitalization rates higher in 2020, we wondered if patients and doctors face additional hurdles to voting from King County hospitals, especially if they wait to vote until the last minute, or if infection risks create barriers to those options. According to Kristen Maki with the Washington Department of Health, as of Wednesday 424 of the 14,540 licensed hospital beds in the state are occupied by suspected or confirmed COVID-19 cases.

Groups such as Human Rights Watch have tapped voting access for hospitalized patients as a key concern for protecting voting rights in the pandemic.

“We do actually regularly get calls from folks who are maybe in [the] hospital or in sort of a situation where they cannot access their ballot or access things that they need,” says Kendall LeVan Hodson, chief of staff with King County Elections. “This is something that we've certainly thought a lot about.”

The short of it: So long as you have your identification and are in a hospital prepared to facilitate voting, you can do so, ⁠even if you don’t have your ballot with you. Even visitors who aren’t admitted can take advantage of nonpartisan hospital initiatives helping to get out the vote.

Voting from a hospital bed

Matz, who has voted in Washington state for the past eight years, voted with help from his father, who was able to be with him at the hospital. Matz’s father brought him his ballot from home (something patients in other states can sometimes acquire only with a physician’s signature).

“It was really easy,” he says. He did so during a lull in his fluctuating pain levels. “It was a little too much mentally to read through the Voters’ Pamphlet at the time,” he says, “[so] I had my dad read the candidate statements and for/against statements out loud to me.”

Matz is thankful to have access to voting through the means the country provides.

“I think if you’re literate and able-bodied, we have really good voting access here in King County. I was thankful that my dad was there,” Matz says. “I think it was a much easier and more enjoyable experience than these 12-hour-long voting lines I've been hearing about in other states.” 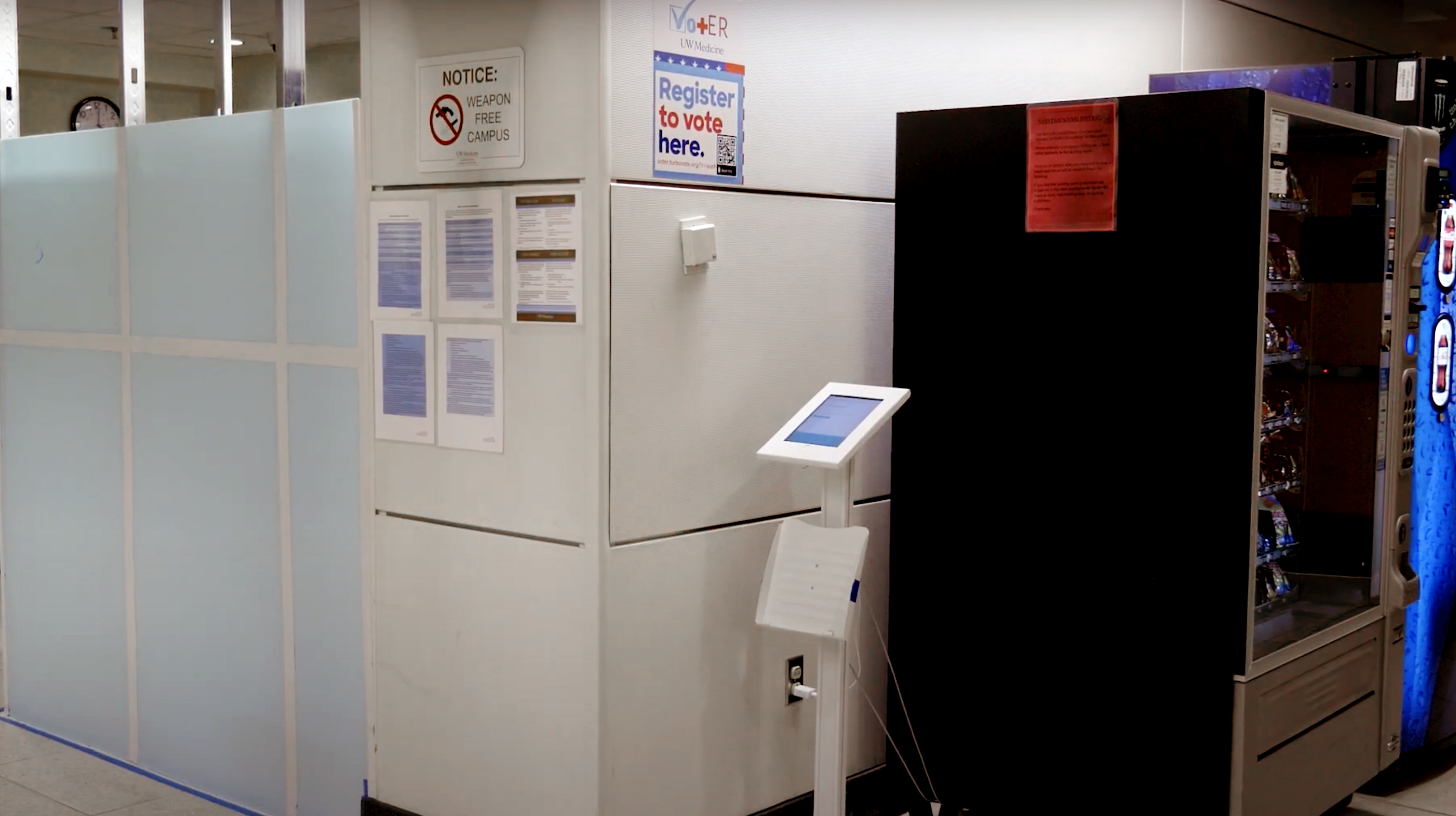 Not everyone is lucky enough to have parents with them at the hospital, especially with visitation limits imposed by a pandemic. In those cases, patients can rely on hospital staff to help coordinate with King County Elections.

What has worked best in the past, LeVan Hodson says, is when patients work with hospital administrative staff and nurses to have their ballot printed out online. “It's a little bit of an arts and crafts project, and you kind of have to cut out the label of the envelope, but it typically works really well,” she says.

LeVan Hodson says the county can mail voter ballots or replacement ballots anywhere, including hospitals. But with less than a week left before the election, given deadlines, King County started recommending the printed ballot as a replacement tool for all voters whose ballots have been lost or damaged in some way, as opposed to requesting a new mailed ballot or voting in person.

“If none of those things work, we kind of always tell folks to [...] just give us a call and we'll figure out what the right solution is for that particular individual,” LeVan Hodson says.

She says that to her knowledge, no one has called in to the elections phone banks with questions about how they should vote while in the hospital with a COVID-19 infection. But since most people don’t voluntarily disclose details of their medical history to elections staff, she can’t be sure.

LeVan Hodson says the self-printed ballot option is frequently used; military and overseas voters can even return their ballots electronically. In-town voters who aren’t indisposed can also request to have ballots preprinted at vote centers if necessary. 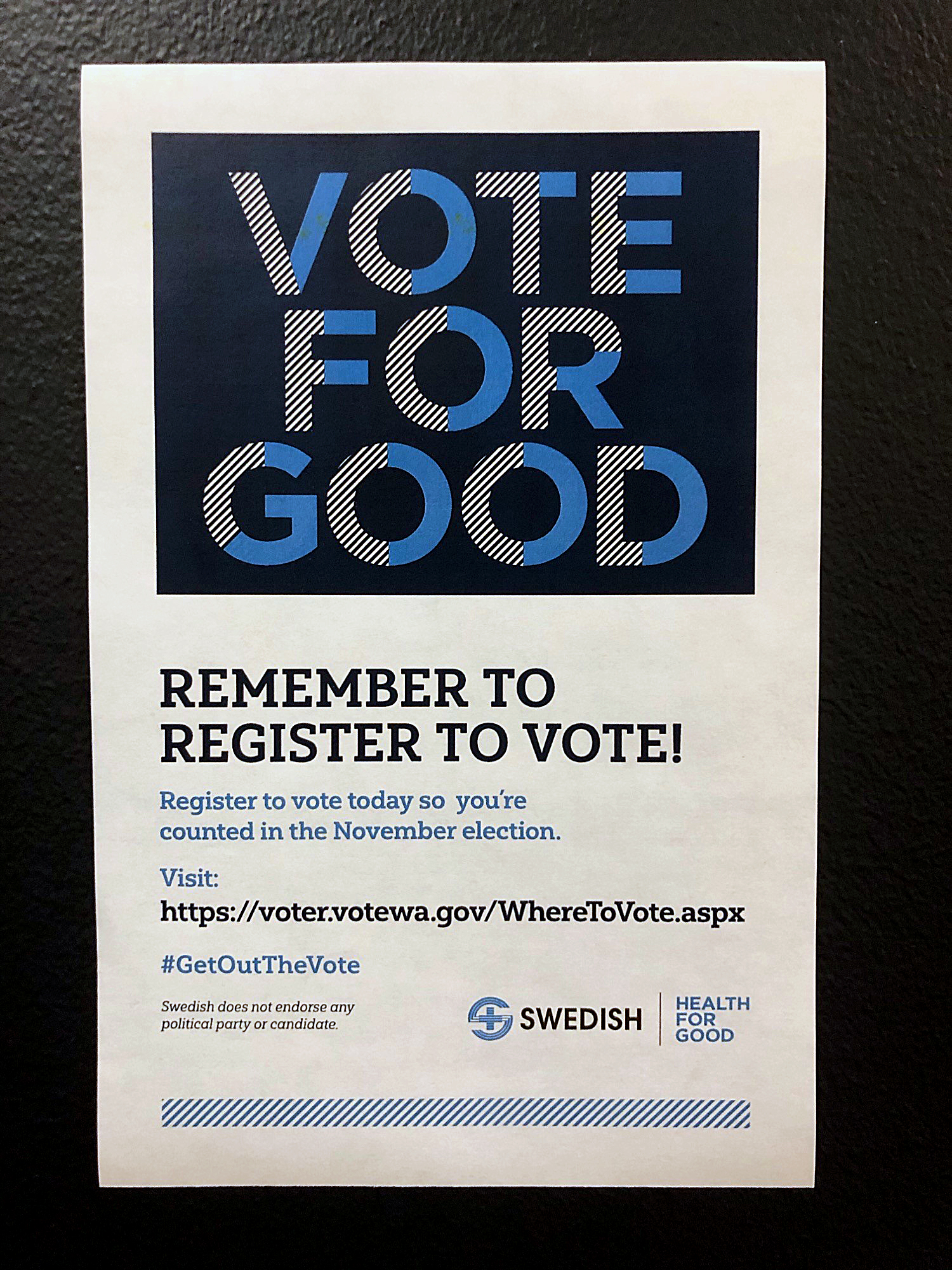 “We feel very lucky that for all the work that we have to do, we feel like we're probably one of the best-positioned jurisdictions in the country to handle an election during a pandemic, so certainly we've felt very lucky here to have great laws and great infrastructure in place,” LeVan Hodson says.

However, access varies depending on the hospital. “If inpatients don’t have their ballots, then we will work with the King County staff to print them, and they can fill them out and we can deliver them,” says Susan Gregg, director of media relations at UW Medicine marketing and communications. .

Swedish hospital allows each patient a supporter (Logan Matz relied on his father). “[They] may bring the ballot to our hospitals to be filled out on site and subsequently mailed for them,” says spokesperson Tiffany Moss.

Other area hospitals Crosscut contacted either weren’t aware of special voting procedures in place or did not respond by press time.

At least one nurse has already tested out this practice.

Area registered nurse Julia (who asked that her last name and employer be withheld) had a patient a few weeks ago who asked her whether there was a way for him to vote. He was eligible but didn’t have access to his ballot, which had been mailed to his home address.

Patients don’t have regular access to computers or phones, so it was up to staff like her to figure out how to get a printed ballot. After researching the King County elections website, she figured out she could print his ballot at the nurses’ station for him to fill out.

“I offered to send it in the mail for him but he said he was concerned it wouldn’t get in on time,” she says, “so I offered to drop it at the closest ballot drop box, which he preferred.”

Julia took a video of herself dropping off the ballot, to give him proof.

The experience inspired her to ask her manager whether she could come in on a day off to see if other patients wanted assistance with their ballots. “So I’m planning to come into work on Monday to help other patients who are registered voters get their ballots in,” she says.

She was concerned that delivering a ballots could have the appearance of voter fraud. But Washington allows anyone to drop off another person’s ballot with that person’s permission.

“I wonder how it would look to an outsider if they saw me dropping off multiple ballots, like that it could look suspicious,” she says. “I feel like there’s a real need to help hospitalized patients exercise their right to vote. I’ve worked in healthcare for about eight years and I’ve seen how much hospitalized people are overlooked as part of the voting block. In previous years I’ve wondered if there was some way to help out but never took the initiative to look into it. I feel good knowing this year I’ve helped at least one patient take part in the election.”

A push for registration

As key community hubs, hospitals in King County have also launched programs to enhance people’s ability to register to vote.

With help from Dr. Herbie Duber, UW Harborview emergency department was one of the first in the country to adopt VotER, a program that sets up voter registration kiosks in hospitals, as well as QR codes that can be scanned for voting information.

Duber says he and other doctors see firsthand how COVID and other voting barriers disproportionately impact the communities that rely on their care.

“In the emergency department, we see a disproportionate number of people who are disenfranchised,” says Duber, the head of the Section of Population Health in UW’s Department of Emergency Medicine. “They tend to be from communities of color ⁠— often young, often immigrant populations. And because that's a group that often doesn't vote, we feel like, particularly as an institution that serves those individuals, let’s empower them and give them a voice.”

UW says it will have data available next week regarding how many voters used its VotER registration system.

Swedish launched an educational campaign called Vote for Health, which encourages patients, caregivers and anyone following Swedish on social media to register to vote. It also provides information on issues that affect the health care industry. Swedish’s Moss says a flyer with information about the program is being shared with patients in clinics, and is part of emergency department discharge paperwork.

“Health care is often on the ballot, right?” Duber says, “whether it's very obvious in terms of Harborview and Prop One [regarding hospital funding], or less obvious in terms of individual candidates' health plans. And so it is important as physicians that we give people the opportunity to have a voice in that.”

“This is not a partisan thing,” he says.