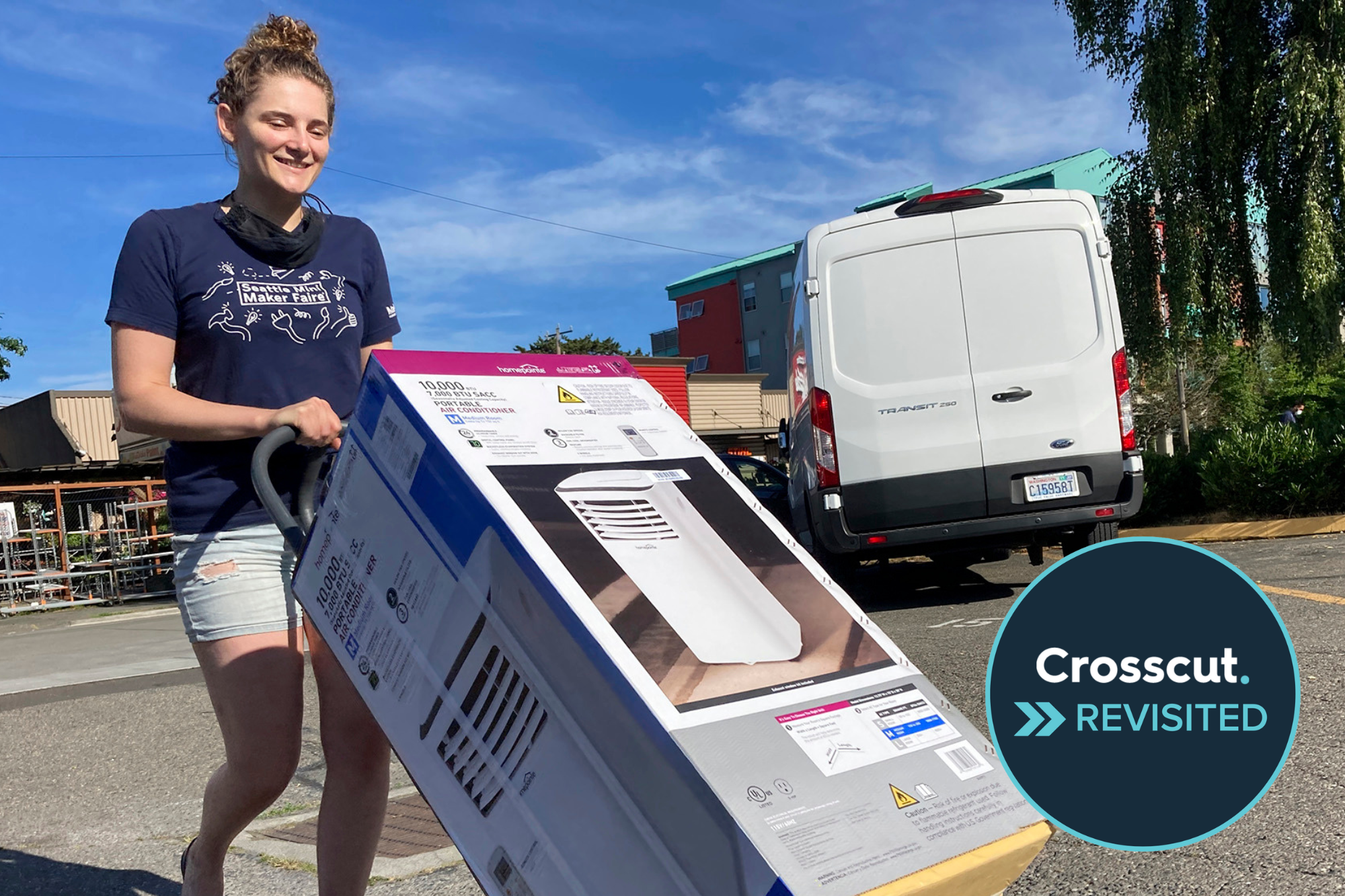 When Fred Woo and his family moved from San Diego to Seattle a decade ago, they brought their portable air conditioning unit with them, thinking it wouldn’t be necessary in our historically temperate climate. They were right — for a while.

Not only are Woo and his family using their air conditioning every year, but they had to upgrade to a better unit. After a few years of regularly sweating the heat, Seattleites like Woo are accepting that the climate they knew is no longer. Relying on A/C creates its own issues: It adds pressure on electric grids that are liable to buckle under stress, and is not yet equitably accessible.

But in the near term, homeowners and renters are rapidly installing more mobile and permanent residential air conditioning tools to survive — sometimes with help from state and city assistance programs — to the point that Seattle is no longer the least air conditioned major U.S. metro area.

“I’ve heard lots of people in the PNW say, almost with pride, that they don’t have air conditioning at home,” Woo said via email. “I think we all need to realize that it’s going to get hotter for longer each year and we need to have plans to cope with it.”

Seattle is getting more air conditioned

The 2021 American Housing Survey, released by the U.S. Census Bureau this September, shows a big jump in the percentage of Seattle homes with access to air conditioning over the past decade.

Of the 1.6 million housing units in the Seattle area in 2021, about 844,400 — roughly 53% — had a primary air conditioning source, with about 21% using central air and nearly 30% relying on room air conditioning. In San Francisco, which the Census survey found to be the least air conditioned metro area, about 45% of homes have A/C.

Electric heat pumps, which provide cooling as well as heating, are the primary or supplemental source of heat for 5.2% and 1% of Seattle-area homes, respectively. American Housing Survey data suggest an addition of 2,600 heat pumps to the area over the past two years.

Seattle Department of Construction and Inspections data show that in 2022 alone, the city received 8,435 applications for residential mechanical permits involving heat pumps, of which 804 were for multifamily housing.

About 30% of Washington's nearly 3 million households use central A/C and 25% use individual (or room-based) A/C units, according to the 2020 Residential Energy Consumption Survey.

The interest in air conditioning is reflected in the workloads of local heating and cooling companies. As demand for air conditioning, particularly heat pumps, increases, spring and summer have become the busiest work seasons for Evergreen Home Heating & Energy over the past five years, said Jamey Stephens, the company’s general manager.

Some homeowners who called during the summer had to wait several months from their initial call for installation.

“We’ve done everything we can to try to keep up with the demand, adding skilled installers and technicians, but it’s been tough!” Stephens wrote in an email.

The City of Seattle has never closely tracked air conditioning installations, said Kate Hutton of the Office of Emergency Management.

“The data that we might be able to uncover (though it would take a lot of work) would still likely tell us that the gap in residential A/C is closing far more rapidly at the upper and middle income levels than among our most vulnerable residents,” Hutton shared via email.

Plenty more people want air conditioning than can access it, and cost plays a large role.

About 658,300 Seattle respondents to the American Housing Survey identified as renters, who live in about one-third of all air-conditioned homes in the metro area. A majority rely on room-based air conditioning, but mobile units have their limitations. The machines are designed to cool spaces only about 20 degrees, which doesn’t always cut it in a heat wave. However, they are cheaper and easier to install than central air.

Stone Bear had two portable A/C units in their North Seattle rental unit last year, but added a third this year. Horizontal-sliding windows and disability made it impossible for their household to use window-based units, they said, and they found the portable units less efficient than window units.

Kelsey Hamlin, a South Seattle renter, lives in a mixed-income building that has air conditioning in its hallways but not in individual apartments. The building also offers tenants the option to rent a limited number of A/C units for $50 per month, for a minimum of four months, on top of their monthly rent and utilities. Some mobile units cost $200 outright, so Hamlin opted to purchase her own.

Even when people are able to purchase permanent cooling solutions, it can take months to receive one. Brandon Rotkel said he paid up front for a mini-split heat pump in August, with a planned installation date in December. As of mid-December, it still hadn’t come in.

When you dig into heat wave injury data, cooling inequities become clear: Extreme heat most seriously affects people who are low-income, unhoused, seniors or those with health conditions and disabilities. Seattleites who are Black, Indigenous and people of color are also deeply impacted, in large part due to systemic racism that historically influenced urban planning and homeownership.

The Washington state arm of the Low-Income Home Energy Assistance Program (LiHEAP), a federal-level program helping low-income Americans afford heating and energy costs, started offering mobile air conditioning unit reimbursement in October 2021 hoping to meet the A/C needs of renters and people living in multi-unit buildings. The Department of Commerce, which manages LiHEAP for the state, reported getting a lot of interest: 50 to 100 calls a day about air conditioning in the spring and summer.

But it still costs money to power A/C units. The LiHEAP program provided $500 hardship benefits to people who received the units, to cover some of those electric bills.

In its first full year, the program delivered more than 5,000 mobile air conditioners, with most going to King County. Conservatively, they spent at least $500,000 on air conditioning, including assisting homeowners with heat pump conversions; Sarensen estimates about 10% of the population they serve received A/C.

According to the American Housing Survey, air conditioning access has changed for both owners and renters over the years. In 2013, 18% of rental homes and 39% of owned homes in the Seattle area had A/C, while in 2021, access was 41% and 62% respectively.

Homes qualifying below 50% of the federal poverty level are also reporting more access to air conditioning. In 2021, about 43% of Seattle homes had access, compared to about 25% in 2013.

Community agencies like Byrd Barr Place and Multi-Service Center in King County served as LiHEAP middlemen, helping people fill out program applications and purchase the units, often through Amazon Prime and Amazon Business accounts. About half of the agencies focused their programs on seniors and people with disabilities exclusively, while the rest served anyone who qualified for LiHEAP regularly.

Multi-Service Center became involved with cooling services over the summer, and was able to provide 160 A/C units costing $78,763 total in August and the first few weeks of September. Sarah McNiesh of Multi-Service Center said they anticipate serving more people in the second year of the program, which started in October, and plan to prioritize A/C units for about 2,000 seniors who have previously received energy assistance through LiHEAP. Additional units will become available on a first-come, first-serve basis.

Sarensen has seen momentum behind work to secure the Washington equivalent of Oregon’s law establishing tenants’ rights to air conditioning. Participants in the LiHEAP program require a landlord’s consent to install a unit if they live in a high-rise structure.

The Clean Heat Program, through the Seattle Office of Sustainability and Environment, has been providing heat pump rebates to low- and middle-income residents moving away from oil-fueled heat, and just hit a milestone of 1,000 rebates. All new buildings are required to be fossil-fuel-free, and the city’s Building Performance Standards require buildings to eventually become net-zero, said Kristin Brown of the sustainability office.

Sarensen is hoping people put in requests for air conditioning before it gets hot, when prices are lower due to less demand.

“I think we will save money and be able to purchase more units if people purchase them early,” he said.