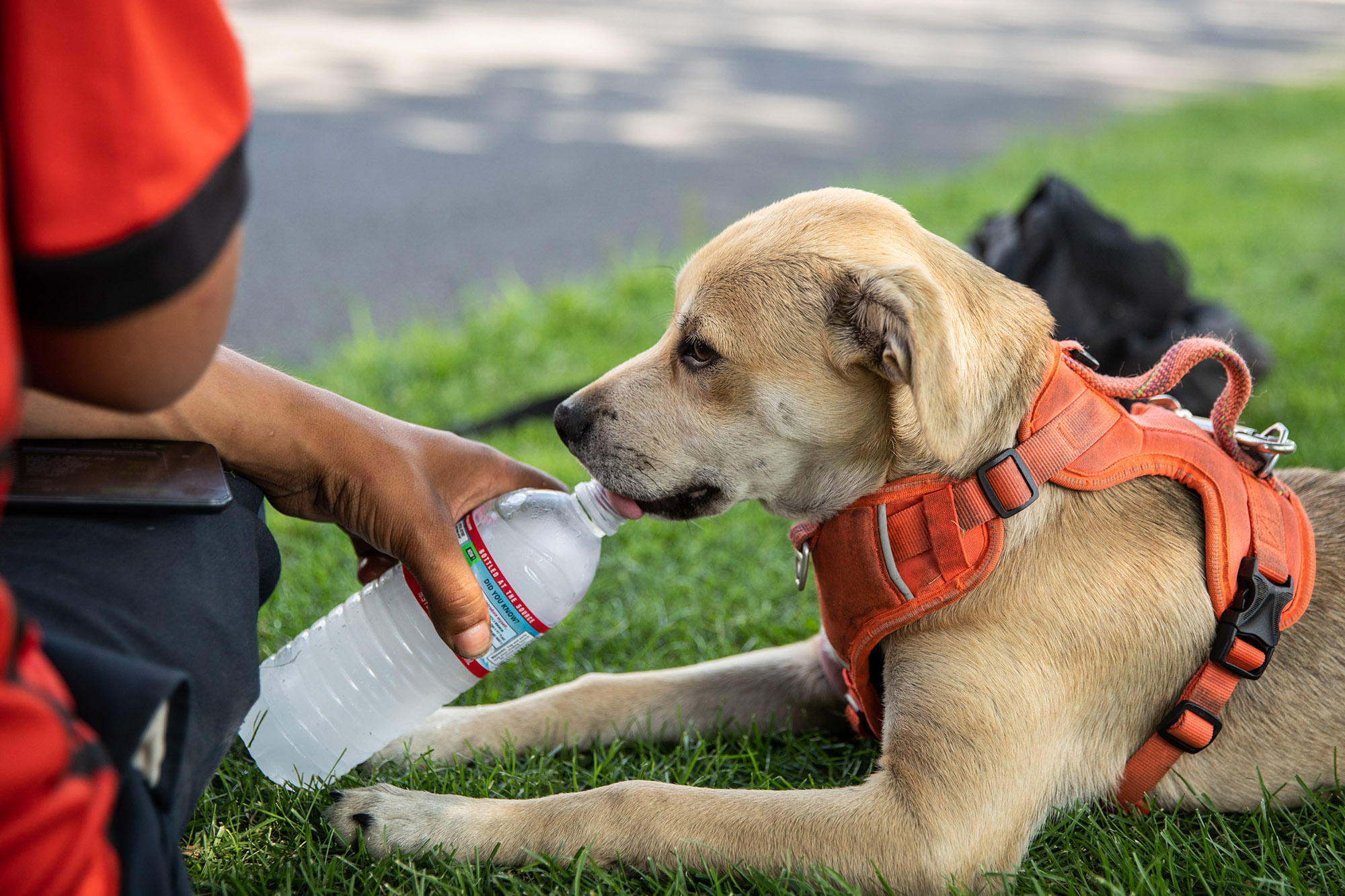 Eastern Washington has more of a 'heat culture' than Western Washington. Dogs like Kingsley can be seen licking iced bottle water supplied from an aid station on the corner of Naches Avenue and Pendleton Way in Yakima on Wednesday July 27, 2022. (Amanda Snyder/ Crosscut)

No one loves being told they’re wrong — myself included! But we are living in a climate crisis and pandemic, and many long-held strategies for living well on this planet are becoming obsolete.

Accepting that some Pacific Northwest lifestyle choices aren’t sustainable could be one of the most important steps toward protecting our health here.

I reported on the pandemic for a long time and recently have again put myself in the less-than enviable position of giving people health information they need but are resistant to: strategies for staying cool during hot weather.

Western Washington, historically, has been a pretty temperate place. I moved here from the Midwest, where learning to get by in triple-digit temperatures and humidity was a fact of life, and was extremely smug when I heard some people worried about high-80s forecasts a few years ago. I was prepared to flex some heat-resistant superpowers, working out in the dry heat of the day and dropping “awwwww if you think THIS is hot… ” in every conversation.

After one particularly hot evening followed an unexpectedly hot day, I put a blowup mattress on the lowest floor of my living space in a last-ditch effort to chill out, to no avail. I realized I wasn’t going to hack it without a mobile air conditioning unit in that sauna of a living space (and was lucky enough to be able to buy one), and that I needed to check my ego and revisit some long-held assumptions about living well in the PNW.

What I’d failed to account for is heat acclimatization and preparedness. The Midwest has a culture of heat. Seattle does not. 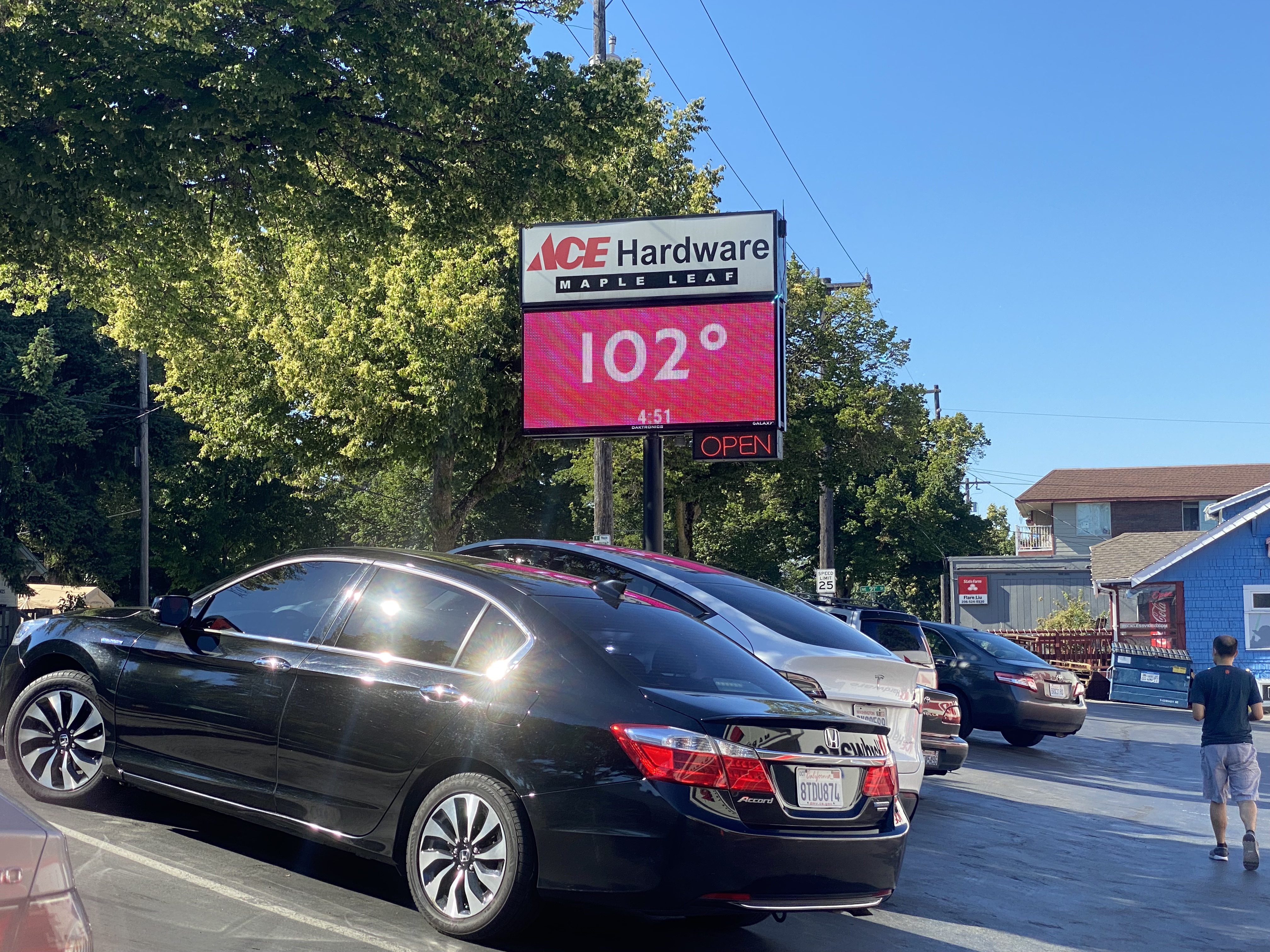 A sign outside a hardware store in Seattle's Maple Leaf neighborhood declares eye-popping temperatures during a heat dome on June 27, 2021. (Hannah Weinberger/Crosscut)

A sign outside a hardware store in Seattle's Maple Leaf neighborhood declares eye-popping temperatures during a heat dome on June 27, 2021. (Hannah Weinberger/Crosscut)

In Ohio, where I’m from, our summers are long and relentless and so humid that it’s hard to offload heat through sweat. But most people have air conditioning (though air conditioning equity issues abound, as they do here). People know to close their windows during the day, and to let in cool nighttime air that helps bodies recover from harsh daytime hours. Ice machines are mandatory and putting out lawn sprinklers to mist early-morning walkers, runners and cyclists is standard etiquette. And the heat doesn’t come out of nowhere — it can take weeks for our bodies to acclimatize to heat, and that Seattle summer, I hadn’t gotten enough lead time.

And yet, when I reported out stories on extreme heat preparedness and tips to stay safe (though perhaps not comfortable) even without air conditioning, many readers told me Crosscut was overreacting. We only have a few hot days a year! Air conditioning is overkill! We’ve never needed air conditioners before!

But we’re experiencing new climate risks. Around the world, climate change is not only boosting the number and intensity of hot days, but also lengthening the summer season. We’re more liable to experience heat waves earlier in the season — when we haven’t had as much time to get used to heat — and heatwaves that last longer. Even a couple successive days in the 90s can strain bodies to their breaking points. We’re usually able to keep our homes cool by letting in cool nighttime air. But nighttime temperatures are slowly rising, especially in urban areas with less shade, making it harder to find relief.

Accepting that our environment is changing — that the Northwest glaciers are melting, that mosquitoes are more active, that August is basically Smoke Month — is hard. In a recently published excerpt from Madeline Ostrander’s new book, At Home on an Unruly Planet: Finding Refuge on a Changed Earth, the local environment reporter contemplates solastalgia: the grief that comes with seeing our homelands change around us, feeling estranged from them and losing the comfort of home. “We are moving into an era defined by homesickness” even when we stay put, Ostrander writes.

But more of us are vulnerable to heat than we may realize, and at lower temperatures than we might expect. Even one bad day of heat is enough to land some of us in an emergency room, or worse.

Allow yourself to feel vulnerable this summer. It just might make you stronger. 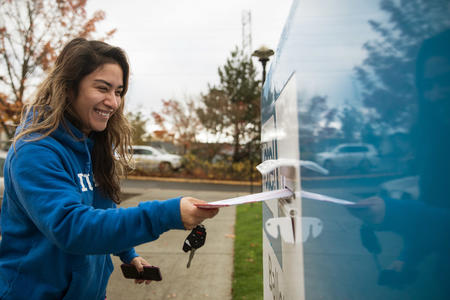