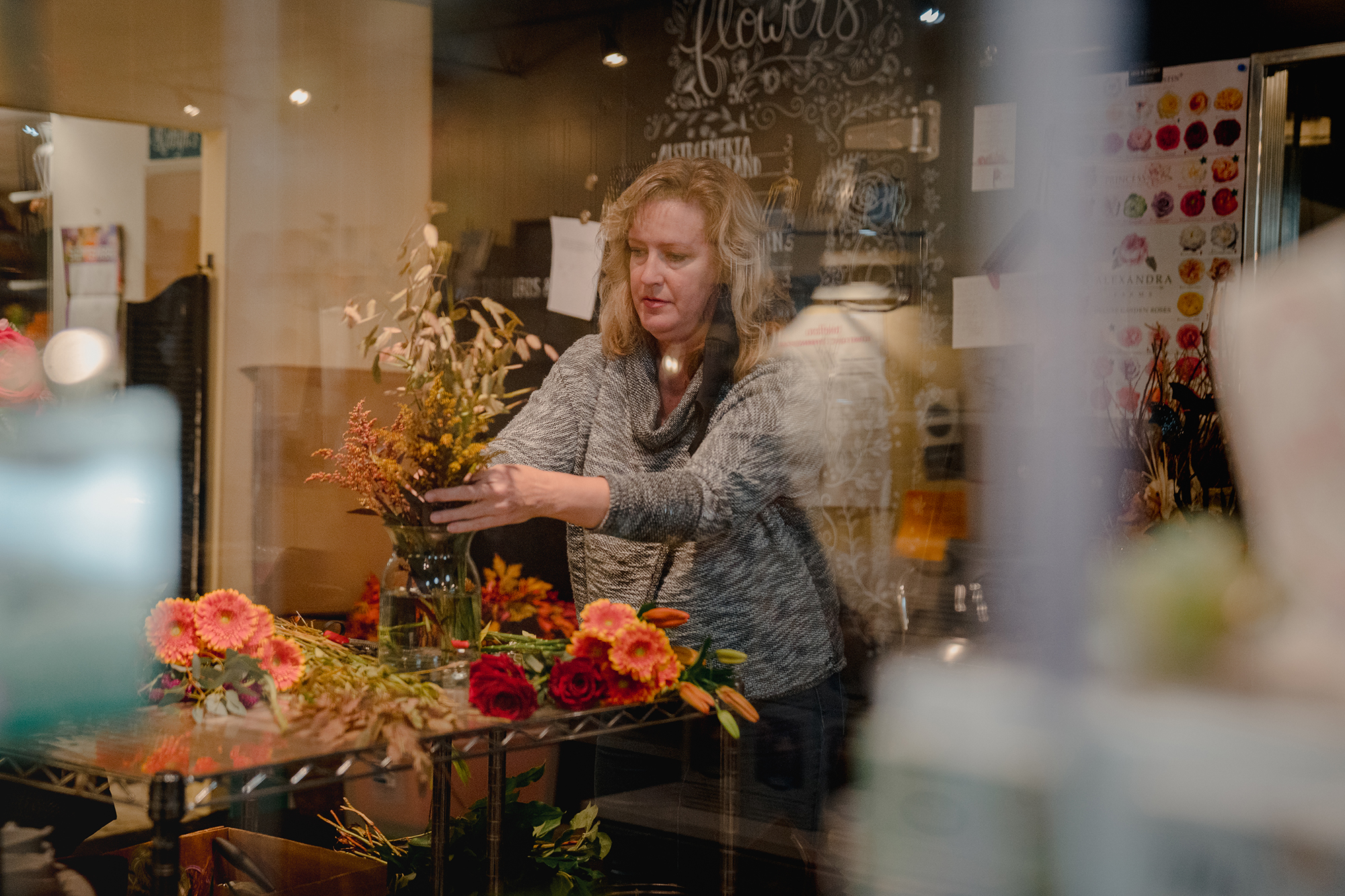 Robyn Desimone, owner of Iris and Peony, a floral business in Burien, Wash., works on a fall-themed flower arrangement on Wednesday, Sept. 23, 2020. (Jovelle Tamayo for Crosscut)

“Unprecedented” is the friendliest adjective business owners have used to describe the mad scramble they’ve been on these past six months.

Many navigated complex application processes for loans and grants. They saw a flood of support from their own communities to keep their businesses alive. Some were forced to change their mode of operation. Others had to pause, waiting for the day they could reopen.

Crosscut checked back in recently with a few business owners who have weathered the storm of change since the pandemic began. Some still worry for their futures. But for now, they’re holding on. 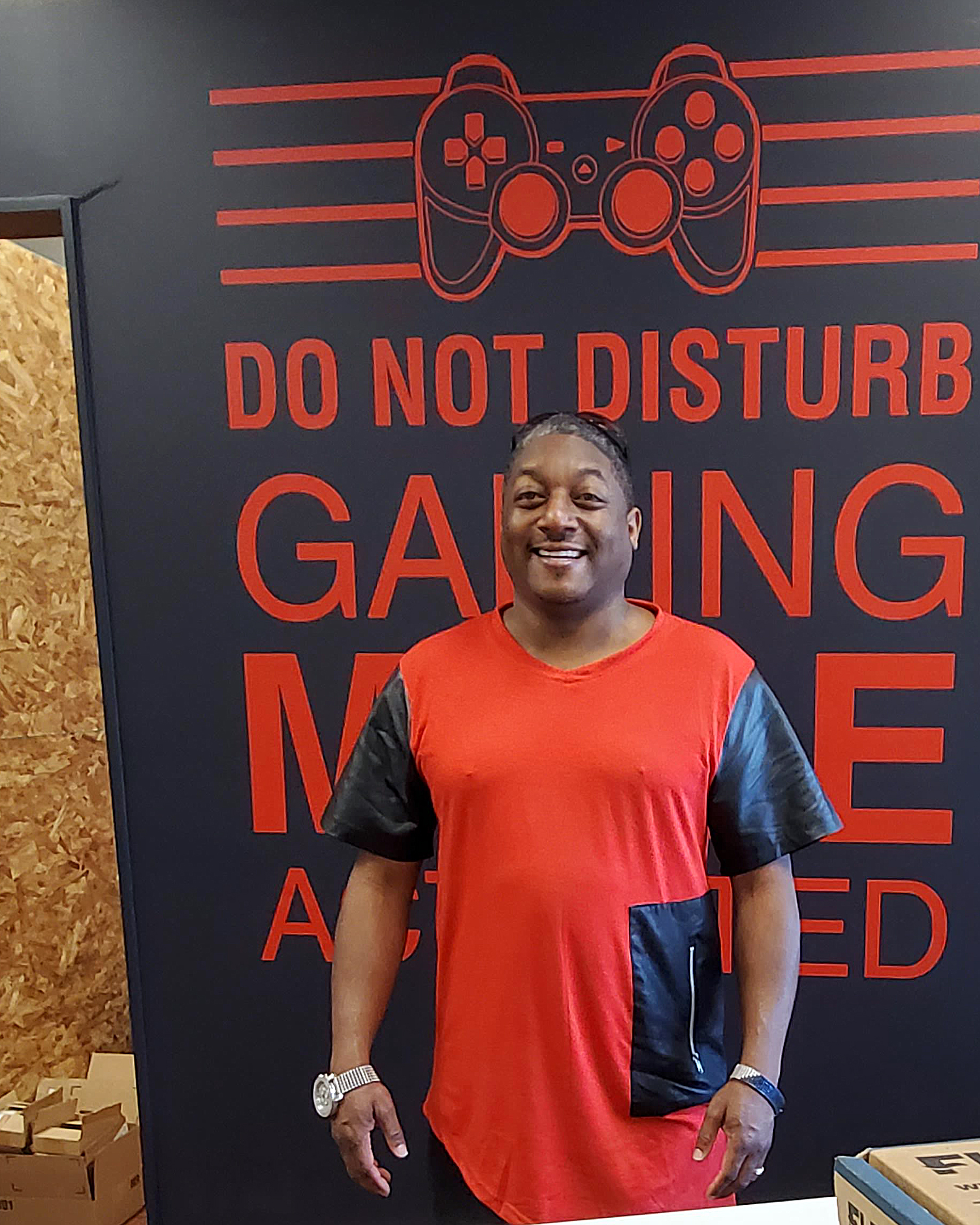 “It’s one of those situations where we couldn’t have planned for it,” he says. For now, he and other businesses are in what he calls a “holding pattern,” made worse without an end date in sight: “Who knows when Phase 4 is going to be?”

Cooper is one of those unlucky business owners who had planned to open up shop just as the coronavirus hit the state. Originally, the Tukwila company’s grand opening had been set at the end of April. He had envisioned it as a virtual reality gaming cafe, where people could rent out time to play, as well as a space where students from low-income families could use the technology for tutoring and learning.

“We’ve taken our life savings and really been engulfed in getting Legacy up and going — then COVID-19 hit and stalled everything,” he says. “Now, bills are accumulating, and there’s no revenue stream.”

Cooper is stuck paying rent for a space he can’t use. He has considered loans, as many businesses facing similar predicaments did early on in the pandemic. He and his wife got a standard personal loan, which has helped him get the business this far, but now he’s worried about repayment. Loans are generally much less appealing to him now; after all, if he’s not making any money. How can he hope to pay a debt accrued over months?

“I don’t see that as relief,” he says. “They’re not helpful in the long run. They’re just buying time.”

When it comes to other forms of relief, Cooper says businesses like his own have often been disqualified from applying for loans like the congressionally approved Paycheck Protection Program because they don’t have a couple of years of revenue to show.

It’s difficult, Cooper says, knowing what might lie ahead. He can’t see his business making it past March 2021 without revenue. In the meanwhile, he’s looked for other jobs to pay the bills. With other businesses, he has also reached out to his local congressperson, explaining his situation and advocating for direct cash payments until he and others are able to operate again. The clock is ticking, he says. He needs immediate action.

“I’m trying to do my part, as far as those things are concerned — to speak for those that aren’t being heard at this point,” he says. 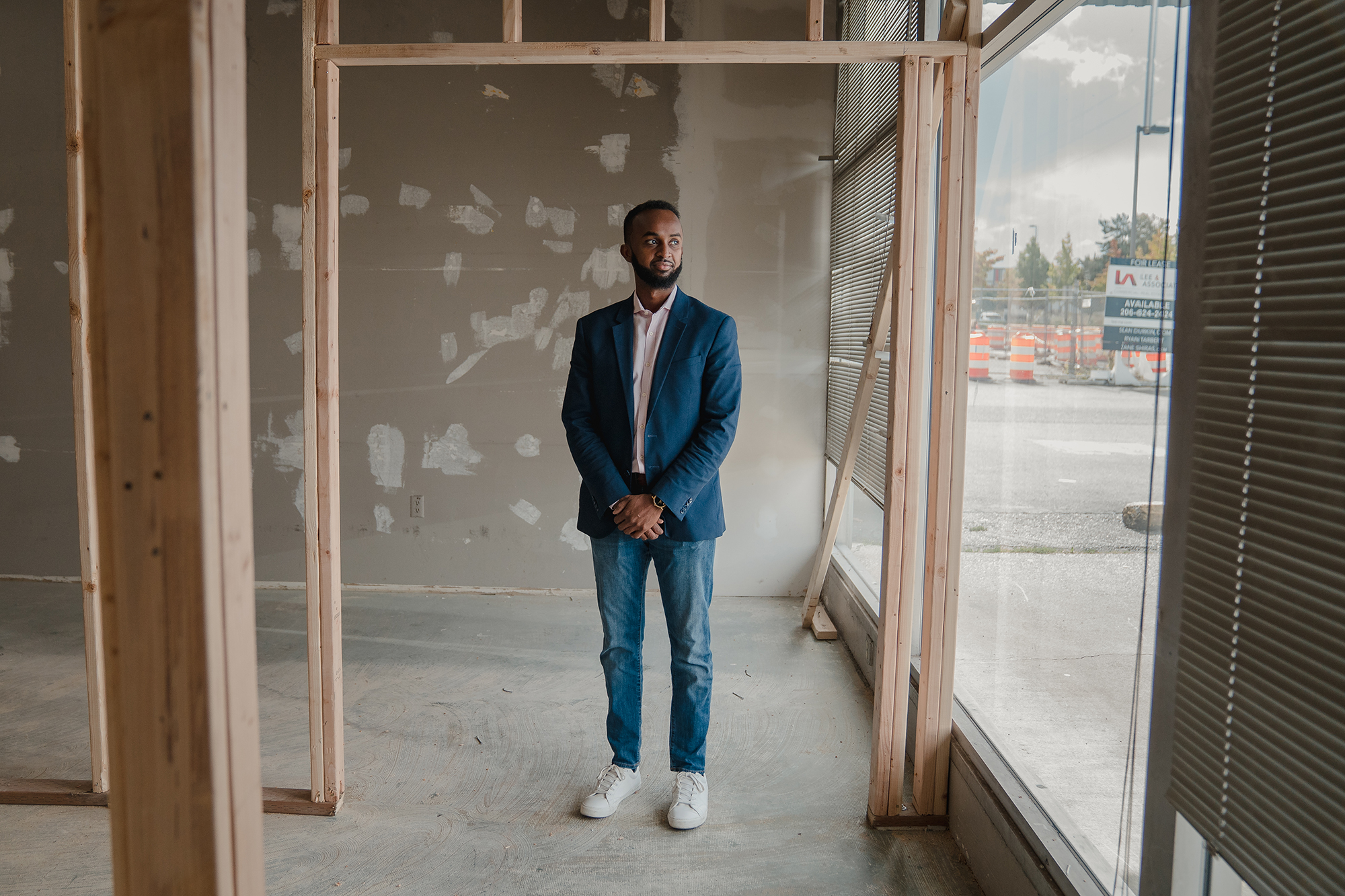 Opening in a pandemic

Last year, a largely immigrant-run marketplace in SeaTac drew attention around the state when businesses inside were given a deadline to leave. Despite the efforts of community members, the building was vacated at the end of last year, with the future of the businesses once housed inside the mall a mystery. Many shop owners put their wares in storage indefinitely, while others sought new locations.

Faisal Mohamed, along with two business partners, Abdirashid Hersi and Mahamud Duale, had embarked on a search a few months before. While Mohamed wasn’t a business owner in the now-closed marketplace, his family has lived in the area for more than a decade, and he says they had frequented marketplace for many years. The three didn’t want the market’s closure to be the end of that, so they quickly started looking for a new home for these businesses.

In March, they found what they thought would be the perfect building, just as the coronavirus hit. They had originally hoped to open up the new marketplace, now called the SeaTac Business Center, in August. The center would include 26 stalls, many run by people who had shops in the previous market.

“We’re not going to be able to house everybody that had a store in the old building, but we’re a part of the solution, I think, to that problem,” Mohamed says.

The three pushed forward and signed a lease for the space in June, but Mohamed says the pandemic has complicated their plans. They ran into delays getting construction permits from the city of SeaTac, for one. Mohamed says that resulted from the city having fewer staff members in the office because of the coronavirus. The opening date for the marketplace now looks to be about three months later than planned.

It’s a much different world in which to open than they had imagined when they initially sought out a space. To offset these setbacks, the three have started looking for grants and other forms of financial help, but even when they’re finally able to open, Mohamed wonders how the coronavirus might impact their ability to operate. It’s even harder to tell what that could look like a few months in the future.

“If our tenants can’t be in the building because of coronavirus, and they can’t make any money, then we can’t expect them to pay rent while using the space,” he says. 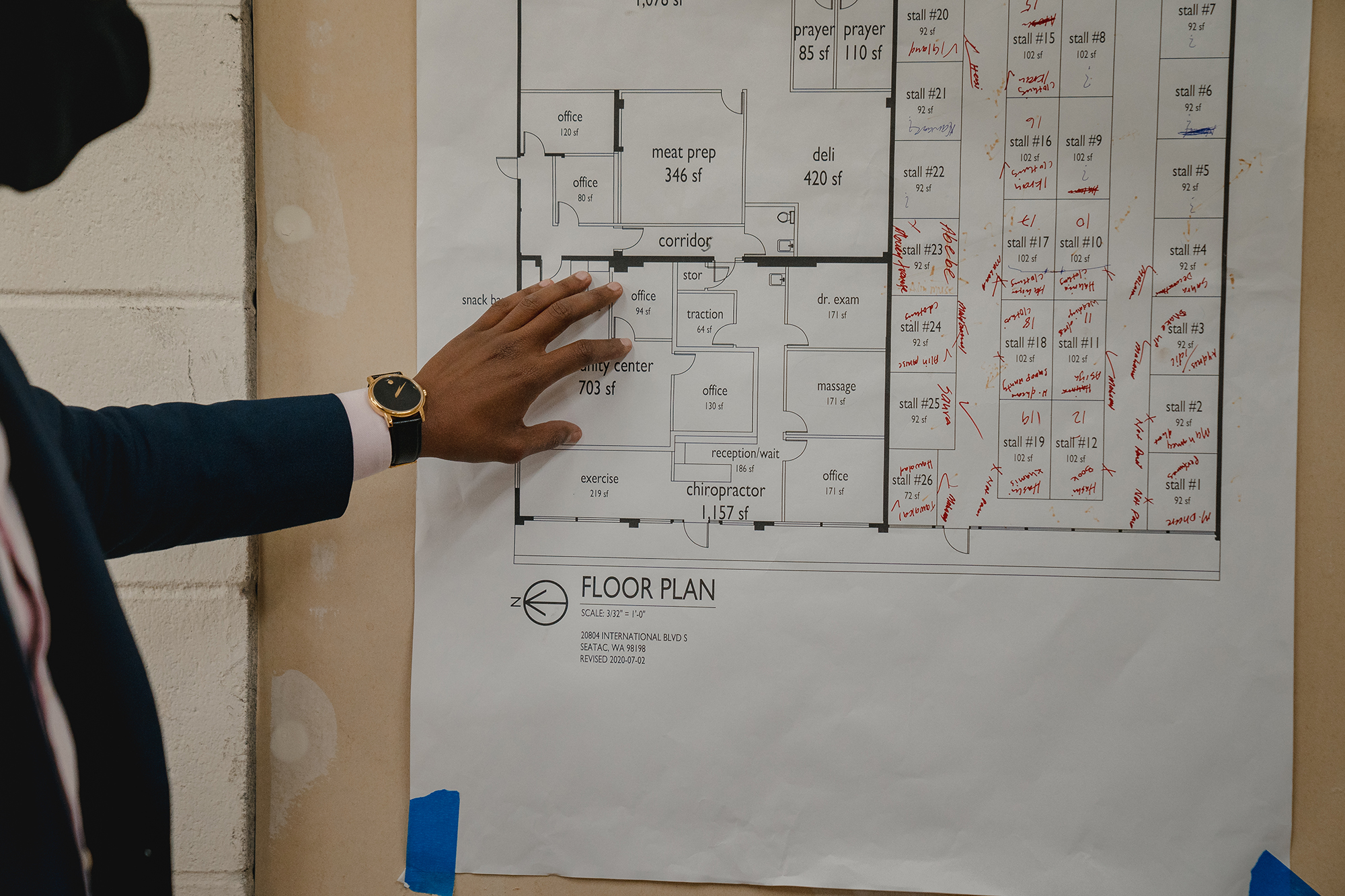 Home for the holidays

Many businesses, especially those that are tourism or event-based, make their money during the summer. This was true for Robyn Desimone’s flower and home decor shop in Burien, Iris and Peony, which usually offers flower arrangements for weddings and other events all summer.

That, of course, didn’t happen this year. Desimone says the shop quickly turned from events to retail and moved its store online. The shop’s staff was cut in half, with workers who had helped facilitate events laid off. As a result, Desimone has taken up more jobs, jobs that she hadn’t done in a while, like arranging flowers. It’s been a big shift.

“We’re operating day to day,” she says. “There’s nothing planned, no future contracts. There aren’t any kind of weddings or events on the books, at all.”

Desimone says that there has been a greater interest in sending flowers throughout the pandemic as an alternative to seeing someone in person. It was lucky for her, at least, that Gov. Jay Inslee allowed the state to reopen enough for her to do some of her business before Mother’s Day.

“Flowers are an emotional response,” she says. “The governor let us open right before Mother’s Day, and people who couldn’t go see their moms were sending flowers.”

For now, Desimone says her business is getting by, even as it’s hard to plan for what’s ahead. It’s hard for her to imagine what the holidays will look like during a pandemic — will people want to decorate for the holidays, or will that be a source of stress? Will people want to send flowers to their families if they aren’t able to see them? It’s almost impossible to predict.

“We’re hoping to stay above water,” she says. “Which is where we are now.”