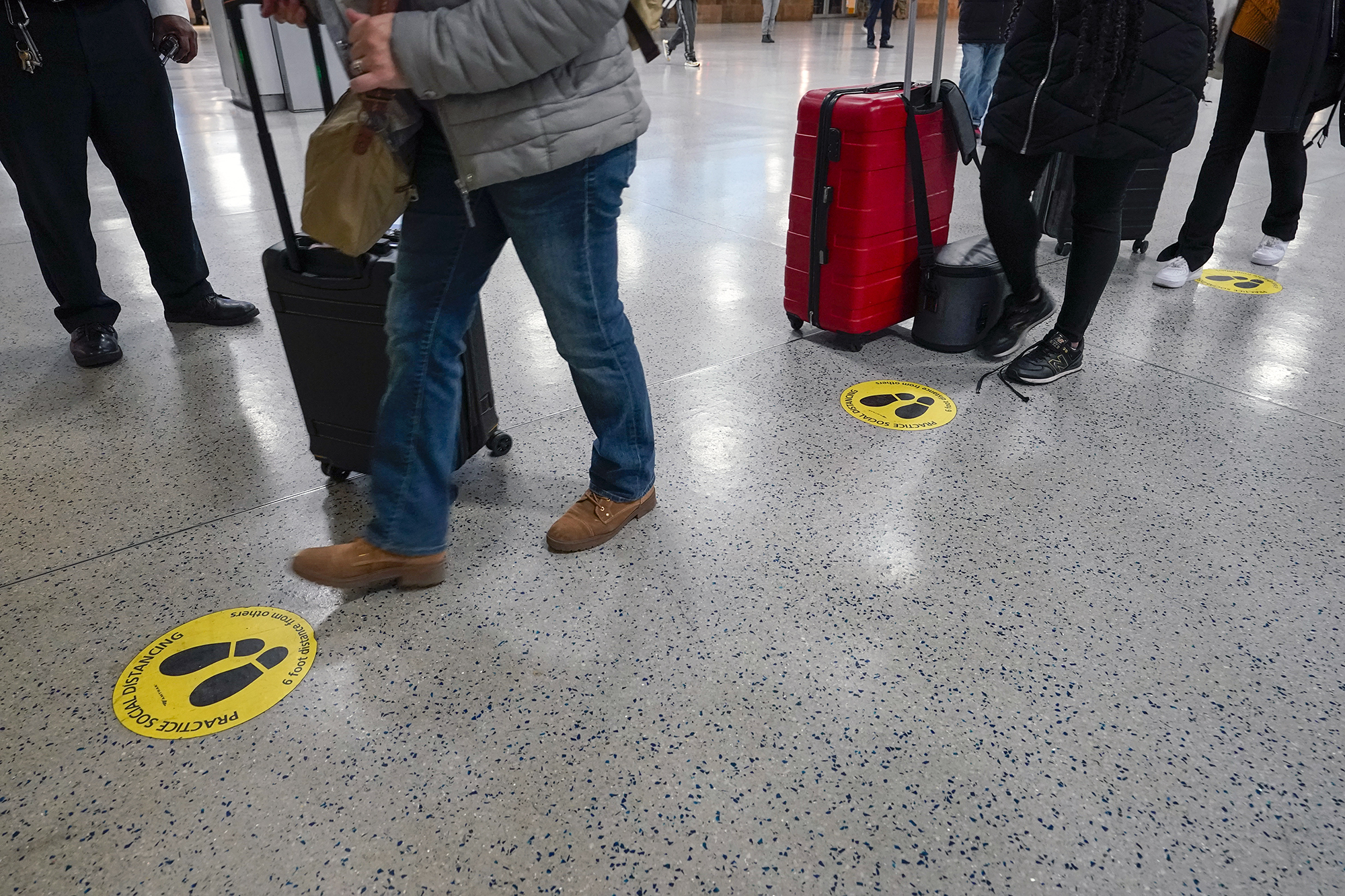 Yellow dots mark the spots for proper social distancing as travelers line up to board an Amtrak train, Nov. 24, 2020, in New York's Penn Station. Medical professionals have warned of hospitals once again becoming overwhelmed by the pandemic and urged people not to travel for the holidays. In Washington, Gov. Jay Inslee pleaded with people to avoid gatherings to help reduce COVID-19 infections and hospitalizations. (Mary Altaffer/AP)

Buckles planned to visit his son, who lives in Anacortes, for a traditional family Thanksgiving — children, grandchildren and in-laws included.

But Buckles started to have second thoughts about his trip after Washington Gov. Jay Inslee sounded the alarm about the holiday. In a televised address two weeks ago, the governor, with his wife, Trudi, sitting by his side, pleaded with Washingtonians to think better of any socializing they had planned to do during Thanksgiving.

"Tonight we have a simple request from our family to yours: Do not have Thanksgiving gatherings unless you are positive that everyone there has quarantined successfully for 14 days, which starts today," Gov. Inslee said.

"Otherwise, every social gathering is just one more brick in a wall of infection," Trudi Inslee added.

The next day, Inslee issued a travel warning. That got Buckles’ attention. The governor asked people, like Buckles, who planned to travel to Washington from elsewhere despite dire health warnings to self-quarantine for 14 days after their arrival.

From his home in the panhandle state, Buckles was watching.

“I’m a little apprehensive. I’m trying to make a decision whether or not to come,” Buckles said in an interview last week.

The dates on Buckles’ airline ticket had been set: fly to Seattle on Sunday, Nov. 22, and return on Thursday, Dec. 3 — just short of the 14-day quarantine period.

“Will I have a problem flying back to Florida?” Buckles wondered.

“If he came out and forbids travel, I’d be in a fix. And I think he’s capable of doing that,” Buckles said, referring to Inslee.

Buckles wasn’t all that worried about him or his family members getting COVID-19 as they traveled from Minnesota, Florida and around Washington state, despite all the warnings from state and federal health officials. Then what was his problem?

“What I can’t afford to do is go there and then get stuck,” he said. He didn’t want to take a chance on being late for his third open-heart surgery, scheduled for mid-December.

The 80-year-old retiree, who before becoming a tax collector served in the U.S. Navy’s medical department for 32 years, said he doesn’t fret about the pandemic as much as others might because he knows many of those infected with the virus are asymptomatic.

Buckles also said those who have died from the virus have often had other underlying medical conditions. Initially in the interview, Buckles, a supporter of President Donald Trump, didn’t acknowledge that list could include him.

Still, Buckles believes the government should trust individuals to make up their own minds in situations like this.

“Our governor has a different philosophy than your governor does,” Buckles said, comparing Florida Gov. Ron DeSantis, a Republican, with Inslee. “Our governor basically says we’re open for business; take precautions but at the same time, you have the liberty to make up your own mind.”

In September, DeSantis signed an executive order reopening the state, allowing restaurants and bars to operate at 100% capacity. Where he lives, Buckles said, about half the population wears masks in public, but “other than that you wouldn’t know anything is different.”

“I’m willing to take the chance,” Buckles said. “I’m not going to live my life in fear. I’m 80 years old. Hell, I’ve already won my race. The trick is not to get sick.”

Buckles said he isn’t cavalier about the steep uptick in coronavirus cases. He wears a mask when he goes to the grocery store and abides by social-distancing rules whenever possible. In his view, he takes a reasonable, measured approach to the pandemic.

“If someone bumps into me, I'm certainly not going to freak out,” Buckles said.

But his daughter in Florida, Buckles said, was a little more apprehensive about the trip and so in the end, the family decided against flying to Washington state.

“She’s kind of a worry wart and kinda afraid of everything anyway, so it wasn’t hard to get agreement from her,” Buckles said of canceling the trip this week. “We just didn’t want to take the chance of getting stuck there.”

And what about the son in Anacortes?

“He is disappointed, but he understands the situation,” Buckles said.

Buckles remains optimistic about both his surgery and the pandemic.

“You come out of the anesthesia, and it’s just like you got a good night’s sleep,” Buckles said of his upcoming operation.

He also assumes, given his age and condition, he’ll be one of the first in line for a COVID-19 vaccine.

With regard to Thanksgiving, Buckles still plans on eating turkey with others, including his Florida daughter, inside his home.

The Centers for Disease Control and Prevention has long warned that gathering indoors with people outside of your household substantially increases risk of infection.

In the days leading up to Thanksgiving, Florida has come close to hitting a new milestone in the pandemic: approaching 1 million COVID-19 cases. In response to the rapidly worsening outbreak, a bipartisan group of mayors from across the state has asked DeSantis to issue a mask mandate and give mayors more local control.

Asked if he was social distancing or taking any other precautions inside his house, Buckles simply said no.