A year into the pandemic, local Asian activists work to protect and help community members fearing for safety and facing economic strain. 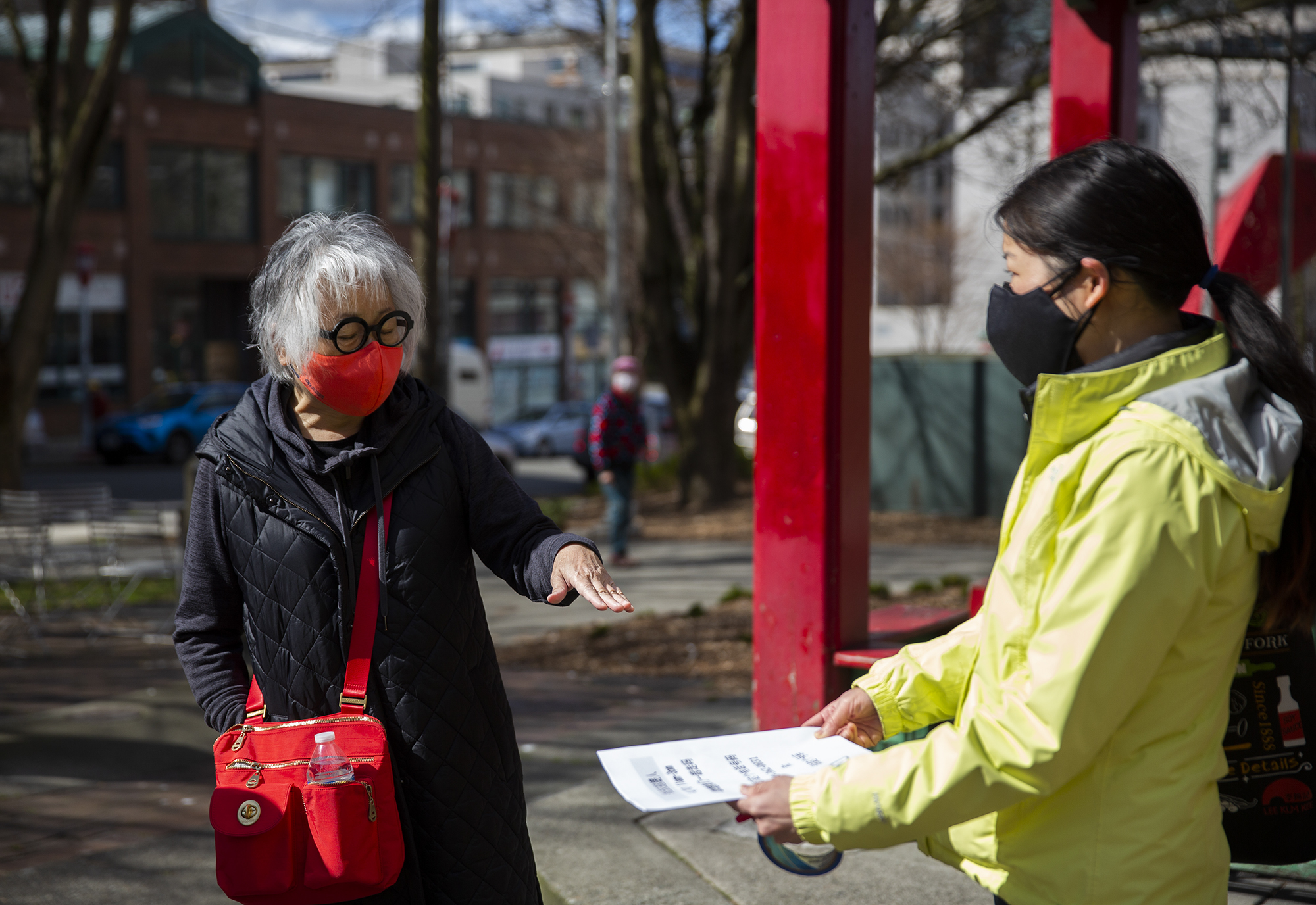 Chinatown-International District Community Watch volunteer Gei Chan, left, talks with Tanya Woo about flyers describing the group's new buddy program for seniors in the Seattle neighborhood, April 10, 2021. The group is hoping to assist community elders who may not feel safe walking alone for things like errands or exercise. (Lindsey Wasson for Crosscut)

While many Seatteites are posting vaccine selfies on social media and planning dinner parties to celebrate what appears to be a slow return to normal, one community that has been deeply impacted by the  coronavirus remains largely behind closed doors.

Henry Liu said Seattle’s Chinatown-International District is still a “ghost town.” The former program manager with a nonprofit that serves primarily Chinese elders said that even before the state mandated shutdowns, unfounded associations between the virus and China touted by leaders, including the former president, took a toll on Asian-owned businesses and made Asian Americans a target for racist violence and harassment. Fears of violence have been amplified in recent weeks by the mass shooting in Atlanta and several recent attacks in New York City.

“Before the pandemic, you couldn’t find parking at 2 a.m., but now, it’s just so quiet,” said Tanya Woo, a lead volunteer at Chinatown-International District Community Watch. “Our once vibrant neighborhood is absolutely decimated by fear of COVID and anti-Asian violence.”

Recent hate crime data released by the city of Seattle shows the fears of anti-Asian violence are based on reality. The Seattle Police Department reported 791 bias incidents in 2020, compared with 484 in 2019. While most Seattle bias incidents are anti-Black, the number of anti-Asian incidents and crimes have also increased, from 21 in 2019 to 49 in 2020.

A year into the pandemic, amid continued economic strain and the increased visibility of the ongoing anti-Asian hate and bias, Jamie Lee of the Seattle Chinatown-International District Preservation and Development Authority said “there is no end to the runway.”

“There’s so many problems being faced by the community,” Liu said. “It takes an army to address them all.” 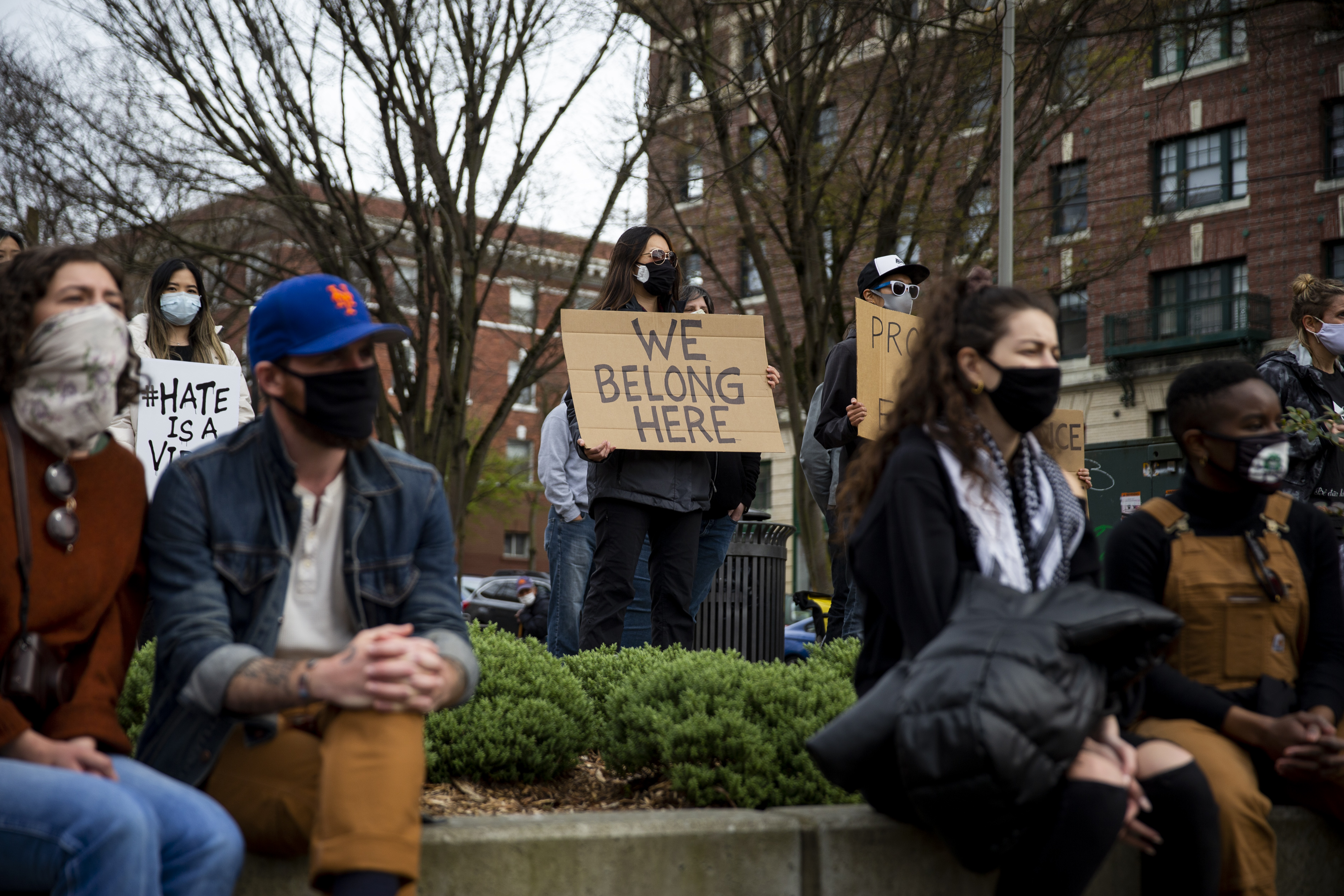 Attendees hold cardboard signs while listening to speakers at a "Stop Asian Hate" rally at Hing Hay Park in Seattle on April 3, 2021. The rally was organized by the Seattle Rice Society, a group formed in response to hate crimes against the Asian American, Native Hawaiian and Pacific Islander community. It featured personal stories, dance, spoken word and cello performances from members of the community. (Lindsey Wasson for Crosscut)

Attendees hold cardboard signs while listening to speakers at a "Stop Asian Hate" rally at Hing Hay Park in Seattle on April 3, 2021. The rally was organized by the Seattle Rice Society, a group formed in response to hate crimes against the Asian American, Native Hawaiian and Pacific Islander community. It featured personal stories, dance, spoken word and cello performances from members of the community. (Lindsey Wasson for Crosscut)

These organizations continue their attempts to keep their communities funded, fed, safe and, most recently, vaccinated. The elderly, often the target of violence caught on camera, are a priority for many of these organizations, as we enter what appears to be recovery from the pandemic.

Until January 2021, Liu made grocery deliveries to the neighborhood's senior residents. As documented in a video produced by Crosscut, Liu bought 13 bags of groceries from Uwajimaya for his first round of deliveries. He reported serving 1,000 residents near the end of his time delivering.

Liu has shifted his focus to engaging a group chat on WeChat involving about 20 elders, but grocery deliveries continue to be made in what Liu describes as a “divide-and conquer strategy” by many different organizations.

“Just having this small form of support means a lot to these families,” Liu said.” It’s more than just food, it’s emotional support.”

The Asian Counseling and Referral Service, which reaches beyond the Chinatown-International District, annually serves 35,000 individuals who speak more than 40 languages. The organization  incorporated “care-notes” in its own grocery delivery service.

Executive Director Michael Byun reported an uptick in clients seeking mental health services, particularly Asian adoptees and Asian Americans who were born in America. He credited the rise in anti-Asian hate for drawing these new clients to culturally competent care.

Treating this type of collective trauma isn’t new for the counselors, as they serve many refugees with an approach that takes into account their lived experiences.

Elderly folks seem to be better equipped to handle the distress of quarantine, Byun says.

“You would think that older adults in isolation might be at the greatest risk for mental health challenges,” Byun said. “But these older folks in our community come from experiences of trauma and war in their past where they have survived.”

Right now, Byun said, his organization sees “more complex mental health needs” and “more individuals at critical levels.” Byun reported an increase in referrals for both behavioral health  and substance use disorder services, as well as general trends of acute anxiety and depression.

He believes these mental health trends are connected to the increased fear of hate and bias. 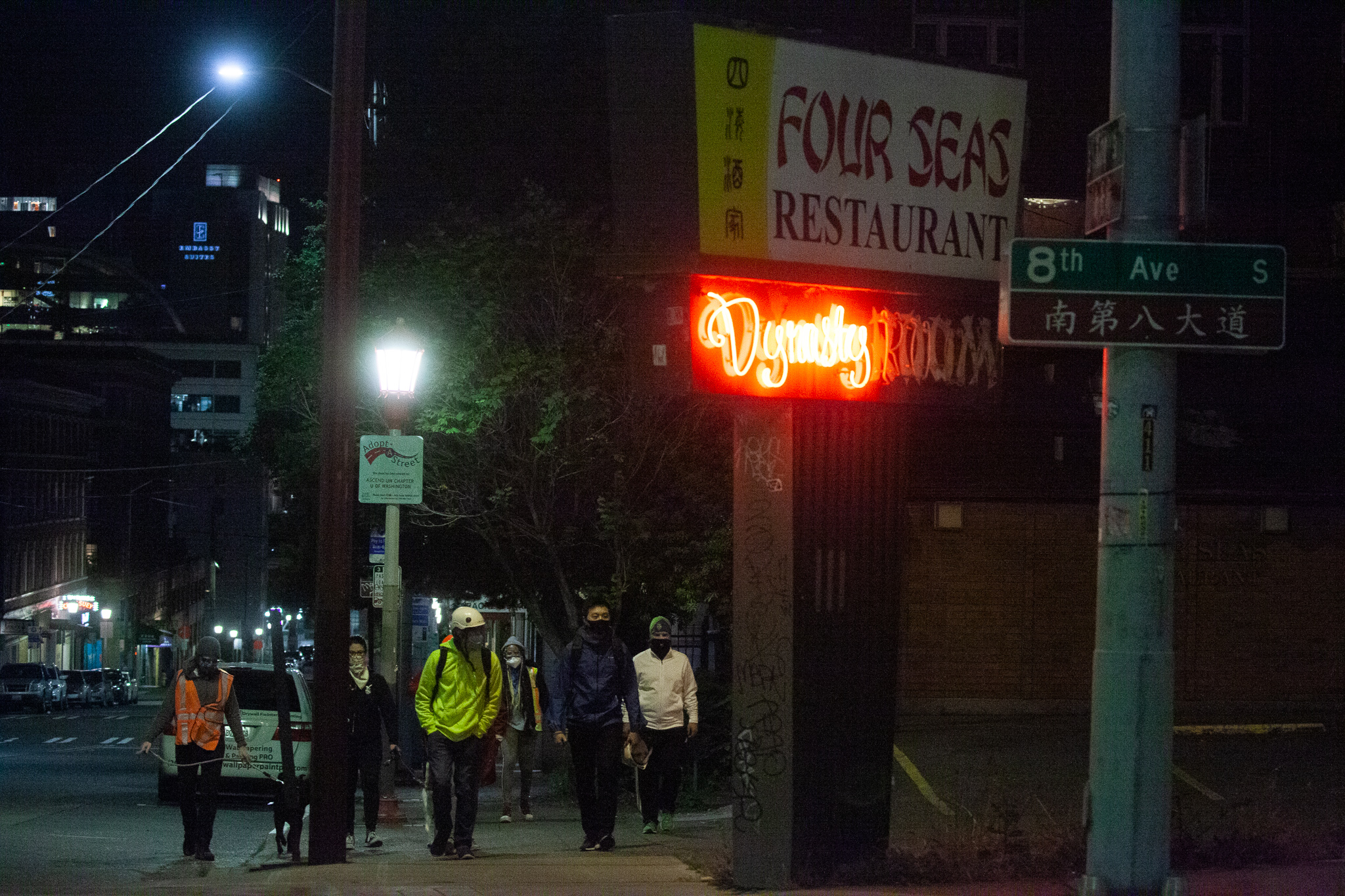 The Chinatown-International District Community Watch group walks past the building that once housed the Four Seas Restaurant in Seattle, June 3, 2020. (Matt M. McKnight/Crosscut)

The Chinatown-International District Community Watch group walks past the building that once housed the Four Seas Restaurant in Seattle, June 3, 2020. (Matt M. McKnight/Crosscut)

To address security concerns, Chinatown-International District Community Watch began patrolling the neighborhood from 9 p.m. to 11 p.m. in June 2020. In its nine months of existence, the group has never had to involve the police in de-escalation efforts, according to Woo, a volunteer who has been with the watch from the start.

In the early days of its operation, the watch attracted about 20 volunteers a night, tapering down to a solid group of 10 in later months. By November, participation had dropped so much that the group transitioned from nightly patrols to hosting watches only on Wednesdays, Fridays, and Saturdays.

With fewer volunteers and decreased activity in the winter, the group focused on putting together mutual aid kits for the neighborhood’s unhoused residents.

Woo reported a surge in volunteers following an attack in the Chinatown-International District on Feb. 25. The watch’s Facebook group went from 300 to 700 members. Now most nights the watch is back to the level of participation it saw in June.

With so many volunteers available — and the level of fear holding steady —, the watch is piloting a daytime patrol and a “senior buddy system.” The vision for this buddy system is a language accessible hotline for seniors to call if they need someone to walk with.

On Saturday, the volunteers began scouting areas where older adults might need assistance. According to Woo, who estimated that about 1,000 seniors live in the area, those residents were nowhere to be found.

“They’re vaccinated. You’d think they’d be a little more courageous in coming out,” Woo said. “But they are staying home.“

According to Lee, director of community initiatives at the preservation and development authority, during January and February, when the group served mostly people over 65, it helped about 300 people get vaccinated. With growing vaccine eligibility, it has more than doubled that figure.

“I hear [from elders] that they would enjoy going outside to the park,” Liu said of the feedback from elders in his group chat. “But they still don’t choose to do that because of the violent hate crimes they see on the news.”

The community watch believes there is “strength in numbers.” Increased foot traffic from visitors may be key in the watch’s attempts to make elders feel safe leaving their homes.

Under normal circumstances, the Seattle Chinatown-International District Preservation and Development Authority focuses on affordable housing and supporting small businesses. COVID-19 made this work even more of a priority, according to Lee.

Throughout the pandemic, the preservation and development authority has helped small businesses apply for grants, raised $1 million in relief, provided personal protective equipment and sent emails in Chinese, Vietnamese and English to keep about 300 businesses informed of changing regulations.

According to Lee, government funding to uplift small businesses has “ebbed and flowed,” with more funding toward the beginning of the health crisis. She said the neighborhood will likely need government help in recovery.

“It took a really long time for this neighborhood to come out of the 2008 recession, and I don’t feel like it fully bounced back until 2016,” Lee said. “This is way worse than the recession, so we are looking at how to bounce back again.”

Now, as the organization ramps up vaccine distribution efforts and continues to assist small businesses, the preservation and development authority is starting to think about Chinatown-International District after COVID-19, specifically after rent moratoriums end.

The statewide rent moratorium, initially issued Feb. 29 2020, has been extended several times. If the moratorium ends June 30, as currently slated, some businesses will face 15 months of rent owed to their landlords. Lee said she cannot “even understand the gravity” of the debt in this neighborhood.

As Washington begins to reopen, business is slowly returning to the Chinatown-International District.

“I’ve noticed there are folks eating in restaurants, and there's always a good takeout buzz,” Lee said. “It’s hard to find parking here again, which I think is a good sign.”

Many of the organizations providing aid to the neighborhood have existed for decades and will continue to do the work. Woo said the spirit of mutual aid is born out of necessity. But she would love for the community watch to “cease to exist'' because it is no longer needed.

“There’s too many organizations for me to name, but they all have different visions of how to help the [Chinatown-International District],” Liu said. “I think that’s what makes this neighborhood really unique.”