Climate, capitalism and the defining next decade

Economists are predicting a surge of post-pandemic growth. Should we root for the Roaring 20s? 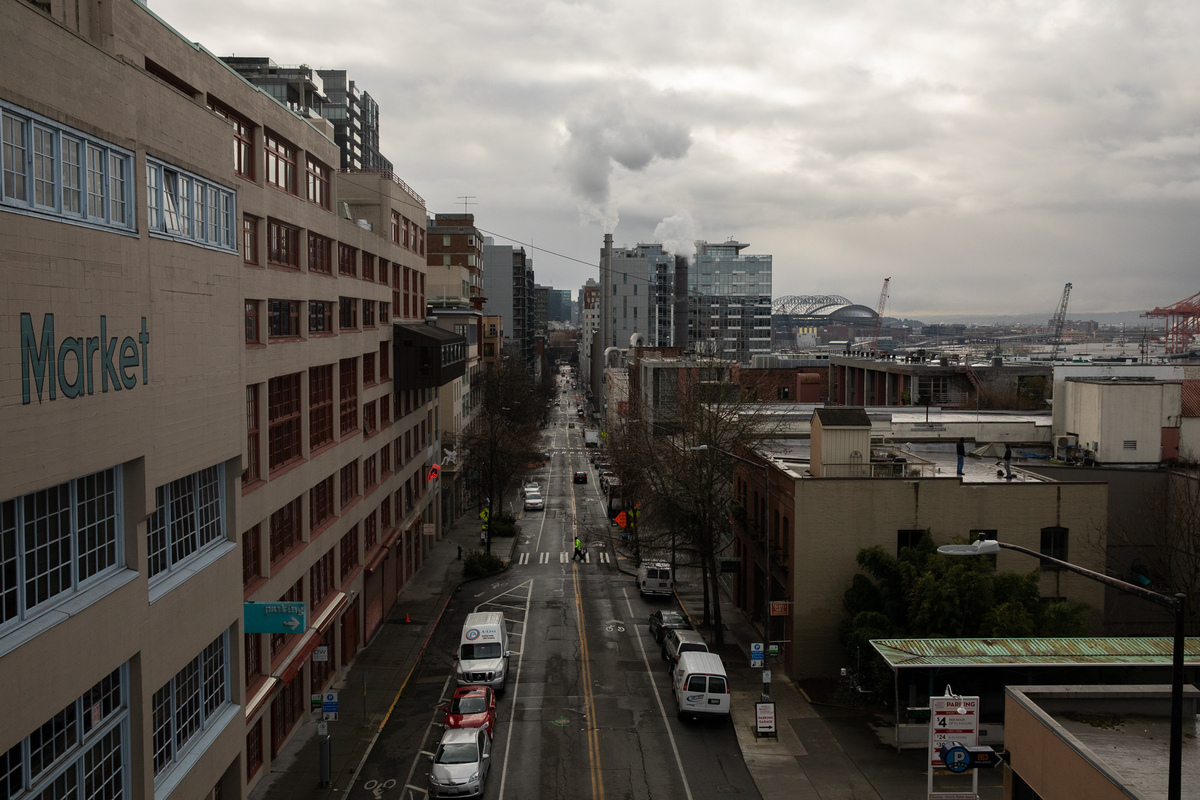 If you believe the headlines, the economy is revving up for a truly spectacular post-pandemic boom. Stimulus checks are already boosting retail sales. Jobless claims are falling. As vaccinations continue and businesses reopen, economists are feeling optimistic. China’s economy is surging, too.

One year ago, many commentators (myself included) speculated that the COVID-19 recession could be the start of a deep and prolonged global downturn. Comparisons to the Great Depression of the 1930s abounded. Looking back at those dire predictions from the vantage point of today’s rosy forecast, we should rejoice.

When I imagine the humans of the next millennium looking back at our age, or perhaps an alien visitor surveying its wreckage, and consider how they might sum it all up, what comes to mind is a single chart.

It depicts the total output of the world economy: a long flat tail that lifts off early in the 19th century, gently at first, then veering upward, tracing an exponential curve. By our own time this line appears almost vertical, suggesting an approaching asymptote, some kind of apocalyptic singularity or heavenly ascent that could just as well end at the bottom of the Icarian Sea. 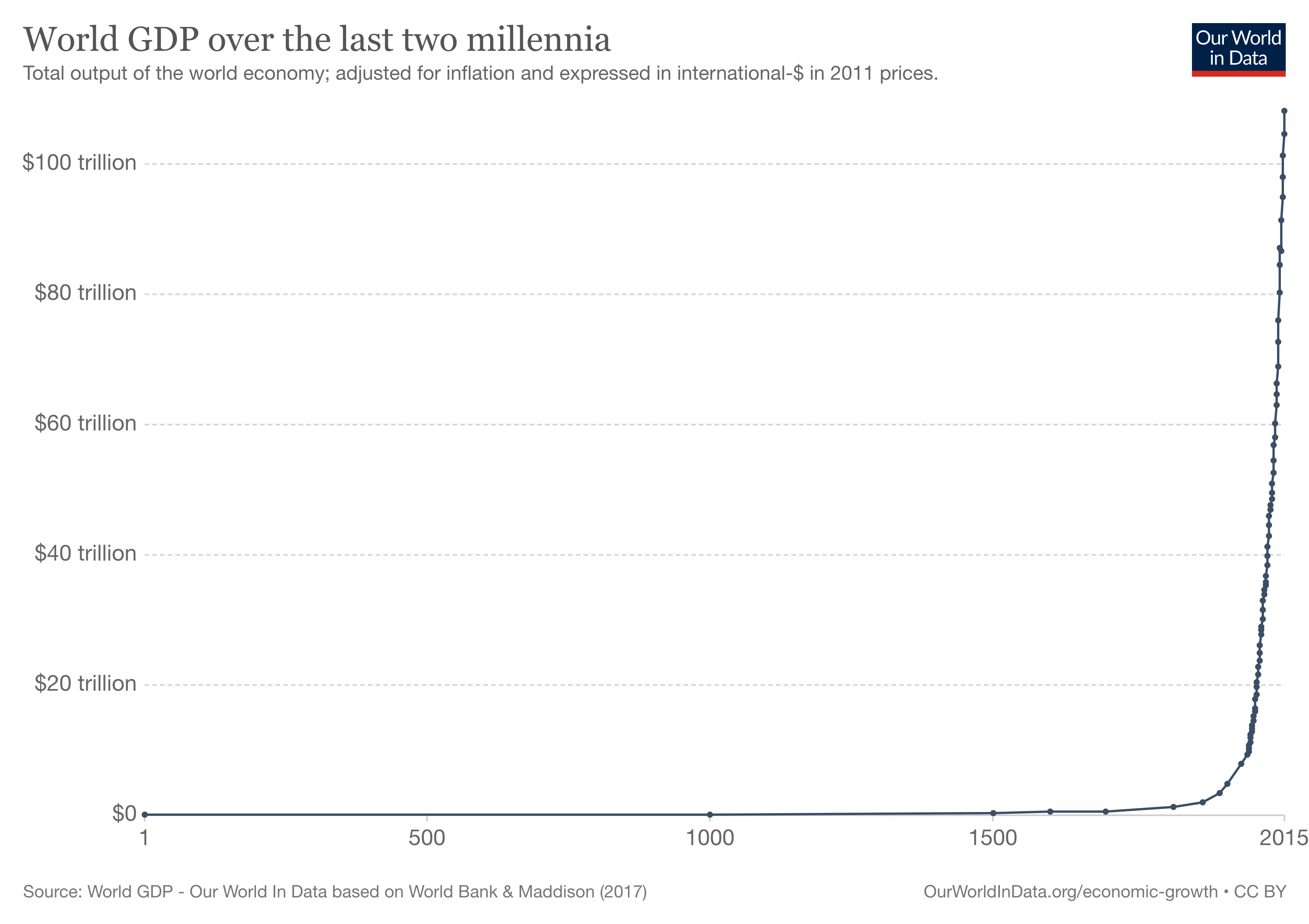 (Our World in Data)

(Our World in Data)

That exponential curve has been powered overwhelmingly by fossil fuels. The climate crisis is often viewed as a political challenge: a problem of cajoling the world’s nations to agree to climate goals, or of dislodging the entrenched lobbying power of the fossil fuel corporations. But it’s also, more fundamentally, a question of what to do about that curve.

The COVID-19 pandemic caused a rare downward notch in this chart, a 3.5% contraction of global growth in 2020. The last time that happened, and the first recorded instance of a negative growth rate, was in 2009, when the Great Recession shrank the global gross domestic product by a smidge over 2%.

These two world-shaking recessions, for all their human misery, dialed down the deadly CO2 spigot. But only slightly. Global emissions declined by 1.3% in 2009. Last year, with air travel, road transportation and other sectors of the economy artificially suppressed, emissions fell by about 6%. Even that reprieve was fleeting. By December 2020, global emissions had rebounded, clocking in at 2% higher than in the same month of 2019.

Now, policymakers and the business class are eagerly anticipating the post-pandemic boom. Pent-up demand will explode, as consumers spend their savings and their stimmies, plan lavish weddings and set off on globe-trotting vacations.

Some observers are predicting more than mere recovery to a pre-pandemic normal. Despite the skyward trajectory of global output, the actual pace of growth has been slowing for some time, with mature economies like the U.S. leading the decline despite foot-on-the-gas monetary policy. Maybe this is the moment the stars align to produce a new era of rapid growth, innovation and productivity: the Roaring Twenties.

But a decade of red hot growth could hurtle us toward a red hot climate. If we take to heart the repeated warnings from the United Nations and climate scientists worldwide, these next 10 years matter — a lot. Yes, wind and solar energy are increasingly outcompeting fossil fuels, a trend the pandemic has accelerated. Mass adoption of electric vehicles may be just around the corner. And the Biden administration is making big climate promises and challenging other nations to follow suit. But despite all that, if the engines of economic growth start firing on all cylinders, it’s hard to imagine that greenhouse gas emissions will not continue to tick upward for years to come.

So, is there something else we can root for?

How about the Torpid Twenties? Some predict the post-pandemic boom will be more of a bump, quickly falling back into the rut of “secular stagnation.” In this case, propping up a sluggish economy will require action: continued public stimulus and investment, initiatives to spur private investment in the real economy, redistribution to shift wealth to people who will spend rather than save. Maybe robust, sustained growth will become possible once again — but only insofar as free market orthodoxy falls away and governments assume a newly interventionist role in creating, shaping and regulating markets.

That sounds like a better scenario for the climate. The more government activism is recognized as indispensable, by voters and by the private sector, the more it will become politically feasible to enact transformative, Green New Deal-style reforms in the U.S. and around the world.

But this progressive vision raises a question, perhaps the ultimate question about that growth curve we’re still blasting up along: Can we jettison our fossil fuel engine, strap on renewable energy battery packs and continue the upward ascent?

Or is it natural and inevitable that the curve will level off?

There are good reasons to think it must. Economic growth has two parts: rising output per person, and a rising population. Can individual consumption of goods and services really go on increasing forever, generation upon generation? It seems unlikely, not to mention undesirable. Population growth, too, is grinding to a halt in most mature capitalist economies — a fortunate fact for our finite planet. Unless you subscribe to the Jeff Bezos plan for space colonization, it’s hard to believe we’re not in for some kind of bumpy landing.

But what does that mean for the economy? Capitalist markets thrive on expansion: producing and selling more for less, stimulating consumption, turning money into more money. What if achieving sustainability without stagnation entails a more thorough restructuring of economy and society, a transition that elites who benefit from the status quo and can’t imagine a world beyond it will strenuously oppose?

This view suggests a third scenario: the Tumultuous Twenties. A decade of economic depression and upheaval would come with a steep human cost. But it would also ease carbon emissions and — just maybe — spur the rise of movements that can build political will for more fundamental change. Think 1930s instead of 1920s, but with even more far-reaching results.

Roaring, torpid, tumultuous — maybe it’s impossible to root wholeheartedly for any of these decades. So which will it be? We don’t know, and yet it matters profoundly. We understand our economic system, or at least agree on that understanding, far less than we do the climate system it is irreversibly disrupting. There may be no better argument for radical change. Let’s just hope we can get off this curve alive.