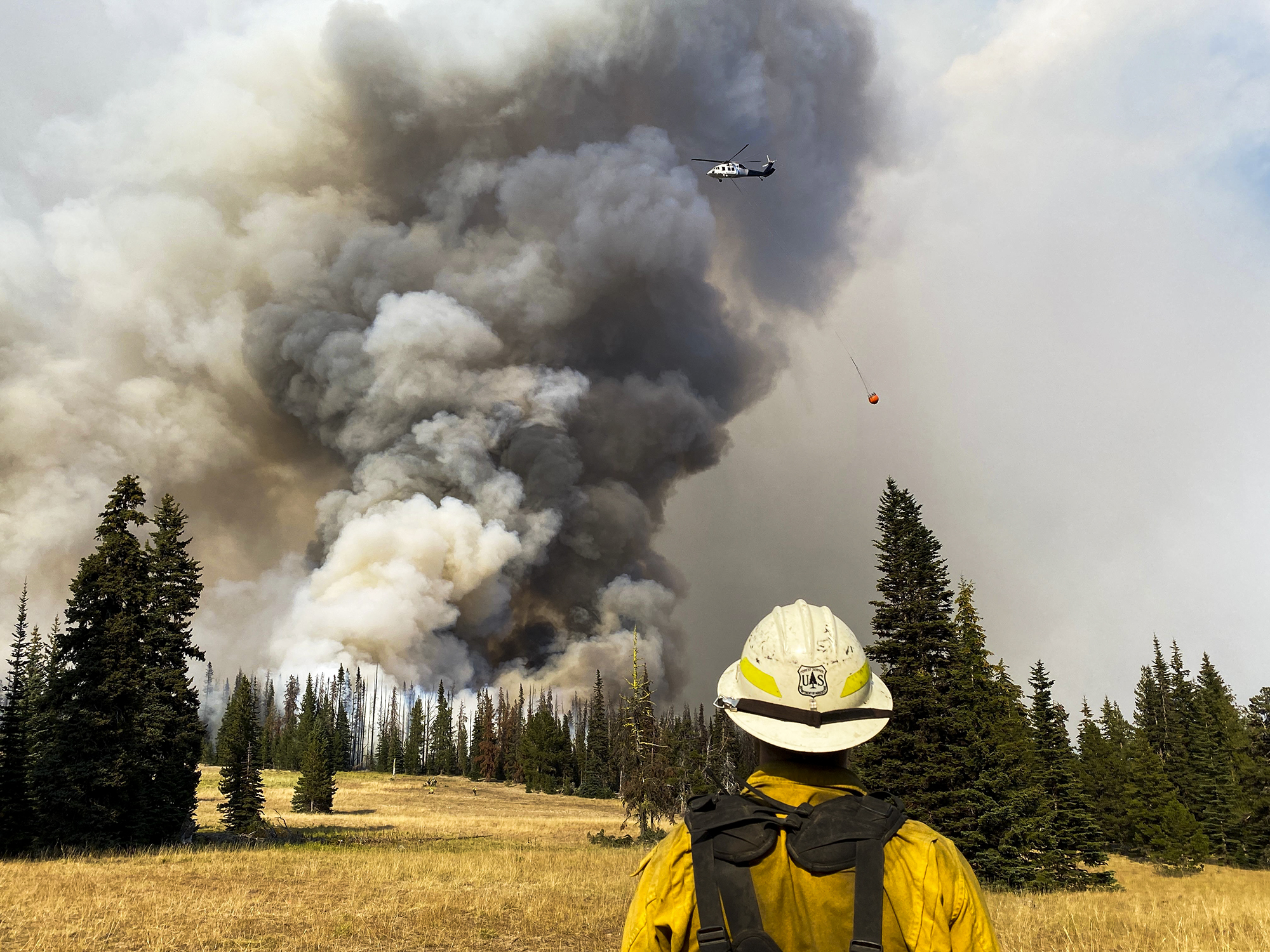 A helicopter with a bucket flies over an active fire area a part of the Schneider Springs fire as a firefighter watches on Aug. 30, 2021. This helicopter and others were dropping water on the south side of Forest Road 199 to raise humidity in the area and reduce spotting potential. (Schneider Springs Fire Public Information)

Sometime in the early 1960s, when I was 9 or 10 years old, we were visiting relatives on Shaw Island, a gem smack in the middle of the San Juan archipelago. Our first morning there we were awakened by word of fire; lightning had struck, and some part of the tinder-dry emerald paradise was ablaze. We jumped in the bed of a neighbor’s pickup and sped down bumpy dirt roads to meet up with the single truck from the island’s volunteer fire department.

The fire crackled on an offshore islet connected to Shaw only at low tide. We waded out in our clothes and shoes, carrying shovels, picks and buckets, and began digging to get at the burning roots of the struck tree. We formed a bucket-brigade and doused the flames and embers with Salish Sea water, as smoke filtered up through the dry moss. For me, it was an unexpected adventure and, thankfully, a rare event in the rain-shadowed islands dry enough even for tiny cacti.

This story came to mind this summer, as wildfires burned throughout Cascadia. Another hot, drought-beset spring and summer with a record-setting “heat” wave — one of the worst natural disasters in Northwest history, with a death toll in the hundreds and a town in British Columbia, Lytton, burned to the ground. Mount Rainier had its flanks bared in July, as ice and snow melted fast and early.

Read more: Bill Bryant on the case for long-term protection of Washington's forests.

Wildfire has become a great presence again in the region, heralding a new normal. Bigger, more threatening fires are happening and predicted to continue.

This fire season, I heard from friends and family whose homes and cabins were in jeopardy. One friend posted regular updates on Facebook, as a blaze worked its way on a ridge above his home in the Methow Valley. Family members who use a beloved old cabin in Goose Prairie, just east of Mount Rainier, monitored the seemingly inexorable Schneider Springs fire, which has burned over 107,000 acres of wilderness and was only 55% contained by the beginning of October. Access to the cabin was cut off, and the single road to the prairie became a fire line to save the small, unincorporated community there. For many this summer, the outdoor adventure of choice was nervously watching fire reports.

In the 19th century, fires were common in the Northwest, caused by lightning — like the two mentioned above — or coal-burning steam engines and campfires. There was no real fire-fighting capacity, and fires tended to burn until the fall rains put them out. Mark Twain’s only visit to Puget Sound, in 1895, was marred by fire smoke so thick he never saw the scenery.

Only with the so-called Big Burn of 1910 — what Seattle author Tim Egan called an “apocalyptic conflagration” that vaporized 3 million acres of Montana, Idaho and Washington in 36 hours — did the scale of a fire demand attention and resistance, as well as a more proactive effort to protect harvestable timber, and therefore dollars, from going up in smoke. The U.S. Forest Service was put to the task of preserving our natural resources, its leaders' attitudes toward fire deeply influenced by the Big Burn, which killed at least 85 people.

Fire was present in the West, but megafires were uncommon.

In the fall issue of the Oregon Historical Quarterly, historian and professor emeritus at Oregon State University, William G. Robbins — a wildfire fighter himself in the ’60s — gives an overview of fire history. In his article, “Oregon and Climate Change: The Age of Megafires in the American West,” he cites some of the famous fires, including the sequence of so-called Tillamook burns in Oregon’s usually damp coastal range in the 1930s. Big fires west of the Cascades are relatively rare, often fanned by dry, downslope east winds. But in 2020 alone Robbins documented five west side fires in Oregon that burned over 840,000 acres — greater than many years’ annual totals for the state. In the 10 years from 2012 through 2021, more than 7 million acres have burned in Oregon.

Wildfire experts attribute increased fire risk in the Western U.S. to warm and dry conditions, drought, insect outbreaks and unusual or anomalous weather conditions. The Northwest’s July heat dome event was “virtually impossible without climate change,” according to researchers with the World Weather Attribution group. The problems are exacerbated by past fire suppression tactics that have increased forest fuel, and dangers have increased as more people settled in wildfire zones. Most fires are human-caused.

In the big picture, Robbins writes, fires in the past couple of years “provide new and alarming data” about our future due to climate change. Historian Stephen Pyne has argued in Crosscut that we have lost control over “good fire” and “bad fire” and risk falling into a new age he called the Pyrocene. “We forgot how good fire made us and how bad fire can unmake us,” he writes.

Our bad-fire summers have once again brought us a smoke season — despite our more sophisticated approaches to putting out fires and marshaling thousands of firefighters. Smoky days are now a new summer normal not experienced since the 19th or early 20th centuries. According to a study by National Public Radio and Stanford University researchers, King and Pierce counties now experience about 30 smoke days per year.

John Ryan, a reporter at Seattle’s KUOW, says eight Eastern Washington counties average at least 50 days of smoky skies. In 2020, particulate matter in Northwest air reached a 21st century high, according to the Environmental Protection Agency. Ryan reports that researchers at the University of Washington estimate that “just 13 days of smoky particulate air in 2020 killed 38 to 92 people in Washington state.”

Smoke and gunk in the air, and July’s heat wave, have prompted more Northwesterners to install air conditioning and buy air filters to make life breathable, more comfortable. The heat’s victims tend to be the poor and elderly, who don’t own those resources for protection.

The death toll during summer’s July heat wave was stunning. In British Columbia, which set a record temperature for all of Canada at 121 degrees Fahrenheit, 570 sudden deaths were considered heat related, according to the province's chief coroner. That accounted for 70% of all deaths at that time — and 79% of those who perished were people over age 65. Hundreds more died in Washington and Oregon. Yes, it was abnormal. But, according to the EPA, in the last decade heat waves nationally have dramatically increased in frequency, duration, length of season and intensity. We are warned to prepare for more. How abnormal extreme events will be remains to be seen.

The most visible barometer for climate change to those of us here on Puget Sound is Mount Rainier/Tahoma itself. The glaciers on its flanks are in retreat and have been for the past century. In his recent book, Tahoma and Its People: A Natural History of Mount Rainier National Park, author Jeff Antonelis-Lapp reports that a survey of records over the past 100 years concluded that the surface area of glaciers and perennial ice on the mountain have shrunk by nearly 40% between 1895 and 2015. Quoted in the book is Paul Kennard, regional geomorphologist with the National Park Service, who says, “Based on the most up-to-date mapping, all of Mount Rainier’s glaciers are at their historic minimums…. We have lost eight glaciers in my lifetime.”

KUOW’s Ryan reports that airplanes and drones are being used to get an updated picture of the mountain’s glaciers. “They’re not healthy, if you want to think of it that way,” Park geologist Scott Beason told Ryan about the shrinking glaciers. That affects entire ecosystems, including the many rivers these glaciers feed and the flora and fauna of the region. Kennard says, “Climate change is the elephant in the living room.” It used to be a white-cloaked elephant, but the brown flanks we saw this summer could be a sign of more denuding to come.

We are used to thinking of the Northwest as a temperate haven, a place of refuge, somewhat insulated from the ravages of climate change elsewhere. We still have water and ice, lush forests and natural beauty. But this year it’s clear that the challenges of keeping it that way are many. To overcome them will take a kind of collective commitment that we are not used to making these days. Even if we engage fully, fire, heat, bad air and their consequences are going to be setting new thresholds and difficulties in the years ahead. We are not immune. And those of us who once cherished “the good rain” cannot take it for granted any longer.