Voters supportive of the Black Lives Matter movement say protesters aren't to blame for any violence during demonstrations. 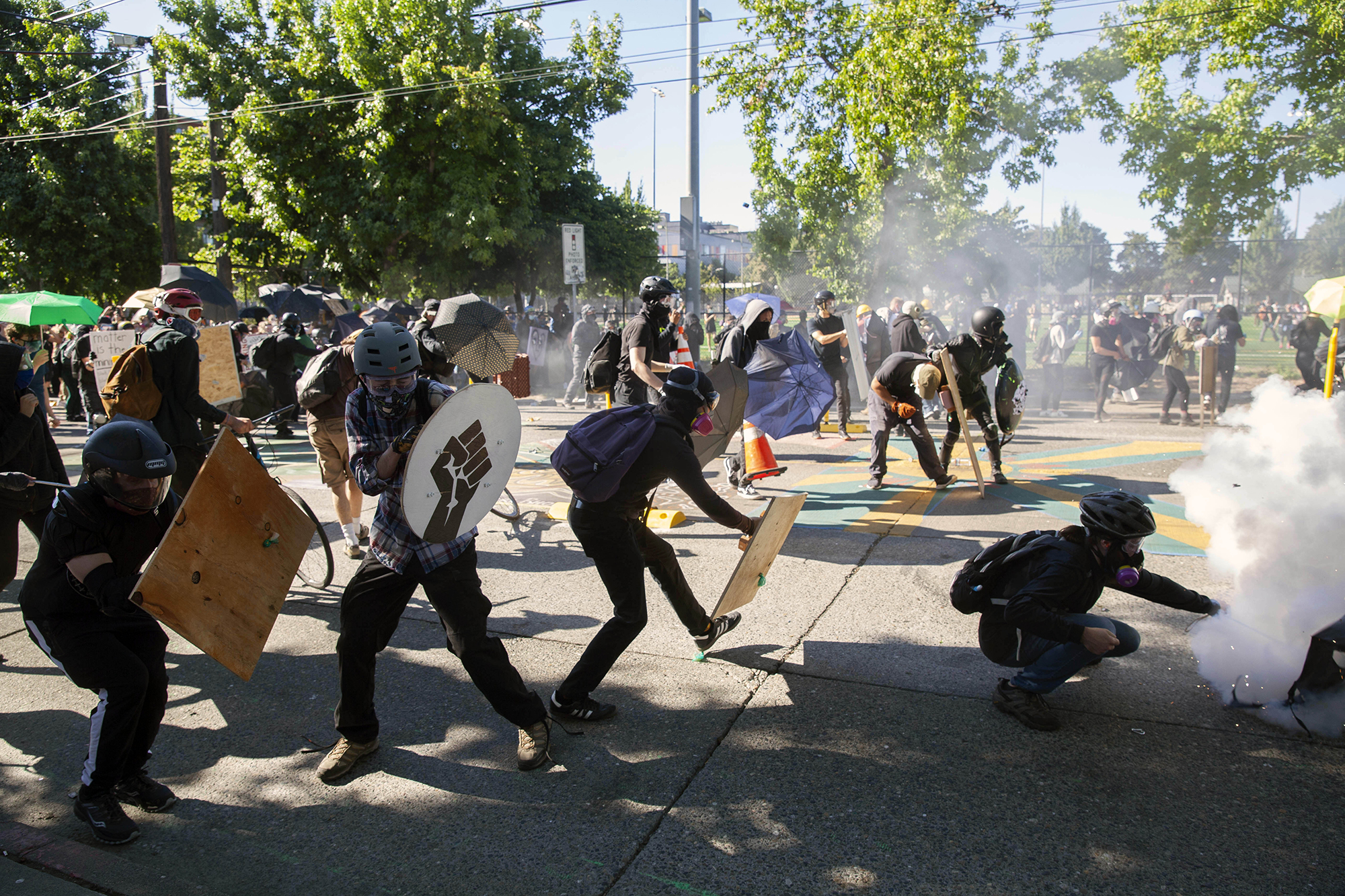 A vast majority of people living in Seattle and King County support the Black Lives Matter protests and believe outsiders not committed to the movement are to blame for any violence that has occurred at demonstrations, according to a new Crosscut/Elway Poll.

Those living in the greater King County region but outside of Seattle also overwhelmingly favor the protests, with 43% saying they support and 24% saying they mostly support the demonstrations, which center on the killing of African Americans by police.

The Crosscut/Elway Poll surveyed 400 registered voters and has a sampling error of plus or minus 7% at a 95% level of confidence, which means that if the survey had been conducted 100 times, the results would be within 7 percentage points of the results reported here at least 95 times.

Protesters calling for an end to racial injustice have sometimes raised eyebrows in Seattle — breaking windows, or contributing to other property damage, often at police stations or stores owned by large corporations.

Over the summer, protesters temporarily established CHOP, or Capitol Hill Organized Protest, a 24/7 demonstration zone around Cal Anderson Park and the Seattle Police Department’s East Precinct. Although the protests were mostly peaceful, a series of shootings occurred near the area, and two teens were killed. CHOP became a favorite target of President Donald Trump. The U.S. Department of Justice recently labeled Seattle an anarchist jurisdiction, noting that local leaders had allowed “anarchists and rioters” to take over six blocks of the city.

Since the CHOP was cleared out, demonstrations have continued in various forms, including nightly marches to elected officials’ homes, which some Seattle City Council members have welcomed. One of the protesters’ main demands — defunding the Seattle Police Department by 50% or more — has seen modest gains, with the council agreeing to cut 100 full-time positions from the police department and the police-led Navigation Team, which handles homeless encampment sweeps.

Still, a majority of people living in the region not only support the ongoing protests, but seem to also believe police departments need to be changed. For example, a majority of people living in Seattle — 54% — agree that the deaths of Floyd, Breonna Taylor and other African Americans at the hands of officers are a result of systemic racism within police departments and not just because of a few bad officers.

In King County, outside Seattle, the belief that systemic racism is to blame for police violence against Black people drops to 41%. In King County, a larger percentage — 39% vs. 30% in Seattle — say shooting or using excessive force against unarmed Black people is the result of just a few bad officers.

A majority in both Seattle and King County — 66% and 51%, respectively — do not support the addition of federal agents to buttress the police department’s efforts. In addition, a good number of people in Seattle (67%) and in King County (49%) believe the protests have been mostly peaceful. When violence has occurred, Black Lives Matter protesters aren’t to blame but other people or groups are, according to 67% and 74% of those polled in Seattle and King County. 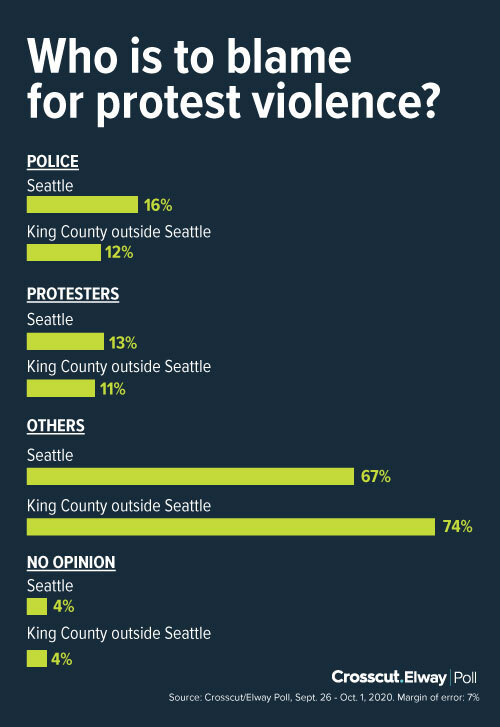 Grace Hedgecoke, a white 57-year-old retiree living in Burien who participated in the poll, said she believes outsiders are to blame for any trouble at protests, but she couldn’t say exactly who these outsiders are. Some could live in Seattle, she said, but images she’s seen in the news have convinced her that “there are people out here who have no intention of supporting the [Black Lives Matter] cause. The cause is a cover to break into businesses.”

Hedgecoke thinks the protests have continued months after the killing of Floyd because it provides those seeking change an outlet.

“There’s a lot of stress anyway. People don’t have anywhere to go with that stress. This is something they can do,” Hedgecoke said, referring to both the protests and the coronavirus pandemic.

“Clearly something needs to change. I think the whole thing needs to be reenvisioned,” she added, referring to police departments.

Hedgecoke also said that although she had been impressed with the way police have handled protests in the past, what she’s witnessed in Seattle has been different this time. “The police seem to be taking it more personally,” she said.

Rosalind Brazel, a 48-year-old Black Seattleite who works for the city, agrees those who aren’t necessarily committed to the Black Lives Matter movement are mostly to blame for the violence at the protests.

Brazel said she doesn’t think police have been perfect with regard to handling the protests, but she said she would give them a B- or C+ overall. They “did a good job of first trying to de-escalate before engaging with protesters,” she said.

She added that she thinks the protests have already had a positive impact, with support for Black lives and Black-owned businesses coming from everyday people to professional sports teams, such as the National Basketball Association.

A white Trump supporter from Lake Forest Park who participated in the poll, but who asked to remain anonymous for this story, disagrees that the protests are about Black lives.

“All this BS that’s going on in Portland? That’s crazy,” he said. “There are people who are dying every day. I don’t think people are protesting because of George Floyd.”

“All I know is there are people who are seeing it as free-for-all,” he said, noting that he believed police had been too lax in their handling of protesters. He said everyone has the right to protest but added: “Everybody has the right to defend their property.”

Daniel Fletcher, a 34-year-old tax accountant in Seattle who is white, blames counterprotesters who are against Black Lives Matter for any escalation in violence. He also said police had been unnecessarily aggressive against protesters.

“I don’t entirely understand their strategy,” Fletcher said of police, who he said had been inconsistent in their handling of demonstrations.