How Washington gun control laws compare to other states 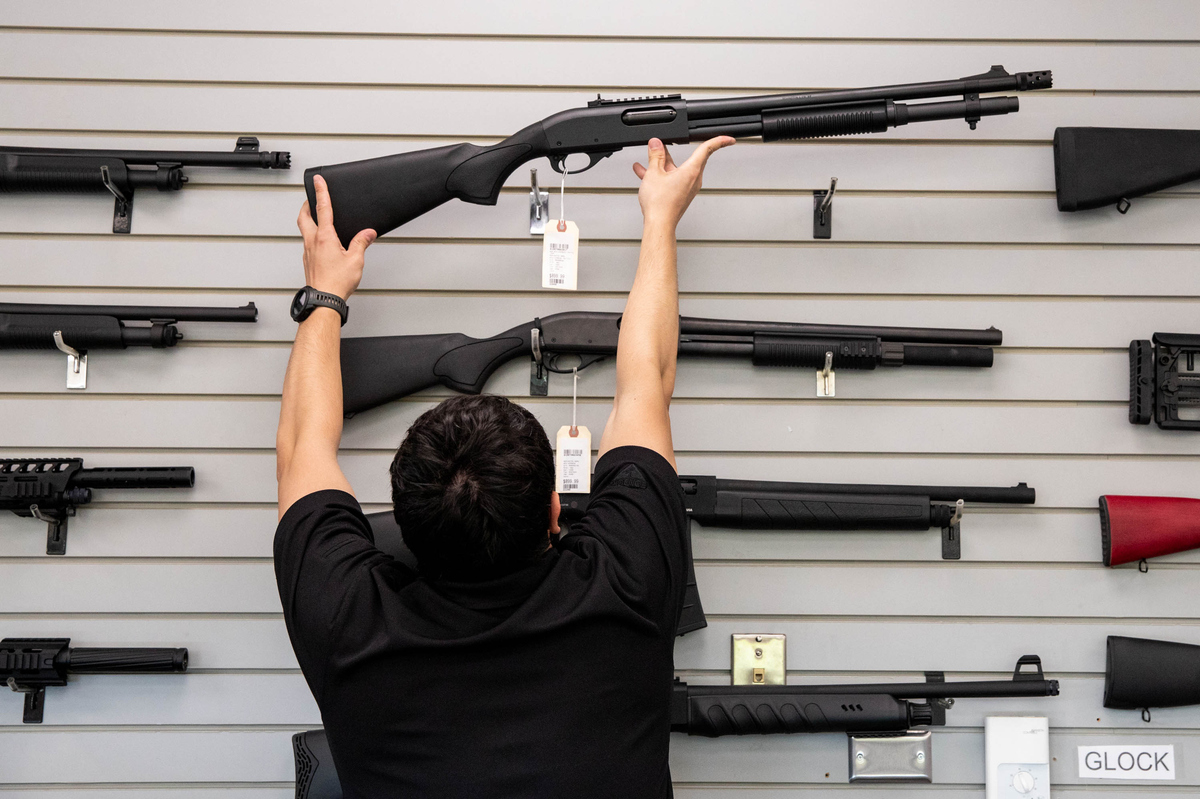 An employee puts back an Remington 870 shotgun for sale at Wade's Eastside Guns in Bellevue on Monday, Aug. 22, 2022. (Amanda Snyder/ Crosscut)

Washington added to its arsenal of gun-violence prevention laws this past year, but the Evergreen State still has a ways to go before it can claim to be the national leader on firearm regulations.

Gun laws earned Washington the 10th spot in a 2021 ranking of state firearms laws from the Giffords Law Center to Prevent Gun Violence. Washington landed the ninth spot on a similar list from Everytown for Gun Safety this year. On the other side of the gun law debate, The Best States for Responsible Gun Owners list from a group called AZ Defenders seems to agree with the other rankings, with Washington listed as 42nd best.

Amid rising gun violence (according to the Pew Research Center and as reported in news outlets) advocates are pushing for specific reforms, but the CEO of the Alliance for Gun Responsibility in Washington state says elected officials lag behind public interest on this issue.

The Washington Legislature did pass several new gun restrictions earlier this year as mass shootings reignited anxieties and debates about public safety. Those new laws include a ban on high-capacity magazines, a ban on openly carrying firearms in specified locations, as well as a ban on the manufacture, assembly, sale and purchase of untraceable or so-called “ghost” guns. 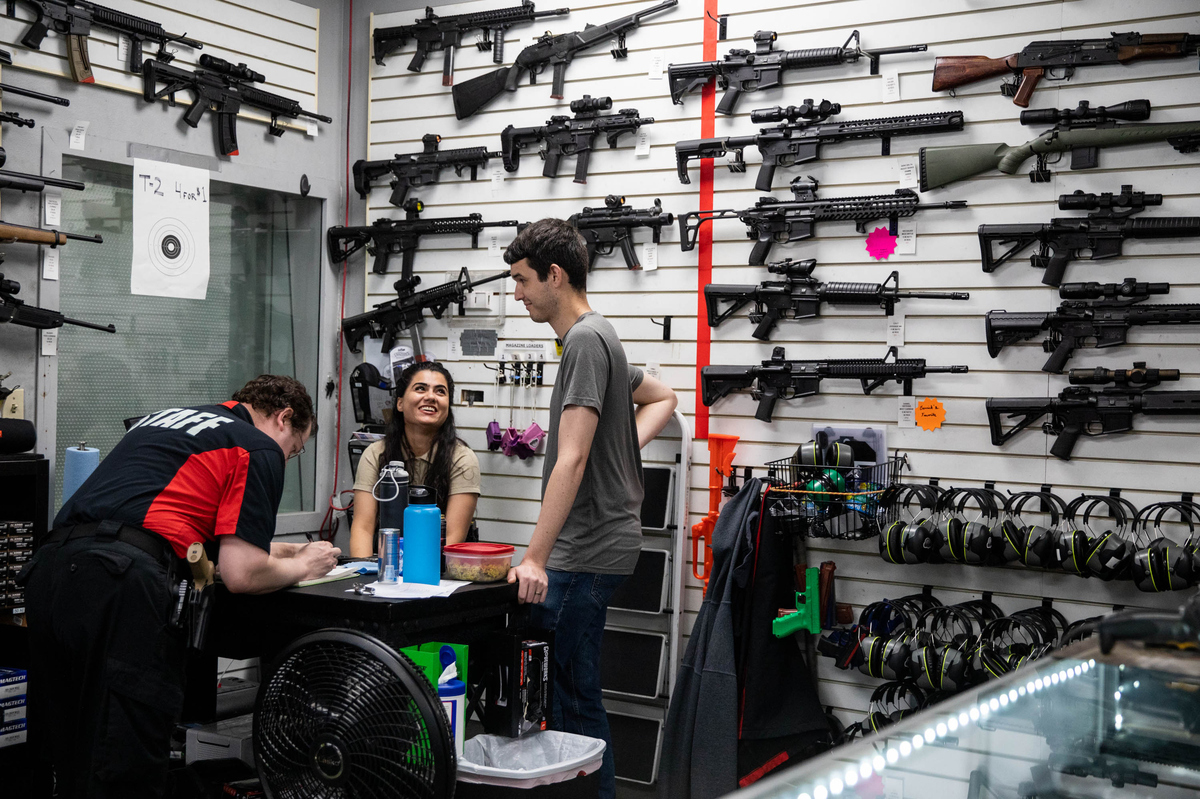 A few different measures, like restrictions on assault weapons, are up next for advocates in Washington and would push Washington closer to states like California, Connecticut and New Jersey.

Washington got a B ranking on the Giffords list last year, with advice for improving that grade including some of the new legislation the state passed in 2022. California gets an A ranking on the same list for both its laws and the way the state invests in areas like community violence intervention and gun violence research.

The call to restrict assault weapons has been a heavy political lift historically, said Hopkins, who likened it to the push to ban high-capacity magazines, which Washington successfully accomplished this year. 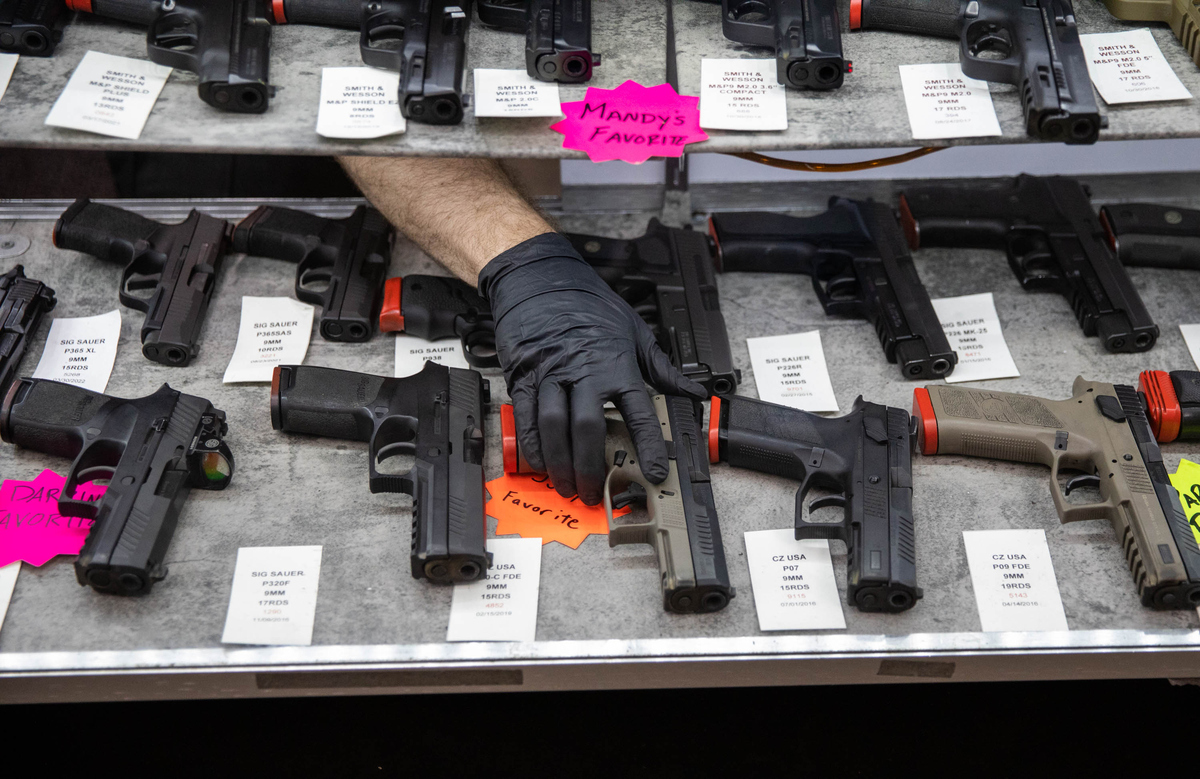 An employee returns a 9mm handgun to the display case at the Bellevue Indoor Gun Range on Monday, Aug. 22, 2022. (Amanda Snyder/ Crosscut)

An employee returns a 9mm handgun to the display case at the Bellevue Indoor Gun Range on Monday, Aug. 22, 2022. (Amanda Snyder/ Crosscut)

Washington’s gun laws: Where we lead

The Evergreen State takes the lead on gun control in several areas, including its mandated background checks and waiting periods, bans on openly carrying guns at protests and its extreme risk protection order law, which established a process for keeping guns away from people who are a danger to themselves or others.

The state’s recent high-capacity magazine ban had been years in the making.

“It’s a law that we’ve been working to pass for more than six years,” said Hopkins of the Alliance for Gun Responsibility. “It was a huge win for Washingtonians and for the safety of our communities.”

Hopkins thought back to other wins since her start at the Alliance, including the establishment of the state’s Office of Firearm Safety and Violence Prevention. 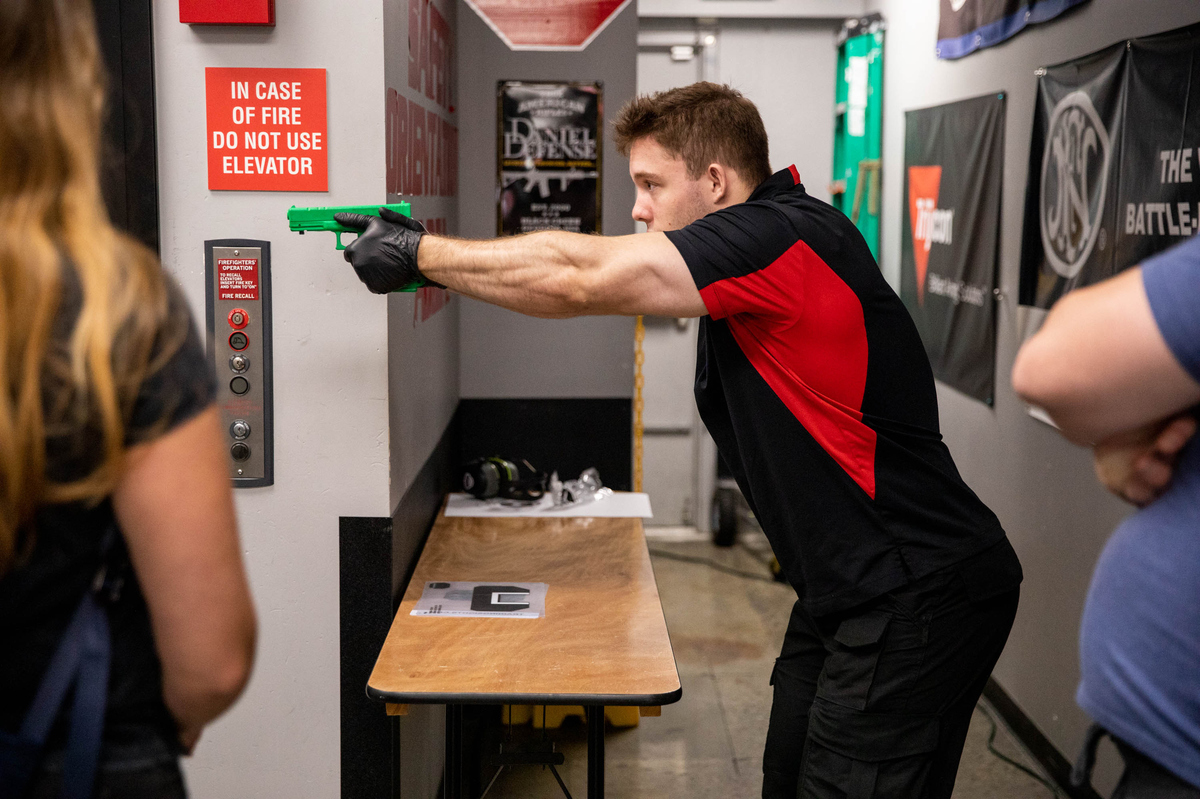 Also notable for Larry Wechsler, president of Washington CeaseFire, was the move to raise the age a buyer must be to get a semiautomatic firearm in Washington. Washington CeaseFire is a gun-violence prevention organization that he said works mostly in the greater Seattle area to raise awareness, educate and engage people.

On the flip side, Wechsler remained grateful for legislation Washington has not passed.

“Thank goodness we don’t have a stand-your-ground law,” Wechsler said, referring to the rule that gives people the right to use force in instances of perceived threat. Several states followed suit after Florida passed “stand your ground” legislation in 2005.

Despite these strides on the gun control front, the absence of some key legislation has left Washington behind other states in the rankings by gun-violence prevention organizations. 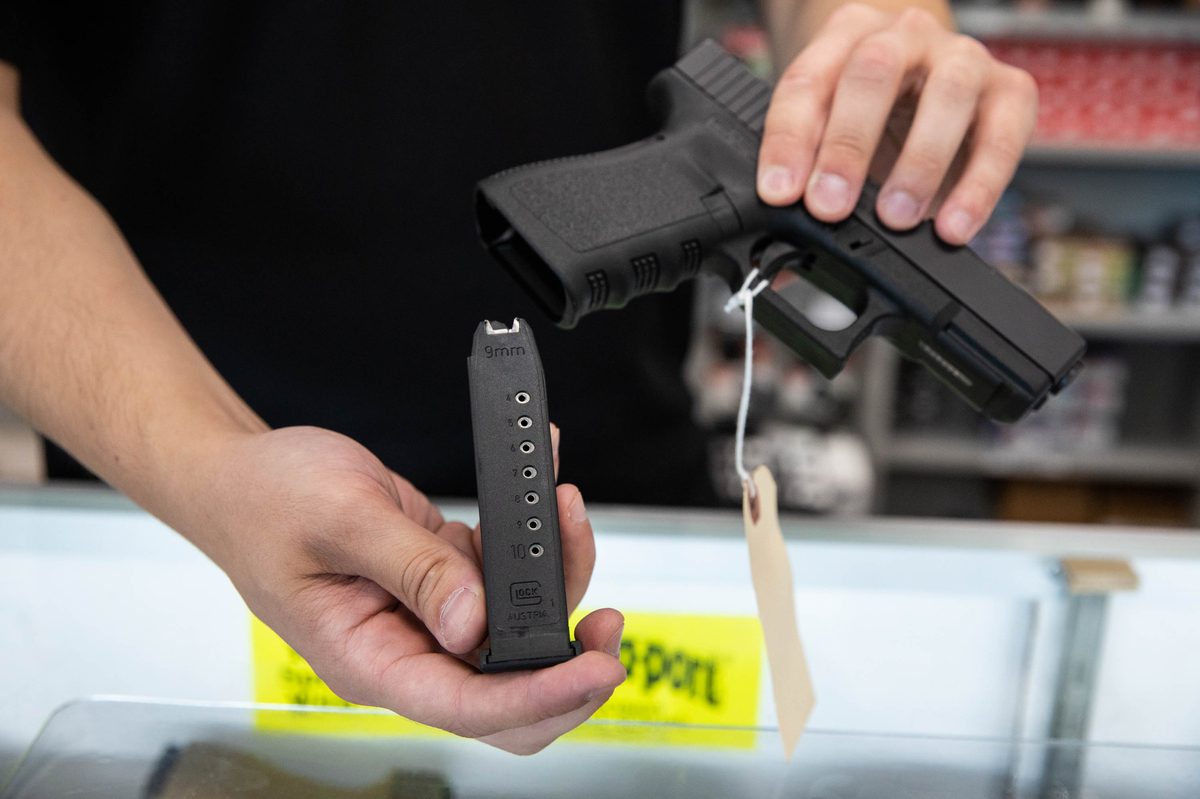 A gun with 10 rounds for sale at Wade's Eastside Guns in Bellevue on Monday, Aug. 22, 2022. As of July 1, the sale of ammunition magazines with more than 10 rounds is banned in Washington state. (Amanda Snyder/ Crosscut)

A gun with 10 rounds for sale at Wade's Eastside Guns in Bellevue on Monday, Aug. 22, 2022. As of July 1, the sale of ammunition magazines with more than 10 rounds is banned in Washington state. (Amanda Snyder/ Crosscut)

Everytown lists Washington as first in the “making progress” category, while ranking states like Massachusetts, Hawaii and New York as “national leaders.” California, which holds the top spot on Everytown and the Giffords Law Center’s rankings, passed legislation in areas that Washington has yet to OK – namely a ban on assault weapons.

Washington Attorney General Bob Ferguson has pushed to ban the sale of military style assault weapons for years. This measure can be a hard sell when guns are part of the culture, according to Wechsler of CeaseFire.

“Especially in the rural communities, where guns are just seen as part of life,” he said. “Even Democratic representatives from these areas won’t vote for that assault weapon ban because they don’t want to offend their constituents.”

Semiautomatic weapons are among the most popular firearms sold for both hunting and self defense. The National Rifle Association’s Institute for Legislative Action released a statement in response to a federal bill that would criminalize the sale, manufacture and possession of semiautomatic assault weapons.

“Gun control advocates in Congress are spearheading an assault upon the freedoms and civil liberties of law-abiding Americans,” executive director Jason Ouimet said in the statement, arguing the proposed restrictions go against Supreme Court rulings. 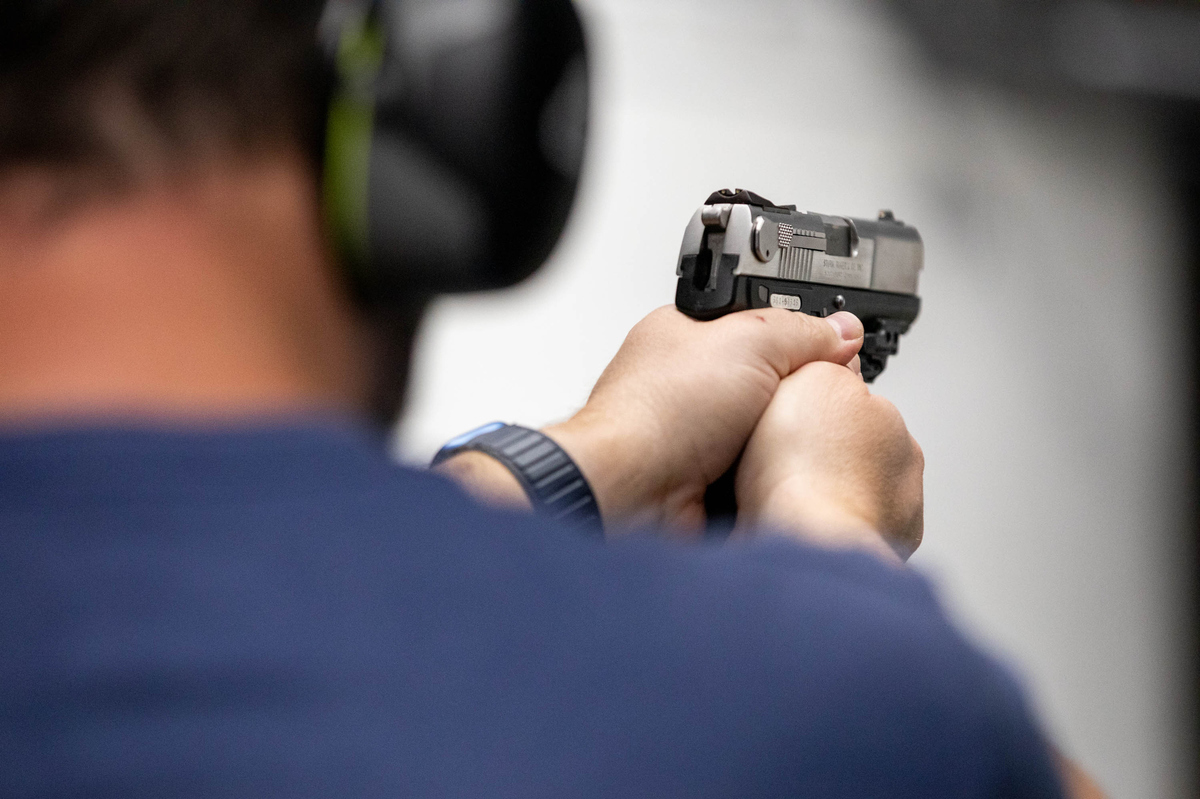 Wechsler considers this moment in time as a sigh-of-relief period after Washington passed its most recent gun laws.

Hopkins hopes to see Washington implement some restrictions on assault weapons; expand training and waiting period requirements; and push for accountability measures on the supply side – which could look like, for example, requiring dealers to lock up their firearms when their businesses are closed.

Still, Hopkins believes the push to reduce firearm violence goes beyond legislation – arguing for investment in communities, community-based solutions and in public education, as well as a change in the culture.

“Gun laws are one piece of the puzzle,” she said.

Lawmakers and advocates who oppose stricter gun regulations agree with some of those sentiments. Both sides want to see better mental health support to prevent people from using guns to harm themselves or others.