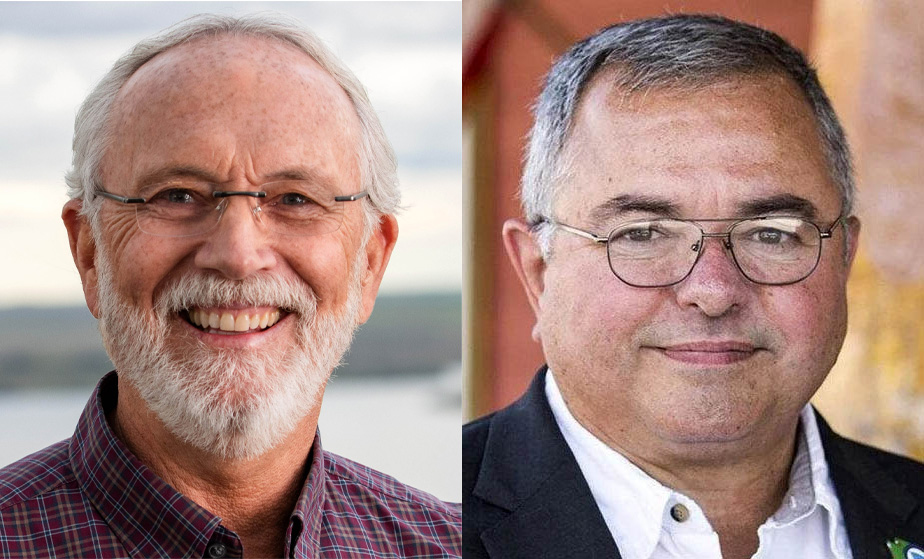 A Republican congresswoman who voted to impeach former President Donald Trump losing her primary to a Trump-endorsed challenger. No general election GOP candidate for secretary of state, despite the party’s dominance in that office for decades. A red wave for the state Legislature that didn’t materialize.

While Donald J. Trump didn’t appear this year on the ballot, the former president’s presence floated over a slew of Washington’s midterm Aug. 2 primary election races – and is helping shape the dynamics of the November general election.

The most closely watched example of that remains in play this week in Southwest Washington's 3rd Congressional District. On Monday, U.S. Rep. Jaime Herrera Beutler, R-Battle Ground, slipped into third place after gradually losing ground in daily vote tallies to Trump-endorsed challenger Joe Kent for the second slot in the top-two primary. Democrat Marie Gluesenkamp Perez led the nine-way primary with 31%. If Monday's results hold, Herrera Beutler, first elected in 2010, will not advance to the November general election.

Meanwhile, U.S. Rep. Dan Newhouse, R-Sunnyside, appears to have fought off a challenge in the 4th Congressional District in a crowded primary that included several Republicans, most notably former Republican gubernatorial candidate Loren Culp, who touted his own Trump endorsement.

The plethora of pro-Trump congressional challengers in both races helped to dilute enthusiasm to oust the incumbents, as measured in a Crosscut/Elway Poll released last month. In that survey, of the 32% of voters saying they would support a Republican in their congressional district, 59% indicated they would vote for a Trump-backed candidate.

While Trump only endorsed one challenger for the two incumbents, each of those congressional races had multiple supporters of the former president vying for a slot in the general election. That factor seems to have spared at least Newhouse.

“The Trump people shot themselves in the foot by running so many candidates,” said pollster Stuart Elway.

Regardless of who advances in the 3rd Congressional District, the GOP will support their candidate, especially with the Democratic-held U.S. House the most likely chamber in Congress to flip, according to Washington State Republican Party Chairman Caleb Heimlich.

“All Republicans would agree that we prefer a check on the Biden administration in Washington, D.C.,” Heimlich said.

There, Republicans are looking to unseat U.S. Rep. Kim Schrier, D-Sammamish, with former GOP candidate for attorney general Matt Larkin advancing to November. Heimlich praised Larkin for running a strong campaign and predicted that November voters would resonate with his message on the economy and public safety.

The fall election featuring Schrier – who was elected and reelected in tough races in 2018 and 2020 – promises to be another tough one. On Monday morning, Schrier, a pediatrician, had captured about 48% of the primary vote share, with another Democrat claiming 1%.

Washington State Democratic Party Chair Tina Podlodowski argued that the rollback of abortion protections – which came after the confirmation of three Trump nominees to the Supreme Court – would rally voters against Larkin, who has praised the Dobbs decision on abortion.

“Given the candidate she’s running against, the contrast couldn’t be more clear,” said Podlodowski.

Meanwhile, the special statewide election for secretary of state – for the state official who oversees Washington’s elections system – saw the best news for Democrats for that office in decades. Voters have picked a Republican to lead that office ever since 1964.

Gov. Jay Inslee last autumn appointed Hobbs, a moderate Democrat from Snohomish County, to lead the office after thrice-elected Republican Kim Wyman left in the middle of her term to take an election-security post in the Biden administration.

The office under Wyman had been a critical center of the debate over both election security and over claims of fraud – which numerous courts had dismissed – by Trump and Culp.

In the primary, the conservative vote split among a quartet of conservatives: Bob Hagglund; Sen. Keith Wagoner, R-Sedro Woolley; former Sen. Mark Miloscia, R-Federal Way; and Tamborine Borrelli, a former Bernie Sanders supporter who this year ran as an America First candidate and who has alleged election fraud in the state.

That split allowed an independent candidate, Pierce County Auditor Julie Anderson, to finish second for the chance to challenge Hobbs. As of Monday, Hobbs had drawn 41% and Anderson had 13%, with Wagoner at 12%.

Whether that’s good news for Hobbs – who didn’t come to the role with previous election experience – remains to be seen.

“There's certainly going to be a segment of the population that's not going to vote for a Democrat,” said Elway. “What are they going to do? That's a big question.”

Presuming the election results hold, and no Republican advances, it will make at least the third statewide executive election in recent years for a party to be shut out.

In 2016, Democrats ceded the state treasurer general election after their primary candidates divvied up the primary vote share, allowing two Republicans to advance. The opposite happened in 2020, with the lieutenant governor’s race winnowing down to a pair of Democrats that November.

GOP party officials are having conversations about whether and how to help limit the number of candidates, Heimlich said: “We want to obviously preserve choice for the November general election.”

For now, it remains to be seen whether state Republicans will throw their support behind Anderson.

Party officials are set to meet in August, Heimlich said, and “will decide if the Republican party will issue a statement of support for either candidate in that race.”

Little change at the Legislature

Earlier this year, Democrats braced to lose legislative seats across Puget Sound amid rises in crime and in prices for gas and groceries, and as Democratic President Joe Biden’s popularity sank.

But the August election results showed Democrats generally holding on to their seats. And while they trailed in the vote share in a handful of races, they also led or remained close in a handful of Republican-held seats. If that voter sentiment carries forward to November, it will allow Democrats to essentially keep their comfortable House and Senate majorities.

“All year, all cycle long we’ve been planning for this to be a tough year,” said Rep. Joe Fitzgibbon, D-West Seattle, who leads the campaign arm for House Democrats. He added: “I also think that there was an inflated narrative about a red wave that was never really validated by evidence. We probably got caught up in all that.”

Fitzgibbon and Podlodowski both credited the U.S. Supreme Court’s Dobbs v. Jackson opinion on abortion rights as one motivating factor that turned Democrats out.

“Obviously the Dobbs decision had a big play in this, I mean women voted in greater numbers than men,” said Podlodowski.

In the upper chamber, Sen. Emily Randall, D-Bremerton, led her Republican challenger in the 26th District, Rep. Jesse Young, R-Gig Harbor, in what has been considered the most competitive state Senate race. And in an open seat for Southeast King County’s 47th District, former state lawmaker Claudia Kauffman on Monday morning continued to lead fellow Democrat Satwinder Kaur by a few dozen votes. The winner in that contest will join Republican William Boyce on the general election ballot. Boyce Monday had nearly 46% of the vote share.

For Republicans, the results in Whatcom County’s 42nd District remained a bright spot. Democratic candidates for both House seats received less than 50% of the vote share. The same was true for Sharon Shewmake, a Democratic state representative from that district who this year ran for the upper chamber to challenge newly appointed Sen. Simon Sefzik, R-Ferndale.

None of that means things are settled, however, for the November general election.

House Minority Leader J.T. Wilcox, R-Yelm, and Heimlich both pointed to the 2018 blue wave, which came during the Trump presidency. That August primary brought a shock, with more than 18 GOP candidates for Republican-held seats trailing in the vote tally.

But Republicans rebounded and minimized their losses in a tough election cycle that November, holding their House and Senate losses that November to 10 seats.

Heimlich pointed to several legislative races where Republicans were earning at least 45% or more of the vote share – like Boyce in the 47th District Senate race – as potential pickups if voter mood or turnout shifts by November.

“The 2018 primary to the general certainly showed that the primary is not set in stone, it’s not definitive, there's still three months left of campaigning,” Heimlich said.

On the other side, Podlodowski pointed to Republican-held House seats in the 26th District and the Vancouver area’s 18th District, both open seats with no incumbent, where Democrats showed a strong performance. It could allow Democrats to actually pick up seats this fall under the right conditions.

Primary voters, meanwhile, didn’t appear to be rewarding candidates who have questioned state and national election results in the absence of evidence of widespread voter fraud.

The narrative pushed by Trump that the 2020 election had been stolen from him – and a similar claim made by Culp that year after his loss to Inslee – has driven some conservative activists to question Washington’s voting system and seek offices that oversee elections.

In the secretary of state’s race, which oversees Washington’s elections, the most prominent elections skeptic, Borrelli, drew only about 4.5% of the vote.

Borrelli leads a nonprofit organization, Washington Election Integrity Coalition United, which last fall sued Inslee and alleged that the Department of Licensing was working actively to register noncitizens to become voters. A commissioner with the state Supreme Court dismissed that challenge, ruling that the “Petitioner offers no competent evidence of voter fraud based on noncitizen voter registration.” The Washington Attorney General’s Office has since filed a complaint against the group’s attorney with the state bar association for a frivolous claim.

At the same time, challengers who have talked about fraud who ran for county auditor positions – which are the local offices that administer elections – were trailing both Democratic and Republican incumbents around the state.

In Spokane County, Auditor Vicki Dalton was leading 52 to 47 against a challenge by Rep. Bob McCaslin, R-Spokane Valley. Voters likewise were rejecting a challenge in Pend Oreille County, with the incumbent Republican, Marianne Nichols, holding a sizable lead against a challenger who believes the election was stolen from Trump.

In Clark County, Auditor Greg Kimsey was handily beating a challenger, Bret Simpson, whose website has touted his work with Borrelli’s nonprofit group, as well as the Washington Voter Research Project.

That group has sent people to knock on doors of voters all over the state in search of potential vote fraud, according to a report in The Seattle Times. The group handed over lists of what it thought were suspicious voters to a couple county auditors. But those auditors – Kimsey being one of them – have said that a majority of names on the list that the group considered suspicious were valid military and overseas voters.