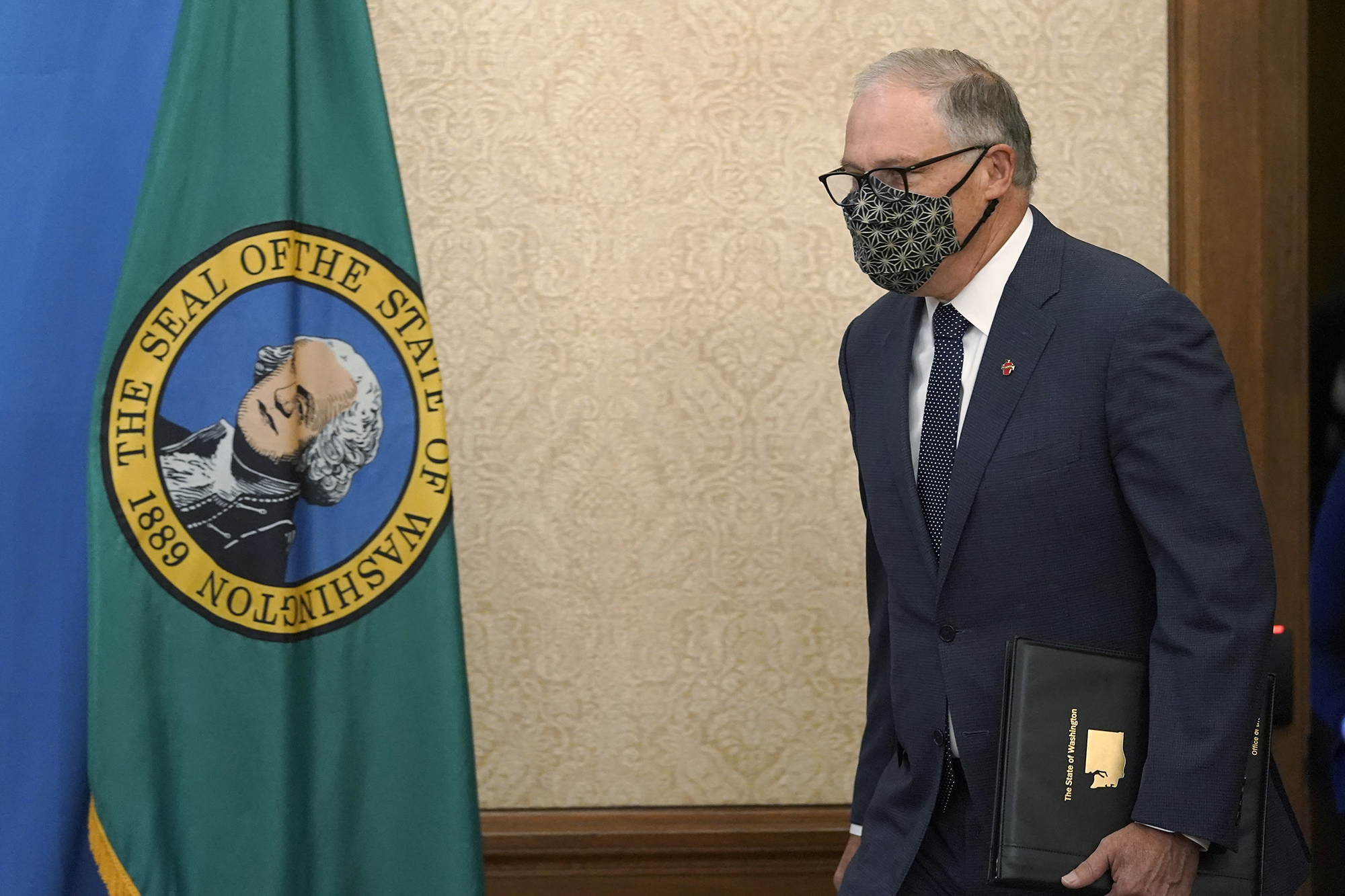 Washington Gov. Jay Inslee walks past the state flag as he arrives to speak at a news conference, Sunday, Nov. 15, 2020, at the Capitol in Olympia. Inslee announced new restrictions on businesses and social gatherings for the next four weeks as the state continues to combat a rising number of coronavirus cases. (AP Photo/Ted S. Warren)

Gov. Jay Inslee will lift Washington’s state of emergency for COVID-19 by the end of October, ending more than two and a half years of unprecedented executive powers used to tamp down the pandemic.

Inslee’s announcement in a Thursday news conference comes as the pandemic – along with public appetite for government controls to curb the virus – have waned, with more people becoming vaccinated or getting immunity after recovering.

More than 14,000 Washingtonians have died of COVID-19, according to state health data, which is among the lowest per capita COVID death rates among the states. Still, Washington continues to announce about 10 deaths daily due to the virus, according to the governor’s office.

“We’ve come a long way the past two years in developing the tools that allow us to adapt and live with COVID-19,” said the governor. “Ending this order does not mean we take it less seriously or will lose focus on how this virus has changed the way we live. We will continue our commitments to the public’s well-being, but simply through different tools that are now more appropriate for the era we’ve entered.”

Some pandemic programs – such as the WA Notify contact tracing, testing programs and mobile vaccination clinics – will remain operational after the state of emergency ends. 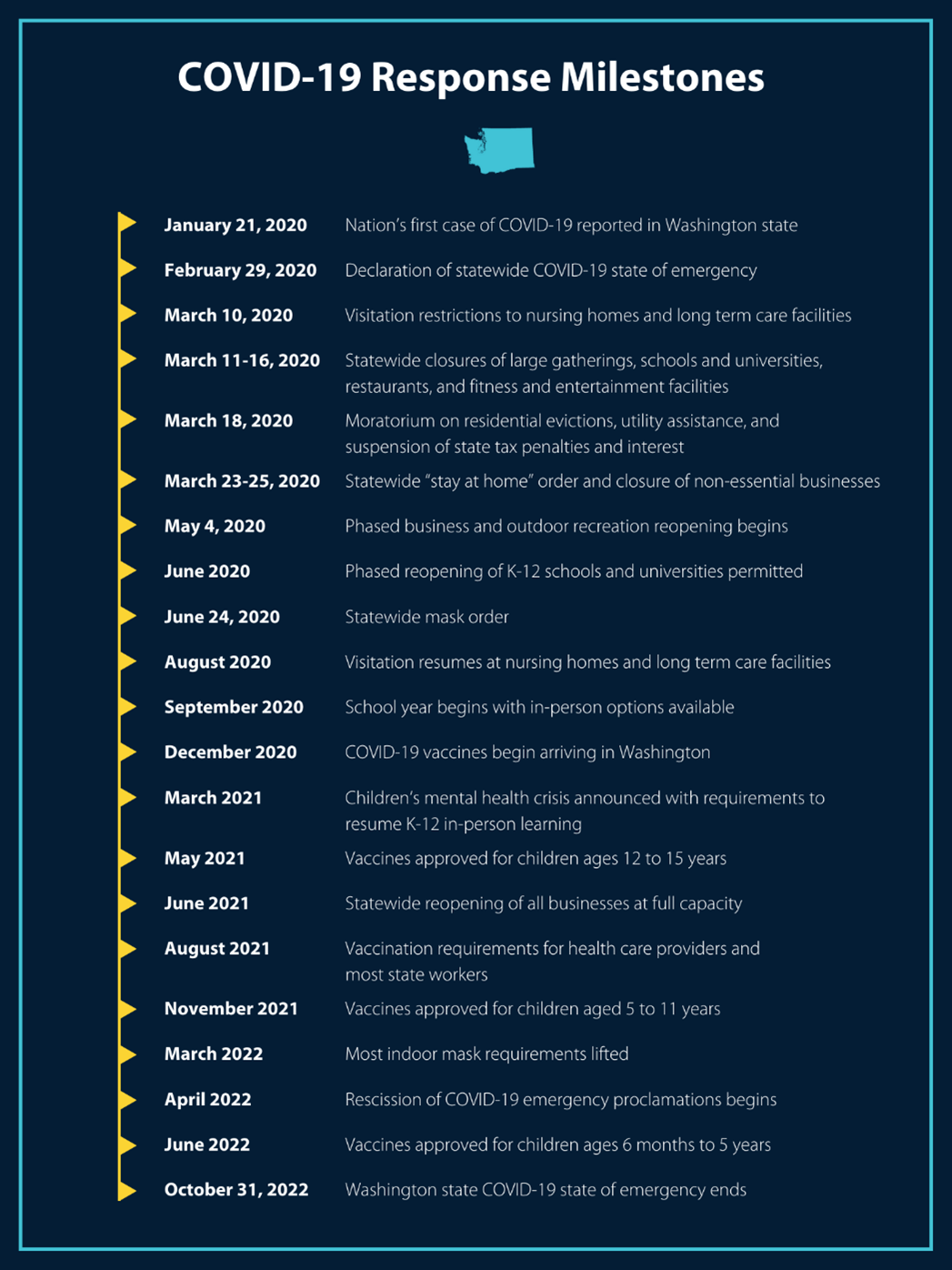 The Legislature long ago gave the executive branch sweeping power during declared emergencies. During the pandemic, Inslee implemented some of the strictest measures among the states after declaring a state of emergency at the end of February 2020.

In March 2020, with Washington at the epicenter of the first documented outbreak in the nation, the governor shut down schools, banned large public gatherings and businesses deemed nonessential. In the following months, he ordered requirements for wearing masks, set up regional metrics for reopening, and imposed vaccine mandates for health care workers and state employees.

A separate order by the state Department of Health requiring face coverings for health care and long-term care facilities will remain in place beyond the end of the state of emergency. The governor is also considering options to make sure workers have workplace protections should they want to wear a mask on the job.

The end of the emergency-power declaration will also nix the vaccine requirements for school and health care workers, although employers can still require them. The governor is keeping COVID-19 vaccine requirements in place, however, for workers at most Washington state agencies.

Republican state lawmakers – who are in the minority in Olympia and who were sidelined for much of the pandemic response – have long criticized Inslee for continuing the state of emergency.

In a statement, said Senate Minority Leader John Braun, R-Centralia said the governor's approach was justified for early in the pandemic.

But, “Republicans were right to question his actions, whether he appreciated that or not, and have maintained that his clinging to this extra authority was unfair to the other branches of government," Braun said in prepared remarks. "In recent months it’s become obvious he was running out of excuses for continuing the state of emergency, and from that standpoint I welcome today’s announcement."