Market-weary house hunters are finding reprieve in the City of Destiny — and they are bringing the high prices with them. 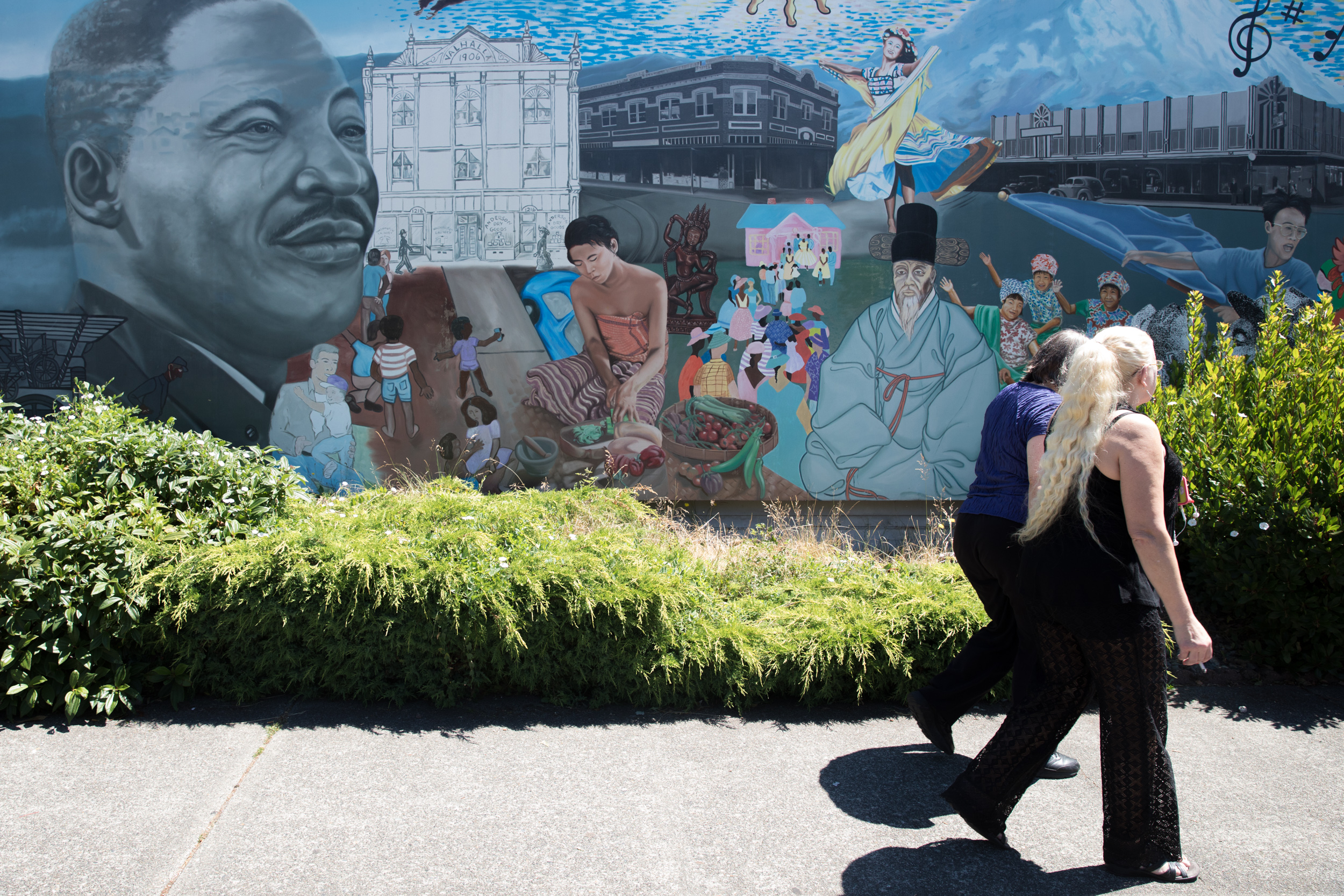 When RJ and Ann Casey moved to Seattle from Chicago 4 1/2  years ago, they landed a studio apartment for $1,800 a month. With RJ working as an editor at Fantagraphics, a comic book publisher, and Ann running a physical therapy clinic, the rent was manageable for a time. But after a few years, the couple wanted to start a family; the studio apartment would no longer do. Looking to truly set down roots, they decided to buy a house. Still, even with dual incomes, a home in the Seattle market was out of reach.

“We didn’t even look for houses in Seattle,” says RJ. “The lowest-priced houses near us were $500,000 and most were between that and $1 million.”

RJ and Ann looked around the Seattle suburbs for a while, but weren’t satisfied with the properties within their price range. Then they found it, a place where they “felt the most at home and where we could afford a house at the time.” Tacoma. They bought their house in Central Tacoma, a big neighborhood west of downtown and about 30-some miles from their workplaces. The terrible commute aside, RJ’s happy with the couple’s decision. Two-and-a-half years in, they’re feeling settled and finding it “easy to get to know people here and find restaurants and bars to become regulars at.” Just recently they had their first kid.

RJ and Ann’s story is becoming commonplace. With median home prices in Seattle well above $800,000 and above $640,000 in King County, homeownership is now well out of reach for many middle-income people in the area. No such problem in Tacoma, where the median home price is about $288,000. It’s hard to put an exact number on how many Seattle-area residents are migrating to Tacoma, but real estate agent Marguerite Martin says, “There’s no question” the phenomenon is real.

The U.S. Census Bureau’s most recent county-to-county migration numbers show that the trend has been underway for some time: between 2011 and 2015, 14,311 people moved to Pierce County from King County. The Seattle Times reported that in 2016, Pierce County had the “largest net increase of people moving in” of any county in the United States. As of 2017, Tacoma had grown to 213,400 residents, up 7.7 percent from 2010.

That flood of new residents is bringing splashes of Seattle’s cost of living with it. Tacoma’s median home price is up 14.8 percent over this time last year, continuing a city trend since 2014. Rents across the city jumped 7 percent over the last year, and as much as 10 percent in the central city. Though some Tacomans are happy to see new public and private investment pouring in, many longtime residents are watching their neighborhoods transform and worrying they’ll eventually be casualties of the region’s boom, pushed out by the people pushed out of Seattle.

Martin, the Tacoma realtor, feels a sense of responsibility for what’s happening to her city. In 2014, she started a website called Move to Tacoma to promote her business. She created neighborhood guides and blogged about restaurants, schools and other things an out-of-towner might be curious to learn about the city. At first, she says, she didn’t specifically have Seattle-area buyers in mind at the time.

“I was thinking about people moving here for jobs at the hospital or the [military] base and all the other reasons people might come,” Martin says. “People relocating here would google neighborhoods and find horrible shit from the olden days written by people running their mouths in forums.”

But it wasn’t long before she started marketing Tacoma as an affordable, attractive alternative to Seattle’s eye-popping prices. On Twitter, she would retweet stories of rising rent and home prices in the city to the north. Martin’s blog featured profiles of Seattleites happy with their new lives in Tacoma. Her marketing effort paid off with plenty of business. She eventually stopped tracking where her clients were moving from, but each year, she says, she had more and more of them from Seattle and King County.

Of course, one website cannot be held solely responsible for the change in Tacoma’s housing market. But as Martin watched prices rise and heard stories of longtime residents being displaced, she started to feel guilty. “This city is not ready for what’s happening to it,” she says. “It’s not ready for what’s coming. It creates a moral question for a realtor who’s making their living in a city where housing is unaffordable for many people who already live here.” 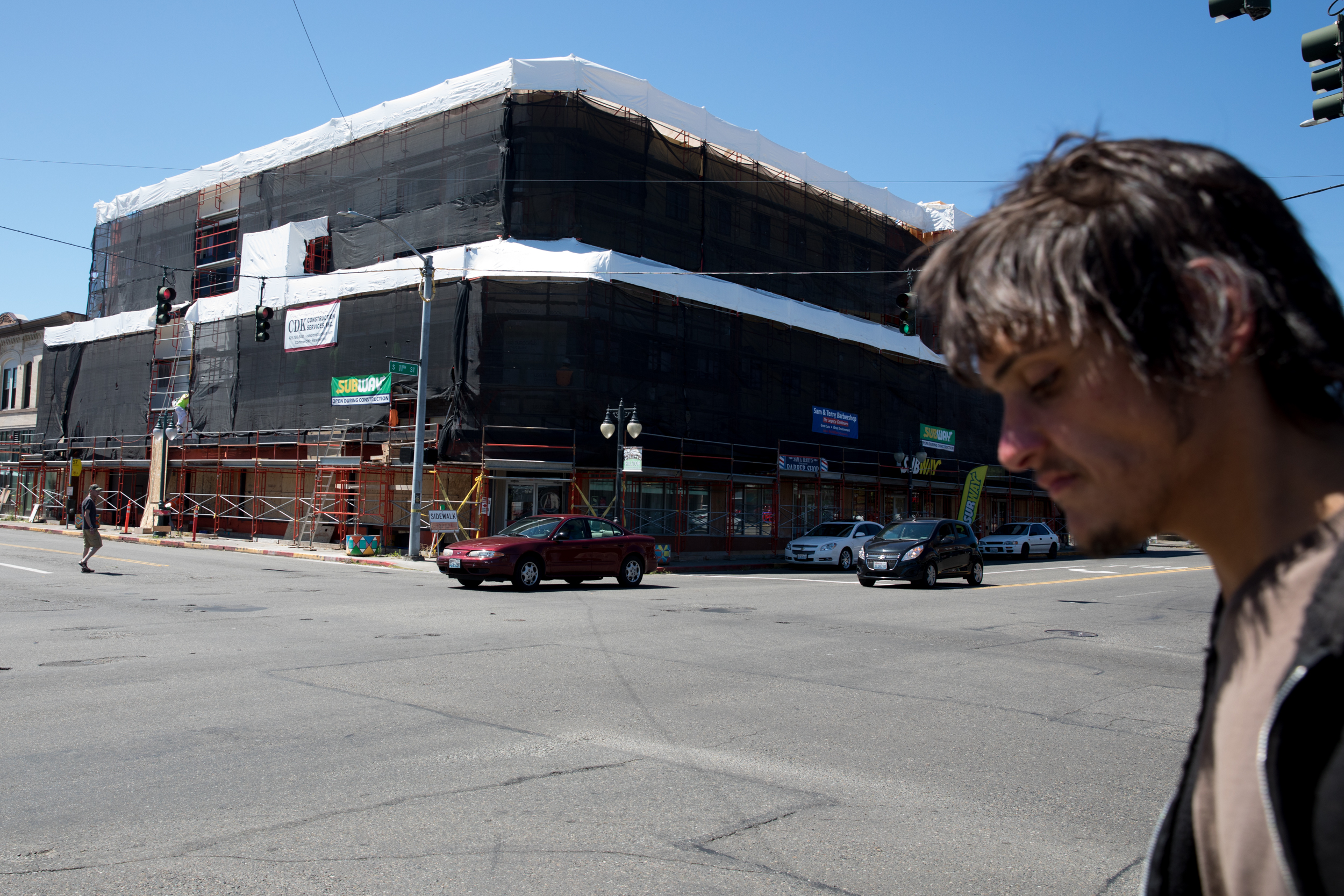 The Hilltop neighborhood has become ground zero for that change. Located just a few blocks west of downtown, Hilltop was historically the city’s African American stronghold. These days it's gentrifying, a process fueled by the many new developments taking shape there in anticipation of a light rail expansion that will connect the neighborhood to the larger region. Though the station is still years away, longtime residents say the shifting landscape is already bringing in wealthier, whiter residents and pushing out the lower-income African American community.

The potential impact of the station, which is slated for a 2022 opening, is outlined in a report produced by the Federal Transit Administration. It found that 45 percent of Hilltop households are already cost burdened meaning that resident are paying more than 30 percent of their income on rent or mortgage. That is compared to 39 percent city wide. For those people already struggling to pay their bills, life will certainly get harder. Rents and property values are rising in response to new development and will likely continue to do so once the light rail opens.

The new interest in the neighborhood and the accompanying rise in prices has led to an exodus of black Tacomans from Hilltop – a story with stark parallels to the displacement of residents in Seattle’s Central District. The Seattle Times reports that Hilltop lost 35 percent of its African American population between 2010 and 2015.

“We have longtime African American homeowners who can no longer afford to stay where they are. There are very few businesses of color. In the 90s, the Martin Luther King Way corridor was full of minority owner businesses. Now we’re down to seven. It’s tough to see,” says Brendan Nelson, board president of the Hilltop Action Coalition, a community group that’s been working in the neighborhood for three decades.

Nelson says he is happy to see some of the new businesses. Hilltop has long suffered from a lack of investment in part due to a reputation for gang violence lingering from the late 80s and early 90s. But he is also worried that the hip bars, restaurants and shops are going to erase what remains of his community. He fears, too, that developments like the 249-unit apartment building going up near the future light rail station will continue to drive up costs.

“I would love to see more minority-owned businesses and businesses that reflect our community and its history and fabric,” he says. “If a developer is thinking about coming to Hilltop, they should really engage with the community about what we would like to see. Ask how they can be a part of the community instead of just a passerby.”

Nelson has been working with the city to try and find ways for longtime Hilltop residents to benefit from the change, rather than just being pushed out by it. The Links to Opportunity Project is doing workforce development in partnership with local colleges to ensure some of the jobs created by light rail expansion go to existing residents.

It is one of a number of steps the city is taking in response to the rising cost of living. The Tacoma Housing Authority has been buying up property in Hilltop to expand its affordable housing offerings. In response to a Seattle developer buying the Tiki Apartments and evicting its residents – most of whom are low-income and many of whom have disabilities – the City Council voted to enact stronger tenant protections. In one district, the city is experimenting with a policy that requires residential developers building apartments with 15 or more units to make 10 percent of the units affordable to people earning 50 percent of the area median income.

That alone isn’t going to solve the displacement problem, especially if the wave of Seattleites heading south continues to grow. Self-described Tacoma booster Andrew Austin, who has lived there for much of the last 15 years, is hoping the city can find a way to encourage economic growth without losing the residents and culture that make up its identity. He says he’s been struck by the sight of construction cranes funded by private investment, something he’s seen very little of in his time in Tacoma. He sees new people and new investment as a chance to improve transit, parks, infrastructure, create jobs — all the things that thriving cities need.

“Wouldn’t we rather have a parking problem than a tumbleweed problem?” Austin asks. “If we grow right now it’s a good thing. We need to figure out how to do it well, rather than shun it.”

Martin, on the other hand, is worried the city won’t act quickly enough to get ahead of its problems. She already sees parallels to Seattle’s struggle with rapid population growth outpacing the supply of housing. “There isn’t enough housing for everyone. And people are actively fighting against zoning changes that would allow for more density.”

Still, Martin recognizes that prices are still rising in Seattle and its surrounding cities and as they get priced out, people are going to continue moving to Tacoma. Like Nelson, she hopes they do so with an eye towards joining the communities to which they’re moving.

“I think people have to have a sense of humility and responsibility when they move in,” Martin says. “It’s not lost on Tacomans that this place was a punch line for Seattlites who thought they were too good for it and now it’s their affordable solution.”