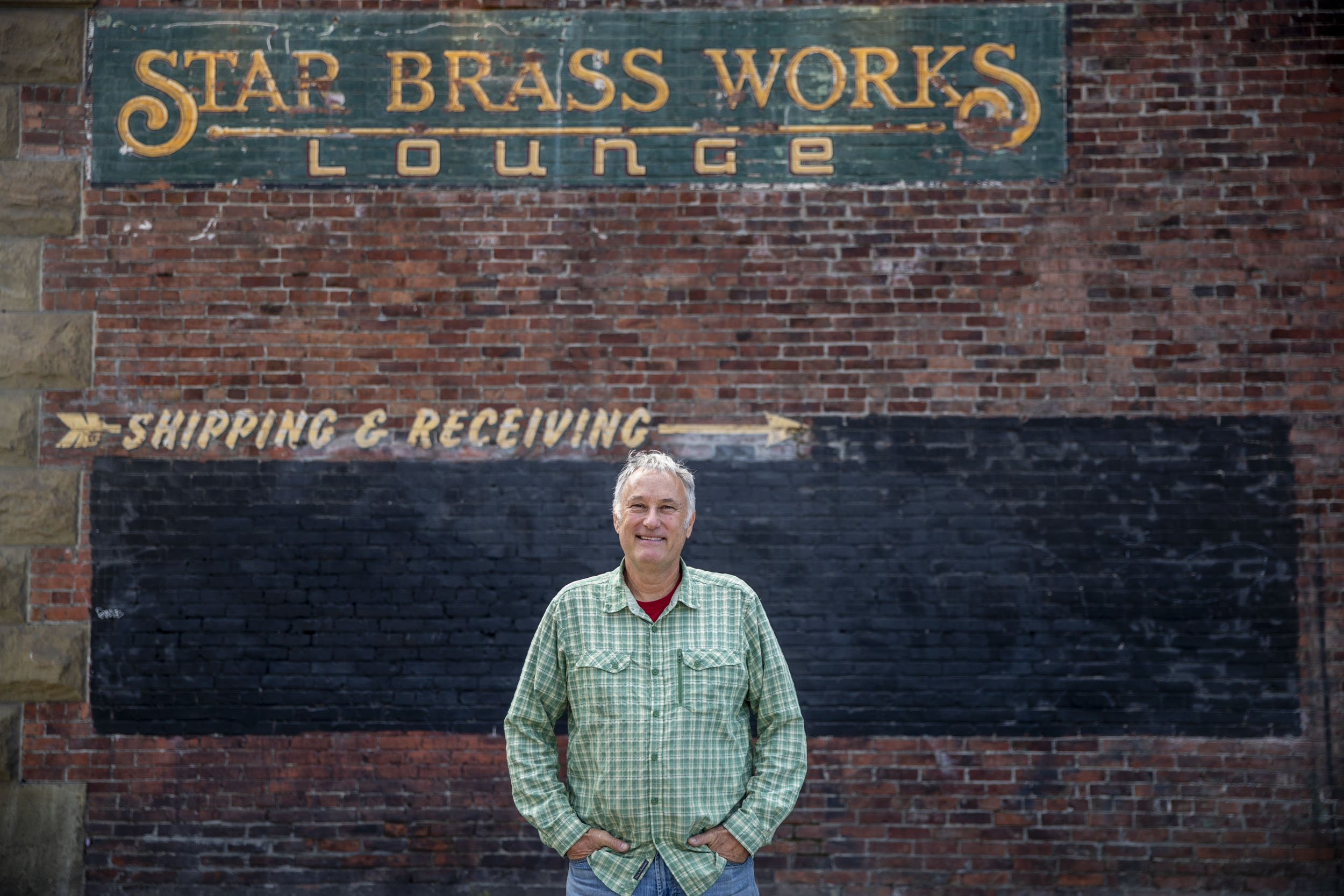 John Bennett in the Georgetown neighborhood of Seattle on May 8, 2019. Bennett owns 25 properties in Georgetown, purchasing his first in 1996. He says the historic preservation of the neighborhood is important to him. (All photos by Dorothy Edwards/Crosscut)

“I don’t want to be the complaining, grouchy guy,” says John Bennett over coffee at the Luna Park Café in West Seattle. Bennett owns the place, one of Seattle’s classic diners, noted for its milkshakes and vintage kitsch, like the kiddie Batmobile inside the front door.

One senses a “but” coming.

“I’ve lost every battle,” he says. Bennett is a preservationist, businessman and landlord who has sought to nurture and preserve a Seattle that is local, real and practical. It’s safe to say he feels he’s swimming upstream these days.

We talk about challenges to the future of his iconic café, hassles with the city, and his struggles to help preserve Seattle’s arts and heritage in Georgetown.

One thing that drives small business folk and many citizens crazy is the way the city is selective about enforcing rules. Bennett, for example, had a long fight with the city over an A-frame sandwich board sign for Luna Park that sat undisturbed for 28 years at the foot of a nearby off-ramp until the city told him to remove it and fined him $500 for violating sign rules.

After Bennett went through hearings, the city knocked down the fine to $250, which he reluctantly paid. Yet the sign, he says, wasn’t obstructing anything and, frustrating to Bennett, such signs have proliferated like spring mushrooms throughout the city, touting apartments and condos miles from where the units are. That’s in violation of the rule that says they’re supposed to be near their respective businesses. Don’t be surprised if the Luna Park sandwich board pops up again somewhere soon as a modest protest again the unfairness of the system.

Bennett has much bigger beefs, though. He’s trying to save the historic Stone cottage on Harbor Avenue Southwest from demolition. It was built in West Seattle at Duwamish Head by an eccentric woman, Eva Falk, and the modest house was covered with beach stones during the Depression with the help of Hooverville friends. It’s a one–of-a-kind character house that sits on property slated for development.

Bennett’s idea is to move it to city property at Alki Beach and have volunteers from the Southwest Seattle Historical Society run it as an interpretive center. Bennett says he can raise the funds to make that happen, but has only until the end of the year to find a new location. He’s frustrated with what he sees as a lack of response by the Parks Department to his efforts to discuss how it could work.

He’s also worried about planned work to Southwest Avalon Way outside his Luna Park diner. He says summer is his Christmas season — Luna Park makes enough during June, July and August to carry the café for the year. He begged the city not to work in front of his place during those months and was assured they would not. At least he thought so. But it turns out the city's plans include shutting down the street during the time for remaking it, essentially cutting off access to his place.

Amid these struggles he sees a bigger picture about Seattle. As he sees it, the local attitude used to be that if you had a good idea, do it. “Now it’s if you have a good idea, fight everybody in the universe and don’t get it done,” he says. 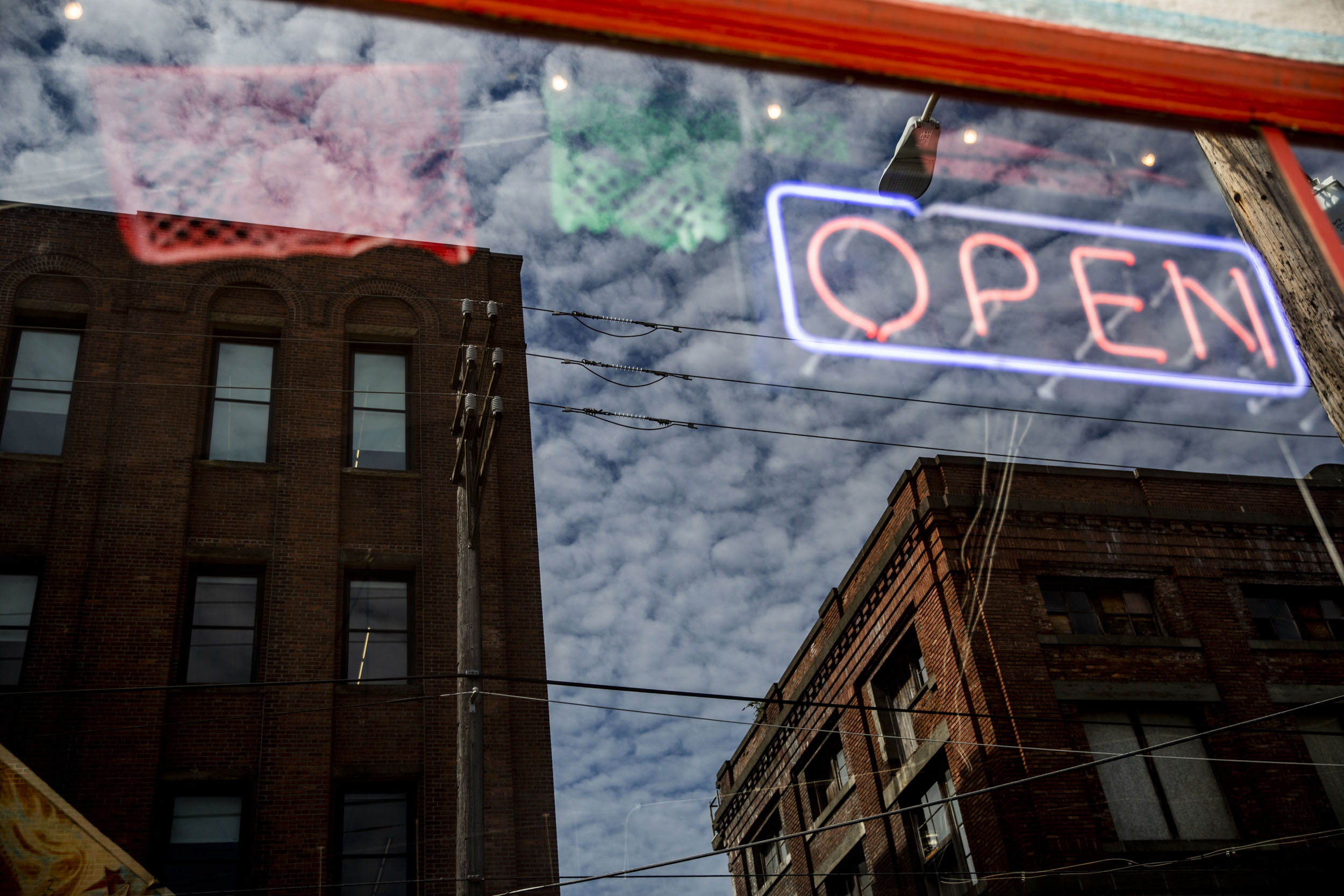 The Georgetown neighborhood of Seattle on May 8, 2019.

The Georgetown neighborhood of Seattle on May 8, 2019.

“Is Seattle dying?” he asks. “It’s dying not so much from opioids but from greed.” The town is full of developers and carpetbaggers driving up prices and buying people out, he says. Too many people are willing sellers, though it’s understandable. But the new development is often unaffordable and pushes out small, sole-proprietor businesses.

If people have tried to protect Seattle as a place where artists, industry and small business can survive, Bennett is one of them. He has played one of the key roles in the revival of Georgetown, where he owns 25 properties, many of them turn-of-the-century, two-story buildings along Airport Way. It’s a last stop for Seattle artists and creatives before they are driven out to Portland or Tacoma. He tries to keep rents low and provide space for working artists.

A living example of longtime Seattle creatives is Larry Reid of Fantagraphics, the bookstore, gallery and publisher of cartoonists. The company is a tenant in one of Bennett’s Georgetown buildings. During a recent walk I and Crosscut's Dorothy Edwards took with Bennett through the neighborhood, Reid — who is also active with the Georgetown Merchants Association — pops out of his shop with an enthusiastic endorsement. “He’s a great landlord because he doesn’t want to tear everything down,” he says.

Reid knows about building up and tearing down. He had a gallery in Pioneer Square during its early transformation in the ’70s, and has been a fixture in the arts scene in numerous neighborhoods artists have inhabited, revived and been driven out of by high costs and gentrification. Those include Belltown, Capitol Hill and South Lake Union. “Georgetown is the last bastion of the bohemian, blue-collar arts community,” he says.

That Georgetown hasn’t been entirely leveled is due to history, economics, and guys like Bennett. An early Euro-American community on the Duwamish, it flourished in the 19th century from agriculture, including nearby hop fields that fueled its emergence as a center of brewing beer (think Rainier). Saloons and sin followed, then local prohibition, which put a damper on that industry.

With the straightening of the Duwamish River and in-fill of the tidelands between Georgetown and Pioneer Square, the area morphed into an industrial district. Boeing Field shaped it, too, as it became a center of flying and manufacturing. But Georgetown declined following World War II.

It was never a large residential community, but it left behind a large collection of often-neglected buildings that redevelopment passed over.

Bennett began buying properties there in the 1990s because he wanted to restore them. Before getting into real estate, he ran a business fixing up and selling vintage jukeboxes, a business that’s died with the advent of eBay. But he was enchanted by the old brick structures, largely untouched, unrestored and retaining many of their original doors, paneling and exteriors. He wanted to save “the real old school Seattle” that was rapidly disappearing elsewhere.

They were perfect for artists’ housing and studios, with ground floors where creative retailers could get cheap rent. And the blue-collar nature of the neighborhood attracted artists — there was room to work, make noise, try new things. He could help make Georgetown into the kind of creative and hip place pre-Amazon Seattle used to have in abundance. “I knew I had a social responsibility,” he says. Today, arts in Georgetown thrive with performance and gathering venues, art walks and artists’ studios like Equinox.

Bennett’s tenants are more or less handpicked. A number of his properties form an early 20th century streetscape that faces the massive old brick Seattle Brewing and Malting complex. The stretch hosts places “that hadn’t been screwed with,” like the legendary Jules Maes Saloon where Bennett’s first bank loan for a Georgetown renovation was sealed when the banker was delighted to find “hangtown fry” (scrambled eggs and oysters) on the menu. The offerings have since changed, but that little taste of old Seattle, in Bennett’s telling, helped launch a neighborhood renaissance. 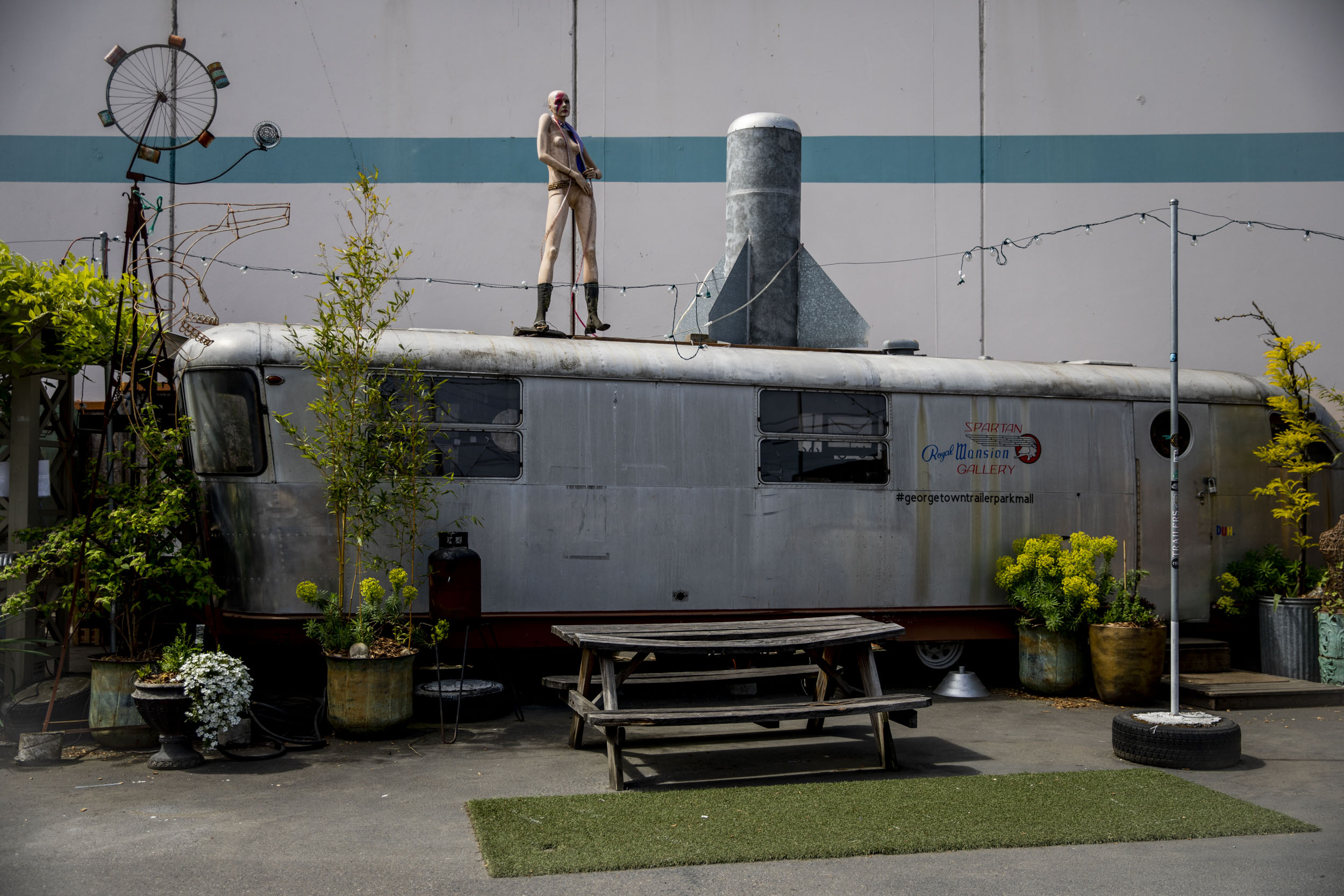 Nearby are Star Brass, a onetime metal works company converted into a lounge; the Palace Theater and Art Bar; the Georgetown Arts and Culture Center, an old hotel where the rooms are now artist studios or tiny apartments; and a parking lot converted into the Trailer Park Mall, a gathering of vintage trailers where vendors sell art, antiques and cookies.

Georgetown has a nice balance of industrial, retail, artist space and hipness that is tough to maintain. There are some advantages: being in Boeing Field’s flight path and being zoned industrial limit how tall it can get. There isn’t much residential — but lots of people work there. Massive trucks, trains and highways around and through it make it busy and kind of isolated from the rest of the city. On the ground it’s a fascinating place to walk and explore. Junkyards are next to art studios. Still, real estate prices are rising. You can sense Georgetown is not entirely immune to the pressures of a growing city. Its success could be leading it to a tipping point.

There are struggles here, too. The two buildings that make up the Georgetown Stables, for example, were converted by Bennett into a rental venue for parties and community events. The stables originally housed horses for The Meadows, an old race track on the site of nearby Boeing Field. He’s in a dispute with the city and faces penalties over compliance with city use regulations. Bennett says he was told his use for the stables was allowed, then years later the city decided it wasn’t. After $100,000 in renovations, he says, he’s in compliance now, but the city has levied $1.2 million in fines. He is currently negotiating with the city to get the fines removed. Whatever the fuller story behind the dispute, the fines reflect the struggles and costs of adapting old structures in revitalizing the neighborhood.

For Bennett his Georgetown properties are personal, each with history; a number were purchased from the families of the original early 20th century builders. Many belonged to the Italian and German families that farmed and brewed in the area during the Klondike Gold Rush era. But his passion is not only about the past and the area's rough historic charm. It’s not about developing these properties for “highest and best use” by jacking up rents and upgrading properties so that only big chain retailers can afford to move in. Bennett says he likes to bring in tenants “who are getting to build their dream” with a small business. Those dreams are bringing these old buildings back to life. “I take an old hollow skeleton of a building and bring back its soul,” he says.

That’s his answer to the greed that’s killing off a Seattle worth saving.