A closer look at three famous hoaxes that shook up the region.

We hear a lot of about fake news these days, but hoaxes, stunts and mischief have been around awhile — much of it harmless — to tease a gullible public. This time on Mossback’s Northwest, we look at times when fake news in Seattle made real news in the Northwest—and beyond.

First up is an April Fool’s classic gone wrong. In 1989, KING-TV’s comedy show, Almost Live!, gave the whole region a scare with a joke that set off a mini-panic not unlike Orson Welles’ famous “War of the Worlds” radio show.

Almost Live! flashed a fake news bulletin reporting that the Space Needle had fallen over. Even though the words “April Fools’ Day” were on the screen, many viewers took the news seriously. The city’s 911 system was overwhelmed with calls. The Needle itself received more than 700 calls from worried people. A team of doctors from Eastern Washington even offered to come over to help with the emergency. Ever since the Needle was built, people wondered about its stability — this hoax played right into that fear.

KING later said it was “perhaps the most infamous prank” in city history. Almost Live! host John Keister apologized. It was a humbling reminder of the power of TV imagery. Keister later gave advice to future pranksters: “Make sure that you do it in a way that doesn't hint that people could be dead."

In 1992, grunge was at its peak — as was publicity surrounding it. Seattle was getting national attention for its music and its youth scene. So the New York Times Style section decided to find out what the “kids” were talking about. They called Megan Jasper, then a receptionist at indie label Sub Pop Records, for the skinny on Seattle slang. A lot of Seattle folks were already tired of the hype, so Jasper, who said she was “overcaffeinated,” gave them a lexicon of BS on the spur of the moment.

“All subcultures speak in code,” the Times intoned knowingly in a glossary based on Jasper’s interview.

Hanging out: “swinging on the flippity flop.”

A loser was a “cob nobbler.”

An uncool person was a “lamestain.”

Months later, it was revealed that the lexicon was a hoax made up on the spot, a prank on the “lamestain” media. And, as for Jasper, she’s now the CEO of Sub Pop.

Seafood entrepreneur Ivar Haglund was a Seattle legend, famous for quirky marketing campaigns and publicity stunts. The folk-singing restaurateur bought the Smith Tower and flew a fish windsock on top to get attention. He used spilled syrup from a waterfront train accident to pour on pancakes in front of the news cameras. He sponsored the “Fourth of Julivar’s” fireworks displays. Ivar died in 1985, but his restaurants live on.

So Seattleites were delighted and surprised in the fall of 2009 when The Seattle Times reported that in the 1950s Ivar had once planted giant promotional billboards underwater in Elliott Bay in anticipation of a day in the future when we’d be traveling by submarine! A billboard was actually found and hauled to the surface for display. It was like finding a buried treasure from a Seattle icon — a Tut’s tomb of tomfoolery. It sounded crazy — in other words, classic Ivar. It turned out to be too good to be true.

The whole thing was a ruse, a promotional stunt to promote the restaurant chain. The Seattle Times and many readers had been taken in. The Times’ own columnist, Paul Dorpat, who has long been working on an Ivar biography, had been in on the scheme and fooled a Times reporter by confirming the billboard’s plausibility. “It was a good-hearted hoax,” he later explained.

The hoax not only fooled people, it sold a lot of clam chowder. Sales quadrupled to 83,000 cups that September.

The moral of the story: sometimes fake news pays. 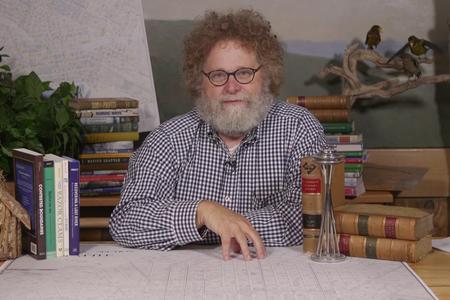 How Seattleites navigated downtown before GPS

Getting around was as easy as remembering that "Jesus Christ made Seattle under protest."

How Seattleites navigated downtown before GPS

Getting around was as easy as remembering that "Jesus Christ made Seattle under protest."