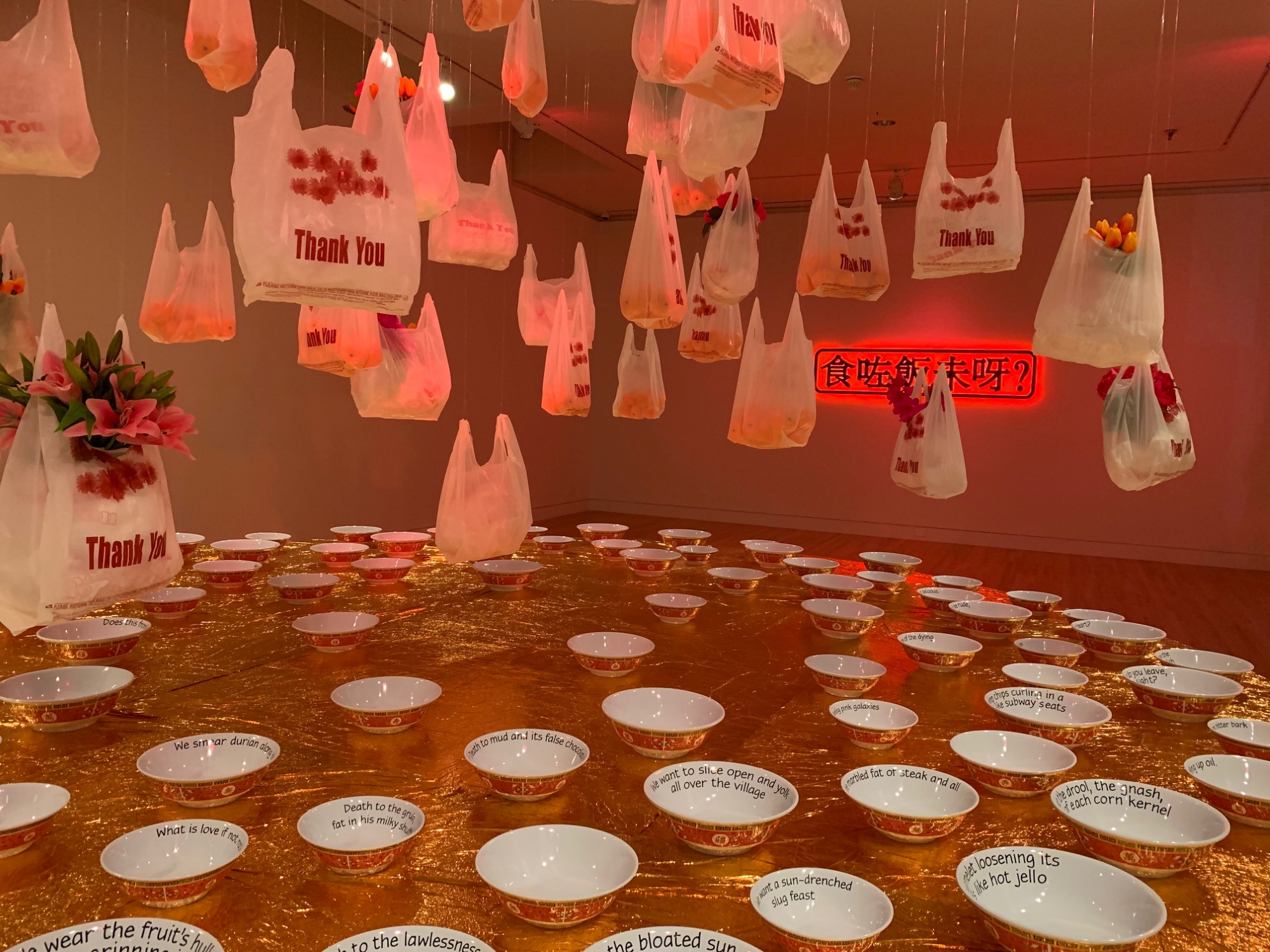 Jane Wong: After Preparing the Altar, the Ghosts Feast Feverishly

A gleaming golden table is laid out with Chinese restaurant bowls — each emblazoned with a poetic fragment (“we woke to something boiling,” “and ate that and one of your lost flip flops too”). Above it, plastic takeout bags hang like specters, some empty, some full of memories. Seattle poet Jane Wong is known for visceral writing that reflects the Asian American experience, both writ large and through her personal lens. For her first solo exhibit, she creates a similarly chewy pageant. After Preparing the Altar, the Ghosts Feast Feverishly honors her mother’s family, who experienced extreme hunger and poverty during the Great Famine, and contrasts their experience with the gluttony and abundance of her childhood, as she was raised in a Chinese restaurant in New Jersey. Through old photographs, poems, Chinese iconography and the stunning central altar, Wong makes a meaty offering of reconciliation. –B.D.

If you go: Frye Art Museum through Sept. 1. (Free)

Susan B. Anthony was a white Quaker and a dauntless crusader for racial equality and women’s rights. Frederick Douglass (the subject of a major new biography by David W. Blight) was a Black American, a former slave, brilliant orator and tireless social reformer. These two contemporaries were allies in the struggle for human equality, yet at times at odds on priorities and strategy. Mat Smart’s closely researched play explores what united and divided them, in meetings occurring over a 45-year friendship that only ended only with Douglass’s death in 1895. Through dialogue and music, the play asks, how does one join forces and make fundamental social progress? Notable Seattle actors Reginald Andre Jackson and Carol Roscoe play the “agitators,” under Valerie Curtis-Newton’s direction. –M.B.

Seattle is up to its elbows in dance this weekend, with more twisting, twirling and toe shoes than you can shake a tutu at. At Velocity Dance Center, Natascha Greenwalt with local Coriolis Dance company presents Danses des Cygnes, a feminist retelling of Swan Lake that empowers the goose instead of the gander. Pacific Northwest Ballet continues its second weekend of Themes and Variations, a mixed bill featuring two Balanchine classics and a piece by PNB soloist Price Suddarth. Whim W’him founder Olivier Wevers presents his contemporary piece, This Is Not the Little Prince, a reimagining of Antoine de Saint-Exupery’s classic story, augmented with aesthetics a la surrealist painter Rene Magritte. At On the Boards, the annual Northwest New Works festival showcases emerging and in-progress work from 12 regional artists, including Seattle’s Dakota Camacho (indigenous hip-hop theater), Arson Nicki (transgressive drag) and Jenny May Peterson (contemporary dance based on workout trends and Hollywood death scenes). Finally, the massive Seattle International Dance Festival kicks off with the always energizing Art on the Fly outdoor program in Denny Park, and continues with an impressive pageant of contemporary work by companies from Italy, Ireland, Germany, West Africa and our own Pacific Northwest. Remember to hydrate and don’t wear yourself out pirouetting through traffic. –B.D.

Northwest New Works at On the Boards, June 12-16, times and prices vary.

The Waste Land/The War in Heaven

Noted Seattle actress Mary Ewald is a master storyteller, and in this double bill directed by her husband and frequent collaborator, John Kazanjian (with whom she co-founded New City Theater), she regales us with two classics. T.S. Eliot’s five-part The Waste Land is, according to E.M. Forster, “a poem of horror. The earth is barren, the sea salt, the fertilizing thunderstorm broke too late.” First published in 1922 between two world wars, and rich in apocalyptic allusion, it can still be shiveringly resonant today. Co-written by Sam Shepard and Joseph Chaikin, The War in Heaven bears the same title as a battle between angels and Satan described in the New Testament’s Book of Revelations. Here, it is as a monologue by an angel who crashes to Earth and relates what what it means to be human. –M.B.

Tree: A show of Northwest artists

In the summertime we’ll take any excuse to ride a ferry — and here’s a particularly good one: Dawna Holloway, founder and curator of Studio e gallery in Georgetown, is guest curating a group show at the beautiful Vashon Center for the Arts. She’ll be showcasing paintings, sculpture and collage from about 20 of her regular artists, including Warren Dykeman, Paul Komada, Molly Magai, Gillian Theobald, Gabriel Stromberg and Cappy Thompson. The loose theme, Tree, in some cases translates to work featuring deep greens or arborial imagery. But Holloway says it’s more about the way trees connect with each other under the earth (according to the latest forestry science), sustaining and supporting the individual species that make up a forest. It’s a good plan for artists, too. Bonus: Extend your Vashon minivacation by hitting the Vashon Sheepdog Classic herd dog competition (June 6-9 at Misty Isle Farms), and you’ll get a full dose of art, nature and smart puppies. –B.D.

Adult sexual abuse of adolescents has been a recurring, relentless news story. What more could a play, including this well-traveled one act by Scottish dramatist David Harrower, add to such a disturbing subject? Blackbird does add something worthwhile:  an empathetic but sharply delineated psychological study of a reunion between a woman in her late 20s and a man in his mid-50s — some 15 years after their coercive liaison sent Ray to jail and Una into a tormented adulthood. When Una tracks the unsuspecting Ray down at his workplace, what does she want from the encounter? An apology? A sense of closure? Or something more nebulous and elusive? Staging Blackbird in the narrow confines of the 18th & Union storefront theater, director Paul Budraitis gives the characters maximum exposure and draws acute attention to the microshifts of aggression and need arising between victim and victimizer, accuser and penitent. Libby Barnard is a bristling, damaged Una, while Shawn Belyea uncannily captures Roy’s humane impulses and his dark ones. (Show proceeds will be donated to the King County Sexual Assault Resource Center.) –M.B.

New York City, 2008: Two families — one of the moneyed, white Wall Street variety, the other recent Cameroonian immigrants — are hit by the financial crisis. Their lives intersect inside a car, as one father is chauffeur for the other. Such is the scaffolding on which Cameroonian writer Imbolo Mbue builds her best-selling and beautifully told tale, Behold the Dreamers, which won a PEN/Faulkner Award and was an Oprah’s Book Club pick. In addition to a fresh, contemporary take on the immigrant experience, the novel offers a revealing look at marriages under the stress of ambition, across race and class. Seattleites have the unusual luck of having two chances to experience Mbue’s masterful storytelling this week: from the writer herself, when she speaks with Seattle Arts & Lectures; and in the form of a new play adapted from Behold the Dreamers by Myra Platt for Book-It Repertory Theatre. –B.D.

A compelling new documentary reveals how the once thriving Black community in Seattle’s Central District has experienced an almost complete population turnover as a result of gentrification. On the Brink is produced by University of Washington Foster School of Business professor Jeffrey Shulman (of the Seattle Growth Podcast) and enlivened by a soundtrack full of CD-based musicians, including Robbie Hill’s Family Affair, Fly Moon Royalty, Xola Malik and Draze. The film features commentary from powerful neighborhood voices, including Slick Watts, DeVon Manier, Kristi Brown and the Rev. Carl Livingston. The history lesson here is one all Seattleites would benefit from learning — not to mention the hopeful determination to do things differently lest the community’s rich legacy live on only in memory. —B.D.

If you didn’t already know, Seattle is a hotbed of comics talent (see: Fantagraphics, Ellen Forney, Peter Bagge, Jim Woodring, plus a brand new comics quarterly, Hair Flip, which debuts on June 6), here’s some irrefutable evidence: We currently have an exhibit of comics at City Hall. (In comics terms, the proper reaction here is $%$&*#!!!) And these aren’t kiddie comics either. The 14 local artists whose work is featured in Comix for All cover some pretty heavy topics, including race, relationships gone wrong and the difficulties of rolling a joint on a windy beach. Put together by the excellent Short Run (whose comix and arts festival takes place every November), the show includes a diverse range of artists, such as Eroyn Franklin, Megan Kelso, Myra Lara and Simon Hanselmann. Does having a show at City Hall mean Seattle comics have gone law-abiding? Hardly. –B.D.

CORRECTION: An earlier version of this story had an actor's name misspelled in the play Blackbird. It is Shawn Belyea. 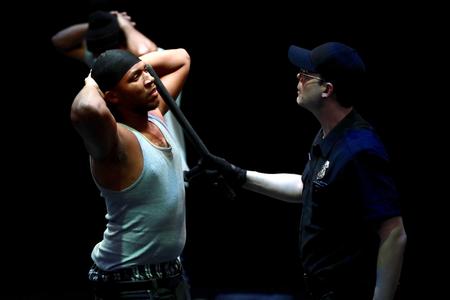