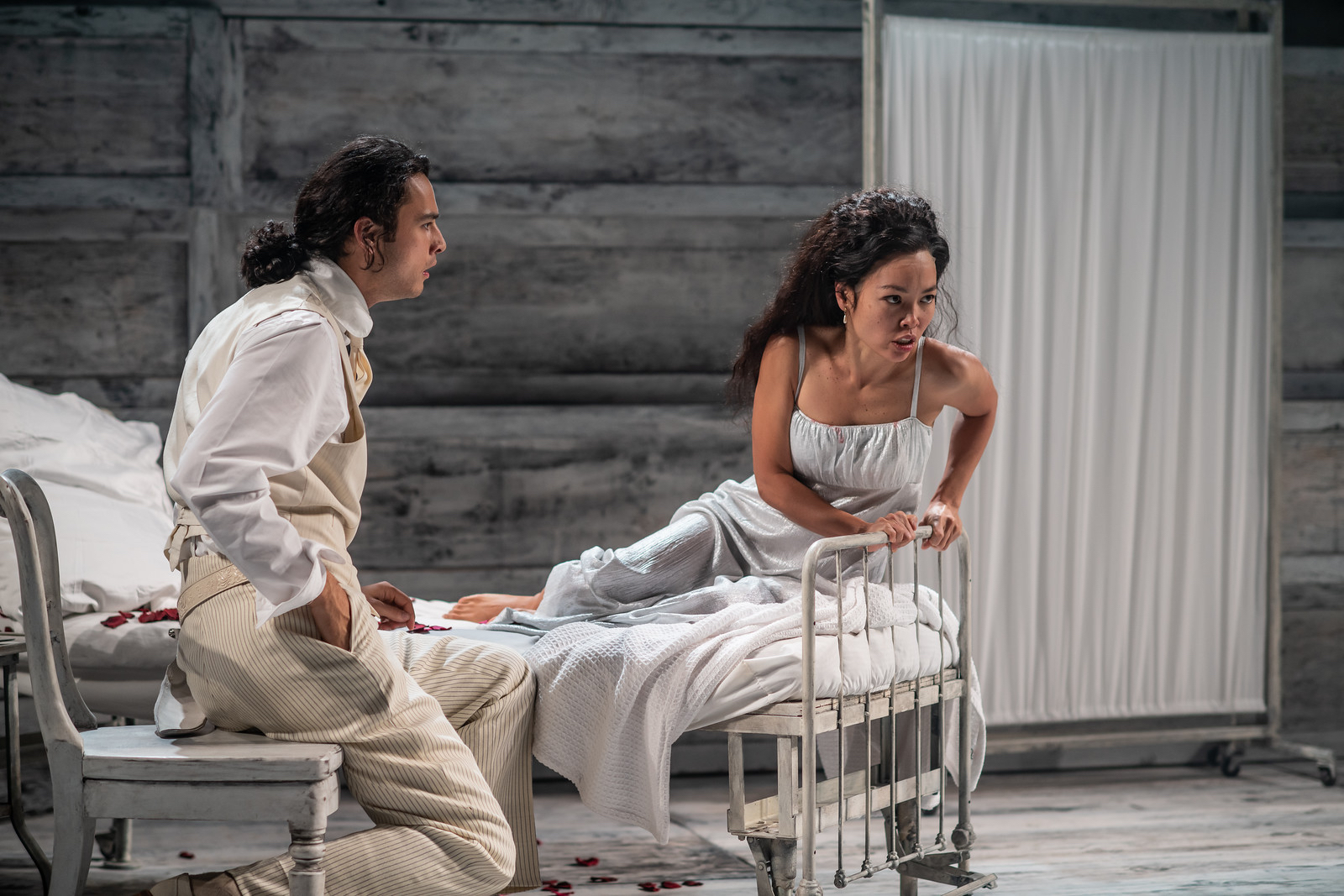 Arjun Pande as Jonathan Harker and Khanh Doan as Mina Murray in the ACT Theatre production of 'Dracula.' (Truman Buffett)

This weekend is Dia de los Muertos, which means my ancestors will come visit me from beyond for two nights in a row, starting Nov. 1. Each year, in the days leading up to this holiday, my Mexican mother decorates our altar in the tradition, with orange cempasuchil flowers, sugar skulls, conchas, pan de muerto, a bowl of salt, water and some tequila (because even ghosts like to have fun). We also bring out photos of relatives who’ve passed into the other world to encourage them to come our way. In addition to such personal family traditions, various neighborhoods and community centers are embracing Day of the Dead and welcoming death to their doorsteps.

>> At Seattle Art Museum’s annual event, you can learn how to make tissue paper flowers and skull masks, while listening to live Oaxacan music by La Banda Gozona. Also at SAM, local artist Fulgencio Lazo will create an Oaxacan-inspired art form known as a tapete, in which he “paints” huge murals made of colored sand on the floor, bringing skeletons, flora, fauna and Aztec iconography to life.

>> Lazo is busy this time of year — he also crafted a tapete at Tacoma Art Museum (which hosts its own event on Nov. 3.) and at Seattle Center, where Day of the Dead activities will take over The Armory all weekend. At the latter, attendees can place a photo of a loved one on a community altar. Workshops include how to make Grabados (a style of linocut prints popularized by Mexican illustrator Jose Guadalupe Posada), and Aztec dancer Juan Salinas will explore indigenous myths and legends.

>> El Centro de la Raza combines its Day of the Dead celebrations with civic duty, serving traditional chicken mole for free and encouraging attendants to register to vote. >> Phinney Neighborhood Association honors the dead with performances from Aztec dance group CeAtl Tonalli and traditional Mexican dances from Grupo Folklorico Citlali. >> Southenders can attend similar festivities at the Burien Community Center. But for those who prefer to stay in when the ghosts are out, rejoice; the good thing about Dia de los Muertos is anyone can set up an altar and celebrate with friendly spirits from home (like me!) –A.P.F.

If you go: Dates and times vary. See embedded links for details. All events free.

Alice Gosti: Where is home: birds of passage

Taddeo Ambrosiano. Adelina Ruggieri. Luigi Onesto. In her first solo show, Where is home: birds of passage, local choreographer and Italian immigrant Alice Gosti will wear these names — along with those of hundreds more Italians who were taken into custody, interned or displaced by the U.S. government during World War II — on her body. Her garment is a rustling dress she made by stringing together white paper tags bearing the names in scarlet. “Creating this dress was a process to combat erasure and … create a physical connection between my own history and lineage to the Italian Americans considered ‘enemy aliens’ during World War II,” Gosti says. The audience set-up — spread across different stages in four corners of the room — is meant to mimic the experience of waiting lines on Ellis Island. But of course the three-hour performance (during which people can come and go as they please) will never really come close to the sense of watchful waiting and wondering experienced by an immigrant. –M.V.S.

The Indian American community in the Pacific Northwest can be traced back some 120 years — and grew exponentially alongside the tech boom. Beyond Bollywood: Indian Americans Shape the Nation, a new exhibit at the Museum of History and Industry showcases the history and influence of the culture through archival photographs, artifacts, musical instruments and fashion. Originally produced by the Smithsonian Asian Pacific American Center, the traveling exhibit is augmented at MOHAI with artifacts and stories sourced from residents from Bellingham to Kent. From draping saris to display regional heritage (with examples from the personal collection of local sari fashion designer Swati Padmaraj Angolkar) to playing Indian classical music on a tambura (on loan from the University of Washington) to the best way to cut pistachios (a special tool is borrowed from Kent bakery Punjab Sweets), the collection makes the community traditions tangible. Watch for upcoming special events, including sari draping and storytelling on Nov. 10 and a Bollywood dance party with live music Nov. 12. –B.D.

A stage stacked high with whitewashed coffins. Men and women, decked out in shades of white. A white bed, with white sheets. And when he finally appears, our leading man is resplendent in jet black and crimson red: The bishop of blood. The prince of plasma. The count of corpuscles. Yes, it’s Dracula — in the elegant form of Brandon O’Neill, who slinks and purrs and sips his way through Bram Stoker’s horror classic, by way of Steven Dietz’s take on the tale at ACT Theatre. O’Neill is best known for excelling at major musical roles at the 5th Avenue Theatre. But with his sleek allure and hypnotic, purring voiceovers, he is the perfect blend here of brooding lost soul and ruthless monster in John Langs’ stylish staging.

In his oft-produced script, Dietz has craftily stitched together the major elements of Stoker’s vampire narrative, which on the page is conveyed through letters and diaries of several characters. Jonathan Harker (Arjun Pande) is the naïve young lawyer who comes to Transylvania to sell the fiendish count some London property, only to discover, when back home in England, that his host is sinking his fangs into such virginal damsels as Harker’s fiancée, Mina (Khanh Doan) and her BFF, Lucy (Claudine Mboligikpelani Nako).

In the novel (and most of its more faithful knockoffs), the one who saves Mina from a fate ostensibly worse than death is vampire-ologist Van Helsing. But in ACT’s current revisionist take, Dietz has erased the old scientist and given Mina double duty. She’s not just a would-be victim of Dracula, she’s also a superheroine who figures out (while swooning under his spell) how to make him not undead, but truly dead. It’s a gory job, but somebody has to do it!

This twist gives Dracula a blatant feminist slant (abetted by a red-caped and hooded chorus, a nod to The Handmaid’s Tale), and plotwise it doesn’t always make a lot of sense. But Doan is a poised, intelligent Mina who seems capable of anything. And the melodramatic tone, spooky sound design and bloody costumes and visual effects underscore that this is a fable — not a Freudian essay on female hysteria. It's not really make-you-squirm scary, but it does have the creepy factor well covered. –M.B.

An important and long-awaited new cultural center opened its doors last week: the Sea Mar Museum of Chicano/a/Latino/a Culture. Located in South Park, the collection of locally sourced artifacts, photos and two full-scale migrant worker cabins shipped from Eastern Washington draws attention to an often overlooked slice of Washington state history, which includes major Mexican American contributions in agriculture, railroad infrastructure and civil rights. The permanent collection focuses on the 1930s to the 1970s, which spans an era when farmworkers were required to use the “short-handled hoe” (forcing a stooped posture) to when that tool was made illegal (thanks to the civil rights protest movement led by farmworkers labor leader Cesar Chavez). Crosscut culture reporter Agueda Pacheco Flores was on scene at the grand opening, and wrote about how the new venue was received by members of the local Latinx community — whether they consider themselves Chicano/a, Latino/a or something else altogether. –B.D.

Walking through this show of photographs by South African photographer Zanele Muholi serves as a fascinating exercise in social behavior. As you blatantly stare at self-portraits of the visual activist (who uses gender neutral pronouns), they stare right back at you — and, unlike you, they don’t blink. This defiant game of chicken is intentional. In 76 stunning black-and-white portraits, Muholi asks viewers to consider the blackness of their skin (sometimes accented by lips painted white and enhanced post-production) to absorb the history embedded within, to not look away from our own preconceptions. In several portraits, Muholi uses day-to-day materials to create crowns, heavy neck plates, hats and hair. Cleaning products, such as scouring pads, latex gloves, clothes pins and vacuum tubes, all stand in as glamorous adornments underwritten with domestic servitude. Computer cables, pop-can pulls and bicycle tires suggest capitalism and exploitation, while cowrie shells and strawlike wigs make a point about exoticizing African bodies. This technique skates on a thin edge of amusing — it's almost funny to see the artist sporting a wooden stool as a headpiece, were it not for the historical context. Throughout it all Muholi looks straight at us with those unflinching, wide-open eyes. “Yes?” they seem to say. And also: “I see what you see when you see me.” –B.D. 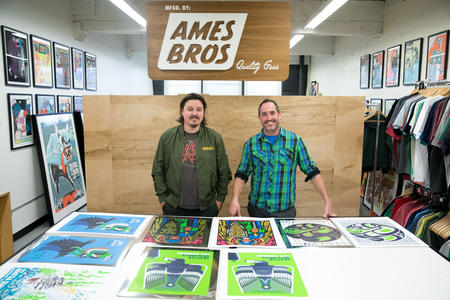