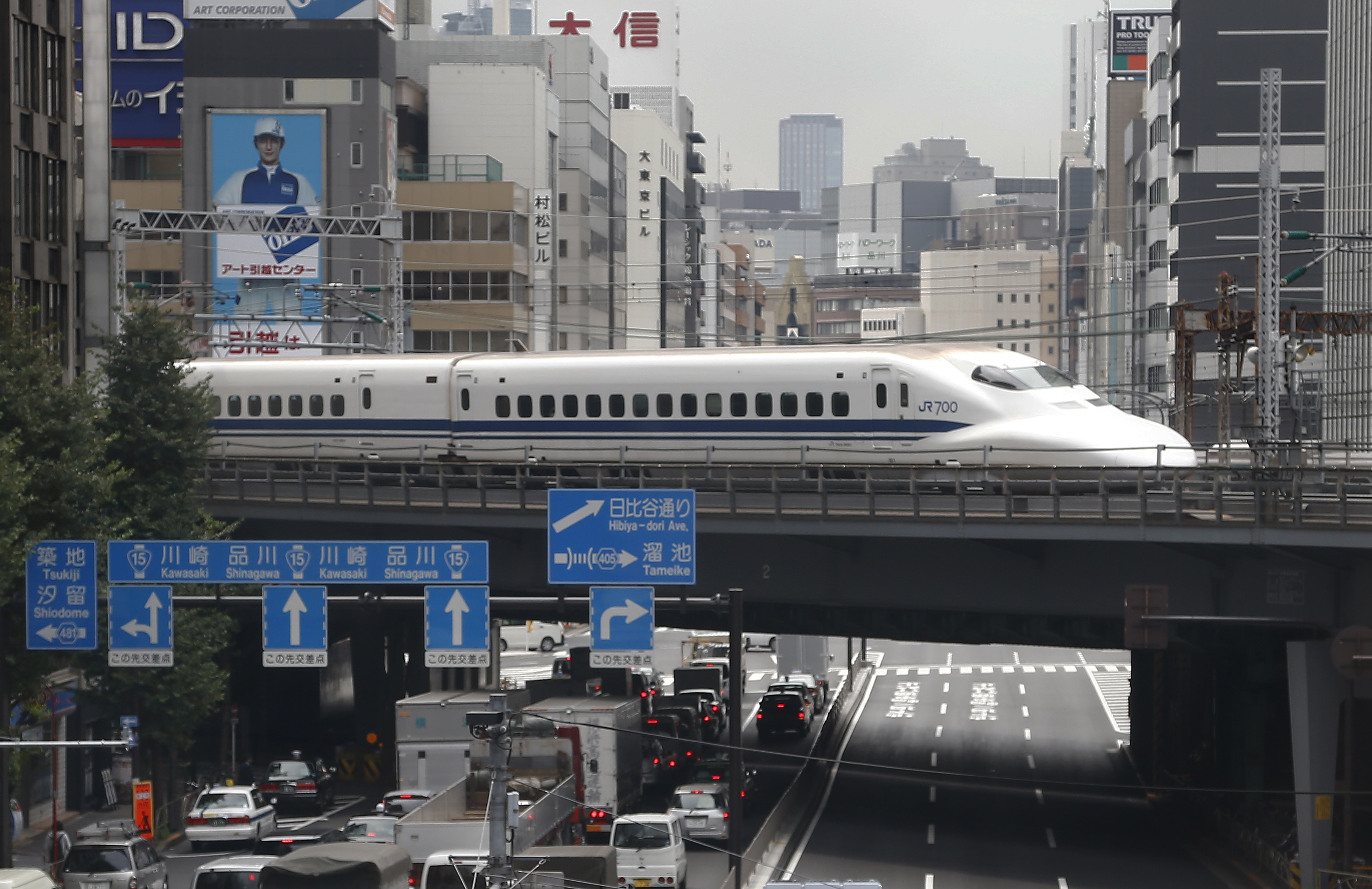 A shinkansen high-speed train runs near Shimbashi Station as it heads for Tokyo Station in 2014. High-speed rail supporters had looked to Japan's model for inspiration for a rail system across the Pacific Northwest, but with voters seeming to be in favor of Initiative 976, the future of the Cascadia High-Speed Rail may be in limbo. (Shizuo Kambayashi/AP)

Local pundits described the Pierce County electorate as “cynical about transportation funding” and “sending a message to Sound Transit,” the agency that benefits from   collecting  the highest car-tab fees in the state under a voter-approved 2016 measure to raise $54 billion for a regional transit system.

Gregoire, who now heads the CEO roundtable Challenge Seattle, was scheduled to give a keynote address the next day at the Cascadia Rail Summit, an all-day conference to begin translating a vision for high-speed rail connecting Portland, Seattle, and Vancouver, B.C., into a reality. As she brought up the hypothetical transportation megaproject, she expected a cool, if not hostile, reception from the Tacoma crowd, based on the Pierce County vote the day before.

Instead, she told Crosscut on Thursday, “It was received by cheers.”

While chastened by what would be confirmed as a win for the transportation-gutting measure, the constellation of public officials, transportation advocates and private companies — most notably Microsoft — that have united behind a vision for fast-rail service connecting the major cities of the Cascadia corridor remained optimistic, albeit realistic.

“It is a daunting day for us to think about high-speed rail when the voters just reversed something as critical as the transportation plans we had for the region,” Gregoire said during the event’s keynote address at Microsoft’s Building 92.

The timing of the one-day summit was coincidental — it had been planned months prior to election day by the Washington, D.C.-based U.S. High Speed Rail Association. The slick videos of record-breaking speeds in France, seamless service on Japan’s shinkansen bullet trains, and humorous train-vs.-plane ads from the U.K. felt somewhat out of touch, considering voters just threw a wrench into far-less ambitious transportation projects such as basic road repair, bus service and light rail.

High-speed rail boosters largely chose to view the election results as a short-term setback on the path to a much longer-term goal. “We can’t imagine this region without high-speed rail,” said Neil Peterson, a transportation consultant who ran King County Metro in the 1980s.

Roadway and airport congestion is expected to get much worse as the Cascadia region, which is projected to grow by 42%, or 3.5 million people, by 2050. Significantly expanding our highway capacity to meet that demand is a nonstarter at the state level. Roger Millar, secretary of the Washington State Department of Transportation, told Crosscut that the agency spent 75% of its capital budget on expanding roads from 2004 to 2011 and increased lane capacity only by 1%.

“Even with seven years of full-tilt energy, our economy and population are growing faster than we can build capacity in our highway system,” he said. “That has been a reality for 20 years.”

Meanwhile, the creation of a another commercial airport in the Puget Sound area, which is receiving renewed interest, would not bring with it the potential litany of benefits that a Cascadian high-speed rail corridor would: more places to live within a shorter commute distance of major job centers, downtown-to-downtown service facilitating business between the region’s three major cities and a shot in the arm for smaller cities like Centralia and Mount Vernon. These perks add up to an estimated $355 billion in economic activity weighed against an upfront construction cost ranging from $24 billion to $42 billion, according to a July business case study commissioned by WSDOT.

With numbers like that, Gregoire argued, “It’s an audacious goal but absolutely well worth the investment. If we can get the will of the people behind us, despite what happened in the election on Tuesday, we can get there from here.”

The rub is where to come up with the money. Although infrastructure has been touted as a bipartisan issue in otherwise politically polarized times, neither Congress nor President Donald Trump has made significant progress on that front. The Barack Obama administration’s $11 billion high-speed rail investment made only marginal improvements to existing Amtrak services — like the Cascades train that currently runs between Portland, Seattle, and Vancouver — rather than investing in a new dedicated right-of-way that will likely be necessary for most high-speed rail projects nationwide, including in Cascadia.

Peterson, who advised engineering firm WSP as it prepared the business case study, believes this region does not have to rely on the other Washington. “There was an underlying confidence in the business leaders I talked to that we in the region can pull this off, and we’re not necessarily dependent on Washington, D.C. but we have the capacity — the talent, resources, and ingenuity — to do it ourselves,” he said.

The confidence of regional business leaders was echoed by Gregoire, who described the reaction of Costco CEO W. Craig Jelinek at a recent Challenge Seattle meeting: “Can we just build it already?”

That sense of impatience may steer Cascadia High-Speed Rail toward a version of a public-private partnership. For example, the Italian government built track, but let private companies operate service. Intercity high-speed service in Italy has proved so profitable that U.S.-based Global Infrastructure Partners recently acquired one of the private train operators.

“We don’t have to be caught in yesterday’s way of doing business,” Gregoire told Crosscut. “We have to think about new funding models, the possibilities of a public-private partnership. We have not really done that before on transportation.”

Still, the public portion of a potential partnership was not taken for granted. Speaking in the aftershock of I-976, Gregoire in her keynote also raised the specter of the failed Forward Thrust efforts of 1968 and 1970. Emily Mannetti, economic development manager of the Downtown Seattle Association, was blunt: “Our residents demand a voice and will halt any project. The public can’t be ignored.”

To that end, Millar’s reading of the tea leaves is nuanced. “The voters said that they don’t like high car tabs,” the WSDOT secretary told Crosscut. “It isn’t about the transportation system; it’s about the revenue source.”

Millar sees a recipe for public buy-in: Keep the means to pay for Cascadia High-Speed Rail transparent. Ensure that whatever authority or agency builds it out sticks to the initial price tag no matter what. Make sure the project has statewide benefits, from rail component manufacturers in Spokane to construction jobs up and down Western Washington.

“When people are frustrated is exactly the right time to be talking about vision,” he said.

That vision can’t become reality soon enough for Alex Hudson, executive director of Transportation Choices Coalition. “There’s a real concern about how behind we are in the face of current growth and the growth that’s coming,” she told Crosscut. “We’re not going to catch up with just a bunch of local bus service.” 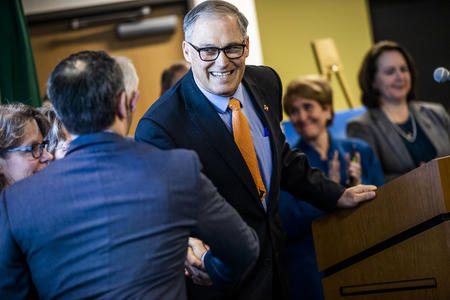