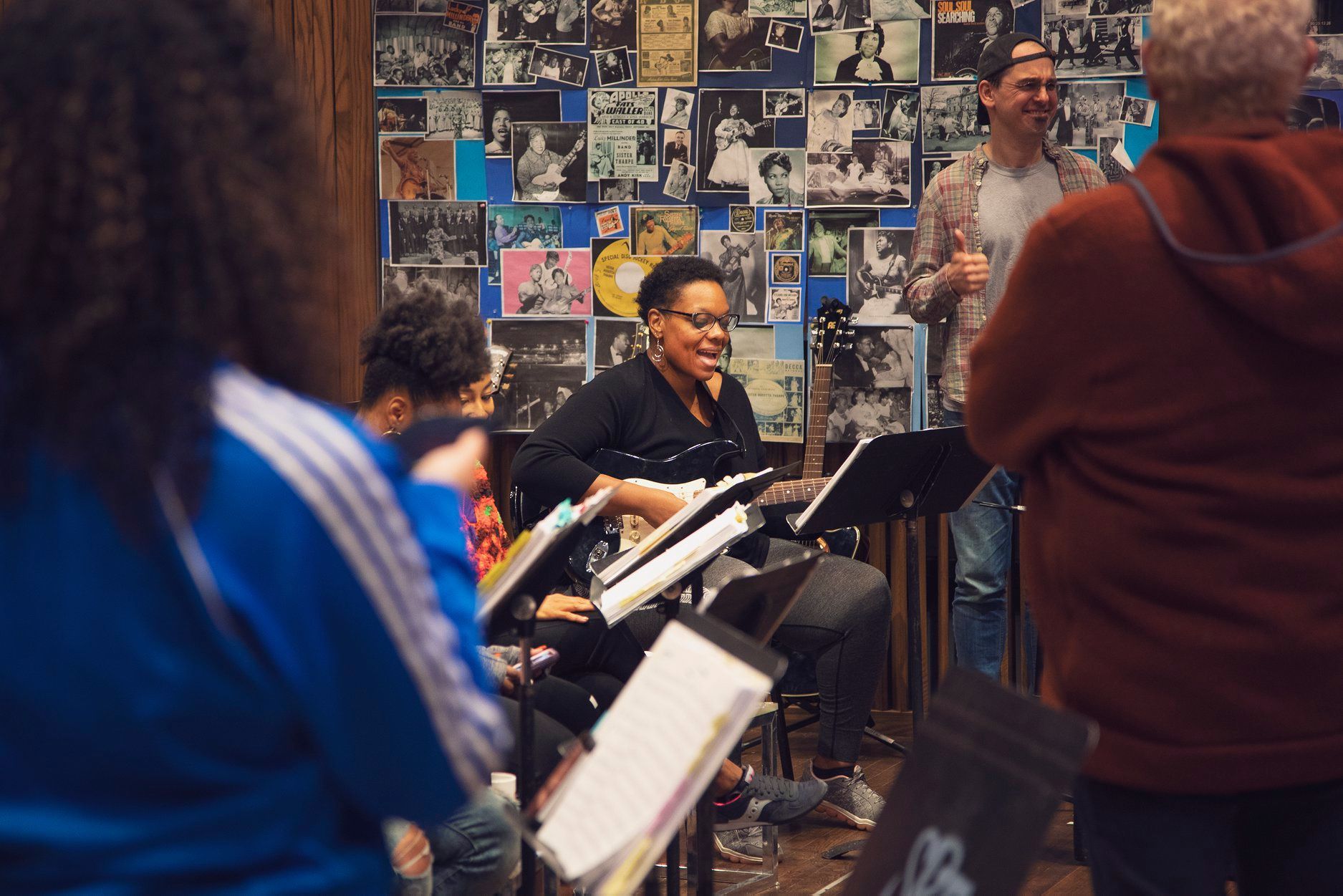 Well before Elvis Presley swiveled his hips onstage, or Jerry Lee Lewis shook, rattled and rolled, and decades before Jimi Hendrix and Keith Richards strapped on electric guitars, a vibrant Black woman with a voice that could blow the rafters off a church blazed a path to rock ’n’ roll.

Her name was Rosetta Tharpe. But if that doesn’t ring any chimes, you aren’t alone. Sister Rosetta (as she was known, in and out of church) may finally be getting her due as a thrilling singer and revolutionary instrumentalist. Tharpe (1915-1973) was enthusiastically inducted into the Rock & Roll Hall of Fame last year with a performance by Alabama Shakes singer Brittany Howard, who called her an inspiration and “one of the greatest artists of all time.”

And now Tharpe’s life and legacy will hit another stage, in Shout Sister Shout!, a new show written by leading Seattle playwright Cheryl L. West (Jar the Floor), and directed and co-created by Randy Johnson (A Night with Janis Joplin).

Will the production help spread the rollicking gospel of one of pop music’s undersung innovators?

Seattle Rep Artistic Director Braden Abraham is banking on it, as are some commercial producers investing in the show’s development. “When Cheryl brought me the idea, I was very compelled by how many great musicians were influenced by Tharpe, which I didn’t know about,” says Abraham. “I told her, let’s dig into this. So we had a workshop here, another one in London, and now we’re excited about doing the full production.”

Based loosely on Gayle Wald’s definitive, same-titled 2008 biography of Tharpe, Shout Sister Shout! profiles an artist whom Bob Dylan called “a powerful force of nature” and whom Johnny Cash named as his favorite childhood singer. Music historians consider her a “godmother” of rock ’n’ roll, and through crossover, electrified gospel hit records like “Up Above My Head” and “Strange Things Happening Every Day,” a direct musical influence on Hendrix, Little Richard and Bonnie Raitt, among others.

The show is packed with roughly 20 musical numbers, many of them gospel music favorites (e.g. “Precious Lord”) and classic blues, with a smattering written by Tharpe. Seattle musicians pepper the pit band, and Broadway veteran Carrie Compere (seen here on tour as Sofia in “The Color Purple”) stars as Tharpe.

Shout Sister Shout! is an ongoing passion project for West. After co-creator Johnson secured the rights to Wald’s book, West leaped at the chance to write the script. “I’m always interested in people who are the first to do something, and the courage that takes,” she says.  “And for me there’s a duality about Rosetta. She’d come out onstage in these proper little flowered gowns, but she was like someone who lifted barbells for a living. She was religious but could be bawdy. She drank a little. She had joy in life, but struggled to sustain close relationships.”

An earlier version of Shout Sister Shout! premiered at the Pasadena Playhouse near Los Angeles  in 2017, winning raves for the music, but some criticism that the script fell short.

West calls this new version “a significant, from-Page-1 rewrite.” Chatting between rehearsals in the Seattle Rep’s empty lobby, she speaks of wanting to capture not only the musical dynamism, but also the pioneering artistry and personal struggles of Tharpe, who grew up in the [Pentecostal] church, where her mother was a musician and evangelist. “Rosetta began singing with her when she was 4 years old,” West says.

The subject is a natural for West, an outgoing Illinois native raised in the black Baptist church, who listens to gospel music while writing. She has made other forays into black musical history — in such musicals as Broadway’s Play On! and Pullman Porter Blues, which respectively unfold against the sounds of Harlem Renaissance jazz and Chicago blues. (Seattle Rep has presented both shows, as well as nonmusical dramas by West.)

The playwright first learned of Tharpe’s saga — fame and musical daring in the 1930s and ’40s, followed by relative obscurity later in life — via Wald’s biography. And Wald, a professor of American studies at George Washington University, first came under Tharpe’s spell while watching a recording of a soul-stirring performance. Tharpe’s inventive guitar playing and ability to enthrall a broad audience were undeniable.

“I was immediately struck by not only her charisma and talent, but by the fact that she wasn’t a household name,” the biographer recalls by phone. “I wondered, why has this person been forgotten by history? ... There was a story to tell about her, about her world, and the world that didn’t fully appreciate her.”

Piecing that story together was difficult. Tharpe left no helpful paper trail of letters and interviews. But Wald says she was “lucky to start the project when some of the people who knew her well were still around.”

A portrait emerged of a devout, gutsy woman with little education but innate musical ability and moxie. Born Rosetta Nubin in Cotton Plant, Arkansas, she was largely raised by her preacher-musician mother, in a denomination (Church of God in Christ) that expanded the traditional religious musical palette to include drums, horns and stringed instruments.

Celebrated in childhood as a "singing and guitar-playing miracle,” Rosetta toured the evangelical circuit with her mother and, after they moved to Chicago, absorbed the sounds of urban blues and jazz. She perfected a rollicking, muscular style of string plucking all her own, turning classic gospel tunes like “Didn’t It Rain” into stomping, swinging rave-ups. She first accompanied herself on acoustic guitar, but then took up state-of-the-art electric models from Gibson.

Tharpe was likely the first prominent woman instrumentalist to plug in and rock out. By her 20s she was recording popular gospel discs, and doing gigs at secular venues (Carnegie Hall, Harlem’s Cotton Club), as well as at churches. West notes she also was one of the first black musicians to have a sleep-on tour bus, when the South banned her from whites-only hotels.

Musically, Tharpe ventured beyond gospel into jazz, country twang and even ribald blues (“I Want a Tall Skinny Papa”), which may have brought her new devotees, but alienated some religious fans. It’s a schism West explores in Shout Sister Shout! Her script also touches on Tharpe’s (likely) amorous affair with a female protégé and collaborator, Marie Knight. “At the time that could get you locked up, and attacked,” says West. “Rosetta was private about it, but it’s not like her fellow musicians didn’t know.”

In the 1960s, after her fame had waned and her renown as a gospel goddess was surpassed by Mahalia Jackson and others, Tharpe enjoyed a new surge of popularity — this time in England, with young rock musicians and other devotees of African American roots music. She toured in Europe, and headlined at the London Palladium in 1964. But diabetes-related health problems and a stroke led to her death at the young age of 58 in 1973.

Now, on a Seattle stage, West hopes the divine Sister Rosetta’s robust musical spirit will rise up to thrill listeners once again. 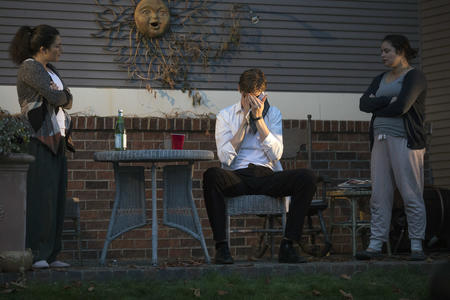 A whole host of Latinx productions helmed by Latinx actors, take the stage. 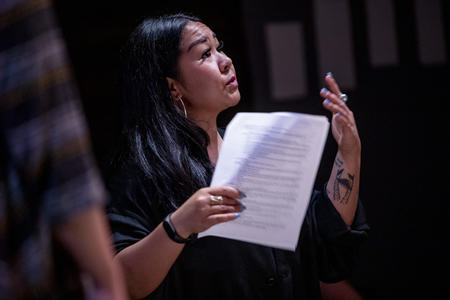 The actor-singer-director has a new play at Seattle's Café Nordo.

by / August 1 /
Article continues below

A whole host of Latinx productions helmed by Latinx actors, take the stage.

The actor-singer-director has a new play at Seattle's Café Nordo.