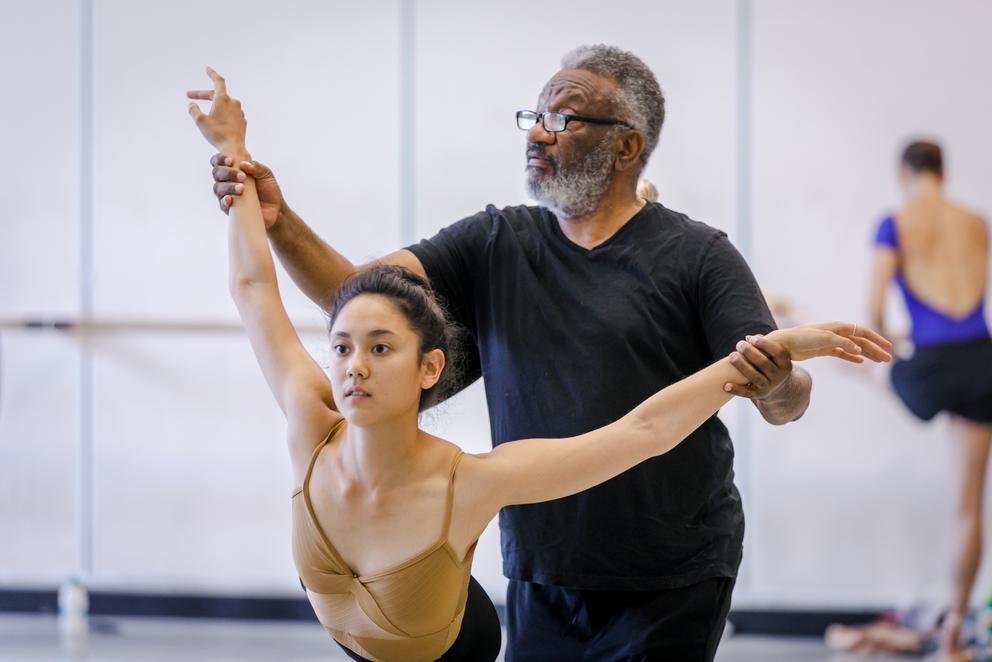 “Let’s experiment,” says choreographer Miles Pertl. In rehearsal at Pacific Northwest Ballet, he leads a group of nine dancers through a mix of galloping, crawling and log-rolling that coalesces into a human version of a jellyfish propelling itself through the water. Later, he asks them to fall flat on the ground and then turn around by hopping on their butts.

None of this is familiar material for the performers in the room, but they dive in and eventually approximate what Pertl is asking for. Although he’s trained in ballet, he’s using very little of that tradition. Instead, he designs movement the way early modern dancers did, crafting it on their own bodies.

Pertl is part of Pacific Northwest Ballet’s upcoming Locally Sourced program, featuring three world premieres by three local choreographers, each at a different point in their career as a dance maker. In addition to Pertl, the mixed bill includes Eva Stone, who this year inaugurated a groundbreaking choreography class for young women at PNB School, and Donald Byrd, a dance maker whose resume is so rich he’s currently the subject of a retrospective at the Frye Art Museum.

As experience goes, Pertl, at 29, is the “baby” of the group, and in many ways has set himself the hardest task. He’s still a member of PNB, dancing in the corps de ballet. Though he’s made work for several other groups, this is the first time he’s stood at the front of the room and told his colleagues what to do. And the things he’s telling them are often far away from their daily practice. Bouncing and sliding is very different than the sleek virtuosity of neoclassical ballet.

When Artistic Director Peter Boal approached Pertl about making a work for this program, the choreographer took the “local” aspect of the title literally. Called “A Wash of Gray,” his piece is designed as a tribute to the fundamental things about Seattle that we all value, even during these changeable days. He also convened a varied collection of Pacific Northwest artists as collaborators.

His first step was to recruit his sister, visual artist Sydney Pertl. The two of them dove in, combining local history (like the stories told on the Underground Tour) with imagery from the natural world (such as a jellyfish). Along with a score by Jherek Bischoff (blending local “found sound” with Bischoff’s compositions), the piece includes projections by visual artists Eli Lara and Max Badger Woodring that give us a time-lapse view of the creation. Add in some other technical tricks (including water effects) and a pop-up art gallery in the lobby curated by the siblings, and Pertl is beginning to think as much like a project manager as a choreographer.

Eva Stone began making dances before she started dancing herself. Her obsession with choreography began in high school, and has continued through 30-plus years of making work for myriad artists, from her own Stone Dance Collective to groups around the country. This unusual trajectory has meant that while her movement can vary widely, depending on the dancers, the structures she employs are fundamental to the way she looks at dance.

Although Stone demonstrates some movement during rehearsal, she’s not really looking to make the dancers mimic her — she’s sketching a framework that they will flesh out and inhabit. The style she’s bringing out in the dancers is fluid, with contrasting dynamics — as one performer walks calmly downstage, the rest of the women swirl around her, weaving in and out like a long braid.

Her piece for Locally Sourced is “F O I L” — as in a challenge or nemesis. The commission is a big step forward for her on several fronts, not the least of which is the general dearth of female choreographers working with large ballet companies. Stone has been teaching a dance composition class to young women in the PNB School, encouraging them to think creatively inside their classical training and to consider choreography as a real possibility for those who continue in the profession. It’s not a coincidence that “F O I L” is set to a score by five female composers, and its opening sections are all danced by women. 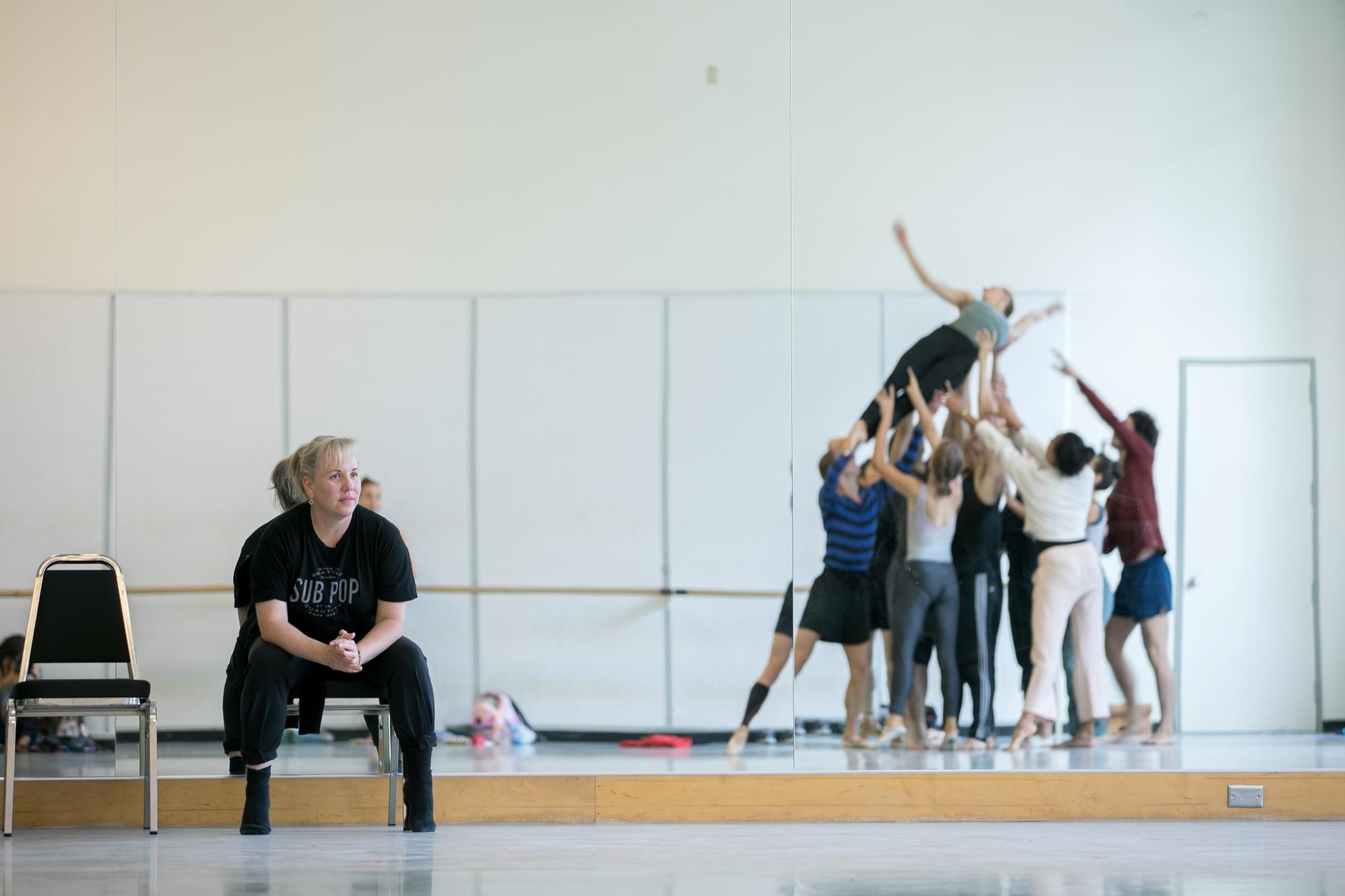 Indeed, the entire creative team, including costume and lighting design, are women. Stone is thrilled with the opportunity to make a work of this size for the company. After many projects where she had to pull back some of her ideas to match the budget or the skill set of the group involved, she talks about this dance as if it's a house she gets to decorate in full. “I have chandeliers,” she says, speaking literally. “I have all the chandeliers in the world!”

Donald Byrd brings the longest history to the project, and is making his contribution, “Love and Loss,” in the middle of a very full schedule. Locally, he’s the artistic director of Spectrum Dance Theater and has created a series of powerful and challenging works for the company, combining serious technical skills with highly charged subject matter.

Recent dances have focused on lynching and gun violence. Even his more romantic works make a substantial impact on the audience. Byrd’s choreography incites a visceral response to the subject matter and to the physicality of the performers; our heart rate rises with theirs. The score for “Love and Loss,” by Israeli composer Emmanuel Witzthum, comes by its title honestly as it is based on personal tragedy, and Byrd is drawn to that emotional intensity. The movement reflects that heightened sensibility through complex phrases performed at peak tension — when a walk that changes direction becomes a race through a battlefield.

Nationally, Byrd has made dances for a number of companies, worked on Broadway, and served with multiple arts organizations where his perspective as a Black choreographer working in what is still a primarily white-run art form has helped jump-start some of the profession’s more recent self-examination.

He’s fresh back from New York City, where he created a new work for the Alvin Ailey company (which might be on the program when the group comes through Seattle in April). And he is the subject of a career retrospective exhibit at the Frye Art Museum that illustrates his personal trajectory from the 1970s to today. The photos and videos are boosted by live performances by Spectrum dancers in the gallery several times a week.  Byrd is certainly having a year of it — including a major award from the Doris Duke Foundation — and this new dance for PNB is part of that cavalcade.

In his home studio at the Madrona Dance Center, Byrd creates the material for this new work with the Spectrum dancers, giving them short movement phrases and telling them to extend and develop them using certain guidelines — running things back to front, for example, shifting body parts (so that the arms do what the legs were doing), or reordering the elements.

In Byrd’s hands, this post-modern choreographic tool kit serves his dramatic interests. He works out the material on his own dancers, who then teach it to the performers at PNB, while Byrd coaches and shapes the final version. In “Love and Loss,” Byrd certainly makes use of what ballet dancers can do, but as with the other choreographers on the program, he’s asking these artists to work on the edge of their usual practice. The amplitude of ballet is still there — the sense of physical virtuosity — but the intensity of the dynamics are turned way up. The breathtaking snatches away even more oxygen.

In choosing these three artists Peter Boal was working as much from serendipity as anything else. The choreographers are indeed local, and it’s no surprise that they are connected to each other as well as to the art form. Stone teaches choreography at Spectrum’s school, and was an early mentor to Pertl when he was still a young dancer trying to understand the larger dance world.

They don’t really share a common aesthetic so much as they reflect one of the directions that contemporary ballet is taking as it develops, absorbing influences from modern dance. Each artist brings their own point of view about dance to their work in the studio — what it is and how you make it — and by extension they show it to us, as we sit in the audience and see what they’ve made. 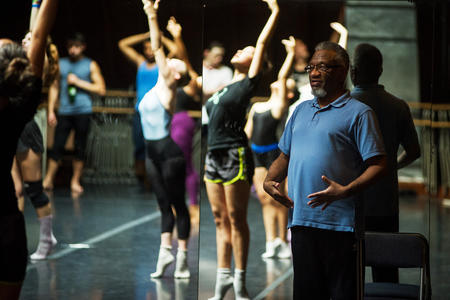 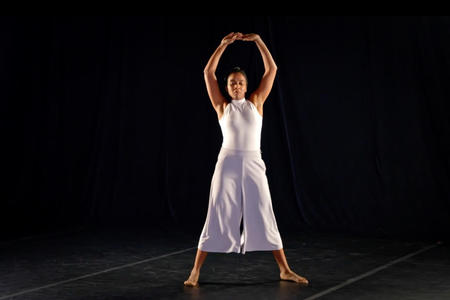 Vancouver’s Expo ’86 was the last time North America hosted a world’s fair. Here’s what made it a golden moment.