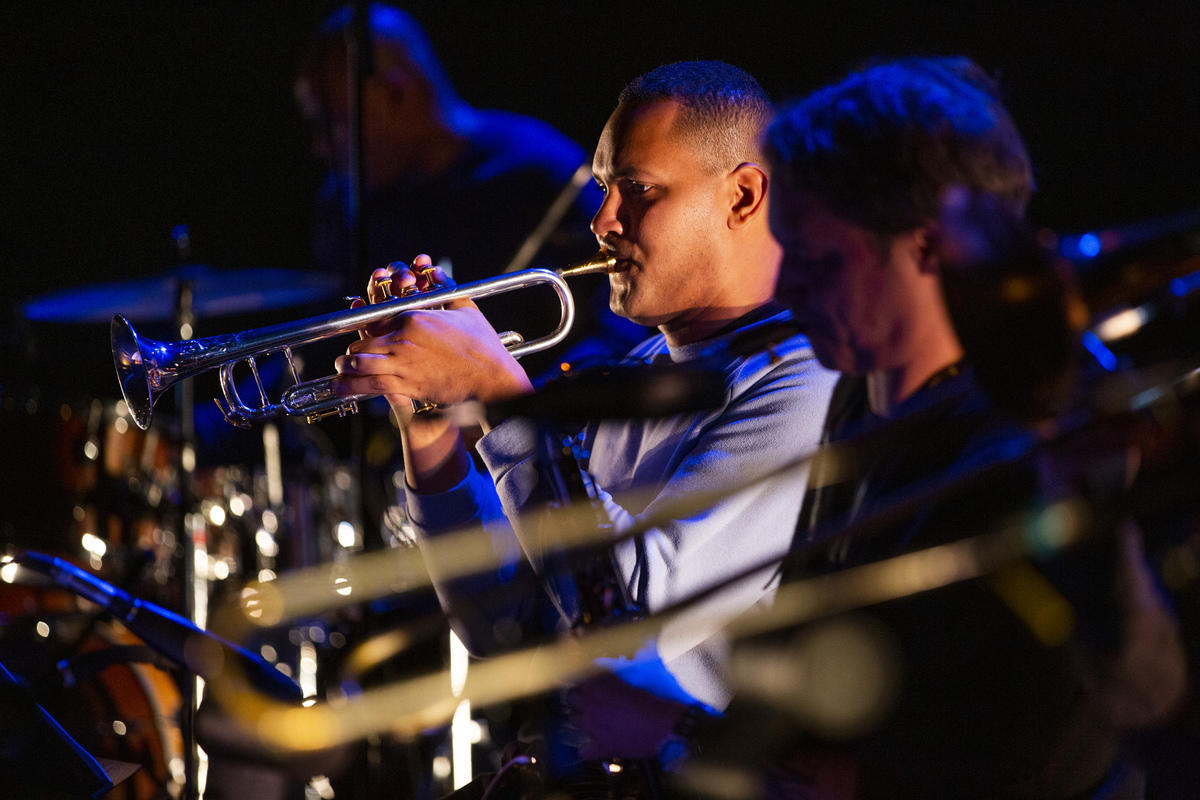 Ahamefule J. Oluo plays the trumpet during the rehearsal of "Susan" at On The Boards. (Lindsey Wasson for Crosscut)

Some people, when life gives them lemons, don’t make lemonade. They make cocktails and throw a party.

Susan Oluo is one of them. As a single mother bringing up two children in Seattle in the ’80s, when money was tight — and it always was — she tucked her children, Ijeoma and Ahamefule, into the car to try and find the end of a rainbow glinting through the clouds, or chase the source of a klieg light beaming across the night sky.

“I really wanted them to have a positive history,” she says. “I didn’t want [the circumstances] to be real. Because real was pretty bad sometimes.”

Once, when her income tax return yielded some rare extra cash, Susan bought Ahamefule a superbly shiny, second-hand King Silver Flair trumpet from a neighbor in their Section 8 housing complex in Lynnwood.

Decades on, Ahamefule J. Oluo is a celebrated Seattle trumpet player (notably with the band Industrial Revelation), composer, storyteller and comedian. He still plays the Flair, though it’s not his “main horn” anymore.

All four performances of Susan, Dec. 5 - 8 at On The Boards are sold out, but some tickets will be available at the door night-of. Performances in New York and Maryland are scheduled for January and February.

His new show, Susan — you guessed it — revolves around his mother, whom he describes as “the most comically optimistic person on earth.”

In Susan, Ahamefule traces how “a white lady from Wichita” fell in love with a Nigerian chief pursuing his doctorate in the U.S., married him, had two kids (Ijeoma and Ahamefule) with him — and subsequently became a single mom when her husband did not return from a “vacation” in his home country. The show is about growing up poor, parenthood and the failings of men. About what it's like to be Black in Seattle, then travel back to your ancestral village and feel white in Nigeria.

The show (at On The Boards Dec. 5 to 8) is a follow-up to Ahamefule’s 2016 off-Broadway jazz-memoir experiment Now I’m Fine, in which he chronicled the worst six months of his life, wherein he got divorced, dropped out of school, contracted a bizarre skin disease and learned that the father he’d always longed to know had passed away.

Ideally, Susan would have premiered closer to the breakout success of Now I’m Fine, but Ahamefule got, as he puts it, “sidetracked” by writing and working on Thin Skin, a feature film (directed by The Stranger writer and local director Charles Mudede) loosely based on Now I’m Fine, slated for release next year.

Though more of a companion piece than a sequel, Susan will debut at On The Boards in Seattle and have its New York premiere at the Public Theater during the Under The Radar festival. The four-night run is already sold out (there will be some tickets at the door the evening of a performance).

Much of Susan’s pedigree is similar to Now I’m Fine’s. It is also co-written with Ahamefule’s wife, writer Lindy West, and similarly blends Ahamefule’s personal history with comedic and live jazz interludes, the latter performed by an orchestra live on stage.

But things will be plenty different this time: the 17-strong orchestra has been pared back to seven musicians (including one extra vocalist), and Ahamefule has swapped his bow tie for more casual wear. Most importantly: While his father’s absence looms large in Now I’m Fine, this time around, the show’s subject is still a very presence in his life.

“We’re very close,” Ahamefule says, giving his feet a rest in the (literally) green room at On The Boards a few nights before the show’s premiere. On the sofa next to him sits Susan, her gray hair tinged somewhat purple, a twinkle in her eye whenever she looks at her son. 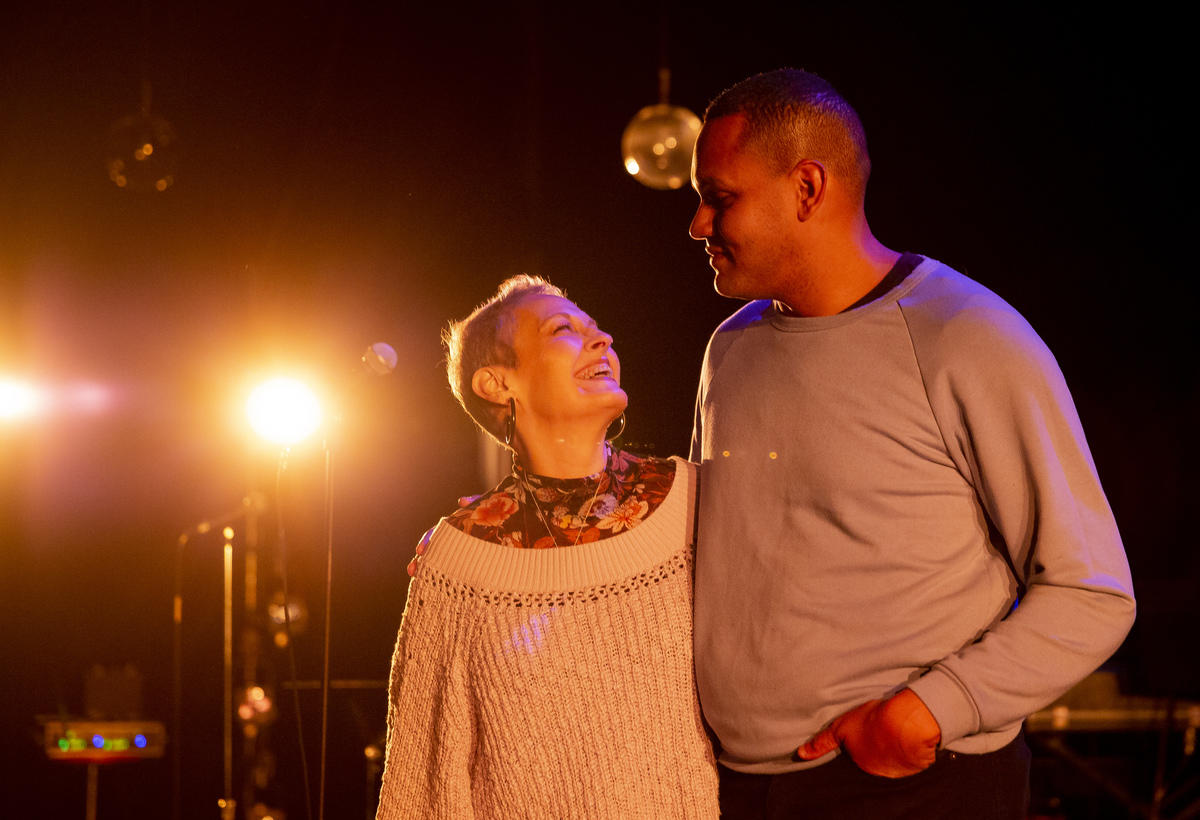 Even so, Ahamefule did not prepare his mother for the fact he was planning to make a show laying bare the ups and downs of her life. Once he had the idea for the show, he started filling out grant applications.

“And then I got that big [Creative Capital] grant and all this funding,” Ahamefule says. “So when I talked to my mom about it, I already had a contractual obligation.” At which point mother and son both burst into laughter.

That her son will soon start traveling the country telling her life story doesn’t trouble Susan. “Him doing stand-up has prepared me,” she says of her son. “My oldest one [writer Ijeoma Oluo, of So You Want to Talk About Race] writes as well; they’ve both written about me. That kind of breaks you in, to the point where you think: ‘OK, this is their art. I’m honored to be a part of it.’ ”

Susan being a part of his work was precisely the point for Ahamefule: he’d already made a show spotlighting his absent father. There’s no shortage of shows and stories about absent dads, he remembers thinking. “In terms of the stories that we tell, we tend to glorify and focus on the stories where men do damage,” he says.

What about the stories of women picking up the pieces? What about the tales of what comes after abandonment, the lemonade and the cocktails made with lemons, the rainbows chased, the comedy of life even when things are terrible?

It’s not an overstatement to say the family’s M.O. is to find jest in the bleakness. Even when describing how poor, exactly, their family was, Susan and Ahamefule both find a way to chuckle.

“Fun had a disproportionately high priority in my childhood,” Ahamefule remembers. He later turns to his mother, and says: “I don’t remember you ever being in a bad mood.” And: “I’ve never heard you say a hateful thing about any person, ever.”

“Well, you were in bed,” Susan retorts.

Ahamefule launches into a boisterous laughter.

It’s a perfect illustration of the point he makes just a couple minutes later: Laughter, he says, is beautiful because it’s an involuntary response — even when you’re not feeling grand.

“You don’t necessarily get to choose to laugh,” Ahamefule says. “Laughter snaps you out of it whether you want it or not. It says: ‘OK, you’re going to have a good time for a couple of seconds right now, no matter what else is going on.’ That’s such a beautiful thing: that even when our body doesn’t want to feel good, there’s this flip that could get switched — and you feel good even if it’s just for a moment.”

Susan, looking up to her son sitting on a higher chair, nods.

“That’s one of the reasons why laughter comes out of tragedy so much,” Ahamefule continues. “Just because it’s really necessary in moments where things feel so dark. It’s like you have that mechanism to save you.” 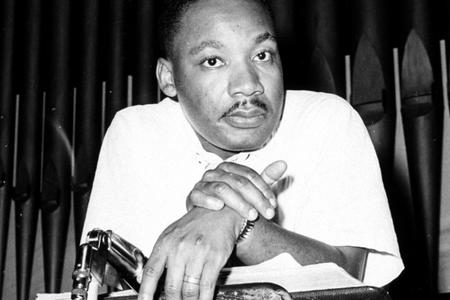