Jazz goes to the opera to honor Charlie Parker in ‘Yardbird’ 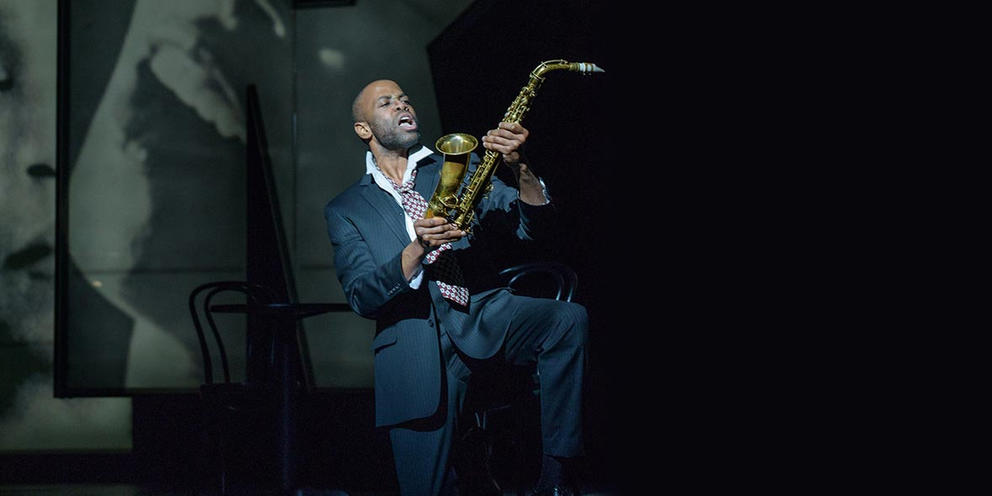 Back in the 1940s, legendary saxophonist Charlie Parker had a long-held dream of merging jazz elements with those of chamber music (e.g., string quartets and the like). He got his wish in 1949-50, when he recorded a pair of commercially successful albums called Charlie Parker With Strings.

The idea was not to plunk Parker’s bracing, complicated sax soloing experiments into a plush, sweetened setting, but to synthesize jazz and classical worlds into something altogether new.

Something akin to that challenge goes on in Charlie Parker’s Yardbird, a 2015 opera making its Seattle debut this month by way of a promising, dynamic production at Seattle Opera. As with Charlie Parker With Strings, this stage-set innovation is perhaps best understood by what it isn’t, as much as what it is.

Yardbird is not a musical tribute to the Kansas City native who worked hard from a tender age to find something new in jazz, breaking taboos around scales, interpolation in melodies and vigorous improvisation. Yardbird is also not musical theater or an awkward effort to make a classical orchestra sound like a bebop quintet.

Yardbird is, in fact, a one-act opera in which — as its Swiss American composer, Daniel Schnyder, is quick to point out — there isn’t even a peep from a saxophone until the score’s second half.

“It’s a challenge writing an opera score about jazz,” says Schnyder. “You have to reflect the music of Charlie Parker, but you can’t just duplicate it in a classical orchestra. The vernacular of jazz when played that way can sound corny or wrong,” he continues. “You have to capture the essence of Parker’s music, but then distill it and plant it in a classical setting.” What you gain, he says, is “a special energy from different sources and ideas coming together, creating something that reflects African American music history.”

Of course, all of that might be moot for the scores of people who say they hate jazz (especially bebop) and classical music (especially opera). Sure, naysayers can skip Yardbird and stay home. But is there something unique about this jazz-opera odyssey that could attract even the haters?

“It’s an American story, reflecting American history and culture,” says Schnyder. “It’s things that are known to Americans that we can relate to from our own lives. That’s very different from operas about distant historical figures, like Caesar, who are less easy to relate to. It’s fast-paced. Even people who hate jazz and opera will not fall asleep in Yardbird.”

Yardbird begins with Parker’s untimely death in 1955, at 34 years old. His ghost surveys the landmarks of his life, from artistic rise and jazz-world success to his opioid addiction and bouts with mental illness. Key relationships with his mother, Addie Parker, as well as with his wives and kindred spirit (and collaborator), trumpeter Dizzy Gillespie, also drive the story.

But aside from Gillespie, the opera doesn’t contrive to present a who’s who of Parker’s jazz contemporaries.

“It would be awkward to have an opera with jazz giants Thelonius Monk and Max Roach singing,” Schnyder says.

The composer credits African American playwright-turned-librettist Bridgette A. Wimberly (of 2001’s off-Broadway St. Lucy’s Eyes, starring Ruby Dee) for finding the heart of the story in experiences that Schnyder, a white immigrant to the U.S., did not readily know.

Schnyder had worked with Wimberly’s musician brother, Michael Wimberly, on several concerts involving music from the Republic of Mali. When Schnyder mentioned to his colleague the in-development Parker opera commissioned by Opera Philadelphia, Wimberly told him about his dramatist sister. After a conversation with Bridgette Wimberly, Schnyder recommended her to write the libretto.

“I had heard about Charlie Parker all my life,” she says. “My uncle was a saxophonist who idolized Charlie, to the point where he got on heroin. They were both born on August 29th. Though my uncle was 14 years younger, every time Charlie came to Cleveland, they would get together,” Wimberly says. “My grandmother and mother hated Charlie. [But when] my uncle passed away, we could never talk about him without talking about Charlie Parker.”

Despite that family history, Wimberly wanted to write about Parker, and “really find out who he was beyond the stories I heard as a child,” she says. “I found his mother in a book of interviews after his death. It was her pain that made me understand who Charlie was. He was her whole life. And there were the wives and his patron, Baroness Pannonica de Koenigswarter, whose apartment he died in. So I knew the story revolved around women.”

“As the composer, I was looking at the story from a musical standpoint,” says Schnyder. “Bridgette wisely focused on the women in Parker’s life. You can show a lot of emotion that way, and also aspects of the hard life of an African American musician in the first half of the 20th century.”

“Because [Yardbird] is about a real person, you approach it with added insight,” says tenor Joshua Stewart, who will play Parker on opening night and then in performances alternating with Frederick Ballentine in the lead.

“Parker’s story is relatable. It’s about the struggle of a Black man in America. I feel very close to this guy,” Stewart continues. “I understand the amount of work it takes to achieve a goal. Most people who set their minds on achieving something understand that.”

Stewart also played Parker during previous runs of Yardbird, in Atlanta and Phoenix. Later this year, he’ll be in his hometown of New Orleans to play Parker again. He’s had ample time to reflect on the technical challenges of singing Schnyder’s demanding score.

“It’s one of the most difficult operas for the tenor voice,” Stewart says. “It was written for Lawrence Brownlee, an incredible technician vocally.” Brownlee, a luminary on international opera stages and frequent, beloved star of Seattle Opera productions (Don Giovanni, 2014; Count Ory, 2016), is best known for his dexterous precision and tonal beauty.

“So the piece, like Parker’s music, is full of extremes, pushing the voice’s boundaries,” Stewart says. “When you have a piece this difficult, you have to bring to it everything you have to offer. You have to go on the full journey.”

Soprano Angela Brown has played Addie Parker in every U. S. production of Yardbird since its 2015 Philadelphia premiere. “Schnyder is a saxophonist, and he really puts you through your paces,” she says of the piece’s complexity. “It’s a gorgeous score, but it’s rough. It goes from the top of everyone’s ranges to the bottom, just like a bebop saxophone. Fast and florid.”

In addition to the vocal gymnastics, audiences of the Seattle production of Yardbird will be privy to a sequence not part of any other city’s version since Philadelphia. Director Ron Daniels (who directed the Opera Philadelphia world premiere and is making his Seattle Opera debut) has reinstated the scene for added emotional and psychological richness. In it, Parker, realizing he is meant to be a disruptive and original force in jazz, experiences a profound sense of mission that must be accomplished, whatever the cost.

“Once you’re aware that what you’re trying to do is different, you have to constantly work against the grain, swim upstream,” says Stewart. “Once Parker understood what the stream was, he could then change the rules, make new rules.”

It is that kind of epiphany that excites Seattle Opera scholar-in-residence Naomi André, author of Black Opera: History, Power, Engagement. An expert on the traditional opera canon, and an inspiring, upbeat proponent of diversification at every level in opera companies, André stresses that bringing different viewpoints to stories is the most effective, inclusive and human way to diversify the arts.

“I want us to think about, what are Black vantage points telling us today? Latinx? Asian?” she prompts. “And then having the wonderful experience of going to an opera house and seeing a new type of story. It’s nice to see a bunch of things happening.”

But that doesn’t mean André wants to ditch the classics. “Don’t get me wrong. I wrote my dissertation on Verdi and can’t get enough of those works,” she says. “I just think we can tell lots of stories.”