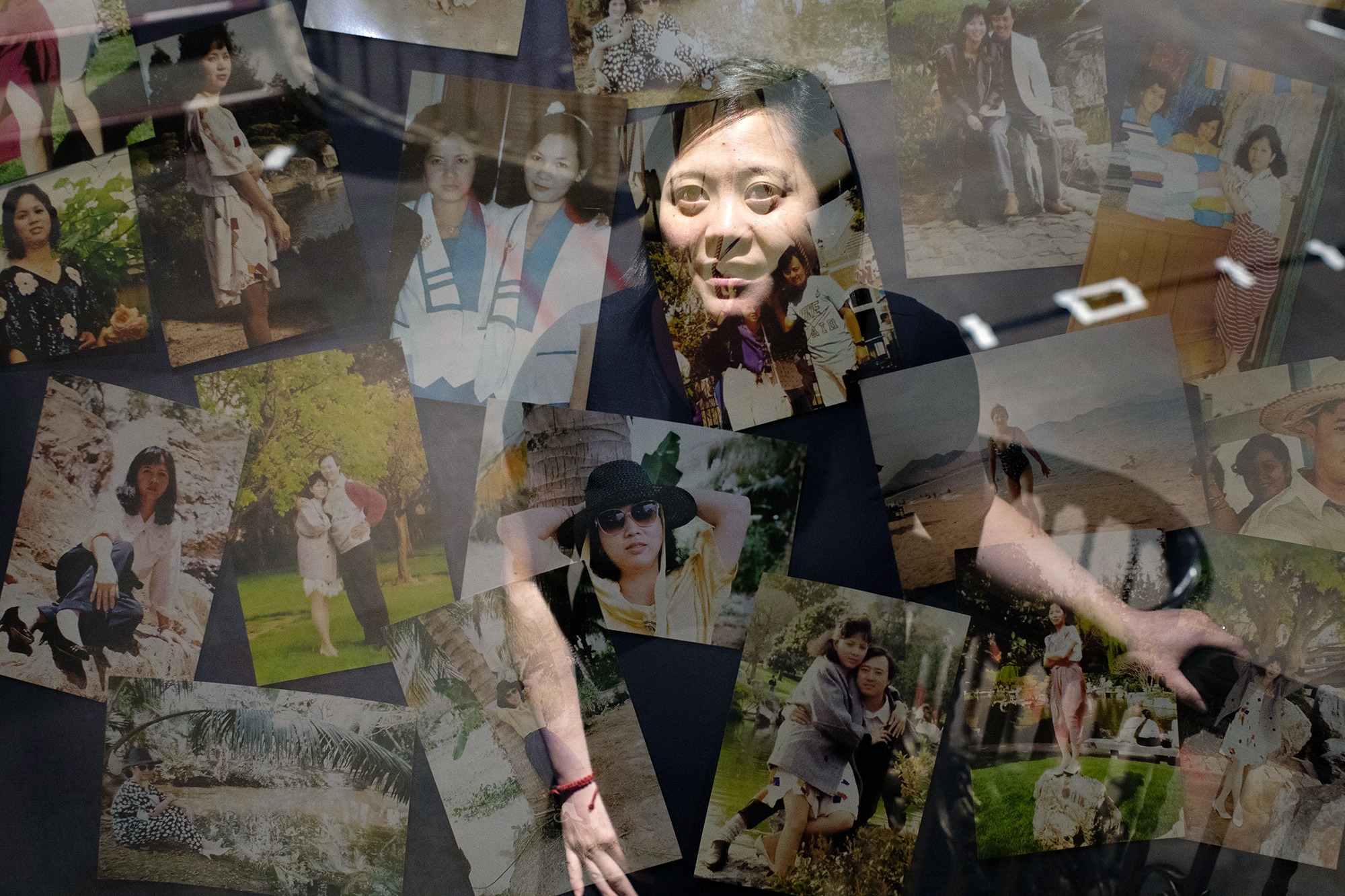 Performance artist Susan Lieu inside the Bullitt Theatre at ACT Theatre in Seattle, juxtaposed with snapshots of her mother in an in-camera double exposure photograph. (Matt M. McKnight/Crosscut)

Susan Lieu loves surprises. That’s part of the reason she doesn’t want to know the sex of her first baby, due to arrive in about eight weeks. Also, she doesn’t see why advance knowledge of her baby’s sex should matter. So for now, she refers to the baby bump as “Cletus the Fetus.” She likes the way it rhymes.

Lieu is about to give birth to a creative baby, too —  the premiere of Over 140 Lbs. at ACT Theatre (part of the upcoming Solo Fest). It’s an extended sequel to her highly praised one-woman show 140 Lbs., which had two separate sold-out runs in Seattle last year. In the original show, Lieu tells the story of how, at age 11, she lost her mother. She criticizes unrealistic beauty standards in the Vietnamese community, which led her mother to seek a tummy tuck, nostril reduction and chin implant — procedures that resulted in her death.

Lieu also explores how being a child of refugees influenced her own relationship to food and body image. During our recent interview, she noted a longstanding Vietnamese myth about eating everything on your plate: "For every grain of rice you don't eat, you have to eat a worm in hell."

Her new version of the show contains about 40 percent new material, she says. “There are so many metaphors of rebirth, of me as an artist, of me as Susan becoming a mother, searching for my mom and becoming my mom.”

Thanks to her business savvy (she has an MBA in marketing from Yale, has worked as a consultant in the tech world, and launched a San Francisco chocolate company with her sister), Lieu was able to program her own nationwide tour of 140 Lbs. Using an Excel spreadsheet, she mapped out and cross-referenced cities where she knew people and where there were large Vietnamese communities. Over the last year, she performed 140 Lbs. 43 times, for more than 5,500 people across 10 cities.

Now back in Seattle, she's ready to present Over 140 lbs., which reflects her growing pregnancy and shifting perspective on parenthood, intergenerational trauma and the power of drama.

On a scale of Tuesday night karaoke to Beyonce at Coachella, how would you rate Seattle’s art scene?

I think it's like a burlesque show on a Sunday. There's a lot of work that's being done, but then it gets lost. That's why artists also get paid very little. It's this perpetuating cycle. It's creative, there's people doing amazing stuff, but it's also easily missed.

Been in Seattle: Almost six years

Which arts genre do you get out to most often?

For me it's theater because it helps improve my craft. I was just at an Ali Wong show in San Francisco. Yes, its standup comedy, but I'm actually just watching how she owns a stage.

What do you think people get wrong about being an artist — particularly in Seattle?

I think what the patrons get wrong is they assume artists are doing well financially. People you see on stage are the stars; they're making the experience happen for you. But at the same time, they don't get the best financial deal. They've got to have a side job or have so many other roles or just accept a certain level of income. What the artists get wrong is that they think this is the only way.

What would solve the most pressing issues facing local artists right now?

I mean the first [answer] is just money, right? Based on the network that I have and experience I have as an entrepreneur, I think about it in different ways. Whether that's corporate sponsorship or getting corporations involved to buy bulk tickets. It’s about fundraising on an individual and a community level, so that you can offer subsidized tickets. It’s looking at marketing, not just social media or having a postcard. I hope we can look at it in a systematic way for success. We can't keep tapping into the same people to come to the same show.

Who is “one to watch” in the Seattle arts scene?

I think she's already being watched, but let me make sure: I really like [multidisciplinary artist] Monyee Chau’s work. It’s raw and honest.

Whose art are you currently obsessed with?

The easy answer is any work from [140 Lbs director] Sara Porkalob right now. I’m excited about her next piece, Angel in the House, at Cafe Nordo. I think she's a creative genius.

What’s your next creative project?

The next thing I'm really interested in is activist work. My mom died in a medical malpractice incident, and in California your life is worth a quarter million dollars. I’m actually going to be working with Consumer Watchdog in California. We're going to put something on the ballot and if it gets approved, that quarter million dollars is going to be adjusted to inflation, so $1.3 million. I'll work on that and start to develop a piece to educate people and hopefully get it passed in November.