As support for a business tax in King County builds, should progressives celebrate?

Suddenly Amazon and other corporate backers are willing to make a concession — but only to avoid a larger one. 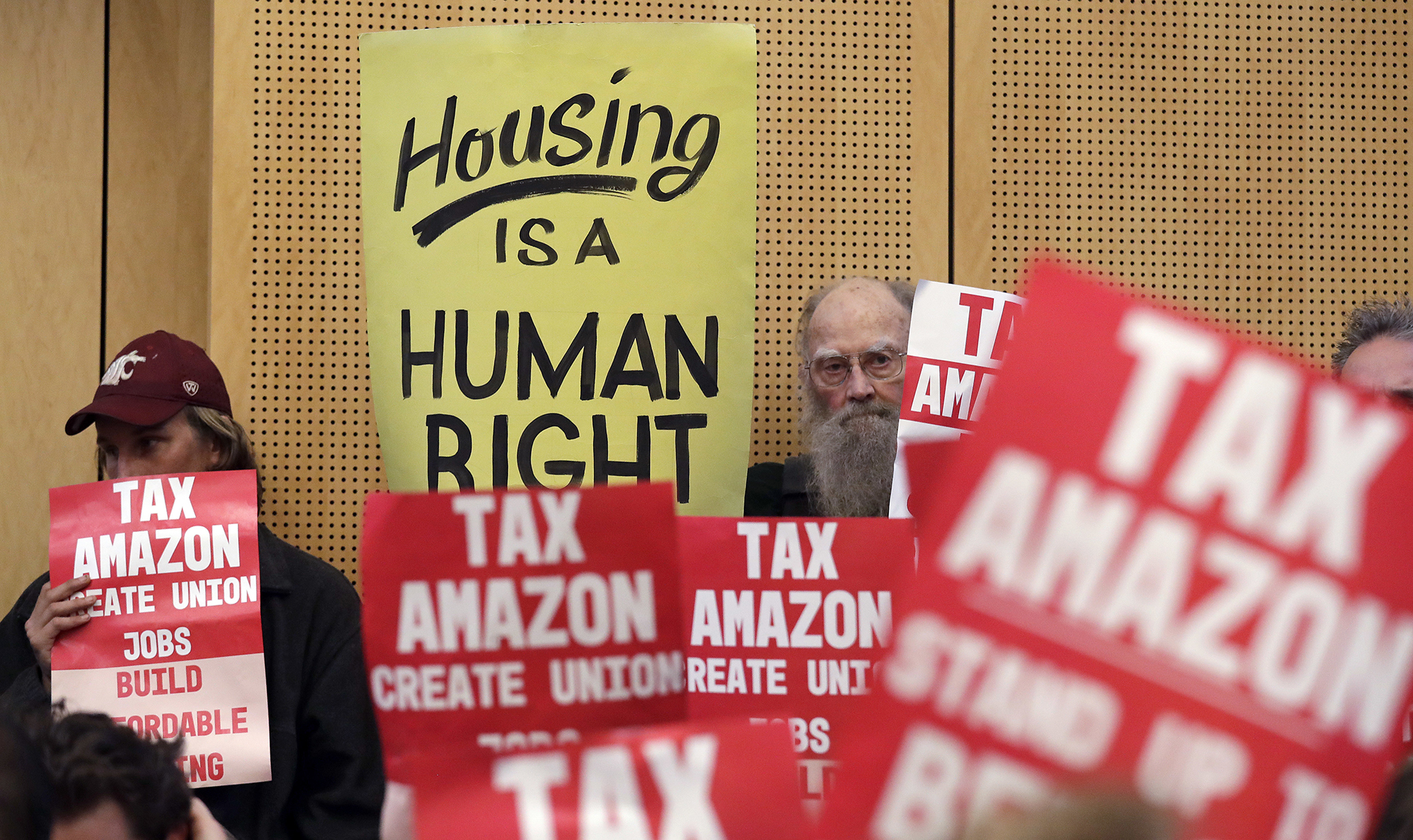 Proponents of a tax on large businesses to fight homelessness in Seattle look on at a Seattle City Council meeting before a vote on June 11, 2018. The proposed tax was passed, then promptly repealed. But a new payroll tax proposal has resurfaced on the state level. (Elaine Thompson/AP)

Last Wednesday, a bill dropped in Olympia that would authorize King County to tax corporations to raise new funds for affordable housing and homelessness. State legislators often introduce bills that have little chance of passing to make a point or start a conversation, but House Bill 2907 has some influential cheerleaders, including King County Executive Dow Constantine and Seattle Mayor Jenny Durkan. It’s a short legislative session, and things will move fast. Should we applaud, or should we scowl? What does this bill mean for the campaign to “Tax Amazon” that Seattle City Councilmember Kshama Sawant launched in January? What happens next, and how should we feel about it all?

Let’s get a few things straight. First, this is good policy. The tax is based on a corporation’s gross payroll, exempting pay to employees who make less than $150,000 per year. As such, it will fall mostly on tech firms and a smattering of other industries that employ high-paid workers. It will fall only lightly or not at all on the low-margin industries currently hit hardest by our state’s regressive business and occupation tax. The allowed tax rate is 0.1% to 0.2%; at the upper end, the tax is expected to bring in about $120 million annually. King County is badly in need of some progressive taxing authority, and a countywide affordable housing push makes a lot of sense.

But now come the caveats. Don’t let anyone tell you this plan solves all our problems. The $120 million is real money, for sure, but a new report from McKinsey & Company puts a much larger price tag on solving King County’s housing and homelessness crisis: “Fully addressing the issue will cost an additional $450 million to $1.1 billion per year for the next ten years, above and beyond what is currently being spent.” Now, if you layered on top of this $120 million another, say, $300 million per year from a new Seattle big business tax — an amount San Francisco already demonstrated to be perfectly feasible without the sky falling — we’d still come up short of the need, but we’d be getting a lot closer.

That leads to a third point. For some of its backers, this plan is first and foremost about one thing: Stopping the “Tax Amazon” campaign in its tracks. (Disclosure: I am a member of this campaign’s coordinating committee.) Already, the Downtown Seattle Association, which represents downtown business interests and has opposed Seattle business taxes again and again and again, has announced a condition for its support of the proposal: “In a county using this tax, similar local [city] taxes are preempted.” Kudos to Expedia, then, for publicly supporting the bill in its initial form, with no poison pill. But there’s little doubt a struggle is brewing over preemption. At the bill’s first hearing on Tuesday, Amazon and other corporate heavyweights submitted a statement supporting the concept but also opposing “a piecemeal solution.” There will be a powerful push to amend the law so that its passage and implementation would render illegal any new business tax in Seattle.

This is a textbook case of the powers that be making a small concession to avoid a larger one. Anyone who cares about truly righting our upside-down tax system and building affordable housing at scale should vigorously oppose preemption. Seattle has precious little progressive tax authority as it is. It’s irresponsible to bargain what we do have away — especially when the grand prize is a county payroll tax that tops out at 0.2%. (Move that decimal point over to 2% and then let’s talk!) Moreover, Seattle residents deserve to have a serious conversation about our revenue needs, which include not only housing and homelessness, but also the commitment to a Seattle Green New Deal the city made last fall. Whatever larger tax proposal emerges from the coalition convened by Sawant promises to jumpstart that conversation, as supporters hit the streets to gather tens of thousands of signatures for a citizen’s initiative. Preemption is a clever but cowardly strategy to cut that conversation short.

So what’s likely to happen? If Durkan, Constantine and Washington state’s corporate class all come together around a version of this bill that includes preemption, it will be surprising if they don’t get what they want. Still, time is short and there are many moving pieces. State legislators — especially the bill’s sponsors — will play a decisive role in brokering a deal, good or bad, or letting it all fall apart. King County Council members will have to pass the tax, too, so their opinion matters in Olympia. Now is the time to tell all these people what you think.

That we are even having a debate on these terms — not whether to tax big business, but how and how much — is a victory. We’re here thanks to everyone who has labored over the years to make progressive taxation in general, and taxing big business in particular, live issues that won’t go away. But clearly our work isn’t done.