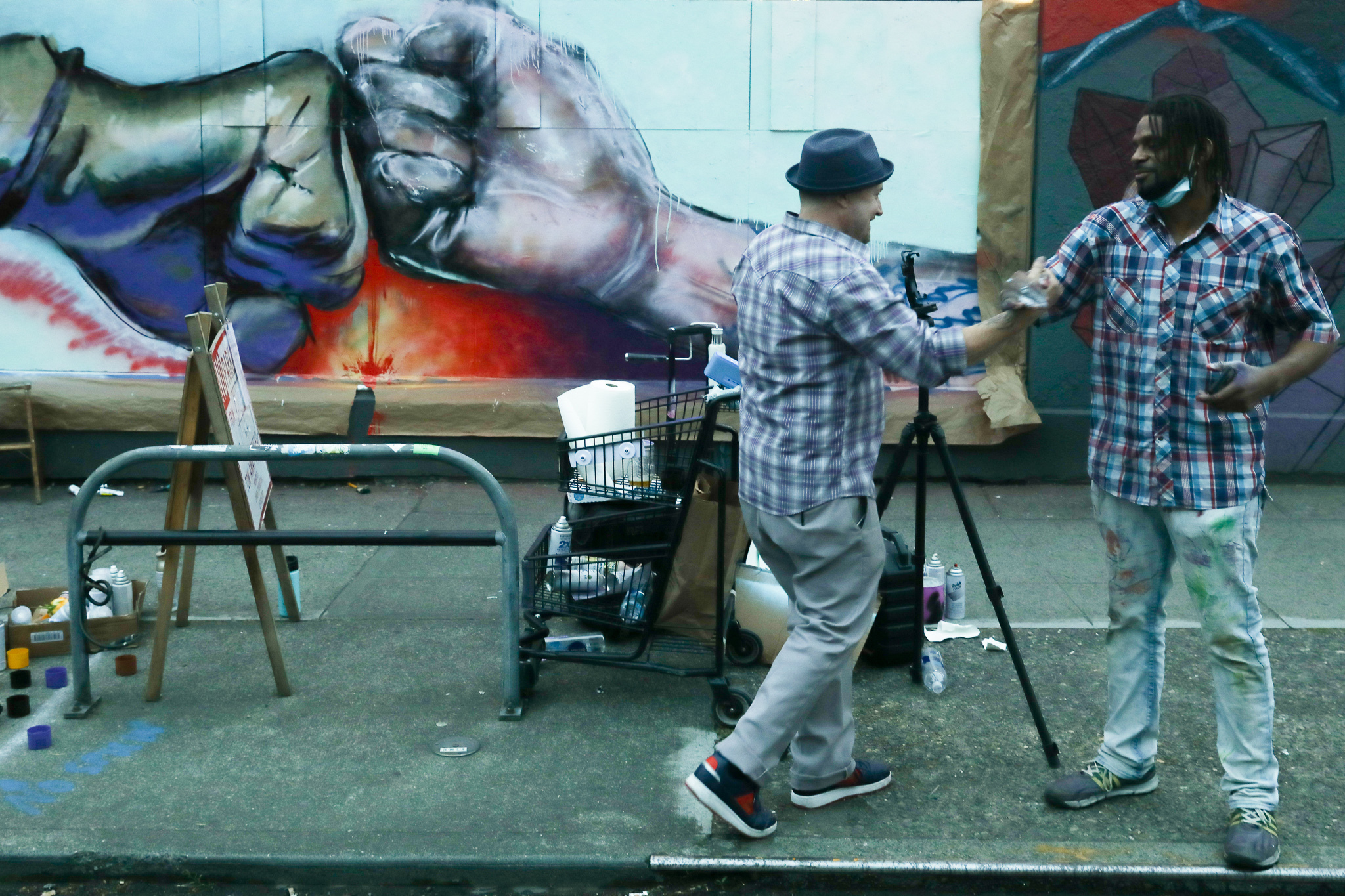 Does your brain feel like it’s physically expanding these days? Mine does.

Over the past several months, our collective imagination has shifted into overdrive. Just think of the changes we’ve been processing in short order: a world where putting on a protective mask is as common as throwing on a raincoat, where art and music and discussions are largely online experiences, where a heavily fortified police force isn’t presumed to be necessary. Where centuries-old inequities may finally begin to be addressed.

Imagining the particulars of societal change from the minor (will we ever sit in a packed movie theater again?) to the massive (what would “defunding the police” look like?) is an intellectual workout that can be both thrilling and overwhelming.

But when we say, “I never would have imagined…” in response to an occurrence — say, artists painting “Black Lives Matter” in gigantic letters on a street one block from a Seattle Police Department precinct (which is happening as I type) — it probably means we haven’t been imagining enough.

And when the imaginary “what ifs” leap out of our heads and into real-world creation, amazing things can happen. 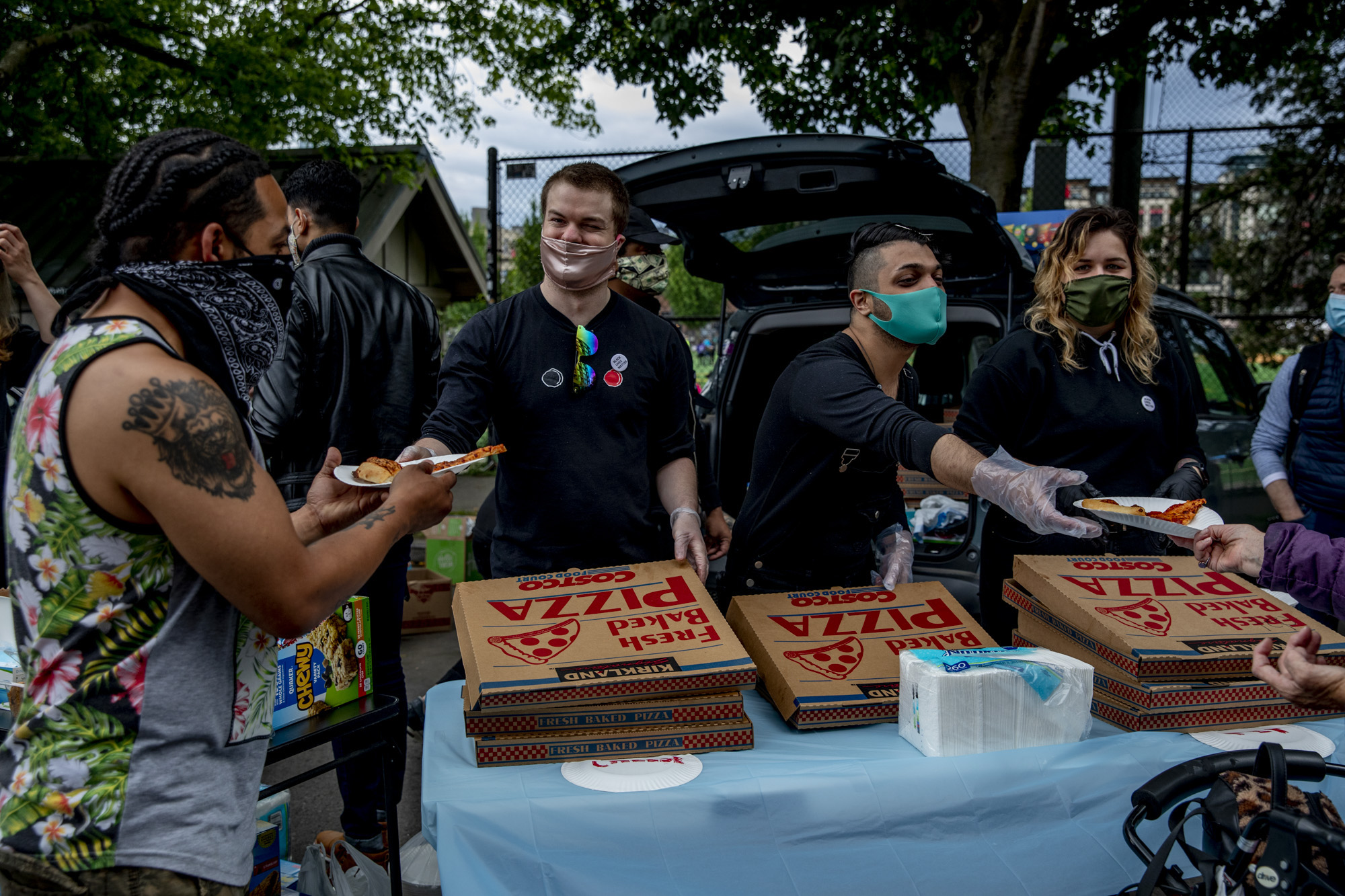 Friends Daniel Berry (left) and Macauley Williams hand out pizza to protesters in Capitol Hill on June 5. They were part of the spontaneous volunteer brigade that popped up in support of the demonstrations. (Dorothy Edwards/Crosscut)

Friends Daniel Berry (left) and Macauley Williams hand out pizza to protesters in Capitol Hill on June 5. They were part of the spontaneous volunteer brigade that popped up in support of the demonstrations. (Dorothy Edwards/Crosscut)

What if a community of volunteers sprang up to support people engaged in dayslong demonstrations against systemic racism? That’s what happened in recent days, as Crosscut’s Margo Vansynghel reports, when people set up makeshift stands to offer protesters free water, snacks, first aid, tampons, cellphone chargers, massages and coronavirus protection.

What if a family home in the Central District transformed into a thriving public space dedicated to Black art and culture? Artist Inye Wokoma made that dream a reality with Wa Na Wari, which he opened with three collaborators last year. While currently closed for coronavirus precautions, the space is producing cultural events online, including 2(06) The Break. Created in partnership with LANGSTON, this series of livestreamed DJ sets celebrates Seattle’s rich history of hip-hop musicians. This week’s show highlights Northwest hip-hop from the early 2000s, and features sets by DJ FreeQueenSee and DJ Sureal and conversation with solo MC Yirim Seck and Njuguna Gishuru of The Physics (June 13, 7-10 p.m. Free on Wa Na Wari’s YouTube Live page). Next week (June 19), tune in for a special episode commemorating Juneteenth.

What if books about racism filled the New York Times bestselling nonfiction list? That’s happening right now, with the top two slots dominated by Seattle writers: Ijeoma Oluo (for her book, So You Want to Talk About Race) and Robin DiAngelo (for White Fragility: Why It’s So Hard for White People to Talk About Racism). As of this week, you can buy these and other books on race, justice and activism from Estelita’s Library. Community activist Edwin Lindo founded the Beacon Hill-based, Black/Brown-owned social justice library and community space in 2018. The new partnership with Bookshop.org means a portion of book sales goes toward Estelita’s — and its forthcoming satellite location, which will house and display historic Black Panther papers.

What if people valued the Pacific Northwest’s only Black-owned bookstore enough to keep it open? It’s happening, with more than $88,000 raised to date for the Life Enrichment bookstore (known as LEMS), which for 20 years has focused its inventory on the African diaspora.

What if new housing developments in a historically African American neighborhood were built with Black architecture in mind? Africatown Community Land Trust has put that vision into action at 23rd and Union, with the Liberty Bank Building, as well as the forthcoming Africatown Plaza. 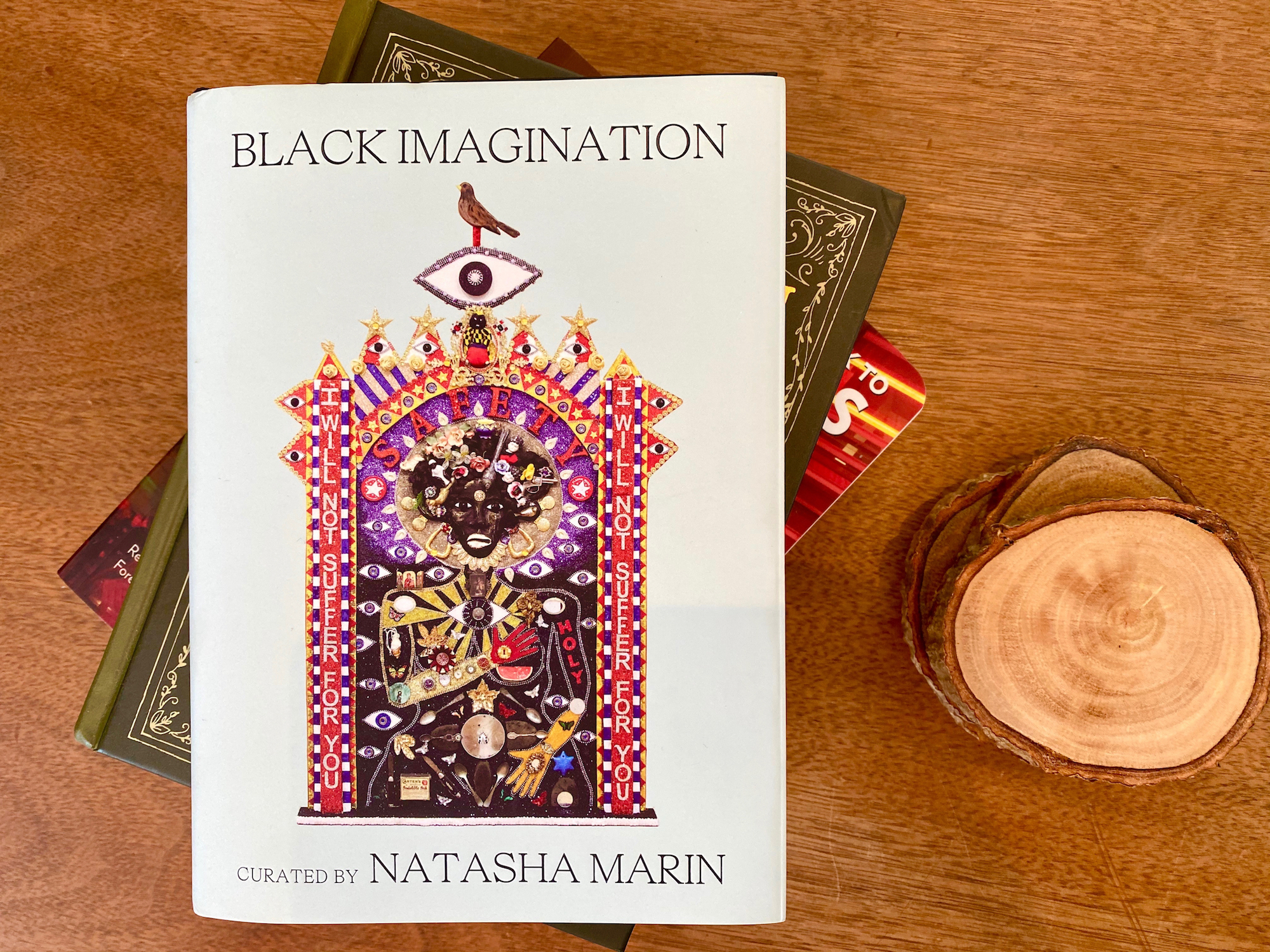 And what if you could bottle Black joy? Conceptual artist Natasha Marin did just that in a series of community activations for “Ritual Objects,” part of her ongoing Black Imagination project, which includes an anthology by the same name, released in February. Based on an earlier audio project, for which Marin interviewed Black men, women and youth from all walks of life, Black Imagination the book features short, personal responses to three questions: What is your origin story? How do you heal yourself? Describe/imagine a world where you are loved, safe and valued.

The whole collection is a remarkable documentation of the varied, visceral, sometimes furious and sometimes funny revelations of contemporary Black folks living contemporary Black life. But it’s the section in which the contributors imagine a world where they are safe that hit me most deeply. These entries are so personal it’s like being granted ESP — or at least for me, as a white woman, sudden, clear insight into exactly how lifelong oppression and inequality affects Black thought, Black existence.

What’s striking is that so many of the imagined scenarios read like basic human rights: “I think it might feel like my shoulders easing. My molars would no longer play pestle and mortar to my dreams, grinding them down into no thing-ness.” (Jen Moore) “There’s a reality where my skin is not a weapon, rather a virtue; an asset instead of armor.” (James E. Bailey) “I’m just out in the world, being myself without fear, shimmering through a star-filled sky.” (Laura Lucas) “There is always a seat at my favorite coffee shop and no pee on the floor when I go to the bathroom.” (Tamara Boynton Howard)

Other contributors realize they don’t even know what’s fair game to imagine. “Even when I attempted to imagine my made-up world, the magic was fleeting,” writes Adrienne La Faye, “and that in itself makes me want to weep.” The truth behind this testimony should make us all weep.

As the recent weeks of upheaval and reflection have revealed, it’s time for all of us to dream bigger, in order to create a safer, more equitable world.

“The well-spring of rebellion is our own imagination,” writes Gloria Steinem, in her blurb for Black Imagination. “Natasha Marin shows us how to free our imagining — as a first step toward freeing ourselves.”