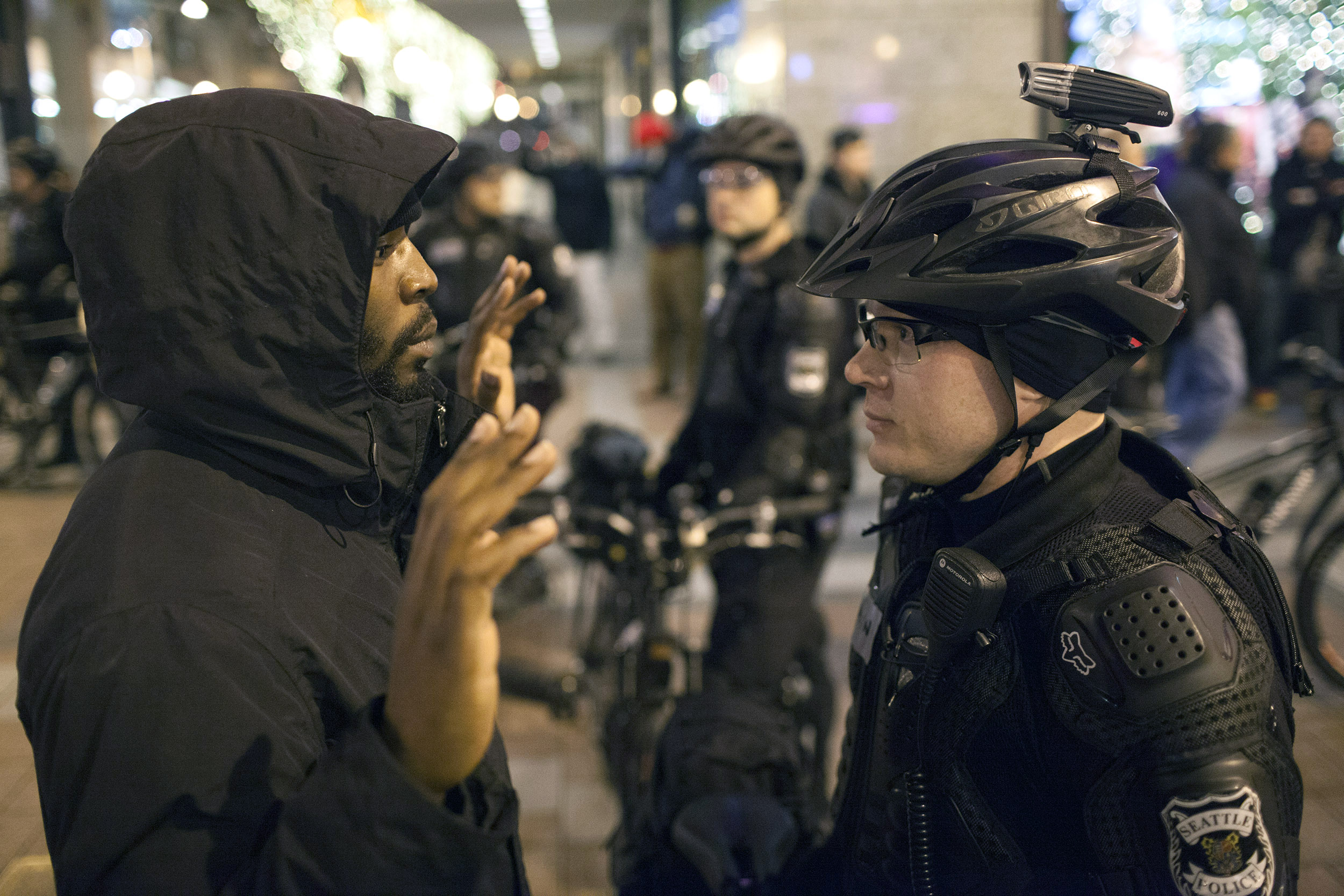 A protester puts his hands up and stands before a Seattle Police Department officer. Across the country, demonstrators have called for cities to rethink policing, divert funds to other social programs, and, in some cases, to dismantle municipal police forces and start over. (Matt M. McKnight/Crosscut)

The American uprising against police has forced the once politically unthinkable question: What would society be like if we abolished, or profoundly diminished, the police presence in communities?

Scholars, writers and activists have long considered this possibility. Many, including Ruth Wilson Gilmore, Angela Davis and Alex S. Vitale, have developed sophisticated theories about a life without both police and prisons, two institutions joined in a symbiotic relationship. But never in mainstream political debate has such a radical diminishment of police emerged as an achievable reality. Never, it seems, until now, in the final year of Donald Trump’s chaotic first term, when cities across the country are actively considering significant cuts to police department budgets and, in the case of Minneapolis, already working on dismantling its municipal police force.

Surely I am not alone in having felt disoriented by the force and velocity of this shift in the discourse around policing. A life without police? What about the murderers and rapists and other violent criminals? Forget possible, is a world without police even desirable?

Until very recently, most white Americans shared a conception of police as brave and responsive, a benevolent government agency called to violence only when absolutely necessary. Many Black Americans, on the other hand, have never shared such a conception. The recent killings of Ahmaud Arbery, George Floyd and Breonna Taylor have certainly helped to dissolve the illusion that police treat Black Americans with the same respect and professionalism with which they treat white Americans. (One of the men charged in the killing of Arbery was a former police detective.) The fact that so many Black parents feel they must impart to their children, in a kind of rite of passage, practical advice for dealing with or avoiding encounters with cops suggests a deep and agonizing distrust. That white people in general have long chosen to ignore this reality helps explain why the call for police abolition feels so disorienting.

These fresh realizations are also a result, I think, of how police have responded to the nation’s anti-racist uprising. All over the country, police have perpetrated acts of violence against peaceful demonstrators and journalists that have been tweeted, livestreamed and reported in a public procession of horrors. Police allegedly maced a child in Seattle. Two New York Police Department SUVs surged into demonstrators in Brooklyn. Protesters and journalists in Long Beach, Los Angeles, Minneapolis, Washington, D.C., and elsewhere have been shot in the face with rubber bullets. In Buffalo, police pushed a 75-year-old man to the ground, causing his head to collide with concrete; a widely shared video showed blood pouring from his ear as officers heeded orders to continue marching, despite having badly injured a civilian.

The chaos of recent weeks is a rare and traumatic blow to the white imagination. But it is also useful in at least one respect: It provides a very small sense of the aggression, brutality and callous disregard for human life that police are capable of enacting. It has helped me, I admit, to more viscerally empathize with the outpouring of anger and sorrow finding expression in big cities and small towns across the country.

It is one thing to consider the police violence of the past month; it is quite another to consider the long American history of pestering, plunder, terror and killings committed by police against members of the Black community. As Jelani Cobb wrote in 2014, following the nonindictments of the officers who killed Michael Brown and Eric Garner: “A democracy of grief binds those of us who survive people who were violently dispatched from this life — those who die at the hands of civilians, those who die from the wrongful actions of people empowered by the state. The sole difference between these deaths is that only with the former do we already know it’s a crime.”

One of the conditions of whiteness is the ability to move through life unburdened by the knowledge of all this suffering. The reason for this ignorance, beyond in many cases a willful looking away from the tableaux of Black killings by police, is both cultural and structural. As the writer Ta-Nehisi Coates recently remarked, broad swaths of the American public have effectively lived the majority of their lives without significant police presence, if any at all. I for one can count the number of encounters I’ve had with police on a single hand. The first and last time I was pulled over by an officer for speeding, I felt no fear at all. The Irish American cop asked me a question about U.S. history I couldn’t answer and let me go on my merry way.

My cautious driving habits notwithstanding, the nonpresence of police in my life is a reality borne in part of geography and privilege. I grew up in a mostly white town outside Albuquerque and attended a largely white private school in the city. In the rural foothills of the Sandia Mountains where I lived, I knew where the speed traps were and when to slow down. At school, there was no need to consider cops because there weren’t any. When police were summoned to boisterous house parties, we feared slaps on the wrists or fines, but never arrest. When word spread of a kid with a drug problem, parents almost never called the police. Involving their kid in the criminal justice system was the last thing they wanted; instead they relied on the abundance of services at their disposal: counselors, psychologists, rehab facilities. The constellation of support available to many white families meant they didn’t have to rely on police.

Calling the police is also a last resort for many Black Americans, but their reasons for avoiding engagement with law enforcement are of a different sort. While Seattle police, under the watchful eye of a federal judge, have made some progress in improving its relationship with the community, troubling problems remain. In a city where African Americans comprise 7% of the city’s population, nearly a third of all uses of force and over a quarter of instances of drawn firearms have been directed at Black residents. Very few Seattleites believe that police treat Black, Latino and Indigenous people the same as white people. “On every specific measure we asked about,” reads a 2019 report by Anzalone Liszt Grove, “African Americans were still less likely than whites to report a positive interaction with the police.”

Read more: White innocence is a fantasy. Here's how I'm confronting it

The evidence does not stop there. Municipal police forces have a poor record of solving homicide cases, especially in Black neighborhoods, to say nothing of the way police have historically treated, or neglected to treat, cases involving rape and other acts of sexual violence. Many officers themselves acknowledge they are not properly equipped to respond to mental health and drug crises. And the presence of police in schools is known to hurt graduation rates and student test scores, as well as contribute to rates of arrest for Black students that are three times higher than that of white students.

Those who fear an uptick in crime and violence in Black communities should defer judgment on such matters to members of those communities. They should reflect on whether violence committed by the state provokes in them as much consternation as violence committed by civilians. They should consider the alternatives to police surveillance, punishment and incarceration already serving communities burdened by crime. They should ask what might be possible if these programs were better funded. A system of public safety that prioritizes community healing, restoration and care is not a pipedream; it is a reality for many white Americans.

Already in Seattle, we have witnessed with startling clarity what effect a diminished police presence can have on protests and demonstrations. The nightly standoffs between protesters and police on Capitol Hill were marked by tension, hostility and asymmetrical violence. Protesters who threw rocks and water bottles at police were met with a sobering show of force involving tear gas, pepper spray and blast balls. (The response has been roundly condemned by police accountability groups.)

But, last week, when the Seattle Police Department abandoned the East Precinct, something remarkable happened: Protesters gathered in the rain to watch a documentary. A mostly family friendly calm has persisted at the so-called Capitol Hill Autonomous Zone, or Capitol Hill Organized Protest, throughout the week. Enduring claims by Trump and Fox News that a violent insurgency is underway, or that domestic terrorists have proliferated in the area, are gross distortions if not outright lies. When I visited last week, I saw the trappings of an edgy farmers market, not the beginnings of an insurrection. According to The Seattle Times, protesters have discouraged destruction and worked to de-escalate conflict. While it is true that armed members of the Puget Sound John Brown Gun Club, so named in honor of the 19th century white abolitionist, have been patrolling the zone, it is worth pointing out that neither Trump nor Fox News condemned the armed masses who gathered at statehouses and intimidated liberal politicians at last month’s protests against pandemic lockdowns.

Two weeks ago, I could not imagine a world without police. In many ways, I still can’t. The reactionary resistance to abolition will be fierce, but the convulsions of this transitional moment in American history have widened the horizons of possibility. We need not create an entirely new world. We know what a world unencumbered by the unwanted presence of law enforcement looks like. My life testifies to this. It has been a good life, and we all deserve a good life.