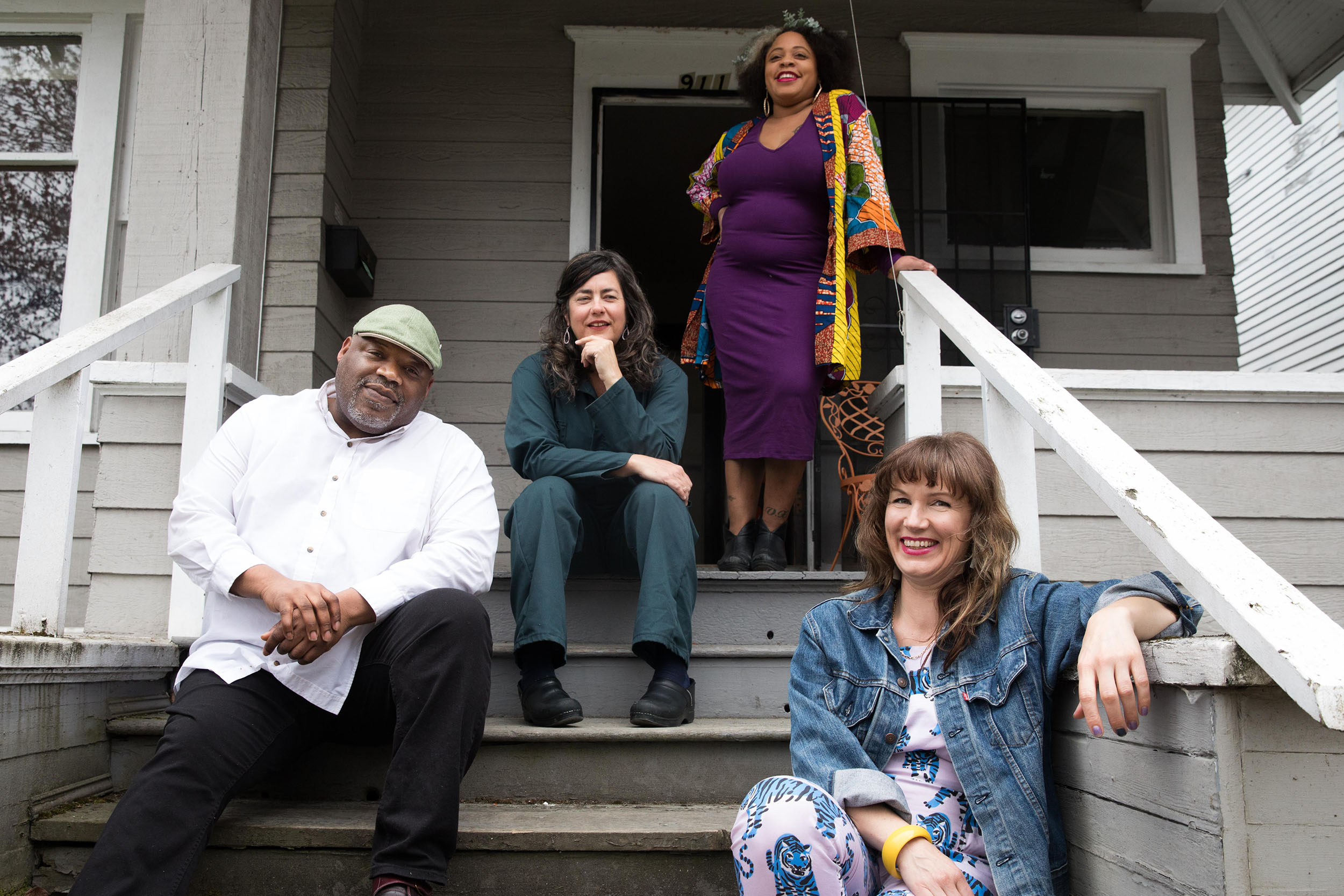 Wa Na Wari organizers, from left, Inye Wokoma, Jill Freidberg, Elisheba Johnson and Rachel Kessler at Wokoma's grandmother's house in Seattle's Central District, March 22, 2019. The group recently decided to rent the home and turn it into a space for Black arts and culture. (All photos by Matt M. McKnight/Crosscut)

Photographer and filmmaker Inye Wokoma, standing near the large window in the back of what was once his great-aunt Birdie’s Central District home, points to the blue Craftsman across the yard where he grew up. He still remembers how he used to cross the backyard that connected both houses. To him, his siblings and his cousins, who lived in neighboring homes, the communal courtyard was an enclave of endless play possibilities. They’d scuttle through the never-closed backdoor of the house of Maunt Birdie (an affectionate amalgamation of Mama and Aunt), up the stairs and back down again. The aroma of Birdies’ pastries filled the living room.

On this day, the living room is nearly empty. No TV, no green couch, no toothsome pastry scents. Next week, however, the house will be filled with art, concerts, film screenings and people when it reopens April 5 as a Black arts and community space called Wa Na Wari.

“Wa Na Wari means ‘our home’ in Kalabari, the Ijo language of southern Nigeria, where my father is born," Wokoma says. It refers to the idea of home, a place where one can feel rooted in the metaphysical sense of the word. The Wa Na Wari space is, of course, also a family’s home — at least four generations of Wokoma’s family, including his great-aunt Birdie, have lived in this house since Wokoma’s grandparents bought it in 1951.

Now the house will be home to rotating exhibitions of contemporary art by Black artists and function as the new listening and recording studio of the Central District oral history project, Shelf Life Community Story Project.

“Art is the convener," says artist, curator and arts administrator Elisheba Johnson, one of four people behind the project. “But it will also be a space that is completely open, where people can come in, set up their computer, get a cup of coffee, have a meeting, play games, hang out,” she says, painting an image of, oh, two grandmothers sipping coffee at the grand wooden table she is sitting at today.

The other project collaborators include Jill Freidberg, who started Shelf Life Community Stories in 2016, and writer and artist Rachel Kessler. Last year, the members’ artistic paths crossed when working on a call for public art in the Central District. The foursome created a portable “living room” wherein community members were invited to help decide what the public artwork would look like, pouring through archival images, maps and sharing stories of the city’s historic African-American neighborhood, which has seen a dramatic decline in its Black population in the past decades, from more than 70 percent in the 1960s to less than 20 percent today.

What emerged from the community responses was clear: Nobody wanted a eulogy. The neighborhood was not dead. They were still there.

“We wanted to keep that going,” says Johnson. Wokoma has been the caretaker of the house for his grandmother, who is in her 90s. When the most recent tenants vacated the house, Wokoma opted to rent the house himself with Johnson’s help and fill it with art instead.

“This was not even a month ago,” Johnson says, laughing. On a tour, the team points how the space will be transformed: In the street-facing window, a large screen with photos and stories of current and former Central District residents, as well as a visual mapping project Kessler worked on during her Yesler Terrace Artist Residency. Inside the living room, a group of local “artivists” and storytellers of color who go by the name the Unapologetic Artists and Creatives, will mount a photographic ode to the convening forces of front porches.

The upstairs bedrooms will be filled with new collages by Chi Moscou-Jackson, and videos by Portland-based new media artist Ariella Tai and filmmaker Howard Mitchell. In April, longtime Central District resident, activist and rapper Yirim Seck will perform in the living room. Later, Kessler, whose Jewish ancestors lived in the neighborhood, will organize a free-wheeling memory mapping workshop, which, according to Kessler “can be a powerful tool in claiming space, both individually and collectively.”

Downstairs, in the kitchen pantry, a vintage buttercup-yellow rotary phone is one of the few physical clues of the house’s artistic future. Visitors will be able to pick up the phone to listen to personal accounts, memories and stories of Central District residents Freidberg, Wokoma, and others have collected as part of Shelf Life. The project has been without a home since a storefront in the Promenade Shopping Center and Red Apple Market on 23rd and Jackson closed in 2017 and was later demolished to make way for new development. In a former bedroom on the upper level, Freidberg will install a new oral history recording studio.

“I’ve been recording these stories about the Central District since 2016,” says Freidberg. “What I’ve heard again and again is exactly what Inye describes: these constellations of relatives’ and friends’ homes, churches, barber shops and grocery stores; that feeling of [belonging], feeling safe. It feels right that we can continue to share those stories in a physical location that has been a home for so many decades and generations.”

Explosive growth and gentrification have put immense pressure on these communal ties of the Central District. Wokoma, who has been fighting to keep himself and his family in the neighborhood, has seen relatives forced to scatter across the region in search of affordable housing. 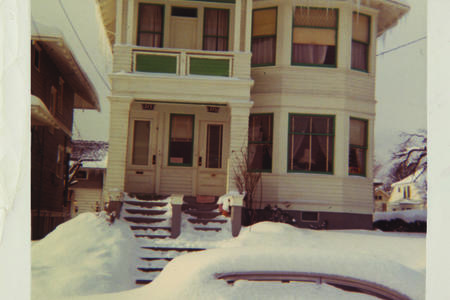 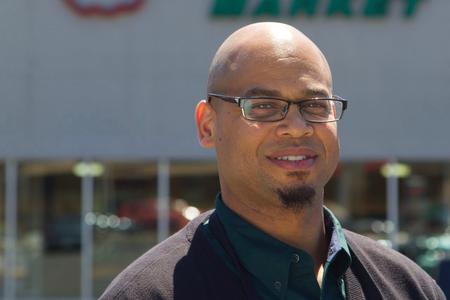 In this rapidly gentrifying neighborhood, the deliberate decision to hold on to the family home and create a Black-centric space is a powerful symbol.

Making Wa Na Wari a home for Black art and community is a way to “signal, both to my family members and my broader community, that their presence is recognized and valued. That they’re welcome here,” Wokoma says. However, he adds, creating a Black home for art in the CD is not a comeback: “I never left.”

“Keeping this space Black in this neighborhood is a reclaiming of space,” Johnson points out. Making a home for Black art, Black stories and Black connection, she says, is a political, radical act. That’s why the team is planning to host big, joyous parties later this spring and summer. “Black folks are not interested in telling their pain all the time. We’re interested in the joy part of our story. A house party can act as an anti-gentrification proclamation.”

Johnson and Wokoma are paying April’s rent out of pocket, and through a fundraising campaign hope to raise money for the next few months’ rent and expenses. They have dreams of expanding the project into neighboring houses with artist residencies, massive installations, theater, dance and gatherings — so that this collection of houses can become home to a joyous enclave of Black community again.