At MadArt gallery, artist Casey Curran is building a new world after a destructive year. It’s literally and figuratively moving.

Artist Casey Curran has carefully crafted a moving field of delicate flowers out of white, laser-cut polyester drawing paper. The installation, which moves thanks to a motorized pulley system, is on view at MadArt gallery in South Lake Union. (Dorothy Edwards/Crosscut)

Seattle artist Casey Curran is constructing tall wooden towers in South Lake Union’s MadArt Gallery. From thousands of half-inch strips of medium-density fiberboard, he has built a grid of 20 Jenga-type structures of varying heights, some reaching 8 feet high, in preparation for his immersive exhibition Parable of Gravity.

“They’re kind of my stand-ins for industry,” Curran says, standing amid the thicket of scaffolding slowly filling the gallery on a recent Saturday. The show officially opens Feb. 11, but visitors can stop by before then to see the artist at work. “We look at the Seattle skyline, and we can see all these buildings under construction. And when you look through them, we are seeing this gridwork, this very manmade gridwork that doesn’t really exist in nature.”

In the gallery grid, something’s clearly gone awry. Some structures appear to be disintegrating from the top down. As a team of assistants slathers the wooden strips in a mixture of potting soil, wood glue and paper, towers begin to look tarred, burnt, molding, decomposing.

As Curran puts it: “What comes up must come down.”

Still, there’s a glimmer of regeneration: an otherworldly garden. A field of delicate white flowers and spikelets rooted atop brass wires grows from the destruction. Curran carefully crafted the flowers out of white, laser-cut polyester drawing paper. When he has completed the installation, a motorized lever system will make the petals flutter up and down, left and right — like a time-lapse of flowers in a nature documentary, blooming, growing, opening and closing with the rhythm of the sun and the moon.

“For me, this whole exhibition is kind of about humanity’s greatest failures and successes, all wrapped into these cycles — especially viewed through the lens of civilizations and how they grow, how they die and then what comes next,” Curran says. 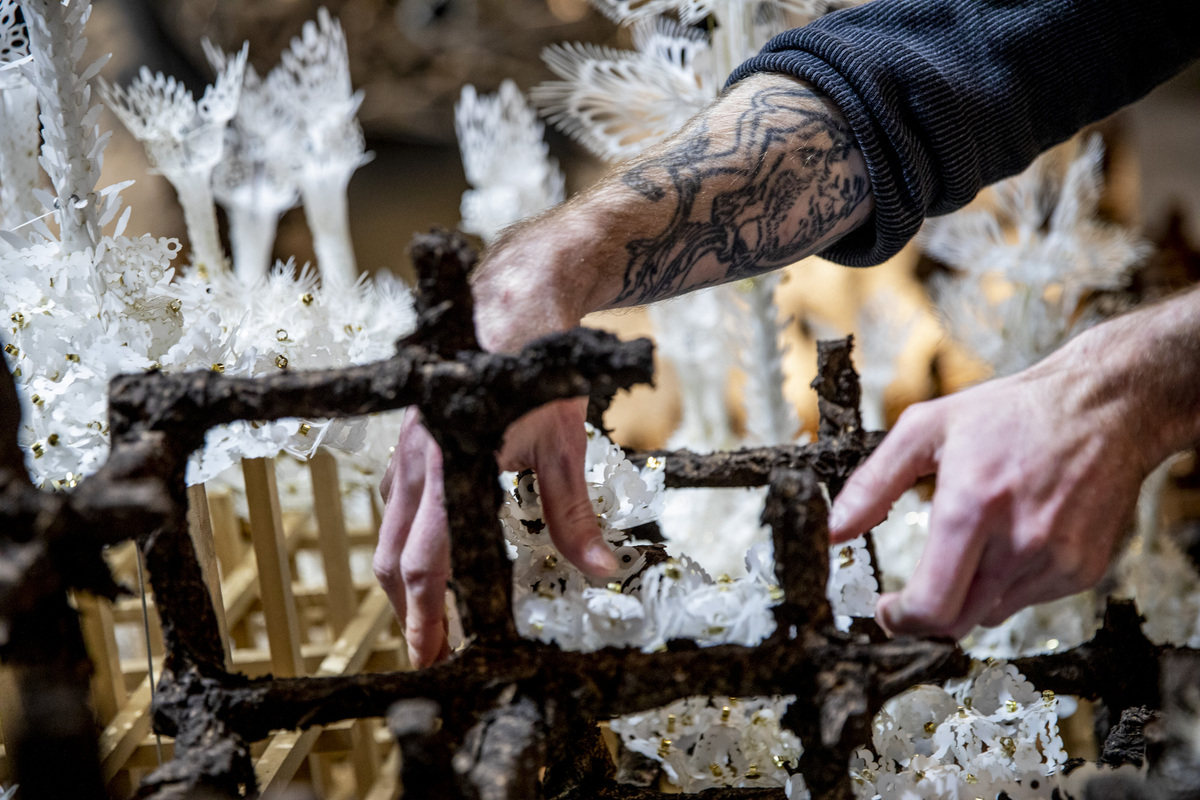 The towers, he notes, are stuck in a suspended state: It’s not quite clear whether they are crumbling or rising up, coming apart or blossoming with (new) life. Having emerged from 2020 — a year of death and destruction — the white flowers coming up gasping for air might signal hopefulness. But they also contain a warning: We’re not out of the woods.

“It feels like there’s this moment where a lot of things can happen, either going sideways or becoming something new and beautiful, or not,” Curran says.

As we’re talking, a few weeks after the insurrection at the U.S. Capitol, Curran points out that even though the show came about before the insurrection and was planned even before the pandemic, it feels timely. In many ways, the U.S. and democracy are at a crossroads, he says. More destruction — or recovery? Plus, he points out, a pandemic tore through the world exactly a century ago, and fascism is once again on the rise. We move in cycles. 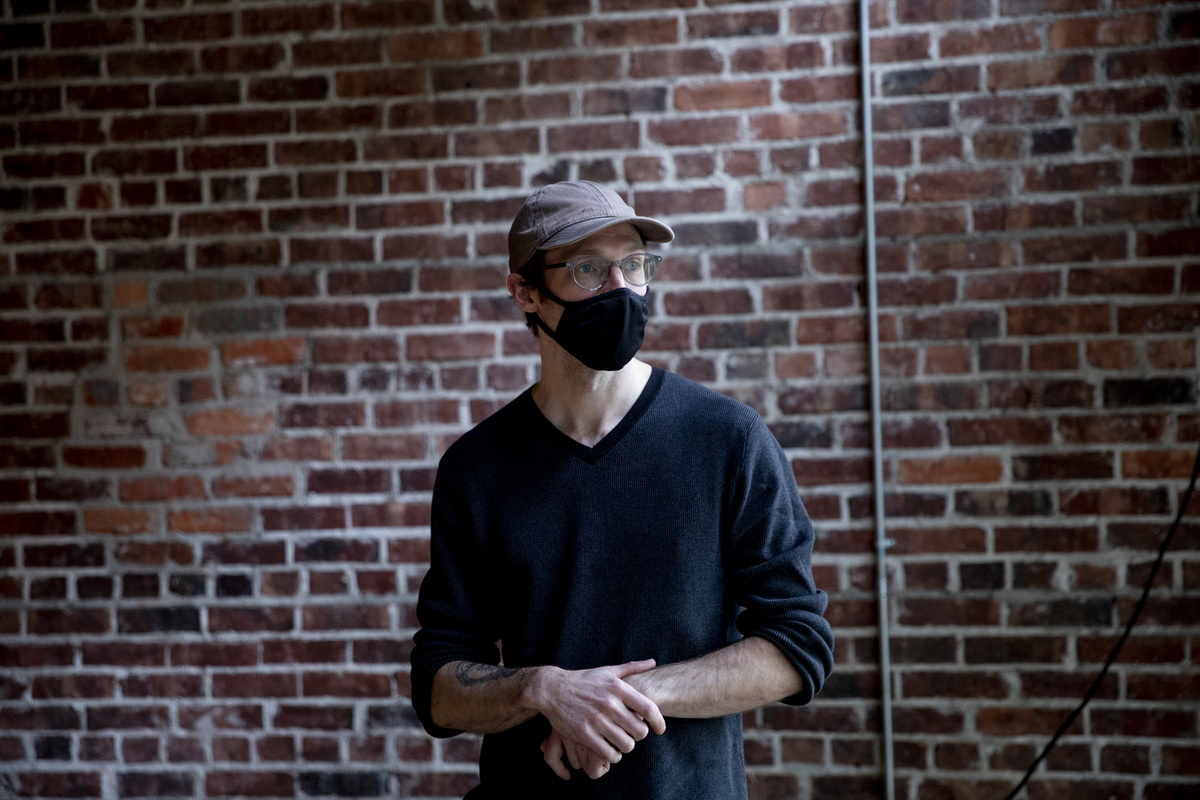 Artist Casey Curran has always been intrigued by the cycles of nature and the cosmos. The two fascinations combine in the show “Parable of Gravity” at MadArt gallery in South Lake Union. (Dorothy Edwards/Crosscut)

Artist Casey Curran has always been intrigued by the cycles of nature and the cosmos. The two fascinations combine in the show “Parable of Gravity” at MadArt gallery in South Lake Union. (Dorothy Edwards/Crosscut)

But Curran’s not the type of artist who makes overtly political work. Since graduating from Cornish College of the Arts 15 years ago, the artist has built a loyal local following with his intricate, sometimes whimsical sculptures assembled with bird feathers, taxidermied animals, books, brass wire and cut paper.

His installations are often moving, literally and figuratively. In each work, there is something fluttering or pivoting or swaying in an imagined wind, either with the help of a small motor or visitor-pulled crank. For the  Bellevue Arts Museum biennial show Metalmorphosis in 2016, motion sensors activated small motors that brought a brass-wire garden alive.

From a young age, Curran’s been fascinated by the cyclical rhythms of nature and the cosmos. Growing up in Maple Valley, he lived near a river that flooded every year. After the water receded, the Earth looked different every time. A new ridge. A fresh buildup of stones. A widening berth.

Space and science fiction enthralled him, too. His father, a carpenter, owned thousands of science fiction books, which he stored in a library he constructed as a structure abutting the main house. Curran remembers leafing through the books, pawing the covers, amazed.

Like his father, Curran was somewhat of a builder and tinkerer.

As a teen, he enjoyed making artworks out of wire. And then a high school art teacher showed him a video of Alexander Calder, the father of the art mobile, making a circus of puppets move with wires. “He was, like, this big bear of a man, but it also had this gentle quality,” Curran says. “As soon as I saw that video, all [my] work suddenly became kinetic.”

His most recent installation, at the Museum of Museums, is a skeleton sketched in black wire with white flowers growing from its slumped back. Hanging from the ceiling, its legs move very slowly forward. The flowers open and close their mouths as if singing an imperceptible song.

Most recently, Curran designed two kinetic headpieces made out of fluttering feathers and fins of Duralar paper for the Dutch futurist-fashion designer Iris Van Herpen. (Their union makes sense: Van Herpen and Curran are both fascinated with technological innovation and biological structures; their work is simultaneously spacey and grounded.) As models walked the runway of Van Herpen’s  Paris fashion show “Roots of Rebirth” in late January, the feathered crowns trembled with each step.

Though Curran’s craft is on majestical display in these delicate works, he also loves making grand, immersive installations and theater sets, including for Seattle performance companies Saint Genet, Implied Violence and Whim W'Him. For Whim W'Him’s latest dance film, This Is Not The Little Prince (which premiered in late January), Curran created a moving sculpture out of aluminum blades that move like waves.

“He has the amazing ability to give inanimate objects a beating heart and make them transform into something that is alive, and you can’t stop looking at it,” Olivier Wevers, Whim W'Him’s artistic director, told me in a recent email. “You want to understand it, but it almost feels impossible.”

At MadArt, a large hanging sculpture exudes a similar captivating power. Suspended from the ceiling, the car-sized, yam-shaped blob hovers about a foot above the gallery’s shiny terrazzo floor. The amorphous structure, composed of a tessellated puzzle of sharp aluminum triangles, looks both harmless and menacing as it leans over — a gentle giant possessing massive force.

The actual name of the piece is “Anchor of Janus,” after the Roman god of beginnings and transitional moments. It’s modeled after the 951 Gaspra, the first asteroid photographed during a flyby, in 1991 — a feat of technological advancement. Curran looks up at his version. “It’s a bit of a harbinger,” he says. “It could be the seed of growth, or destruction.”

Will our planet’s gravity pull in this mammoth rock? Will it crash into Earth and destroy cities, change our climate and expedite extinction, as others have before it?

In the show, Curran leaves these questions unanswered, but from the destruction on the ground, it is clear the asteroid didn’t have to touch down to wreak havoc. Humans are already destroying the Earth. 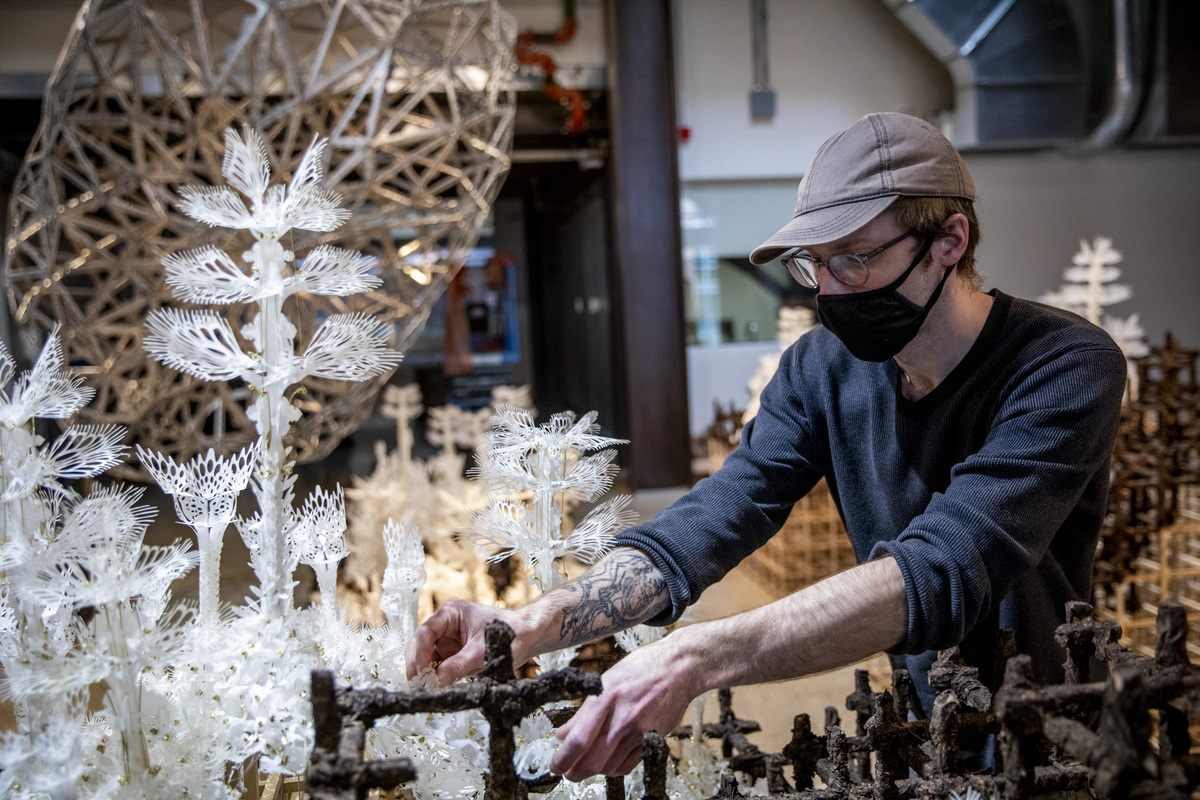 At MadArt, Curran crouches to the floor, softly touching the delicate-looking Duralar petals. With his finger, he traces a few steel wires that run down to a system of hinges and a crankshaft in the center of this flower-infested tower. Later, he’ll attach a small motor to each crankshaft to make the flowers move as if by magic.

With this show, “it’s super important for the viewer to be able to walk through the pieces,” he explains, and take in the intricacy of each flower as well as their force as a chorus “and just really experience this mass of crawling life.”