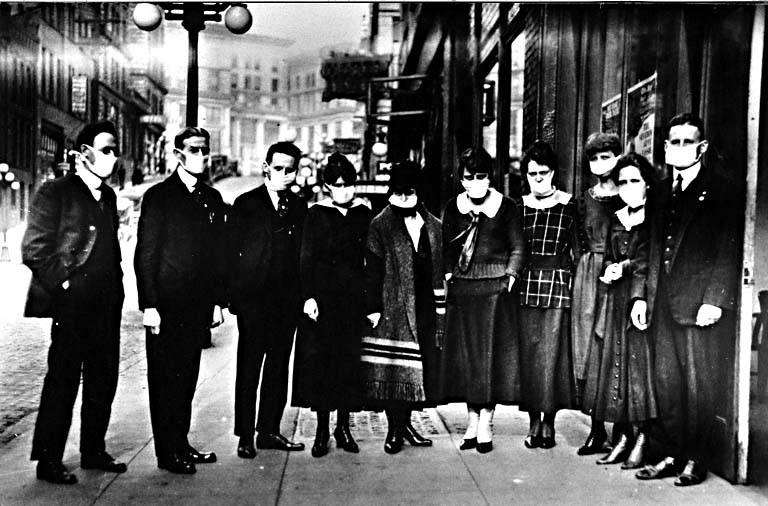 Seattle has seen a killer flu before. The Spanish Flu pandemic hit the region hard in the fall of 1918 in a slow-rolling wave that didn’t peter out until March of the following year. This deadly version of influenza killed an estimated 50 million to 100 million people worldwide. Some 25 million Americans came down with it. An incredible 675,000 died as a result.

It was likely brought to Puget Sound through military connections, perhaps by soldiers and sailors exposed to those returning from service in World War I. It first cropped up in Seattle among Navy cadets at the University of Washington, soldiers at Camp Lewis near Tacoma and among shipyard workers in the Bremerton Navy yards. These were also populations that often operated in close quarters, which could have contributed to the spread of disease.

During the six months it spread through a bustling, burgeoning urban Seattle, the virus killed some 1,400 to 1,600 people, despite public health officials trying to tamp it down by prohibiting public gatherings including church services, vaudeville shows, pool halls and charity fundraisers. Various tactics were applied: A serum was developed and dispensed to shipyard workers helping the war effort. For a time masks were required in public spaces, including on Seattle’s public transit. The city’s schools were intermittently closed. People were encouraged to stay home or to go to the hospital for treatment. The authorities sent mixed signals and received pushback from churches, theater owners and the public who often insisted in milling about on downtown streets if they couldn’t go see a movie or performance. To the confusion of many, people were advised to get fresh air and stay indoors.

An “Influenza Squad” of Seattle police was formed to break up crowds, be they in saloons or soda fountains, and to enforce a ban on spitting by arresting expectorating miscreants. The public was sometimes compliant. One big problem was that folks who had mild cases continued to go about their business spreading the flu to people who would often suffer severe consequences, like pneumonia.

Public health officials and politicians were often overly optimistic about containing the disease. It would seem to fade, then pop up again with renewed fervor. Quarantining sick people seemed to be the most effective action. University of Puget Sound professor Nancy Bristow, who authored the book American Pandemic, about the national crisis of the influenza outbreak, concludes that “social distancing,” though very difficult to enforce, was the most effective tool authorities had at their disposal in 1918. By the end of February 1919, the pandemic was largely over.

The crisis impacted my father and his parents, immigrants who were struggling in the growing city. My grandfather, a mechanical engineer from Norway, had to go far afield for work in Alaskan canneries while my Scottish granny took care of my father back in Seattle. They were poor in those early days. A family story has it that my grandparents used to fight over a single hardboiled egg for breakfast, each insisting the other have it. My father suffered some lifelong conditions as a result of poor childhood nutrition.

The Spanish flu preyed on everyone, but unlike today, it wasn’t mostly the old and sick who suffered so much as the young — half of those who died were between ages 20 and 40. My grandparents, in their 20s during 1918, were in that demographic sweet spot.

My father dictated an oral history of his childhood years before he died in 1990. It’s very incomplete, but I will let him tell his flu story, what he remembered from when he was about 4 years old. My guess is this took place in late 1918 or early 1919:

“When dad returned from Alaska we moved to a basement apartment in the University District. … People were wearing masks over their faces because of the flu epidemic, and Mother nearly died. I remember the doctor coming to see her. She was dry and very flushed with fever, and breathing badly and [the doctor] apparently gave my father some bad news because my dad put his arm around me and we sat in the bedroom for a long time. He put me to bed, and I cried, because I knew something bad was going to happen.

“I was told later that two days after Mother’s crisis the doctor himself had collapsed and died, apparently sick with pneumonia while still tending the sick as best he could. If my dad and I got influenza it must have been mild.”

My grandfather could be a rather stern Scandinavian papa, so the image of the two of them sitting vigil over my granny — with a physical sign of affection to boot — underscores the severity of the situation.

Dad’s account brings to mind a couple of other things. The city health officials encouraged people to go to the hospital if sick, but later encouraged them to stay home to be cared for by family members so that more severe cases could be tended by professionals. One problem with the stay-at-home approach was that it probably caused an undercount of flu cases. It’s sobering to realize the crisis grew so large that health care was rationed.

I’m struck that poor folk like my grandparents could afford to have a doctor make a house call, which suggests they were luckier than many. The doctor was not alone. Bristow says that “hundreds and hundreds” of American doctors and nurses died during the outbreak.

Holding on to such memories is important, Bristow says. The 1918-19 epidemic was largely forgotten, subsumed, she says, in the story of World War I. She too lost family (her great-grandparents) to the epidemic, but did not find out how they died until some 70 years later. In the event of a new pandemic we need to have the capacity to remember, she says, “so that we’re conscious of those who have suffered losses” and can tend to their long-term healing.

Bristow believes the current coronavirus situation should also be a reminder of the inequities of access to health care. Because records were not kept, it is unknown whether Spanish flu killed more or fewer Americans by race, class or immigrant groups, but it’s a good bet care was not equal, then or now.

My father went on to become a physician and by all accounts had a great bedside manner with patients. He was very moved by the self-sacrifice of his mother’s doctor, a nameless physician whose sacrifice has had an impact down through the generations of my family. Thanks to my dad’s memory, I won’t forget how much it meant to us.