ArtSEA: Going for gold on the Olympic Peninsula

A medal-worthy arts road trip to Port Townsend, Port Angeles and the land of the “strong people.” 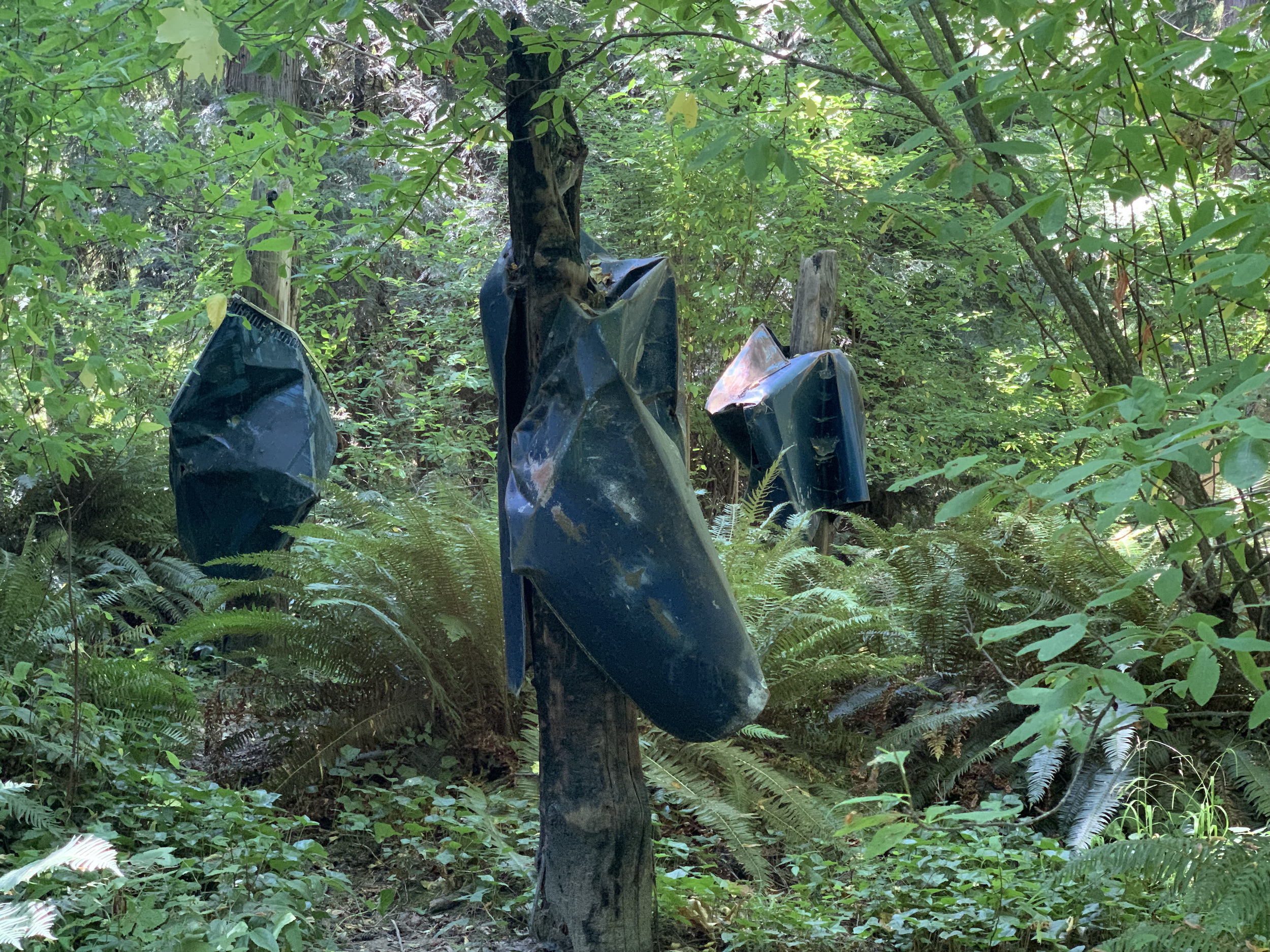 It’s Olympics season, but if this year the Summer Games feel a bit off — proceeding inside empty stadiums and under the cloud of COVID — there’s another way to capture the Olympic spirit: with a trip to the ancestral lands of the “strong people.”

The Olympic Mountains were named by British mariner John Meares, who passed through in 1788 and reportedly thought the craggy, snow-capped peaks looked like a fitting home for Greek gods. But of course long before he labeled it, Indigenous tribes inhabited the area, including the S’Klallam people in several villages along the Strait of Juan de Fuca.

Nuxsklai’yem (anglicized to S’Klallam) means “strong people,” and there are ample opportunities to learn about S’Klallam history and contemporary life as you travel along the peninsula in pursuit of art and culture.

In Port Townsend, for example, the čičməhán (or Chetzemoka) Trail, dedicated in 2019, is a self-guided interpretive route through the city with plaques sharing the Indigenous history of the region, including how S’Klallam tribes intersected with white settlers. It’s a powerful addition to a town where the layers of history are as visible as geological strata. (To wit: The myriad historic mural advertisements in a beautiful, slow state of fade on old brick buildings. Take the Vanishing Murals walking tour to learn about their origins.) 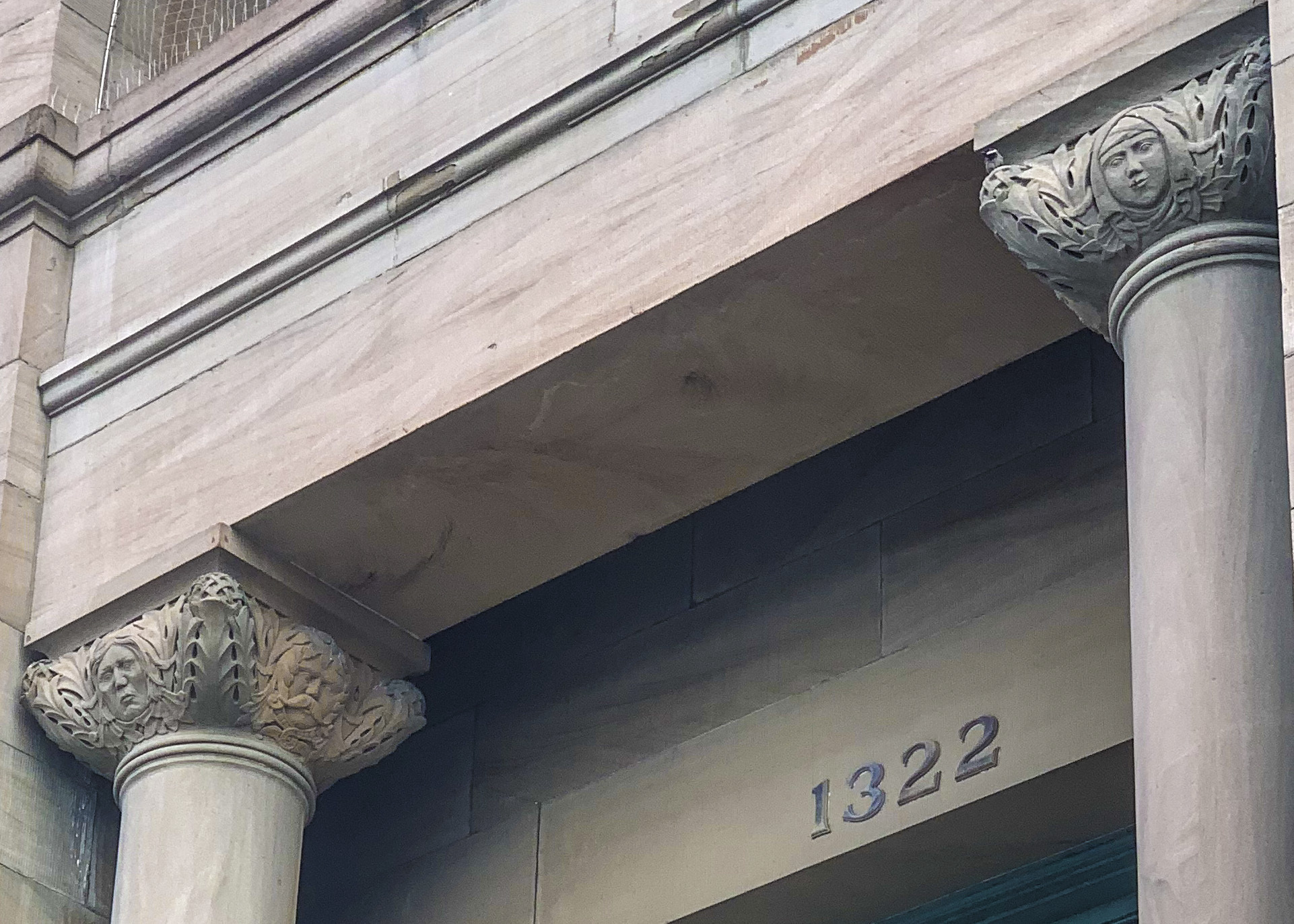 Built in 1893, the facade of the Port Townsend Post Office includes an homage to S’Klallam Chief Chetzemoka. (Brangien Davis/Crosscut)

Built in 1893, the facade of the Port Townsend Post Office includes an homage to S’Klallam Chief Chetzemoka. (Brangien Davis/Crosscut)

On my recent visit, I saw the Chetzemoka Trail signs all over — including at the Port Townsend Post Office, the imposing stone structure in the Uptown area, built in 1893. I was curious about the faces atop the Romanesque entry columns, and the plaque informed me they were original, carved into the civic building in homage to S’Klallam Chief čičməhán, his wives and his brother. A cultural crossover in plain sight.

While in Port Townsend, I stepped into the Jefferson Museum of Art & History, housed in the grand red brick structure built as City Hall for the boomtown seaport in 1892. (It’s slightly less grand now, as the pyramidical roof embellishments were removed in the 1940s because of disrepair.) It’s worth a stop to see the preserved Victorian architectural elements, as well as the allegedly haunted jail cells in the basement.

When I visited, the gallery space was hosting an impressive show of work by Port Townsend artist Peggy Smith-Venturi, whose incredible expanding boxes contain striking scenes of environmental warning. The next show continues the ecological theme, with locally based expedition artist Maria Coryell-Martin, who has been tracking the effect of climate change on the arctic with delicately dire ink and watercolor images (Aug. 5-Dec. 30). 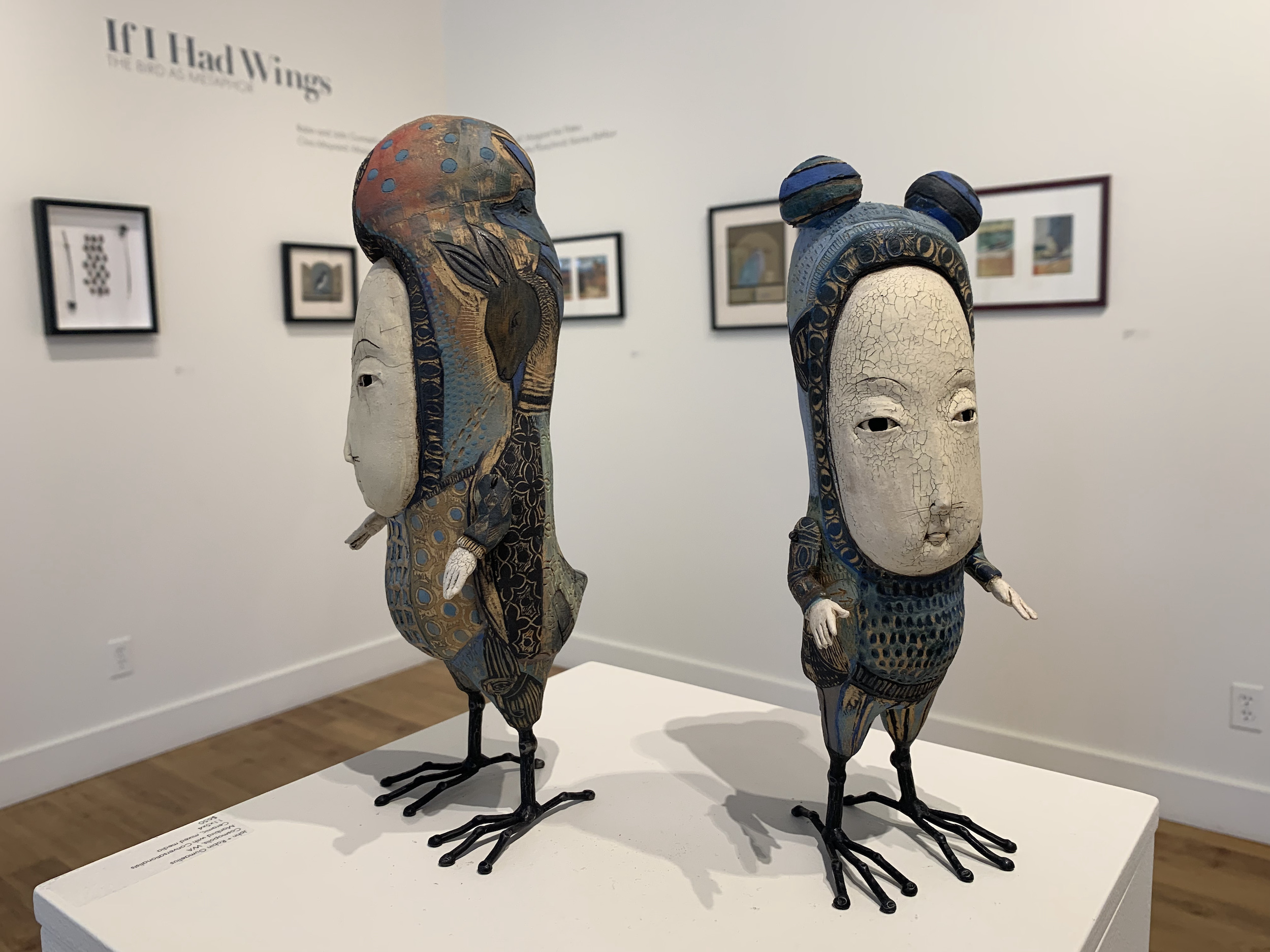 Across the street, near the city pier, Northwind Art beckons with its airy storefront gallery. Up now is an exhibit of avian strength: If I Had Wings: Birds as a Metaphor (through Aug. 29). A couple of my favorite moments in this wide range of winged works include the curious gaze of ceramic “manbirds,” by John and Robin Gumaelius of Cosmopolis, in Grays Harbor County; and the astounding precision of feathers sculpted into full scenes by Chris Maynard of Olympia.

And if you leave time to hike through the verdant trails at Fort Worden State Park, be sure to seek out Memory’s Vault (1988), a mossy monument in the woods. I had never seen it before — and as I noted in last week’s newsletter, there’s nothing I like better than finding art in unexpected places.

Nestled among evergreens, Richard Turner’s stark concrete sculptures are built on a barracks site of the Army Corps of Engineers, who from 1898 to 1907 constructed the artillery batteries at Fort Worden. (The vault where they hid the plans is still standing here.) Some of the columns are stamped with poetry by Sam Hamill (who died in 2018), founder of legendary poetry publisher Copper Canyon Press. The hard surfaces of the sculpture contrast with the soft lines of the poems and create a peaceful place of contemplation.

Consider these lovely lines from Hamill’s “A Lover’s Quarrel,” one of the poems included in Memory’s Vault:

Don’t tell me
about the seasons in the East, don’t talk to me
about eternal California summer.
It’s enough to have
a few days naked
among three hundred kinds of rain. 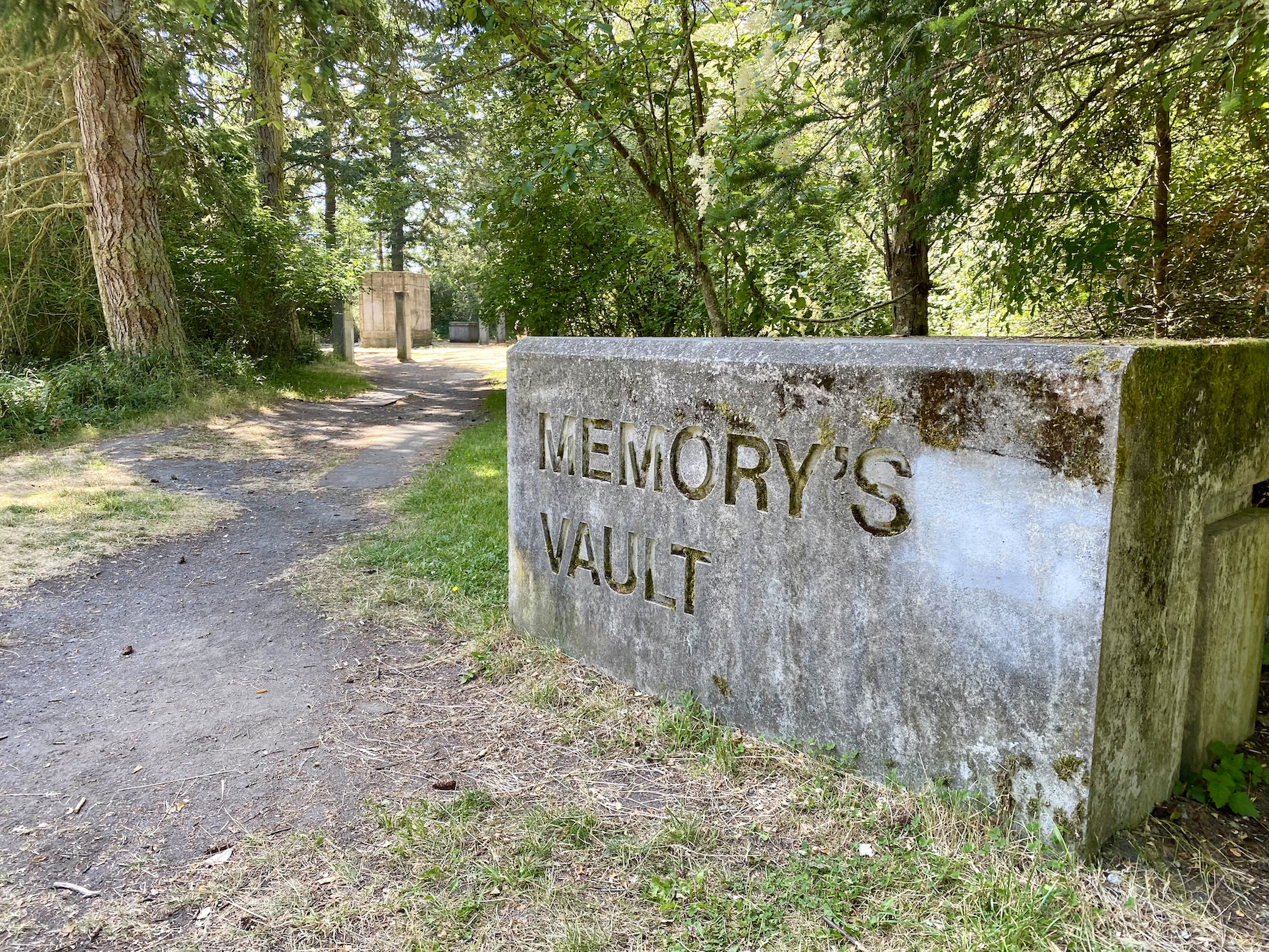 To continue your Olympic quest, head west toward Port Angeles. About halfway there is a perfect spot to stop, stretch and explore: the Northwest Native Expressions Gallery operated by the Jamestown S’Klallam Tribe. Featuring Native art and designs by regional tribal members and other Indigenous artists, the location also features a pretty, waterside plaza at the southern end of Sequim Bay, where the grounds are dotted with locally made carvings.

On my recent pass through the area, I picked up some timely trivia: Sequim is home to two Olympic gold medalists: rower Joe Rantz, of Boys in the Boat fame (who won in 1936), and skeet shooter Matthew Dryke (who won in 1984).

Port Angeles is home to wealth of murals as well — though these are less advertorial than historical, portraying the tribal, shipping and natural history of the area (plus a giant painting of the glorious old Kalakala ferry). Another thing that jumped out at me downtown: bilingual street signs, in both English and the Klallam language. 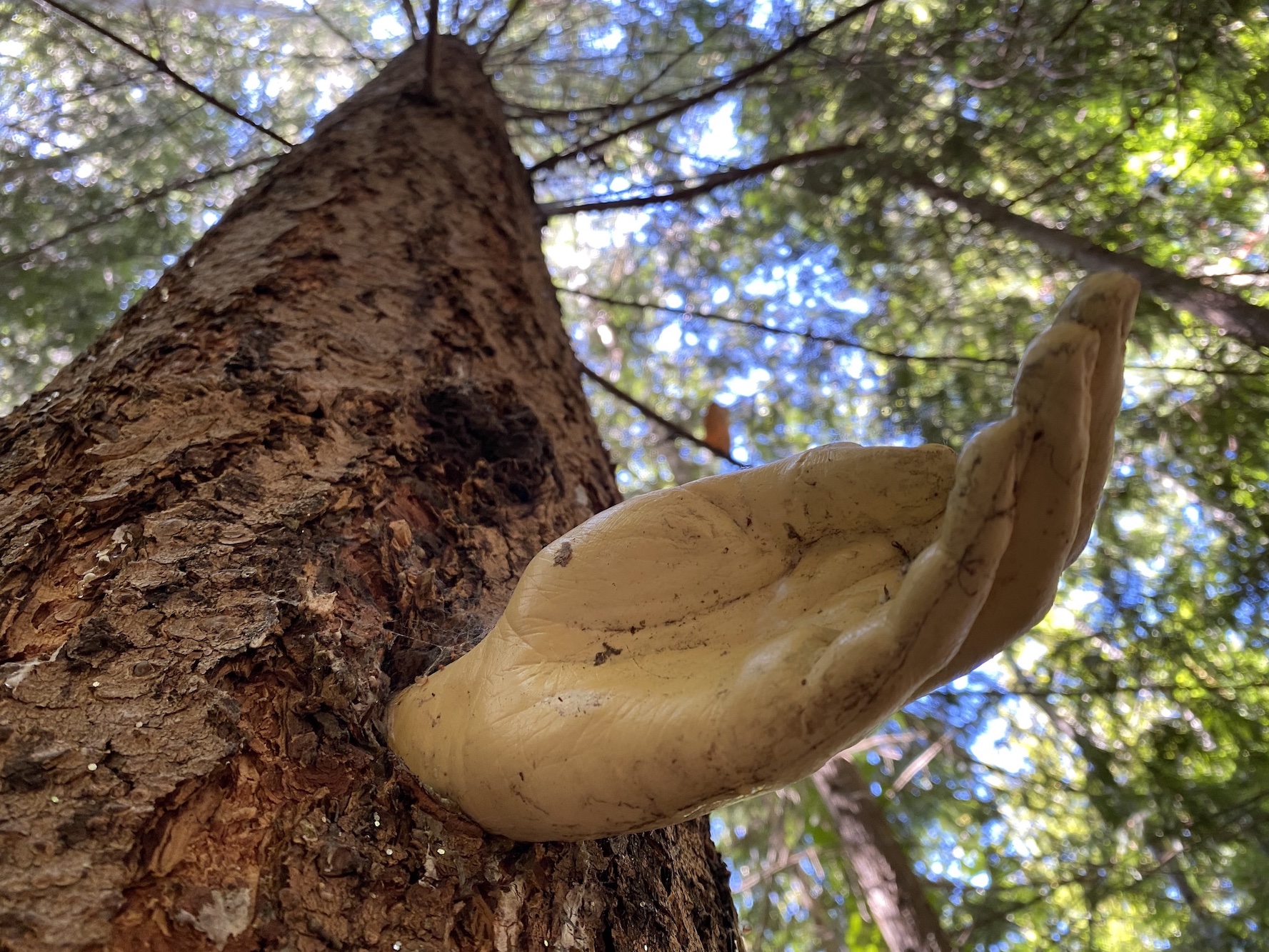 Near the Ediz Hook Spit and the Victoria ferry landing sits the still-in-progress Field Arts & Events Hall, designed by Seattle firm LMN Architects, which promises a 500-seat theater and a 1,000-square-foot art gallery, as well as a conference center and coffee shop. The opening date was delayed by COVID and is still TBD, but it sure seems exciting to have a performance and arts space on the working waterfront, right next to the Elwha Klallam Heritage Center.

But while the new hall isn’t open, there is a great place for arts exploration at the edge of town, in the Olympic foothills: the Port Angeles Fine Arts Center. Formerly a residence and artist studio designed in 1951 by Northwest architecture legend Paul Hayden Kirk, the Esther Webster Gallery hosts rotating shows in what was once a mod, curved living room with a soaring view of the Strait of Juan de Fuca.

The adjoining sculpture park — Webster’s Woods — is a treat, with 5 forested acres of art in and among the trees. Open year-round, it feels like an arts scavenger hunt, as some of the 75 sculptures are obvious and others blend into bark and branches. Seeking out art around every tree trunk feels loose and playful and perfect for a road trip. Once you’ve expanded your knowledge of the region’s cultural history — and found all the art on the map — call yourself an Olympic winner. 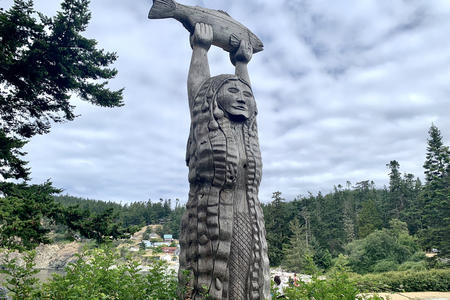 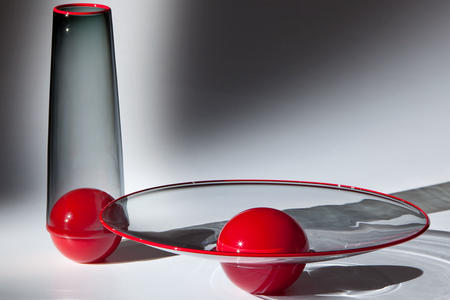