With a new movie fanning the flames of interest in the 1965 classic sci-fi novel, local singer-songwriters translate the epic saga into songs. 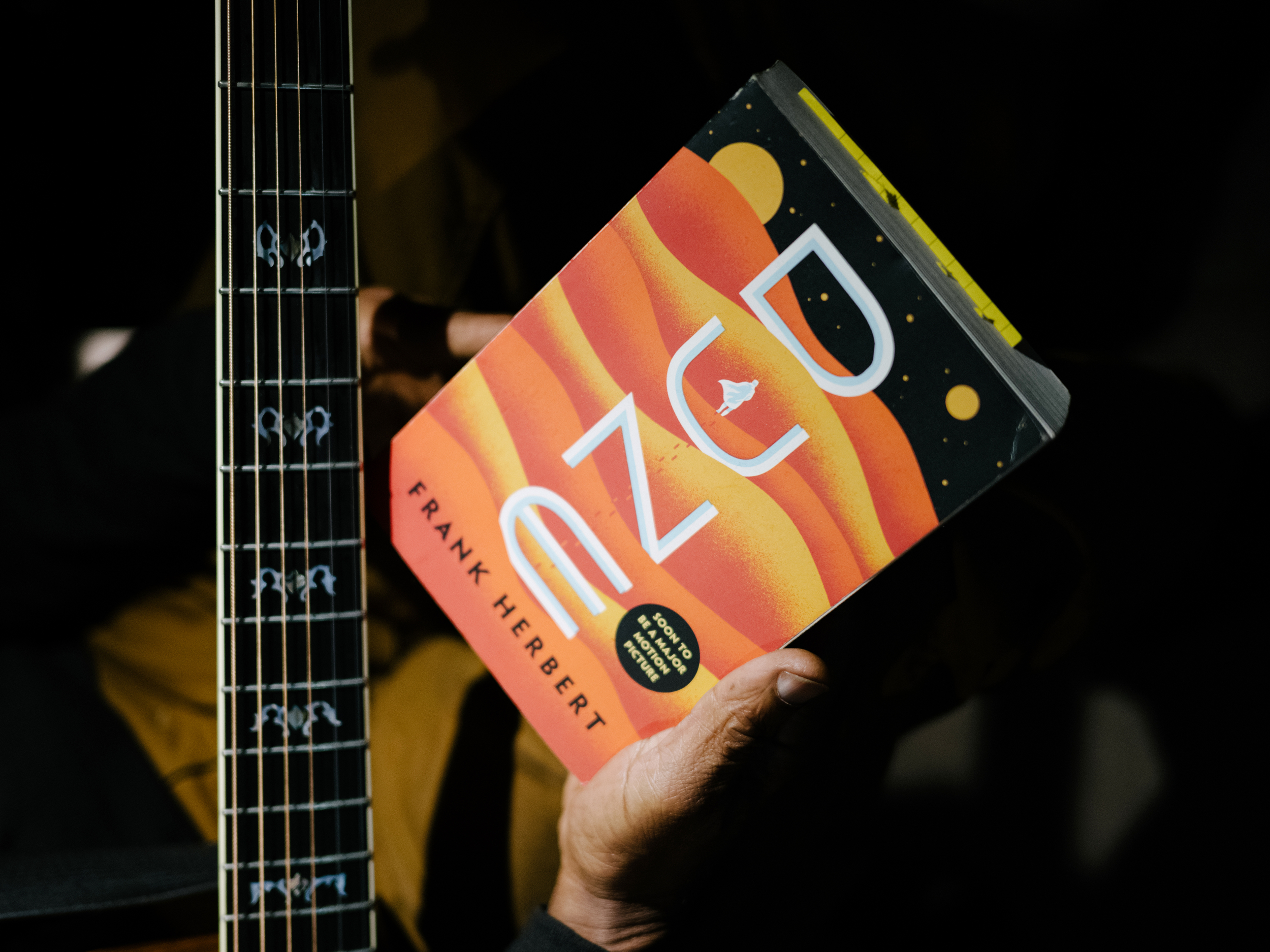 Musician Reggie Garrett holds a copy of Frank Herbert’s Dune while posing for a portrait in his home studio on Wednesday, Nov. 3, 2021. (Grant Hindsley for Crosscut)

Love. Politics. Perhaps a historical event or personal anecdote. When you ask musicians what inspired a new song, the answers often fall somewhere along these lines. But when you ask Seattle composer-pianist Michael Owcharuk, you get this: “The sounds of a desert planet with very harsh conditions, giant worms and a crazy drug everywhere you turn.”

Sci-fi fans don’t need much more to know what Owcharuk is talking about: Dune, the classic 1965 science-fiction saga by Tacoma-born author Frank Herbert. The book — one of the best-selling science-fiction titles of all time — centers on Arrakis, a fictional desert planet that’s home to giant sandworms, as well as the Fremen people, who cultivate the highly valuable “spice.”

In addition to being the source material for Denis Villeneuve’s long-awaited new movie, the novel is the inspiration for a night of brand-new indie songs created by local musicians for The Bushwick Book Club Seattle. This local branch of the New York-founded group commissions and stages original songs based on literary works.

Owcharuk is one of 10 local musicians who will perform brand-new songs Saturday, Nov. 13, at Town Hall Seattle (the show will also stream online) as part of Bushwick’s 12th season — which also features new music based on Brit Bennett’s The Vanishing Half and Alexandre Dumas’ The Count of Monte Cristo, among other books.

Dune was an obvious choice for the 2021-22 season, says Bushwick Seattle’s Executive Director Geoff Larson. “Not only is Frank Herbert local to this area ...there’s so many themes in that book that are so relevant to right now,” he says. “That’s kind of how sci-fi works: to tell the future for us, in a way. On the planet of Arrakis, water is a really big issue, religion’s a really big issue, colonialism ... along with drugs and addiction.”

In Herbert’s formative days, he could see the Asarco smelter stack spewing pollution in Tacoma. This sight — along with a visit to the Oregon Dunes — directly inspired the apocalyptic environmental vision at the root of Dune. At the new Dune Peninsula Park in Tacoma, built on a former Superfund site, a plaque near a sandworm sculpture explains: “Created on top of the leftover rock (slag waste) from the Asarco smelter, this park was named for Frank Herbert’s book Dune, which illustrates via fable the folly of taking the natural world for granted.” 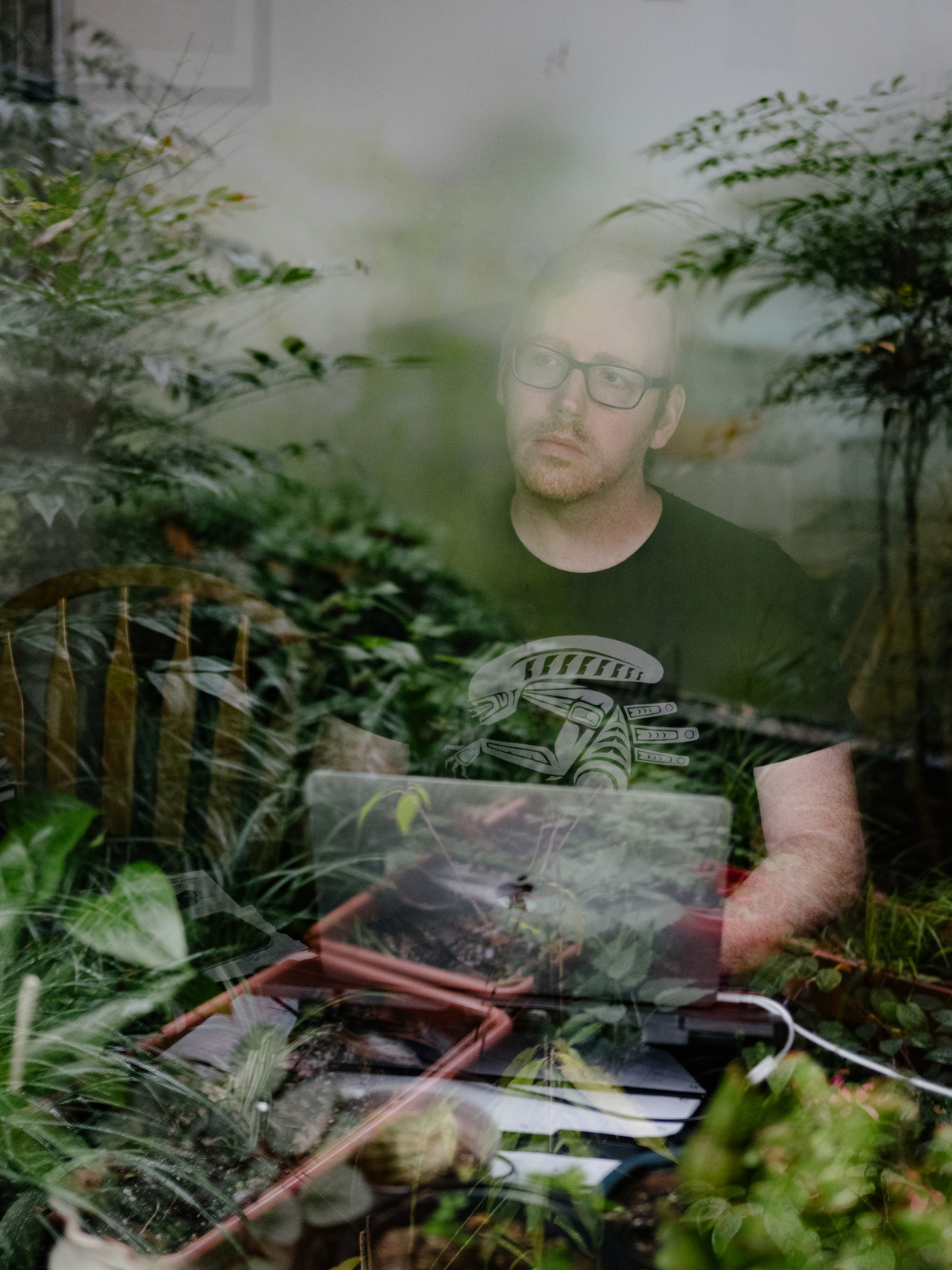 The Bushwick show is timely for another reason: It coincides with the recent release of the blockbuster adaption of the book by the French-Canadian director Villeneuve. The film surpassed box office expectations and fanned the flames of interest in the “Dune-iverse,” with longtime fans and newbies alike (re)visiting the book and its following volumes, as well as the previous (but less appreciated/camp classic) 1984 film adaptation by David Lynch.

Though it takes some liberties, the epic, 2½-hour-long movie does a good job of introducing viewers to the basic tenets of the complicated saga. The gist: It’s the year 10,191 when the young Paul Atreides (Timothée Chalamet) — the chosen son of an interstellar monarchy — travels to Arrakis with his family and army to take control of the planet. This involves warring with the ruthless Harkonnen for control of the “spice” trade, evading giant sandworms and crossing paths with the Indigenous people of Arrakis, the Fremen, who live in “sietches,” villages set in the desert rocks. But Paul is also grappling with his fate, which becomes apparent to him in dreams and seems intertwined with a mysterious Fremen woman, Chani (played by pop star and actress Zendaya).

With gorgeous, desolate desert settings, Hollywood star power, intricate costumes and a whole bunch of CGI, Villeneuve has made Arrakis somewhat tangible without losing much of the book’s mystical, near-biblical qualities.

But that’s a 2½-hour movie — which covers only half of Herbert’s first Dune title (a sequel covering the second half of the book is in the works). How do you translate the book’s intricacies into a three-minute song? What if sound is your only medium? No CGI, just a sax or a viola?

“My initial instinct is to create a sort of soundtrack for Arrakis,” says Owcharuk, the pianist-accordionist. “… What would the music of the Fremen in their sietches sound like?” Owcharuk is opting for his trusted piano, and his own vocals, which he’ll layer over some prerecorded, electronic ambient samples to evoke a sense of arid emptiness.

The Bushwick program is known for having an indie, singer-songwriter feel, and Owcharuk is one of few performers opting for futuristic tunes. Musician Chris Poage is putting himself in the shoes of a spice miner on Arrakis, singing a solo accordion song, and others are evoking the harsh desert with sax, viola, guitar and bass.

One performer, writer Evan J. Peterson, will use only his voice: He’ll perform a spoken word poem inspired by the Bene Gesserit, the secretive, pseudo-religious super-powered sisterhood of spies, nuns and scientists who pull strings behind the scenes in Dune. “What I love most about them is that they are terrifyingly powerful and they do not need to flaunt it,” he says. Like them, Peterson’s power (the spoken word) may seem less obvious than brute force (of a movie or electric guitar) but it is mesmerizing. 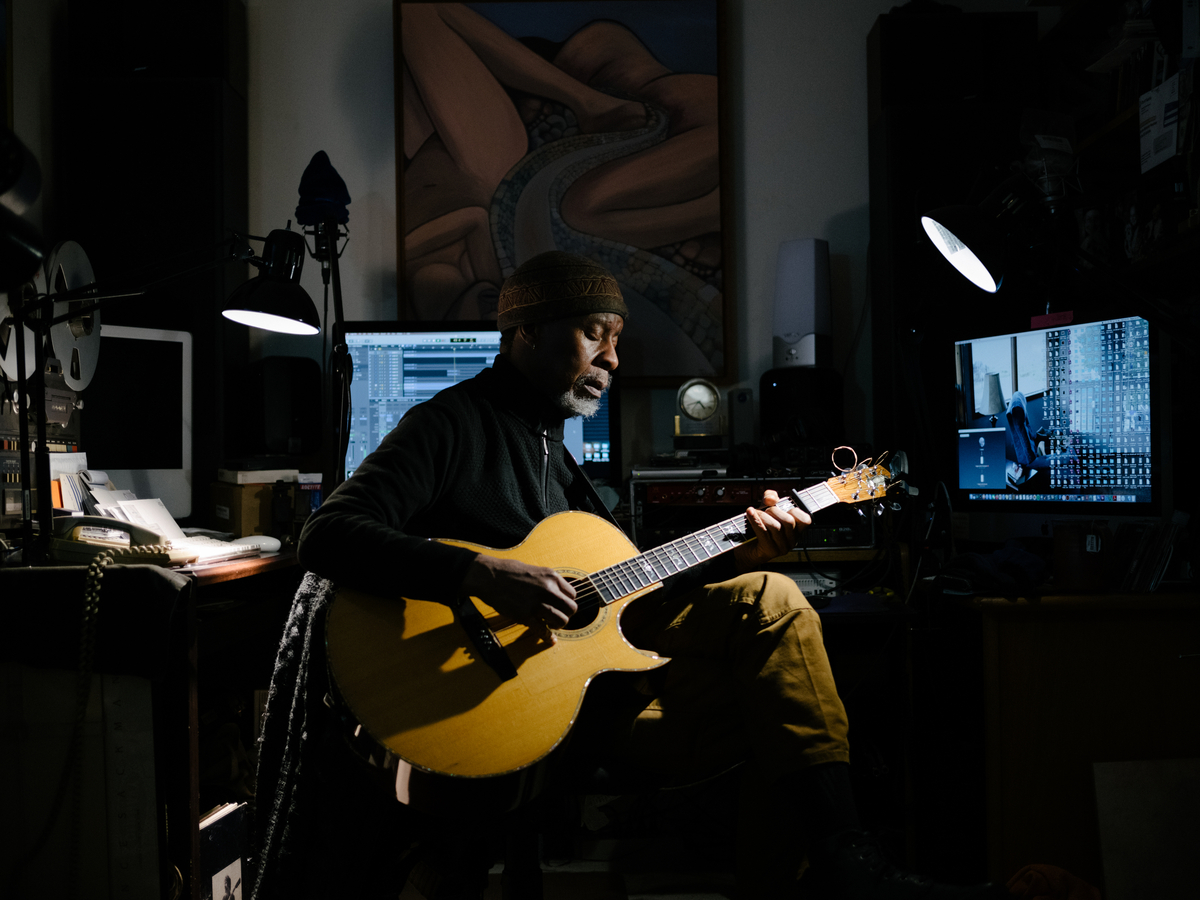 Michael Wallenfels, a longtime Seattle busker and Bushwick performer, read Dune for the first time in preparation for the show and found it to be “great source material for music.” He is going semiacoustic, with some digital instrumentation backing him up on the guitar. While uptempo, his song, “Road To Take,” is set in a minor key to convey despair. “The narrator of the song feels backed into a corner, and I try to capture that musically with a slightly menacing chord progression and anguished vocal delivery,” he says.

“The theme of my song is essentially decision paralysis,” he continues. “Paul Atreides develops an ability to see the branching paths of the future — some lead to his death, some lead to his becoming worshipped like a god, and so on. The song tries to pull apart the tension between infinite possibility and psychic paralysis.” Wallenfels illustrates this with a chorus that begins, “How do I find my way / if I’m where I need to be? / How do I make my escape / if I’m already free?”

Like Wallenfels, several performers are leaving behind the epic nature of the book to zoom in on the interpersonal — or internal — and psychological tensions.

“My tune focuses on the relationship between Jessica and her son, Paul,” says local singer-songwriter Intisaar. “I explore Jessica’s journey of submitting to and ultimately rebelling against systemic oppression.” Intisaar will perform a slow-paced, minor-key, slightly mystical folk-rock song on her 12-string Martin acoustic guitar. 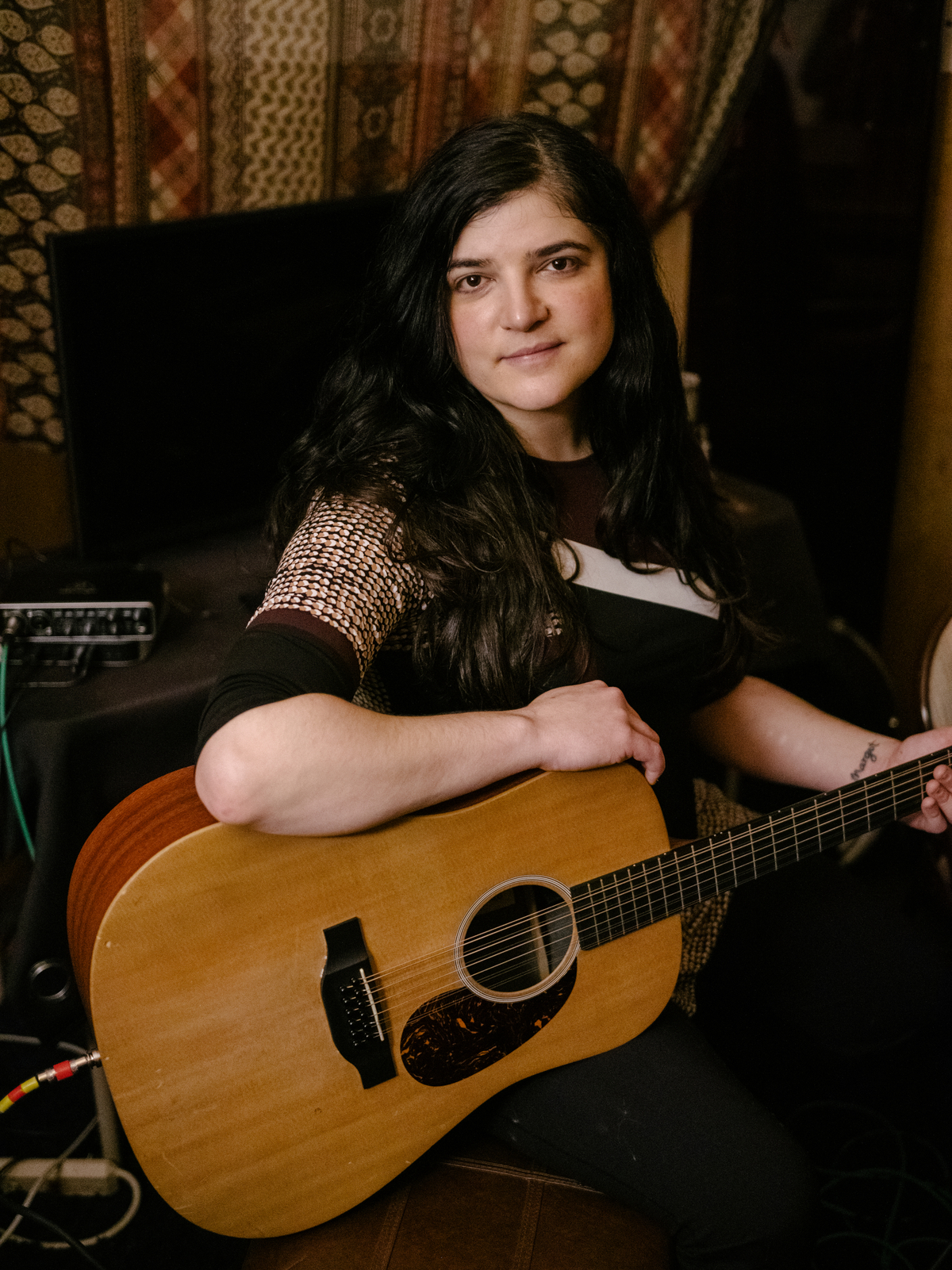 Intisaar Jubran poses for a portrait while rehearsing her ‘Dune’-inspired guitar piece on a 12-string in her Belltown practice space for the upcoming Bushwick Book Club Seattle performance at Town Hall. (Grant Hindsley for Crosscut)

Intisaar Jubran poses for a portrait while rehearsing her ‘Dune’-inspired guitar piece on a 12-string in her Belltown practice space for the upcoming Bushwick Book Club Seattle performance at Town Hall. (Grant Hindsley for Crosscut)

“Almost anything about human relations is fodder for a song,” says longtime Seattle guitar player and songsmith Reggie Garrett. The Bushwick show marks one of the few times he’s written a love song in his three-decade career. “It’s a love song between and among Paul and Chani. It includes things that could reasonably be assumed he might say to her, and she might say to him,” Garrett says.

Soft the morning light
Time suspended
Waiting to be born
This breath held in darkness
So long, that faith near descended into naught

Garrett first read Dune in college and picked it back up for the Bushwick show. “From a songwriter’s perspective, it’s kind of slick,” he says. “It forces me to think about and write very different kinds of things than I probably normally would — which has to be something that helps me as a writer.”

In addition to gaining new inspiration, Garrett says just reading the book again was a treat: “I enjoyed the hell out of it.” 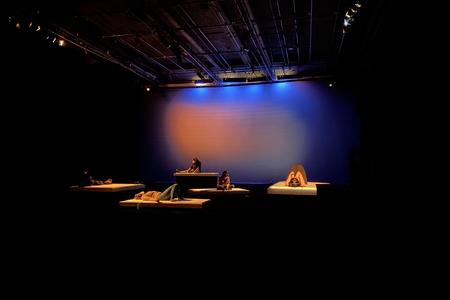 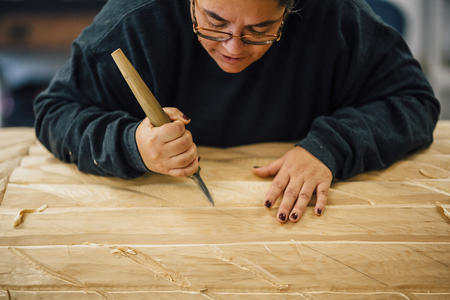 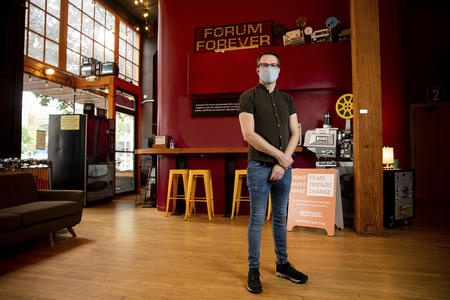