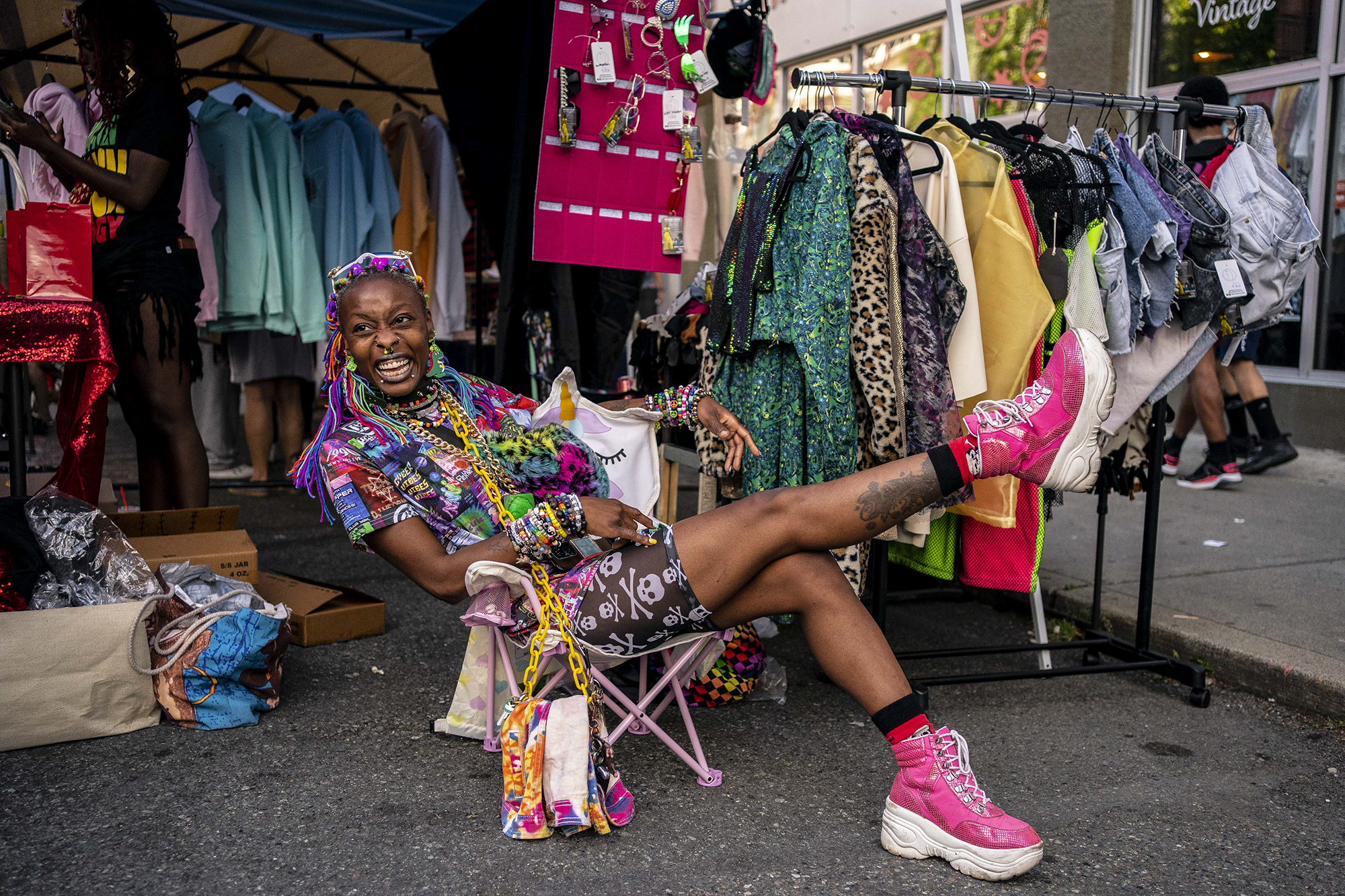 Stylist and designer Andreya Taylor poses for a portrait during the Forever Safe Spaces “Audacity to Ask” event on Capitol Hill on June 3, 2021. The art, music and community event was a fundraising drive for Forever Safe Spaces, a coalition started during the pandemic to advocate for funding for the local creative community. Some members of the coalition have advised on the creation of Hope Corps. (David Ryder/Crosscut)

With so many concerts, gallery shows and live performances blooming this spring, it may seem like the cultural sector has bounced back after a devastating two years. But not quite. In Seattle, the number of jobs in the arts, entertainment and recreation sector — which encompasses a wide swath of jobs including dancers, sound engineers, museum administrators and sports and theme park professionals — is still nearly 25% below pre-pandemic levels. As the cultural advocacy nonprofit Americans for the Arts put it in a recent report: “Artists [and] creatives were — and remain — among the most severely affected segment of the nation’s workforce.”

In an effort to combat the unemployment and underemployment of creative workers, the city of Seattle’s Office of Arts & Culture is launching a program that will put artists to work. Inspired by the New Deal’s Works Progress Administration, which put artists on the national payroll during the Great Depression, ‘Hope Corps’ promises to pay roughly a hundred local arts workers “living wages” to organize projects that bring the community together. The $2 million program will employ local creatives for up to 12 months, allowing each person to earn up to $30,000. (The program does not offer benefits like health insurance and is not intended to provide full-time employment.)

The goal is simple: Putting creatives to work again, says royal alley-barnes, acting director of the city’s Office of Arts & Culture, or ARTS. “The pandemic broke us in many ways — not simply in our creative arts, [but also] in our mental health, in our ability to heal,” she says. “Getting our creative workforce from surviving to thriving to flourishing totally impacts the entire civic nature of who and how we are — it creates social cohesion.”

ARTS' alley-barnes describes the program, in the works since 2020, as a win-win wherein the employed artists will create benefits for the whole city by offering free music, theater and art courses and by creating new works of art, projects and festivals that bring the community together.

The move comes amid a pandemic-induced nationwide discussion about the precarious economic position of cultural workers and the role of state patronage of the arts as a tool for recovery and social cohesion. “It's a national movement,” alley-barnes says.

This story is part of a series called Reviving Seattle Arts

Hope Corps — funded with a $500,000 grant from the National Endowment for the Arts’ American Rescue Plan and $1.5 million from the city’s new JumpStart Seattle payroll tax — follows in the footsteps of similar pandemic recovery programs launched in New York, San Francisco and other, smaller U.S. cities. Artists At Work, a public/private partnership, is running similar programs in western Massachusetts and Los Angeles.

The program also takes after a much older economic relief program: the New Deal-era Federal Project Number One, a four-year project established in 1935 as a subdivision of the Works Progress Administration. The project was meant to provide relief for the unemployed by hiring Americans to carry out public works projects during the Great Depression. “Federal One,” as it became known, put artists (including the now-illustrious Jackson Pollock, Mark Tobey, Jacob Lawrence and Zora Neale Hurston) on the national payroll to staff community centers, write books, create plays and paint murals in post offices, courthouses and school buildings across the nation.

But Hope Corps is different in scope in that it is not a federal but a city project and much smaller in scope: 100 creatives is just a small fraction of the city’s thousands-strong creative workforce and, for now, the program will provide work for only up to 12 months. The city also won’t employ artists directly, but will award grant money to various artists, arts groups and larger organizations, who can then pay individual artists to make projects come to life.

The city is earmarking $1 million for grants to projects that check a few boxes: address one of Hope Corps’ focus areas (public health, mental health and healing, food security, storytelling, social connection and belonging, and arts education); employ local creatives; and engage with underrepresented communities, among other requirements. The grant application process will open later this month, with the first projects potentially starting this fall. 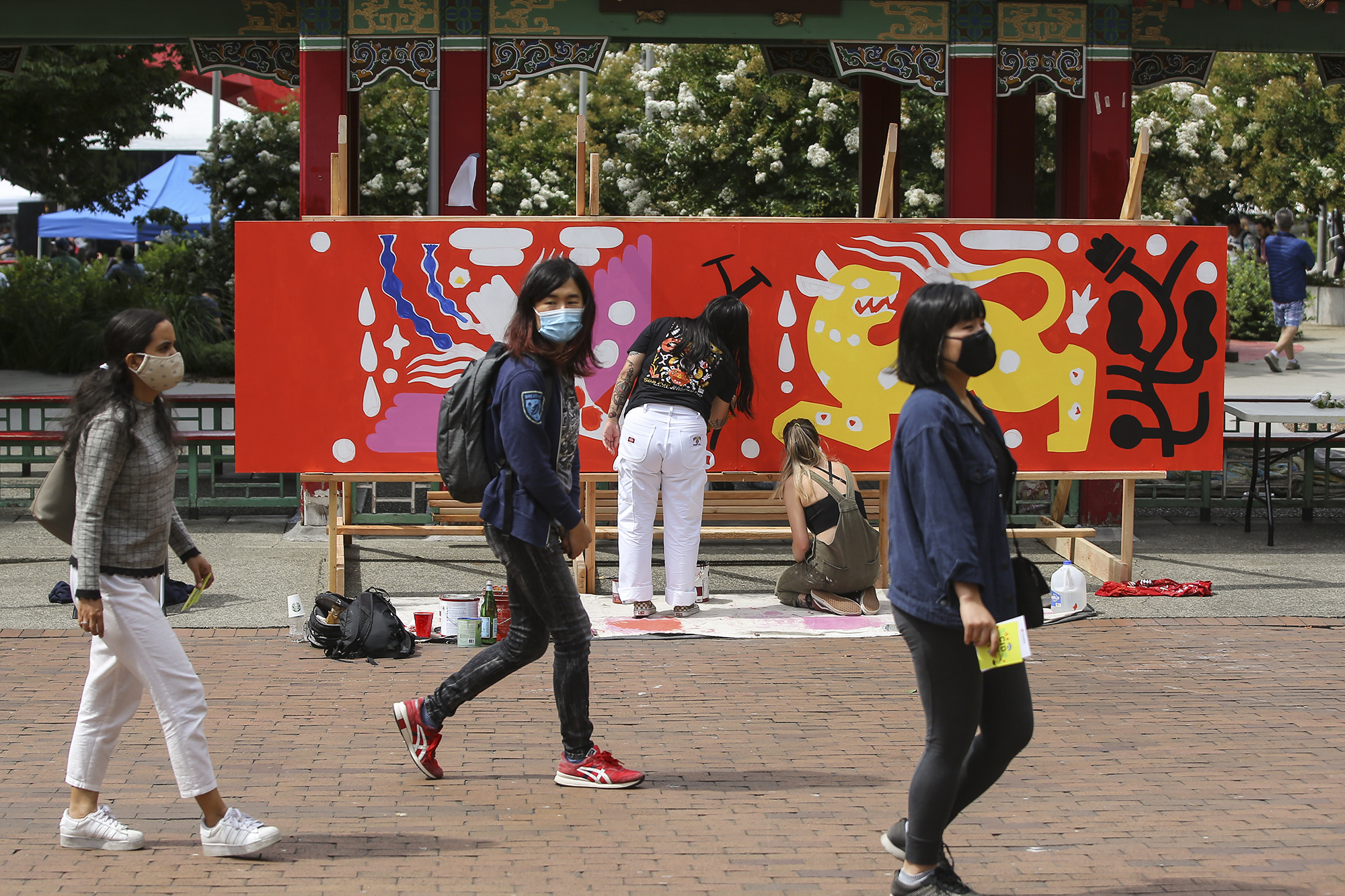 Artists Stevie Shao and Glynn Rosenberg paint a mural in Hing Hay Park during the Chinatown-International District Celebration, Aug. 7, 2021. Art projects like murals or festivals could be among the initiatives to get funding from Seattle's new Hope Corps program. (Genna Martin/Crosscut)

Artists Stevie Shao and Glynn Rosenberg paint a mural in Hing Hay Park during the Chinatown-International District Celebration, Aug. 7, 2021. Art projects like murals or festivals could be among the initiatives to get funding from Seattle's new Hope Corps program. (Genna Martin/Crosscut)

A smaller portion of the funds, $250,000, is going toward Hope Corps’ subprogram “Beloved.” This multimedia and arts campaign, in partnership with King County and local organizations, is slated to explore the history of (as well as solutions for) gun violence. (Hope Corps' remaining $750,000 has yet to be allocated). The Beloved program started earlier this year, with roughly 24 creative workers currently producing essays, livestream events, exhibitions and public art installations on the topic.

“Just looking at the impact of the $250,000 for the Beloved project —  that is 24 creative workers actually employed,” alley-barnes of the Office of Arts & Culture says, adding that it also paid stipends to local youth participating in the project through the local nonprofit Creative Justice. “That makes a real difference.”

One of those two dozen workers is Julie Chang Schulman, a longtime local arts and community organizer involved with Seattle Independent Artists Sustainability Effort, Forever Safe Spaces and other artist coalitions. Chang Schulman, known as Julie-C, helped advise the city with the envisioning of the Hope Corps program and is also helping Beloved bring local exhibits and events to life.

The program’s inaugural public art installation consisted of 1,405 roses — one for each incident that involved shots fired in King County last year — suspended from the ceiling of Capitol Hill art space 206 Liminal. Various walls of pink, red, orange and yellow roses formed protective booths that visitors could add roses to or sit in to discuss their experiences with gun violence, which were recorded as part of the multimedia aspect of the event. The one-night event also included an exhibit by local artist Soulma Ayers (who received a stipend for creating the exhibit) consisting of three small coffins full of shell casings and roses.

The next day, Beloved artists placed the roses on a walkway that stretches over Aurora Avenue North, one block from the mural of Charleena Lyles, the pregnant Black mother who was shot and killed by Seattle police in 2017.

“Ultimately, all of this is about changing how cultural labor is valued economically. For the most part, creative industries are built ... around an exploitative system that is well-compensated if you are able to produce for a corporation,” Chang Schulman says. “We want people to be able to live doing what they love … [but] it doesn't have to be such a sacrifice.” 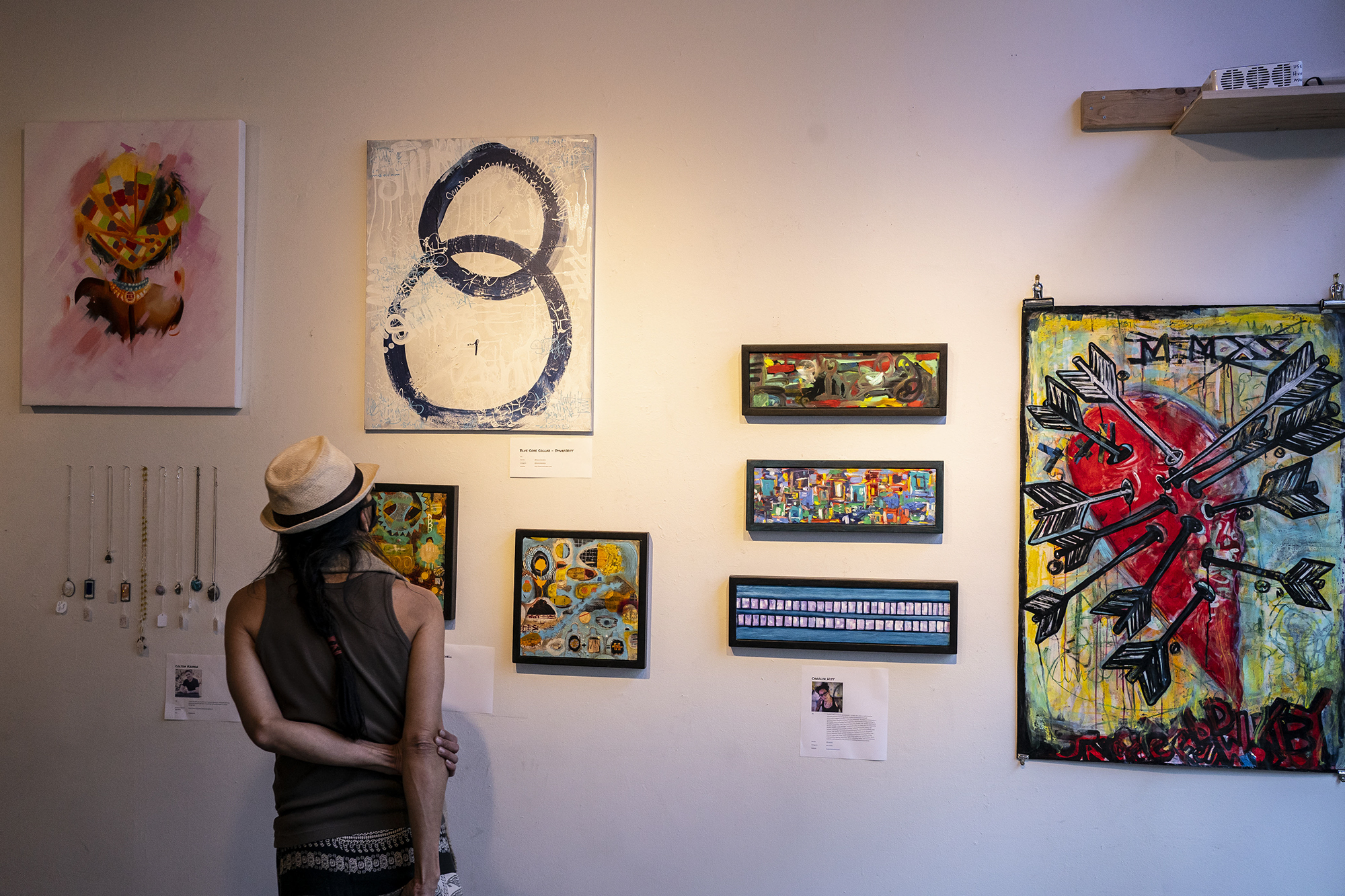 An attendee views work at the Vermillion art gallery during the Forever Safe Spaces “Audacity to Ask” event on Capitol Hill on June 3, 2021. (David Ryder/Crosscut)

An attendee views work at the Vermillion art gallery during the Forever Safe Spaces “Audacity to Ask” event on Capitol Hill on June 3, 2021. (David Ryder/Crosscut)

This precarity — and the lack of a security net for artists — was endemic to the cultural sector before COVID-19. The pandemic, many arts advocates say, merely exposed and exacerbated the sector’s preexisting conditions of inequity and scarcity.

A UNESCO report published earlier this year rang the alarm bell: COVID has induced “an unprecedented crisis in the cultural sector” with artists finding it harder than ever to make a living, despite being part of one of the fastest-growing industries.

That’s true for Seattle as well. A 2019 “Creative Economy” report commissioned by the city said growth in creative occupations — which included anyone from software developers and game designers to photographers, craft artists and designers — was outpacing overall job growth. But that number, the report showed, camouflaged a significant bifurcation. While the city was home to the highest-paid computer workers in the nation, its arts workers were the lowest-paid in the country.

Then the pandemic hit. In Seattle alone, the arts, entertainment and recreation proportionally lost more jobs than any other sector, nearly 60%, according to data from​​ the Washington State Employment Security Department. While a portion of those jobs has come back, the numbers are still down nearly 25%.

That 25% represents roughly 8,000 jobs, not counting the many independent artists who rely on gigs and freelance work (and whose pandemic unemployment assistance lifeline has long run out). Hope Corps, aiming to employ about 100 artists, will barely scratch the surface, especially compared with similar programs like New York’s $25 million City Artists Corps, which sent grants to 3,000 artists. Still, says alley-barnes: “Each life that it impacts is important, so it does make a dent. Is it going to be sufficient? Absolutely not.”

That’s why alley-barnes says the Office of Arts & Culture is hoping to expand the program with additional funding, potentially through grants from various foundations, as well as donations from the public. Ideally, the program would have a longer shelf life and persist beyond the pandemic, she says. “My philosophy is that this should be a 10-year funded [program],” alley-barnes says.

She points to the groundswell of Hope Corps-like programs across the country as proof of a broader mental shift that could allow the program to continue. In California, a creative job corps could be funded through state appropriation this year. On a federal level, there is currently more proposed legislation related specifically to creative workers and the creative economy than ever before in U.S. history, according to Americans for the Arts.

Many of the bills under consideration aim to put artists back to work, most notably the Creative Economy Revitalization Act. The bipartisan workforce bill could authorize $300 million in grants to pay local creative workers through public projects like festivals, performances, public art and more.

“When Americans for the Arts talk about putting creative workers to work again, it means that they are recognizing that WPA-type opportunities worked and created monumental opportunity and longevity in careers,” alley-barnes says.

“It also knitted back the fabric [of our society],” she says. “It’s the artists who keep that civic fabric unwrinkled and … beautiful and flourishing.”

This story has been updated to reflect that the Hope Corps program is not intended to provide full-time employment.