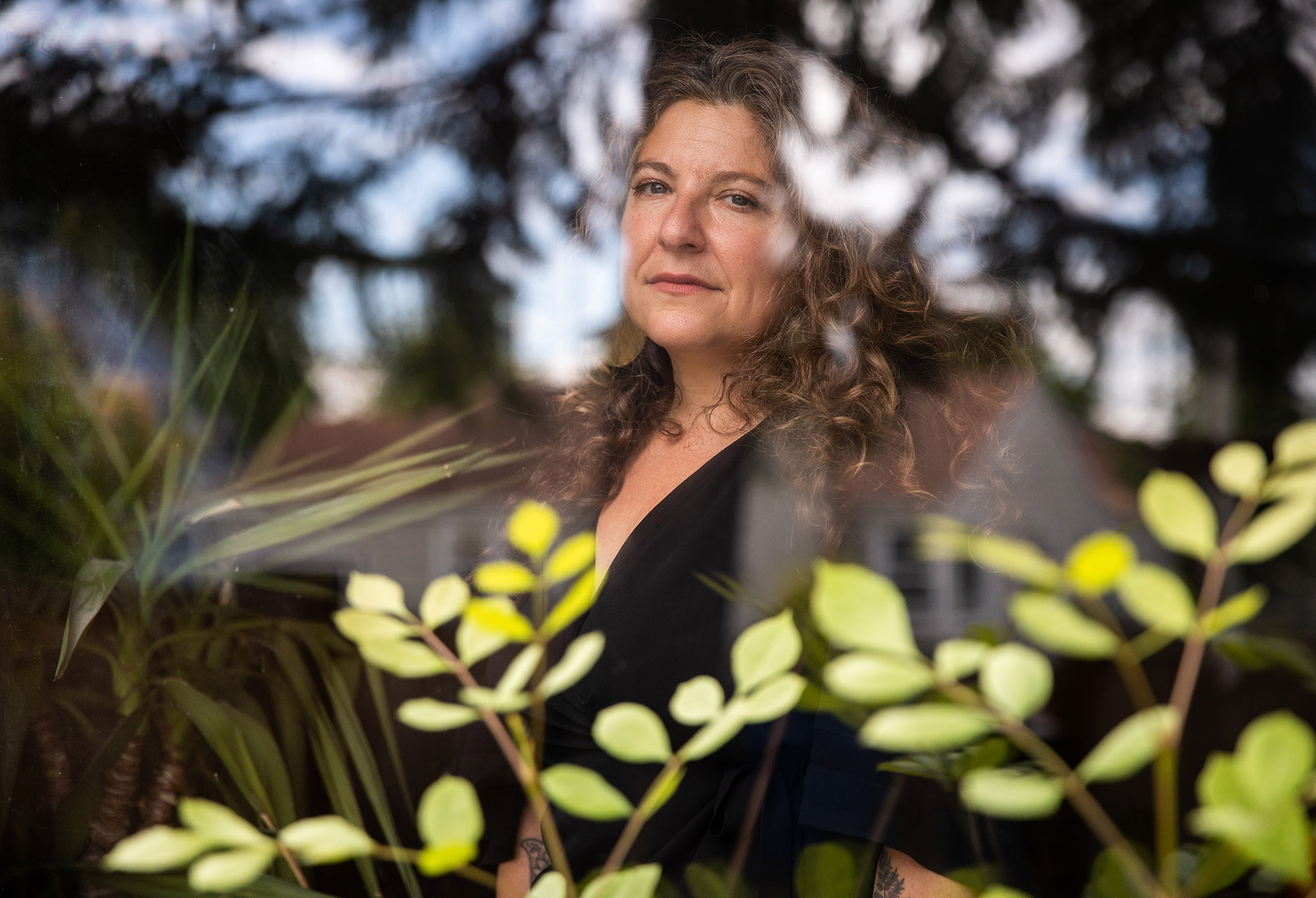 Amie Newman, who works as an abortion doula on a volunteer basis, at her home in Seattle on June 6, 2022. (Amanda Snyder/Crosscut)

Kels Rizzo’s first glimpse into their future as an abortion doula began with firsthand experience.

They remembered being in a room with another patient in the early 2000s, the two of them awaiting their abortions. Rizzo held hands with the patient, who was crying, and assured them they would be OK.

“We had just kind of a moment of shared comfort before we went to get our own procedures,” they said.

Today Rizzo, who is studying geography and labor studies at the University of Washington, spends some of their free time as an abortion doula.

Workers in this field like Rizzo, who has undergone training through Birthing Advocacy Doula Trainings, can help people wanting to end their pregnancies by providing information about the abortion process; offering massages and meditation; and helping them meet other needs, including child care or meal planning.

These services, which some people provide through their own doula practices, may be especially crucial after the U.S. Supreme Court’s conservative majority overturned Roe v. Wade on June 24, giving states the power to determine the legality of abortion. The decision marked a victory for some and a death knell for others, particularly in states slated to prohibit abortions. Washington law protects abortion rights, though the state may see residual impacts from Roe’s fall.

The Guttmacher Institute estimated that the number of women of reproductive age whose closest abortion clinic would be in Washington could skyrocket by up to 385%. To prepare, Gov. Jay Inslee approved $1 million to ease the impact of increased demand on reproductive care clinics. Roe’s demise left some Washington abortion doulas reflective about how they can support people who want to end their pregnancies but live in states with abortion bans.

Volunteer abortion doula Amie Newman called the decision “a gut punch.” Like Rizzo, she spreads the word about her services through her personal networks so pregnant people know they can turn to her for help at no cost. As a volunteer, Newman’s guidance can range from sharing information about where people can order abortion pills to connecting individuals with the Northwest Abortion Access Fund for financial help.

Newman gets questions related to abortion every few weeks, though she occasionally works with people more in-depth every couple of months. She said she has recently noticed an uptick in people asking her questions, like where to access abortion pills and emergency contraception.

The reversal of the landmark decision, which first became law nearly 50 years ago, drew widespread criticism. In a Pew Research Center survey of more than 6,000 Americans, nearly 60% of respondents disapproved of the Supreme Court’s decision to overturn Roe, while 62% believed abortion should be legal in most or all cases. 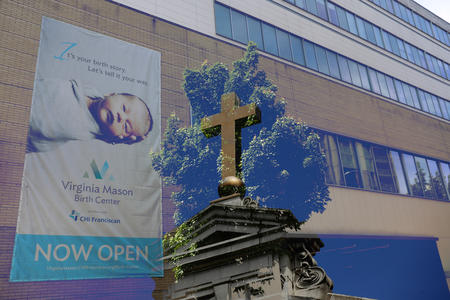 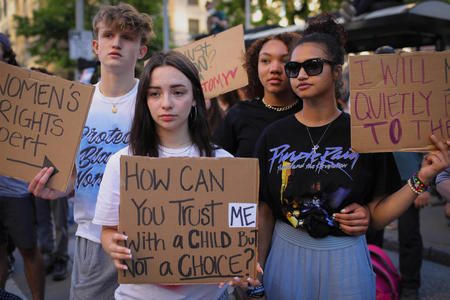 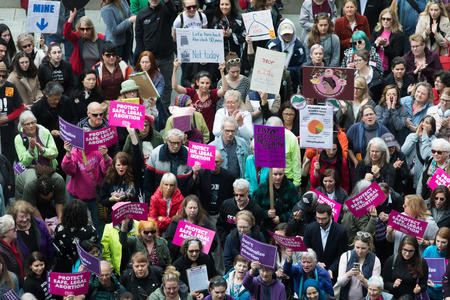 Those who identify as Native American, Native Hawaiian, Pacific Islander or Alaska Native can also work with Hummingbird Indigenous Doulas in Washington. The program gives Indigenous community members an opportunity to connect with full-spectrum doulas, who can help them navigate births and abortions.

“Indigenous people have always had the ability to end a pregnancy when we want to or to get pregnant when we want to,” said Camie Goldhammer (Sisseton-Wahpeton). “Our ancestors and chiefs signed treaties ensuring our right to sovereignty and that includes our bodies.”

The team at Hummingbird offers services and support similar to those of other abortion doulas, while also operating from a culturally relevant perspective. This means Hummingbird doulas act as “aunties” to ensure clients are safe and comfortable. They also offer clients medicines like blood-building syrup to help them regain their strength or a white pine drink traditionally used as a grief tea.

Goldhammer, Hummingbird’s executive director, said she saw the overturning of Roe’ coming, but maintained some optimism that it might not happen.

“We’re pissed,” she said.  “We’re really scared for our relatives in other states.”

Who abortion doulas fear for most

Although the Supreme Court decision impacts all birthing people, people of color face some of the greatest threats.

“Roe should have been the floor in terms of abortion access, not the ceiling,” Newman said. “Abortion has not been accessible for so many people in our country.”

People of color have disproportionately higher rates of abortions in states that have banned the procedure, including Alabama, Louisiana, Mississippi and Texas. Black and Hispanic communities in these states face higher rates of poverty than white communities, according to 2019 data from the Kaiser Family Foundation.

Laurie Bertram Roberts, executive director of the Alabama-based Yellowhammer Fund, told The Associated Press that limited health care access and “a lack of choices for effective birth control” play into these disparities. According to Roberts, these individuals, who are often poor, will likely have the most difficulties traveling across the U.S. to end their pregnancies or affording the costs of raising children.

In the Pacific Northwest, a first-trimester abortiont costs $650 on average, according to the Northwest Abortion Access Fund, a nonprofit that helps people afford their abortion care.

Depending on one’s insurance, paying for abortion care can be difficult. Goldhammer of Hummingbird Indigenous Doulas pointed to the Hyde Amendment, which went into effect in 1980. The amendment restricts federal funding for abortion services, impacting people insured through Medicaid, Medicare and the Indian Health Service. (Washington covers abortion services through its Medicaid program.)

Unless Indigenous people have private insurance, they are typically covered by the federal government, Goldhammer said. She said Hummingbird could support people coming to Washington to end a pregnancy in different ways, from helping out financially to getting them a place to stay.

Despite the national focus on states like Texas as antagonistic to reproductive rights, Rizzo, the UW student, emphasized thinking beyond the conservative-liberal binary.

“Washington state is flawed, just like anywhere else,” Rizzo said.

Getting down to business

Doulas are currently in an information-gathering stage, according to Rizzo. This means understanding how medical institutions could impact their work.

“Not all doulas go and do hospital births,” Rizzo said. “But for those of us that do interact with hospitals, knowing where they stand is important.”

About half of Washington’s hospitals are affiliated with religious groups, leaving “a patchwork of reproductive health policies that vary by hospital, [that] can leave patients confused or without care altogether,” Megan Burbank reported for Crosscut.

Following the overturning of Roe, some abortion supporters posted coded language on social media inviting people to “camp” with them, implying they will help people trying to end their pregnancies. This trend drew pushback from those who viewed it as risky, ineffective and performative. Planned Parenthood Toronto asked the public to stop inviting people to their houses and encouraged supporters to back existing networks, rather than creating separate ones.

As an abortion doula, Newman wants to familiarize herself with the legal landscape in different states to better support clients, whom she plans to help regardless of legal repercussions. Since Roe’s fall, she said, she has observed a sense of fear among current and prospective abortion doulas, but also dedication.

“People who are essentially like, ‘OK, let’s get down to business,’ ” Newman said.

A world after Roe v. Wade

President Joe Biden signed an executive order last week to safeguard access to abortion medication and emergency contraception in the wake of Roe’s reversal. Some people criticized his decision as vague, uncertain how Biden’s plans to ensure and expand access will be accomplished.

Biden’s order drew an array of responses, from those who consider it an infringement on the Supreme Court’s decision to others who view it as a step toward progress.

While some see a dark cloud looming over the future of abortion rights, Newman paused to applaud those working on the ground.

“There are just absolutely incredible people who are doing this work day in and day out at abortion clinics, at abortion funds, who I have so much faith in,” she said. “We’re going to figure out a way forward. It’s just, you know, I’m still feeling the sadness.”