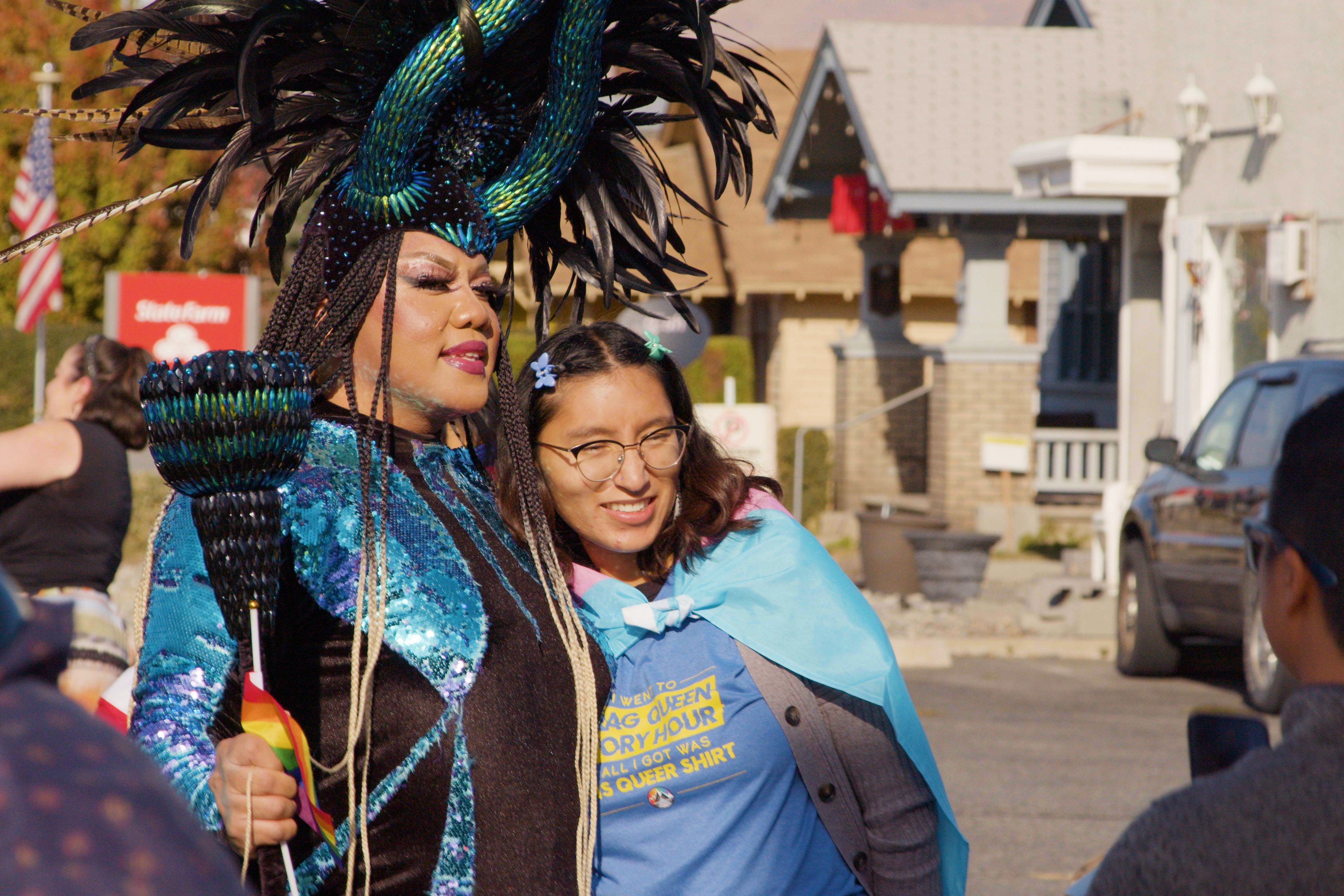 Connie Hung as Maleficent posing with Luz Estrada in the parking lot of the YWCA after the Drag Queen Story Hour on the morning of Oct. 29, 2022. (Photo by Oliver Lewis)

A car crash and a shouting match kicked off the protest and counter-protest over Wenatchee’s first Drag Queen Story Hour.

The fender-bender occurred as folks crossed the street to join a crowd of about 200 who gathered on the corner of North Mission Street and First Street. Most were there to support or attend the Oct. 29 event. But about 10 people were there to protest, holding signs with Bible quotes like ”Woe to those who steal and destroy the innocence of children,” a line from the gospel of Matthew.

The shouting occurred between one protester and YWCA supporters over how close people were getting to one another on the public sidewalk. Just feet away in the parking lot of the YWCA North Central Washington, a long line formed to get into the building. The YWCA was the organization that planned the Drag Queen Story Hour but had not originally intended to host it.

Once inside the building, dozens of families gathered in the cramped basement of the YWCA to hear two drag queens read storybooks for about an hour. Before they arrived, children busied themselves with coloring books and art supplies while sitting around two folding tables. Since there weren’t enough chairs for everyone, parents jostled for standing room along the periphery of the small space.

The Drag Queen Story Hour was originally set to take place at Pybus Public Market, Wenatchee’s equivalent to Pike Place Market. But three days before the event, Shon Smith, a candidate for Chelan County Commissioner, denounced the program in a post on Facebook. “The water was nice and cool when you placed your children in the pot,” he wrote on Oct. 26. Those words appeared above a flyer for the event, which included the original location and Pybus’ official logo. His post got nearly 2,000 comments and 86 shares, garnering backlash as well as quite a bit of discussion about contacting Pybus management and even individual vendors to protest.

Some commenters called for the arrest of the drag queens and anyone responsible for the event. The next day both Pybus Public Market and the YWCA were deluged with phone calls, emails, and direct messages on social media, as well as negative reviews and comments on posts having nothing to do with the event.

So on the afternoon of Oct. 27, the Pybus board of directors held an emergency meeting and voted to deny the use of the facility for Drag Queen Story Hour, even though the event had been on the schedule for months, according to the YWCA. The YWCA moved the Drag Queen Story Hour to its own building, which serves primarily as a homeless shelter, emergency food center and office space. 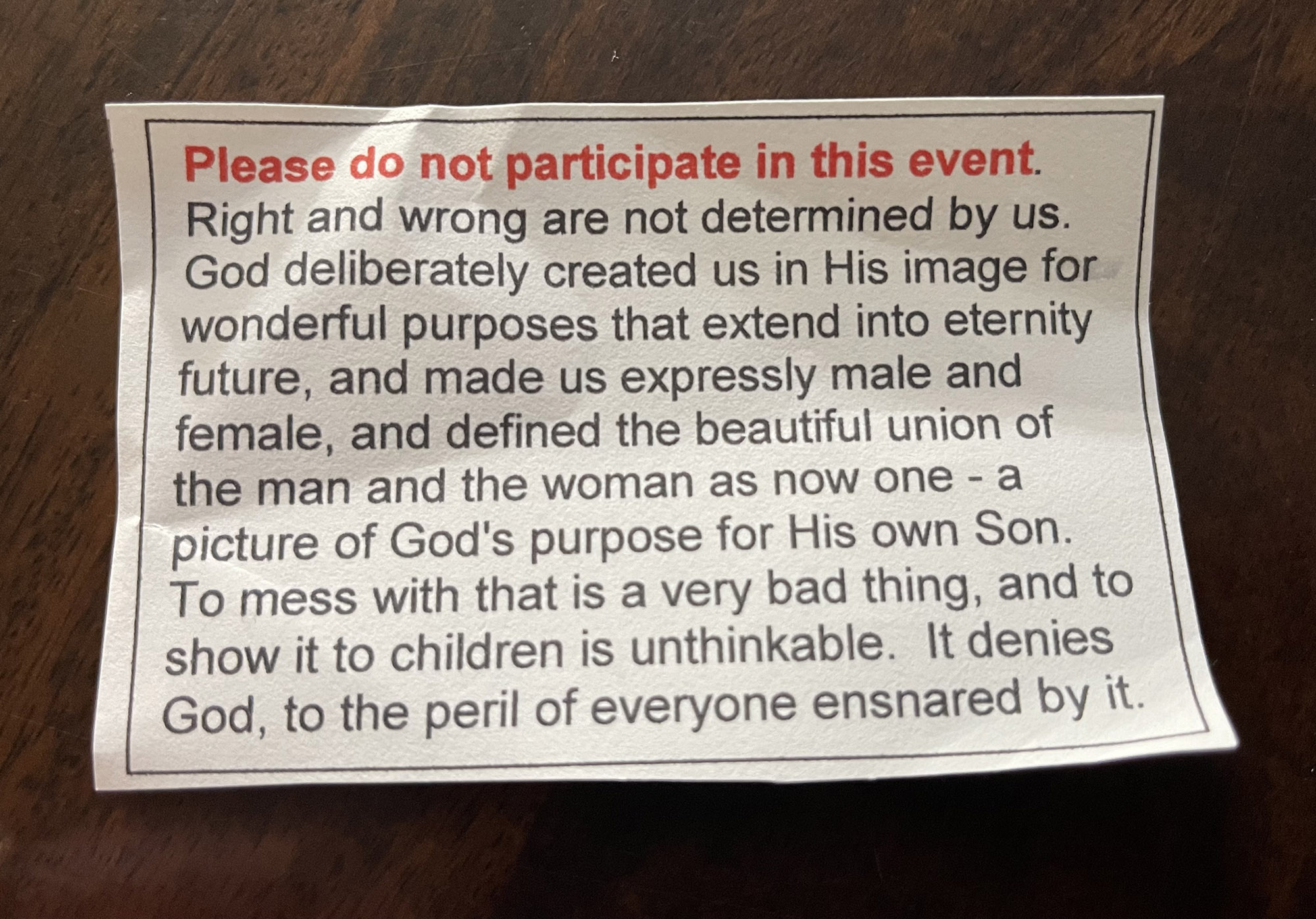 One of the cards David Croyle was distributing on the sidewalk in front of the YWCA. (Photo by Dominick Bonny)

One of the cards David Croyle was distributing on the sidewalk in front of the YWCA. (Photo by Dominick Bonny)

The decision prompted one Pybus board member and small business owner, Josh Tarr, to resign in protest. He explained his decision in a letter to fellow board members.

“It has been one of the greatest honors of my life to serve on the Pybus Board,” he wrote. “Although I only have two months remaining on my appointment, I find myself completely at odds with the recent board decision to cancel the YWCA event and can no longer in good conscience be associated with what I personally feel to be bigoted, archaic, and frankly, ignorant views of a universally and traditionally accepted art form (see Dustin Hoffman, Robin Williams, John Travolta, Tony Curtis, Jack Lemmon, Matthew Broderick, Tim Curry, etc.).”

Similar events in the Pacific Northwest have been marked by violence. At a Drag Queen Story Hour event in Eugene, Oregon, on Oct. 23, protestors and counter-protesters “lobbed projectiles,” including rocks and smoke bombs, at each other in the street outside the event, according to authorities. The violence in Eugene and the protest in Wenatchee are part of a spread of anti-LGBTQ+ rhetoric surrounding these story hour events across the country.

Smith didn’t show up to the Drag Queen Story Hour in Wenatchee – others did, however.

David Croyle, holding a sign that read “Pride Kills. Only Christ Gives Life,” was handing out cards urging people to “not participate in this event” because God made us “expressly male and female” and “to mess with that is a very bad thing.”

He spoke about the event as an affront to God and said he believed it exposed children to sexual immorality and that he objected to men dressing as women. 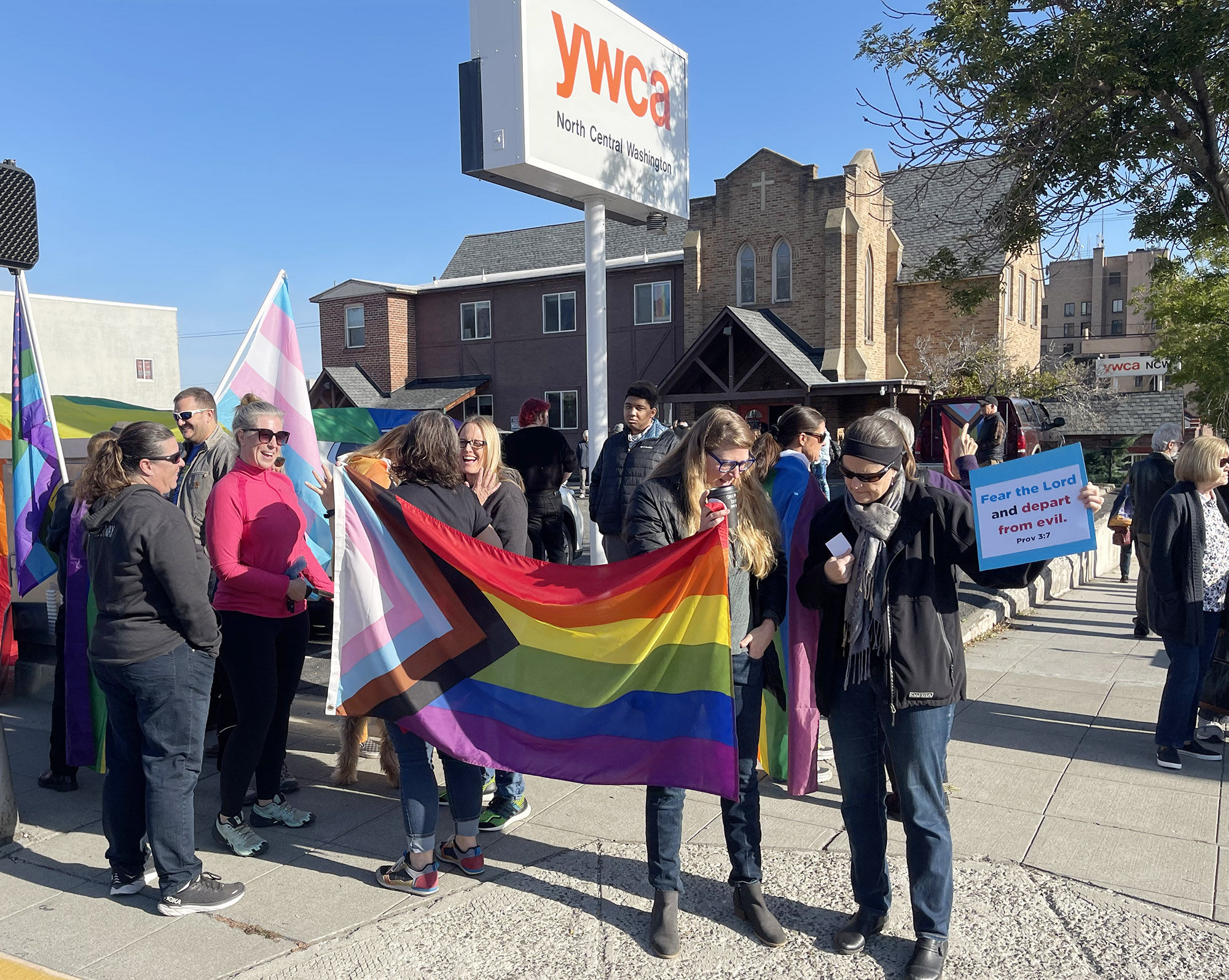 A protester and a YWCA supporter talk on the corner of North Mission Street and First Street in Wenatchee. After some initial tension, the two groups settled into relatively amicable relations and discussed issues with no further incident. (Photo by Dominick Bonny)

A protester and a YWCA supporter talk on the corner of North Mission Street and First Street in Wenatchee. After some initial tension, the two groups settled into relatively amicable relations and discussed issues with no further incident. (Photo by Dominick Bonny)

Randy Cagle agreed and added that they were just there to love. He also said no one has to listen or do what they say.

”We’re not spokesmen for God and that we can tell everyone what God thinks – we get it out of the Bible,” he said. “And the Bible is slowly being rejected out of our culture. God is being pushed out of our culture. We all can agree on that. And this is just a pedal-to-the-metal movement, and there has to be some that stand up and say, ‘Please don’t do that.’ It’s not good for you.’ I’ll be OK.”

One drag queen who read at the story hour wanted to set the record straight about what Drag Queen Story Hours are and what they are not. Jonathan Sullivan, a Chelan-based drag queen who goes by the stage name “Connie Hung,” pushed back on the idea that these events are designed to sexualize or “groom” children.

She said she has been participating in Drag Queen Story Hours since before they were brought up by high-profile figures in the right-wing media ecosystem and became flashpoints in the culture wars. Hung said the reason she participates in these events isn’t to push some political agenda but rather to show children it’s OK to practice an art form like hers and to simply normalize self-expression.

“It’s so close to my heart because I grew up in the area, like Bridgeport, Lake Chelan, and stuff,” she said. “And so being queer when I was young, had I had the chance to even see a drag queen doing this, it would have changed my whole perspective in life.”

By the time the Drag Queen Story Hour in Wenatchee was underway, the protesters and counter-protesters remaining outside the event had settled into a fairly amicable cohabitation of the sidewalk. Some were even dialoguing politely about their differences of opinion – the emotions of the online debate seemed to dissipate under the reality of face-to-face interaction. 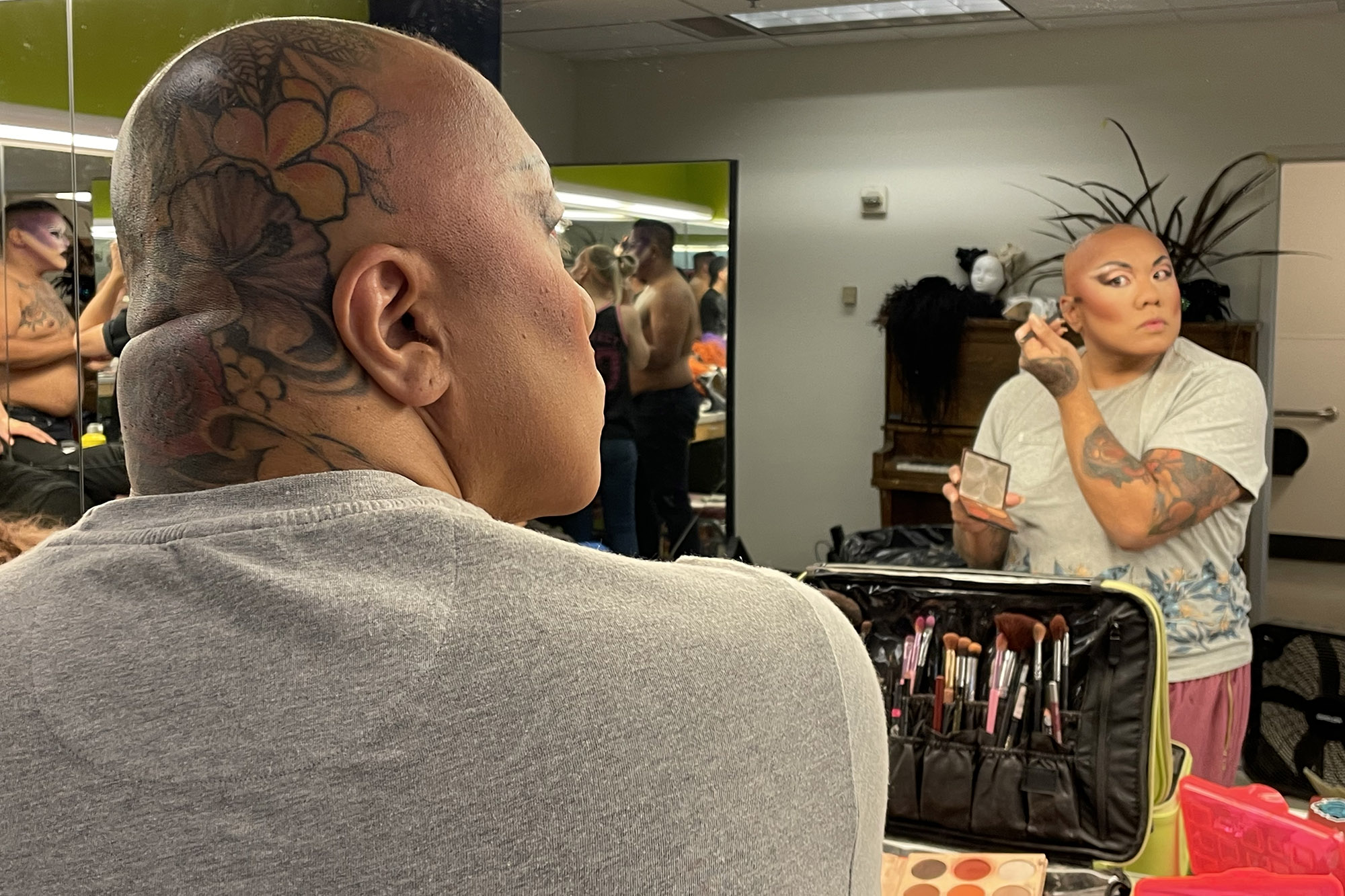 Connie Hung prepares for Wenatchee's contentious but, as it turned out, fortunately nonviolent Drag Queen Story Hour on the morning of Oct. 29, 2022. (Photo by Oliver Lewis)

Connie Hung prepares for Wenatchee's contentious but, as it turned out, fortunately nonviolent Drag Queen Story Hour on the morning of Oct. 29, 2022. (Photo by Oliver Lewis)

Inside, the drag queens read books like I Love My Body Because and Gustavo, the Shy Ghost to a full house, the controversy online apparently fueling more interest in the event.

“Our space downstairs has the capacity for about 100, and it’s packed,” said YWCA Executive Director Rachel Todd. “It is wall-to-wall packed down there.”

Tess Davison, a longtime Wenatchee Valley resident, said she hadn’t heard of the event until the controversy arose and decided to bring her two sons, ages 4 and almost 2, to the event because of it.

“Because there was hoopla, we were able to actually find out about it and made sure we were coming and told our friends about it and are bringing more people because of it,” she said.

Davison said she and her husband believe in exposing their kids to all the “right things.” They want to teach their boys to accept all people and to create empathy and respect for diversity. She said they also want to teach them to expect diversity in this changing community.

“This community is beautiful, and we’re all lucky to live here,” she said. “But only if we continue to push it forward and to foster respect and to foster openness and to really love.”

Scott Hess and his family moved to the Wenatchee Valley four months ago and were already planning to attend the Drag Queen Story Hour with their two children, but he said they became more enthusiastic about their decision after seeing the backlash.

“Initially, we were just coming because we thought it would be a fun family thing to do, and then once we heard about it getting moved, we were more motivated to support an inclusive community,” he said.

He said he thinks everyone has a right to feel safe in their community, and that that shouldn’t be controversial.

“If we’re all about freedom, everyone should be able to exercise their freedom,” Hess said.

Todd at the YWCA said she’s worried about Smith winning a county commissioner seat and targeting the YWCA for budget cuts. She said that could impact some of the community’s most marginalized people down the road – those who utilize the YWCA’s emergency and transitional housing services.

“I’m a little worried because it sounds like he’s going to get elected as commissioner and the commissioners have a lot of sway over a big chunk of our funding, which is a bummer,” Todd said.

Todd said the funding the YWCA gets from the U.S. Department of Commerce to provide housing for low-income individuals and those with special needs is facilitated by the county commissioners. She worries that funding could be in jeopardy if Smith is elected.

But Smith said that if he wins he has no intention of cutting the YWCA’s funding.

“What they do inside their walls, it’s up to them,” he said. “That was the whole point with my post was making it so that only intentional eyes were present, not unintentional participants.”

The state of Smith’s race is still up in the air. As of the most recent ballot count, he’s 143 votes ahead of his opponent. But there are still 5,922 votes left to count, and the next update from the Chelan County Auditor’s office will be on Nov. 15. 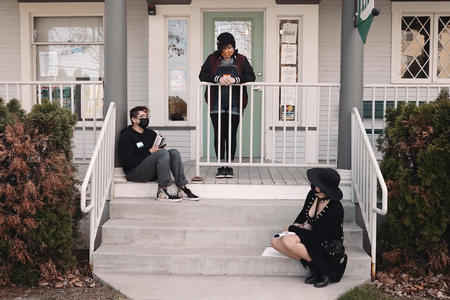 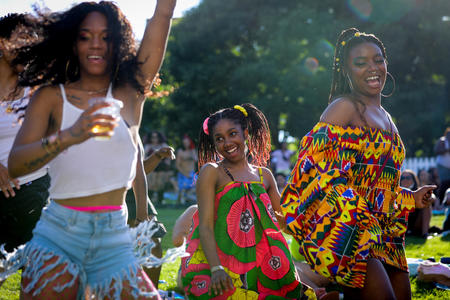