Fighting fire with fire to save Washington's forests

After over a century of fire suppression, the U.S. Forest Service is using prescribed burns as a way to reduce the risk of megafires. 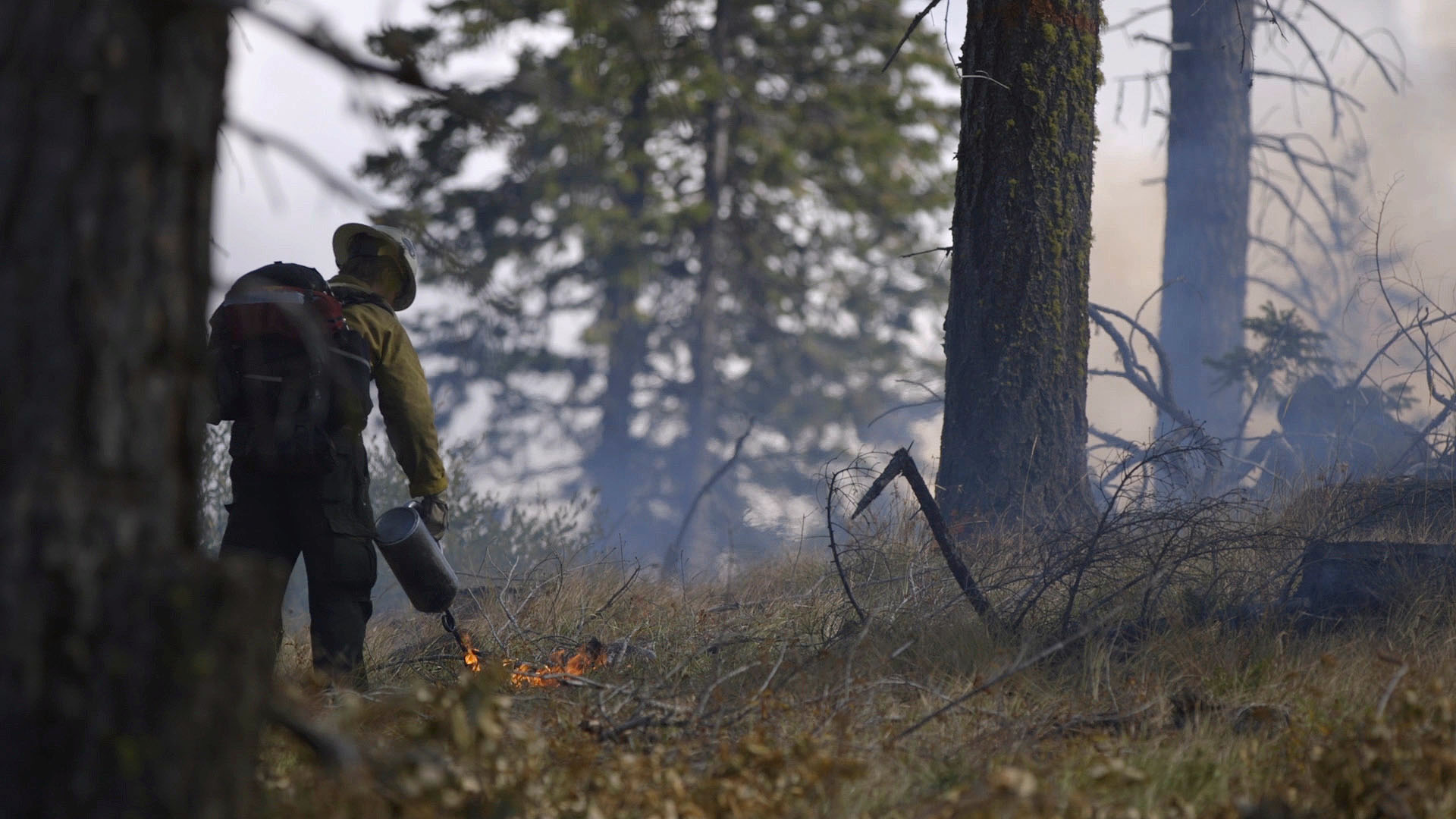 A wildland firefighter uses a handheld drip torch to ignite grasses and other fuels on the forest floor in the Okanogan-Wenatchee National Forest. The U.S. Forest Service conducts prescribes burns each year to reduce the risk of future megafires.

That doesn’t stop locals from expressing concern. After several summers of darkened skies, Washingtonians are a little on edge at the sight of any smoke. “Smoke is hard on a lot of people,” DeMario says.

But not all fires are created equal. The burns conducted by firefighters each year, starting about mid-August, help manage wildfire risk and promote healthier forests. There’s even a hashtag, #goodfires, that national forests looking to implement these prescribed burns in recent years are using to help the public realize fire’s benefit.

Fire always has been a natural part of the dry forests on Washington’s east side (traditionally more so than the west side forests, although Forest Service spokesperson Stephen Baker says they’re interested in expanding). Natural burns ensured that flammable vegetation wouldn’t accumulate, making megafires less likely, and before European settlers arrived in Washington, Native people in the Northwest used fires to help manage resources like food and keep vegetation healthy.

“If you look at some of the historical writings from that time period, they write about being able to take their wagons through the forests,” DeMario says, citing settlers’ journals. “The space in between trees was wide enough so that settlers could bring their wagons … through the trees.”

But European settlers unaccustomed to the ecosystem or Native practice largely replaced the practice of intentional burning with fire suppression. It took until the latter half of the 20th century for that to change. Holly Krake, an Okanogan-Wenatchee National Forest spokesperson, says local governments have come to recognize the positive role that fire plays in the environment.

“A lot of folks in fire and land management would point to large fires in the late ’80s in Yellowstone — that was a watershed moment, where elected officials said, ‘Whoa, is this a moment where we need to think differently about the role fire could play?’ ” she says. “Here, we’ve been using prescribed fire for more than a decade. We need to increase the pace and scale.”

Washington has done that: A report released by the Coalition of Prescribed Fire Councils last year found that the use of prescribed burning in the West has increased steadily. Baker says the Forest Service is interested in increasing the number even further throughout the state's national forests. That's especially the case in Eastern Washington’s dry forests, which he says “evolved with periodic, low-intensity fire” and are more likely to catch fire now. This year, the Forest Service plans to burn over 11,000 acres of forest from the Canadian border to south of Yakima, as conditions allow. While burns can begin in August, they usually end in mid-October, or when the forest becomes too wet for burns to continue.

On a recent visit to the site of a prescribed burn, a group of firefighters set fire to small dry patches around a forested area with fallen trees. Small flames crackled across the forest understory, adding to previous clearings made by cutting and burning from previous treatments, creating space between the trees.

Michael Barajas, a Forest Service assistant fire management officer who helps oversee and plan prescribed burns, says there are a number of different ways to go about burning. Firefighters can set fire to the understory with handheld drip torches or simply light up stacks of large flammable natural debris called “slash piles.”

Barajas helps develop prescriptions for different parts of the forest, saying that the Forest Service chooses methods based on the needs of a particular area. This could be a part of the forest that’s seen significant buildup of flammable natural materials, or perhaps is overcrowded in a way that’s unhealthy for the trees within it.

“It blew up. It was racing downhill under red flag conditions to Winthrop,” she says. “It hit those treatments and laid down. It was credited with saving the community of Winthrop.”

Looking back at this year’s gentler fire season, Barajas says not much has changed in terms of how firefighters implement the prescribed burns, aside from the occasional controversy around it.

“It can be controversial when [people] see a wildfire and we’re burning concurrently or shortly thereafter,” he says. It’s part of the reason that the “prescriptions” he makes for different parts of the forest also account for smoke dispersion and planning burns when they’ll be the least disruptive to neighboring communities.

In the long run, DeMario says that the benefits of these burns outweigh the burden of temporary smoke. If they can help mitigate megafires in the future, that means less smoke during summer.

Beyond helping keep summer smoke down and curtailing the risk of megafires, over time the prescribed burns offer benefits that could cascade through ecosystems far from the forest itself.

“It does more than just help forest health — it’s increasing watershed functions, wildlife habitat and protecting communities,” Krake says. “We have an emerging science that shows how [wildfires] burn, and how hot they burn, directly impacts salmon and steelhead, which are then the critical food source for orcas in the sound. How things play out on the east can [eventually] play out on the west.”

Ted Alvarez contributed to this reporting. The spelling of Holly Krake's name has also been corrected.